Ofloxacin (OFL), (±)-9-fluro-3-methyl-10-(4-methyl- 1-piperazinyl)-7-oxo-2,3-dihydro-7H-pyrido [1,2,3-de]- 1,4-benzoxazine-6-carboxylic acid, exhibits good in vivo and in vitro activity against gram positive and gram negative bacteria [1]. Ornidazole (ORN), 1-chloro- 3-(2-methyl-5-nitroimidazole-1-yl)propan-2-ol, is a derivative of nitroimidazole, with antiprotozoal and antibacterial properties. It is used in the prevention and treatment of infections due to anaerobic germs. The drug is specifically useful in abdominal and gynecological surgery [2].

In present paper, we report the HPLC and HPTLC methods for simultaneous determination of OFL and ORN in pure laboratory mixture and in tablet dosage form and their comparison. Combinations of ORN and OFL in solid dosage form are marketed in India as antiprotozoal and antibacterial. The marketed formulation selected for present study was Oflox OZ of Cipla Ltd., Jaipur, India.

The mobile phase was filtered through Whatman filter paper No. 41 and degassed prior to use. The elution was monitored at 318 nm. The injection volume was 20 μl.

Solutions of the test substance were applied to silica gel 60 F254 TLC plates. The plate was placed in a chromatographic tank previously saturated for 10 min with developing mobile phase; dichloromethane:methanol:25% ammonia solution (9.5:1:3 drops v/v). The plate was developed by normal vertical developing tank at ambient temperature for a distance of 90 mm. the spots were detected under a UV lamp and scanned densitometrically at 318 nm.

Accurately weighed amount of standards of OFL (100 mg) and ORN (250 mg) were transferred to 100 ml volumetric flask, separately and dissolved into and diluted up to the mark with methanol. The resulting solutions were sonicated for 15 min and filtered through Whatman filter paper No. 41. All solutions were prepared freshly.

An aliquot portion of the standard stock solution of OFL and ORN were further diluted with mobile phase to get the series of concentration of 2-40 μg/ml for OFL and 5-100 μg/ml for ORN. 20 μl of each solution was injected under operating chromatographic conditions described above. Calibration curve was constructed by plotting peak areas versus concentration and the regression equation was calculated.

An aliquot portion of standard stock solution of OFL and ORN were further diluted to get 0.01 μg/ml for OFL and 0.025 μg/ml for ORN. Each solution was applied as band ranging from 2-20 μl on TLC plate with Linomat V. The plate was developed in twin trough glass chamber under operating conditions described above. After development the plate was air dried and evaluated densitometrically at wavelength of 318 nm. Calibration curve was constructed by plotting peak areas versus concentration and the regression equation was calculated.

A solvent system that would give dense and compact spots with appropriate and significantly different Rf values was desired for quantification of combination by HPTLC. The mobile phase consisting of dichloromethane:methanol:25% ammonia solution (9.5:1:3drops v/v) gave the mean Rf value of 0.16 and 0.56, 0.78 (isomers), respectively for OFL and ORN. In HPLC conditions were optimized to obtain an adequate separation of eluted compounds. Initially, various mobile phase compositions were tried, but only acetonitrile:methanol:0.025 M phosphate buffer, pH 3.0 (30:10:60 % v/v/v) as the mobile phase at a flow rate of 1 ml/min at ambient temperature was found to give desired separation between OFL and ORN. The average retention times for OFL and ORN was found to be 4.04 min and 5.83 min, 6.77 min (isomers), respectively. Quantification was achieved in HPTLC as well as in HPLC with UV detection at 318 nm. Typical chromatograms for OFL and ORN for marketed formulations are shown in Figs. 1 and 2. 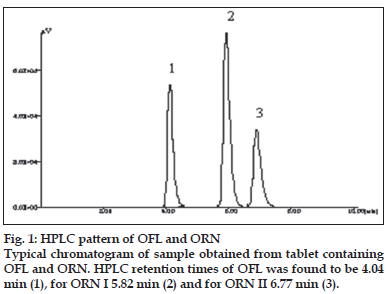 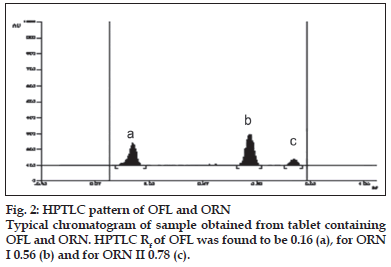 The developed method was validated in terms of linearity and range, limit of detection, limit of quantification, recovery study, and inter day study,intra day study and study by different analysts. The linear regression data in HPTLC showed a good linear relationship over a concentration range 50-250 ng/spot for OFL and 20-100 ng/spot for ORN. The correlation coefficients obtained were 0.9994 and 0.9989 for OFL and ORN, respectively. Repeatability of method was determined by six times spotting 10 μl of standard drug solution on TLC plate, after development the separated spots were scanned six times without changing position, measurement of peak areas was performed and from the peak areas the % RSD was determined. For OFL and ORN % RSD was found to be 0.0086 and 0.0063, respectively

System suitability tests are used to verify the reproducibility of the chromatographic system. To ascertain effectiveness of HPLC method, system suitability tests were carried out on freshly prepared standard stock solutions. The parameters obtained are shown in Table 1. The calibration curve was linear in concentration range of 2-40 μg/ml and 5-100 μg/ml, with regression 0.9994 and 0.9913, slope 0.6165 and 0.4314 for OFL and ORN, respectively.

*Mean of five determinations. OFL for ofloxacin; ORN I and II for isomer of ornidazole

Recovery studies were carried out to study accuracy and precision of the method. In HPTLC, these studies were carried out on plate at three levels i.e.multiple level recovery studies. Two microlitres of pre-analyzed sample preparation having concentration of 0.050 μg/μl for OFL and 0.125 μg/μl of ORN was applied three times on TLC plate as a band of 6 mm. These bands were spiked on plate with OFL and ORN standard stock solution and analyzed by the method. In HPLC, recovery study was carried out at 80%, 100% and 120% level. To the powder formulations the pure standard drugs were added and dilutions were made and analyzed by the method. The % recovery was calculated by using formula, % recovery = (T-A)/S×100 where, T is total amount of the drug estimated, A is the amount of drug contributed by tablet powder and S is the amount of pure drug added. The result of recovery studies for both OFL and ORN by both HPLC and HPTLC was found to be around 99-100%, indicating that the methods are free from interference from excipients (Table 2).

Sample to sample precision and accuracy by both the techniques were evaluated using, three samples of three different concentrations, which were prepared and analyzed on same day. Day to day variability was assessed using three samples of three different concentrations analyzed on three different days, over a period of one week. The results show the accuracy and reproducibility of the assay. Thus, it was concluded that there was no significant difference on the assay, which was tested on an intra-day and inter-day basis. The % RSD values shows that proposed method provides acceptable intra-day and inter-day variation for OFL and ORN (Table 3).

From the above results it can be concluded that the HPTLC method is simple, accurate, most economic and less time consuming technique while RP- HPLC method is most accurate, precise, specific and very sensitive and can be used for routine analysis of OFL and ORN in their combined dosage form.

Authors are very thankful to Anchrom Labs, Mumbai, India for their valuable cooperation and guidance to carry out study on HPTLC.