In this study, a rapid, precise, accurate, specific and sensitive ion-paired reverse phase liquid chromatographic method has been developed for the simultaneous estimation of nebivolol hydrochloride and valsartan in their capsule formulation. The chromatographic method was standardized using a HIQ sil C 18 column (250×4.6 mm i.d., 5 µm particle size) with UV detection at 289 nm and flow rate of 1 ml/min. The mobile phase consisting of methanol:water (80:20 v/v) with addition of 0.1 percent 1-hexanesulfonic acid monohydrate sodium salt as an ion-pairing reagent was selected. The method was validated and produced accurate and precise results for estimation of the two drugs. 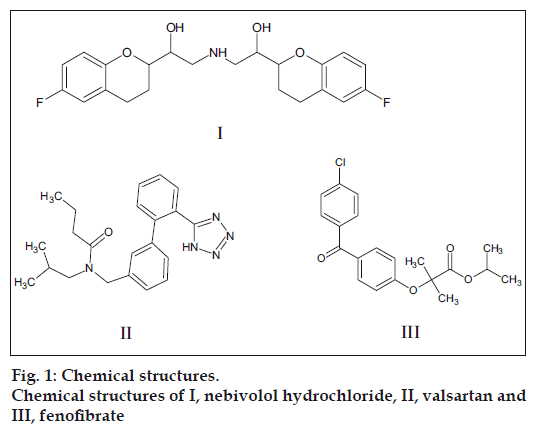 The HPLC system used was a computer based Jasco series instrument comprising of a pump PU-2080 and a UV detector UV-2070. Manual injections were carried out using a Rheodine injector with a fixed 20 μl external loop. The chromatographic separations were performed on a HIQ sil C18 ODS column (250×4.6 mm i.d., 5 μm particle size), operating at ambient temperature, using a mobile phase consisting of methanol:water (80:20 v/v) with addition of 0.1 percent 1-hexanesulfonic acid monohydrate sodium salt as an ion-pairing reagent. The mobile phase was filtered through 45μm nylon membrane filter. A Shimadzu AY 120 analytical balance was used for weighing. A PCi ultrasonicator was used for sonication. Mobile phase was used for preparation of drug samples throughout the analysis.

The solutions having concentrations of 10-250 μg/ml of NEB and 160-400 μg/ml of VAL were prepared by proper dilutions of primary stock solutions of pure drugs with mobile phase to obtain working standards. To each 10 ml volumetric flask 0.4 ml of FEN was added as an internal standard and the final volume was made up with the mobile phase. A 20 μl of sample solution was injected into the chromatographic system using fixed volume loop injector and chromatograms were run for 15 min acquisition. The flow rate was maintained at 1 ml/ min at ambient temperature and the eluents were monitored at 289 nm. The separation was done on a C18 column using developed mobile phase which contains methanol:water (80:20 v/v) with 0.1 percent 1-hexanesulfonic acid monohydrate sodium salt.

Marketed capsule formulation containing a NEB 5 mg and VAL 80 mg was procured from a local pharmacy and was analyzed using this method. Twenty capsules of formulation were accurately weighed and average weight calculated. The capsule shell was then opened to collect two tablets and triturated. An accurately weighed triturated powder equivalent to 5 mg of NEB and 80 mg VAL of the formulation was transferred to a separate 50 ml volumetric flask containing 25 ml of mobile phase. Prepared solution was sonicated for 10 min for proper solubilization of the drug and final volume was made up to 50 ml with mobile phase. This solution was then filtered through Whatman filter paper No. 41. Three aliquots in suitable concentration were prepared in triplicate to get nine solutions. Each solution was filtered through hydrophilic PVDF 45 μm size syringe filter. Filtered aliquots were analysed using proposed method.

Accuracy of analysis was determined by performing recovery studies by spiking different concentrations of NEB and VAL in the pre analyzed formulation samples within the analytical concentration range of the proposed method.

An ion-pair RP-HPLC method was developed for estimation of NEB and VAL, which can be conveniently employed for routine quality control in pharmaceutical dosage forms. The chromatographic conditions were optimized in order to provide a good performance of the assay. In order to affect the simultaneous elution of the two components under isocratic conditions, different chromatographic conditions (organic modifier, flow rate, ionic strength, and pH) were investigated. RP-HPLC system consisting of HIQ sil C18 column (250×4.6 mm i.d.) provided good resolution for separation of NEB and VAL. Initially the mobile phase for the two drugs was selected based on its polarity. Mobile phase containing methanol alone or acetonitrile alone was found to elute the two compounds unresolved. Various ratios of methanol:acetonitrile:water were found to produce chromatograms with very close retention times. The cationic nature of NEB produced broad asymmetrical peaks with aqueous-organic mobile phases due to the ionic interaction of the charged solutes with the free silanol groups on the alkyl bonded reversed phase packings. Use of ion-pairing agents like 1-hexanesulfonic acid monohydrate sodium salt and quaternary amine like triethylamine is found to improve separation chromatographic peaks and decrease their asymmetries. Taking the above phenomenon into account for this analysis 0.1 percent 1-hexanesulfonic acid monohydrate sodium salt was selected and better resolution was achieved when the concentration of ion-pairing regent was maintained between 0.1-0.2 percent. Best resolution was achieved at the mobile phase composition of methanol:water in the ratio of 80:20 v/v with 0.1% 1-hexanesulfonic acid monohydrate sodium salt, where the peaks of NEB, VAL and FEN were distinctly resolved. Flow rate of 0.5 ml/min resulted in greater retention times and 1.2 ml/min resulted in very close retention times with poor resolution. A flow rate of 1 ml/min resulted in elution of all drugs within 15 min with good resolution. 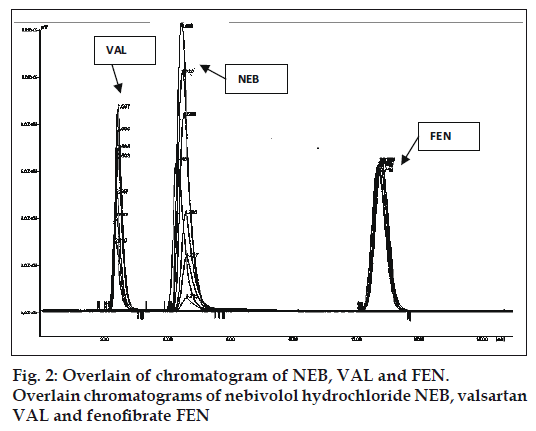 The system suitability parameters such as theoretical plates, asymmetry, capacity factor, tailing factor and resolution were found to be 1544.14 and 1906.56, 1.48 and 1.65, 465.00 and 257.50, 1.27 and 1.24, 4.91 and 5.96 for NEB and VAL, respectively. The method was specific as none of the excipients interfered with the analytes of interest. The proposed method was applied to the determination of NEB and VAL in their pharmaceutical preparation. The results indicate satisfactory accuracy and precision of the method.

The accuracy of proposed method was determined by investigating the recovery of NEB and VAL at three levels, ranging from 80 to 120% of the theoretical concentration, from placebo mixtures spiked with active substances. It showed mean percent recovery of 99.05±1.01 for NEB and 99.08±1.05 for VAL.

The developed method can be suitable for the determination of NEB and VAL in concentration range 10-250 μg/ml and 160-400 μg/ml, respectively. The specificity was determined by comparing test results from the analysis solutions containing active substances. The method allows active compounds to be separated and thus established that it is suitable or specific for desired separation. The stability of solution has been demonstrated by analysing solution of NEB and VAL after 16 h if stored at room temperature; the method is thus suitable for automation. From above data we have concluded that the proposed method is accurate and precise and can be applicable for the in process quality control for determination of NEB and VAL in pharmaceutical preparations.