A novel high performance liquid chromatography-mass spectrometry method for simultaneous determination of loganin, morroniside and paeoniflorin in rat plasma was developed, validated and applied to pharmacokinetic study of Liuwei Dihuang pills. Samples were prepared by liquid-liquid extraction with ethyl acetate. Separation was performed on a Wondasil C18 column (150×4.6 mm, 5 μm) using a mixture of methanol and 0.02 % formic acid water solution (28:72, v/v) as the mobile phase. The flow rate and column temperature were set at 0.7 ml/min and 30°. The compounds were detected in selected ion monitoring mode using an ESI source in the negative mode. The method was linear over the ranges of 5-1000 ng/ml for the three analytes, with all determined correlation coefficients exceeding 0.993. All of the lower limits of quantification of the three analytes were 5 ng/ml. The intra-day and inter-day precisions were less than 7.50 %, and the accuracy ranged from –6.57 to 7.90 %. The mean recoveries of the analytes were higher than 68.86 %, and the matrix effects were between 92.35 and 103.54 %. This method was simple, sensitive and reliable, and could be used to monitor pharmacokinetics of loganin, morroniside and paeoniflorin. Moreover, this study might be helpful for quality control and guiding the clinical application of Liuwei Dihuang pills.

Traditional Chinese medicine (TCM) and its preparations have been used in China for thousands of years and have become increasingly popular around the world in recent years because of their special efficacy, low toxicity and fewer side effects [1,2]. In the practice of TCM there are few herbal drugs being used alone. Conversely, formulae consisting of several drugs is the dominant administration mode. The complexity of active components and the lack of conclusive drug mechanisms make it difficult to be recognized by other countries. Pharmacokinetic studies of major active ingredients provide a suitable way to well understand the mechanism of drug effects, which are of importance to evaluate and improve the efficacy and safety of TCM.

Liuwei Dihuang (LD) is a well-known classical traditional Chinese formula, which has been clinically used for the treatment of kidney-Yin deficiency syndrome under TCM prescriptive terms in China for a long time [3], which includes symptoms of soreness of the loins and the limbs, dizziness, tinnitus, and sweating. The formulation consisted of six Chinese herbal ingredients, including Radix rehmannide preparata, Rhizoma Dioscoreae, Fructus corni, Cortex moutan, Rhizoma alismatis and Poria. According to recent pharmacological studies, LD is effective in maintaining neuroendocrine immunomodulation balance [4,5], improving cognitive function [6,7], and improving or restoring the symptoms associated with aging and geriatric diseases [8]. Phytochemical investigation has found that LD contains many constituents including glycosides, phenols, acids, tannins and so on. Among these, glycosides, such as loganin, morroniside and paeoniflorin, are considered as the major bioactive constituents most contributing to the pharmacological efficacy of LD. Therefore, for further development and rational use of LD, it is important to develop a method for quantitative analysis of loganlin, morroniside and paeoniflorin in vivo and study the pharmacokinetics of LD.

Till date, several papers have described high performance liquid chromatography (HPLC) methods for determination and pharmacokinetic studies of loganin [9], morroniside [10] and paeoniflorin [11] independently, but it is more important to simultaneously determine these bioactive components in biological samples as much as possible due to the complexity of ingredients in herbal medicines. A few articles reported HPLC [12] or ultra-performance liquid chromatography-mass spectrometry (UPLCMS) [13] methods for the simultaneous determination of loganin and morroniside in mouse or rat plasma after intravenous or oral administration of Cornus officinalis. However, there are no reports available on the simultaneous determination and pharmacokinetic study of loganin, morroniside and paeoniflorin in rat plasma after oral administration of LD pills. Therefore, in the present study, a sensitive, specific and accurate HPLC-MS method for the simultaneous determination of loganin, morroniside and paeoniflorin in rat plasma was established, validated and successfully applied to the pharmacokinetic study of LD pills in rats.

Sample analysis was performed on an Agilent 1200 series HPLC system and Agilent 6410 Triple Quadrupole mass spectrometer equipped with an electrospray ionization source (Agilent technologies, USA). All data were processed with the MassHunter B_01_04 software. The separation was achieved on a Wondasil C18 column (150×4.6 mm, 5 μm, GL Sciences Inc., Japan) at 30°. The mobile phase was a mixture of methanol-0.02 % formic acid water solution (28:72, v/v), which was pumped at a ﬂow rate of 0.7 ml/min. The injection volume was 10 μl. The ESI source was set to negative ion mode using the following parameters: capillary voltage 4000 V, desolvation gas (nitrogen) heated at 350° (9 l/min), nebulizer pressure 50 psi. The fragment voltages were 110 V for loganin, morroniside and IS, and 100 V for paeoniflorin. The quantification was performed in the selected ion monitoring (SIM) mode at m/z 435.2 for loganin, m/z 451.2 for morroniside, m/z 525.2 for paeoniflorin, and m/z 327.1 for IS.

LD pills were ground to a powder and dissolved in 0.4 % carboxymethylcellulose sodium (CMCNa) solution. The content of loganin, morroniside and paeoniflorin determined by a HPLC method [14] developed and validated by our lab was 1.44, 1.87 and 0.99 mg/g, respectively.

Stock solutions were independently prepared by dissolving 10.02 mg loganin, 10.04 mg morroniside, 10.03 mg paeoniflorin and 1.00 mg bergenin (internal standard, IS) in 10 ml methanol. A series of mixed standard working solutions (10000, 1000 and 100 ng/ml) were prepared by appropriate dilution of their respective stock solutions with methanol. The IS working solution was prepared at a final concentration of 100 ng/ml in methanol.

Appropriate volumes of mixed standard working solutions were added to a 10 ml plastic tube, and evaporated to dryness at 40° under a gentle stream of nitrogen. Then 100 μl of rat plasma was added to the tube to obtain the calibration standards. The concentrations of calibration curves of loganin, morroniside and paeoniflorin were all 5, 10, 50, 100, 250, 500 and 1000 ng/ml. The QC samples were similarly prepared at low, medium and high concentrations of 10, 100 and 750 ng/ml for the three analytes. All the prepared solutions were kept at 4° and brought to room temperature before use.

One hundred microlitres of plasma was mixed with 10 μl IS solution (100 ng/ml) and 3.5 ml ethyl acetate. The mixture was vortexed for 2 min and centrifuged at 5000 rpm for 5 min. The organic layer was transferred to another tube, and evaporated to dryness in a thermostatic water bath at 40° under a gentle stream of nitrogen. The residue was reconstituted with 100 μl methanol-0.2 % formic acid water solution (28:72, v/v). And 10 μl of the solution was injected for analysis.

The analytical method was validated for its selectivity, calibration curve, lower limit of quantification (LLOQ), accuracy, intra- and inter-day precision, extraction recovery, matrix effect and stability according to the Food and Drug Administration guidelines [15]. The selectivity of the method was investigated by analysing six individual blank rat plasma samples. The chromatographic findings of each blank plasma were compared with the spiked rat plasma containing loganin, morroniside, paeoniflorin or IS and rat plasma after oral administration of LD pills to check for interferences.

Calibration curves were prepared by assaying standard plasma samples at seven different concentrations. The linearity of each calibration curve was determined by plotting the peak area ratio (y) of the analyte to the IS against the nominal concentration (x) of the analyte with weighted (1/x2) least squares linear regression. The LLOQ was determined at the lowest concentration point of the calibration curve. Its measured precision, expressed as the relative standard deviation (RSD %), was within ±20 %, and its accuracy, expressed as relative error (RE %), was also within ±20 %.

The stability of the three analytes in rat plasma was studied by analysing five replicate QC samples at three different concentrations under different storage conditions including: storage at room temperature for 6 h after extraction, storage at –20° for 1 day and 7 d and after 3 freeze/thaw cycles. All QC samples were determined by using a calibration curve plotted daily. The analytes were considered stable with the deviation from the nominal concentration within ±15 %.

Application to a pharmacokinetic study:

Male Wistar rats weighing 280 to 320 g were obtained from the experimental Animal Center of Shandong University, animal certification number was SCXK(Lu)20090001. All animals were housed under standard conditions of temperature, humidity and light with food (laboratory rodent chow) and water provided ad libitum and were acclimated in the laboratory for at least one week prior to experiment. Before administration, the animals were fasted overnight with free access of water. Pooled drugfree plasma was obtained from healthy rats and used for preparing calibration curves and QC samples. All of the experiments were carried out according to the Guidelines for the Care and Use of Laboratory Animals, and were approved by the Animal Ethics Committee of Shandong University (Jinan, China).

Initially, the previously developed HPLC method [14] reported from our laboratory for determination four ingredients in LD pills was adopted to determine loganin, morroniside and paeoniflorin. But, at the end, HPLC-MS method was employed in this study since the sensitivity of HPLC instrument could not meet the analytical requirement to detect the low plasma concentration of the three analytes in rats. To obtain the best mass spectrometry conditions, the standard solutions of the three analytes and IS were separately infused into the mass spectrometer, and were studied in both positive and negative ion modes. The results showed that the response of the analytes was much stronger in negative ion mode than that in positive ion mode. Due to the instability and low ion response, no product ion of the analytes could be used for quantification. So the SIM mode and precursor ion were used for quantification because of the high response, which could satisfy the requirement of the detection. The selected precursor ions were as follows: m/z 435.2 for loganin, m/z 451.2 for morroniside, m/z 525.2 for paeoniflorin, and m/z 327.1 for IS. The full scan mass spectrometry with the information of fragmentation pattern is shown in figure 1. The fragment voltages for each analyte were further optimized, which were 110 V for loganin, morroniside and IS, and 100 V for paeoniflorin. In order to minimize the matrix effect and increase the extraction recovery, liquid-liquid extraction (LLE) and protein precipitation (PPT) were compared for sample preparation. PPT method (methanol or acetonitrile as precipitant) was not selected because of its high MS noise level, while LLE could produce a clean and concentrated sample. Different organic extracting solvents, including acetone, chloroform and ethyl acetate, were used, and ethyl acetate could offer satisfactory extraction efficiency for the analytes and IS.

A suitable IS is crucial for biological sample analysis, controlling for the variability in the extraction, HPLC injection and ionization. Bergenin was chosen as the IS because it exhibited a good response, peak shape and appropriate retention time. And no significant direct interference was observed.

Six blank plasma samples respectively from six rats were used to investigate the selectivity of the method. Typical chromatograms obtained from blank plasma, spiked plasma sample with the analytes (100 ng/ml) and IS, and plasma sample collected after 45 min after oral administration of LD pills are shown in figure 2. All the analyte and IS peaks were detected with excellent resolution and good peak shapes, and no interference from the endogenous substances was observed at the retention time of the analytes and the IS. The retention time of loganin, morroniside, paeoniflorin and IS was 16.5, 8.4, 18.6 and 6.7 min. Figure 2: Typical chromatograms
(A) Blank plasma, (B) spiked plasma with the analytes (1-loganin, 2-morroniside and 3-paeoniflorin) and IS (4-bergenin), and (C) plasma sample collected after 45 min after oral administration of LD pills

Table 1: Precision and accuracy of the three analytes in rat plasma

Stability data of the 3 analytes are summarized in Table 2. The results indicated that the 3 analytes in rat plasma were stable at least for two freeze-thaw cycles or at –20° for 7 d. In addition, the three analytes were also stable for 6 h after extraction at room temperature.

Table 2: The stability of the three analytes in rat plasma 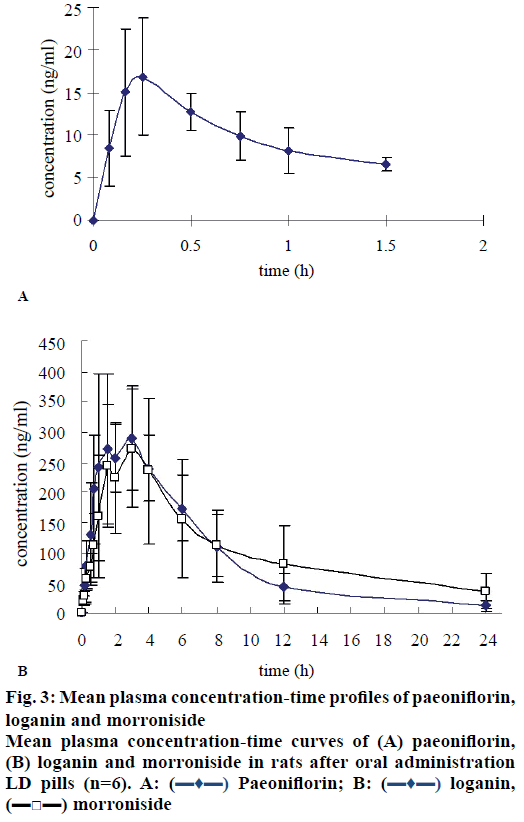 Table 3: Pharmacokinetic parameters of paeoniflorin, loganin and morroniside in rats