Simultaneous HPTLC Estimation of Berberine and Curcumin in Gruhadhoomadi Churna

Gruhadhoomadi churna has been traditionally used to reduce inflammation, burning sensation and swelling in case of gout and arthritis. A simple, precise, specific, accurate high performance thin layer chromatography method was developed for simultaneous estimation of berberine and curcumin form gruhadhoomadi churna. Thin layer chromatographic aluminium plates pre-coated with silica gel 60F254 were used as the stationary phase for chromatographic separation of the drugs. n-Propanol:water:glacial acetic acid (8:1:1 v/v/v) was selected as the mobile phase and analysis was carried out in the absorbance mode at iso-absorptive wavelength of 358 nm. This method exhibited good resolution for both drugs with retention factor 0.32±0.03 and 0.77±0.03 for berberine and curcumin, respectively. Regression analysis data indicated good linear relationship for the calibration plots for berberine and curcumin in the range of 200-600 and 400-1200 ng/spot and the regression coefficients were 0.9904 and 0.9934, respectively. The method was validated according to the International Conference on Harmonisation guidelines for accuracy, precision, limit of detection, linearity, limit of quantification, robustness and specificity. In conclusion, the developed method was rapid, simple, reliable and specific for the identification and quantification of berberine and curcumin.

Standardization of any herbal formulation is a complicated process. Standardization of herbal formulations is important in order to get good quality drugs on the basis of the concentration of their active ingredients [1]. Herbal medicines are used in India since ancient times and have gained attention worldwide due to being safe and efficacious. The main problem with their acceptance is lack of quality standards for the crude drugs used in the preparation of the formulation. In majority of cases establishing the accuracy, precision and reproducibility of the analytical method is the major hurdle. Advances in chromatographic techniques have made estimation and quantification of individual compounds in a mixture, simpler and faster. Different chromatographic techniques used are highperformance thin-layer chromatography (HPTLC), high-performance liquid chromatography (HPLC), gas chromatography-mass spectrometry and UV fluorimetry [2].

Gruhadhoomadi churna is a polyherbal formulation, which is mainly used to reduce inflammation, swelling and burning sensation in gout and arthritis. It consisted of fine powders of ghruadhooma (carbon of kitchen chimney), vacha (Alphenia calcaratta, family: Zingiberaceae), kusta (Saussurea lappa, family: Asteraceae), sathawa (Anethum sowa, family: Apiaceae), haridra (Curcuma longa, family: Zingiberaceae), daruharidra (Berberis aristata, family: Berberidaceae). This formulation is used externally, where a required quantity of powder is mixed with hot water and applied on the affected area and removed when it is completely dried. Used under medical supervision and rarely it may produce skin allergy, itching or redness [3]. Since this formulation is used to decrease the inflammation, out of the six ingredients, the two ingredients with proven antiinflammatory activities are haridra (C. longa) and daruharidra (B. aristata) [4,5]. Animal studies provided evidence that the active constituents berberine and curcumin present in daruharidra and haridra, respectively could be responsible for the antiinflammatory activity (Figure 1). Hence both these compounds were chosen as the marker compounds. Numerous studies reported methods for estimation and quantification of berberine and curcumin individually as well as in combination with other drugs from various formulations using HPTLC and HPLC, but no method was reported for the simultaneous estimation of berberine and curcumin together from gruhadhoomadi churna.

Figure 1: Structure of berberine (A) and curcumin (B)

In the present investigation, a simple, optimized and validated HPTLC method for standardization of gruhadhoomadi churna was developed. Two marker compounds were selected from the raw materials used for preparation of the churna. The method was validated on the basis of linearity, accuracy, precision, limit of detection (LOD), limit of quantification (LOQ) and robustness according to the International Conference on Harmonization (ICH) guidelines requirements.

Reference standards berberine and curcumin were procured form Yucca enterprises and Total Herb solutions, Mumbai, respectively. Berberine (C20H18NO4 +, molecular weight 336.36 g/mol) is an isoquinoline alkaloid, bright yellow in colour, which is found in the roots and stem-bark of Berberis species (B. aristata and B. vulgaris). Curcumin (C21H20O6, molecular weight 368.38 g/mol) a curcuminoid, yelloworange in colour and chiefly found in the rhizomes of C. longa. Both compounds were found to be soluble in methanol. Analytical grade reagents and solvents used were n-propanol, glacial acetic acid and methanol (S. D. Fine-Chem Limited, Mumbai) and the distilled water used was produced in the distillation plant of the laboratory. Powders of A. calcaratta, S. lappa, A. sowa, C. longa, B. aristata and charcoal for preparing in-house formulation were purchased from a local Ayurvedic shop in Nerul, Navi Mumbai. The marketed formulation was purchased from a Vaidyaratnam outlet in Seawoods, Darave, Navi Mumbai. The HPTLC system used consisted of a Camag Linomat V sample applicator equipped with a 100 μl Hamilton syringe. Aluminium TLC plates (10×10 cm, Merck) precoated with silica gel 60F254 were used for spotting. Standard solutions of markers and samples were applied as bands using Camag Linomat V sample applicator from the bottom edge of the chromatographic plate. Analysis was carried out using Camag TLC scanner-3 for scanning at 358 nm, which was found to be the isoabsorptive wavelength of both berberine and curcumin. Camag WinCATS software was used for application as well as scanning. Camag glass twin-trough chamber (10×10 cm) was used for development of the plates [6]. Berberine and curcumin stock solutions (1000 μg/ml) were prepared by dissolving accurately weighed 10 mg of each standard in 10 ml methanol. The extraction of the marketed and in-house formulations was done in a Soxhlet apparatus where in 2 g of powder was extracted using 200 ml of methanol for 8 h.

A mixture of n-propanol:water:glacial acetic acid (8:1:1 v/v/v) was used as the mobile phase for chromatogram development in the ascending mode to the migration distance of 90 mm. The chamber saturation time was optimized at 20 min. Bands of 6 mm size of the standard and sample solutions were applied at the bottom of the chromatographic plates at a distance of 10 mm [7].

Validation of the developed method was carried out according to the ICH guidelines Q2 (R1) [8]. The parameters checked were linearity, specificity, LOD, LOQ, precision, accuracy (recovery) and robustness. The linearity of an analytical procedure is its ability to obtain test results within a given range, which are directly proportional to the concentration of the analyte in the sample. Linearity was observed by plotting drug concentration against peak area for each standard and was validated by the correlation coefficients. Specificity of the method was checked by overlaying the spectra of standards with the spectra of extracts of marketed as well as in-house formulation. The method was found to be specific since the spectra of both standards matched with the spectra of the spots in the extracts at the same Rf values as that of standards. The precision of an analytical procedure expresses the closeness of agreement between a series of measurements obtained from multiple sampling of the same sample under the prescribed conditions. Repeatability and intermediated precision were determined by caring out intraday and interday variation studies, respectively in triplicate. Intraday precision is when the precision studies as performed three times on the same day while interday precision is when precision studies are performed over three different days. Determination of berberine and curcumin on three different days at three concentration levels 200, 400, 600 ng/spot and 400, 800, 1200 ng/spot, respectively was performed. The results were reported as percent relative standard deviation. The system precision studies were carried out by spotting 6 replicates of the same concentration of 400 ng/ spot for berberine and 800 ng/spot for curcumin and % RSD of the replicate injections was calculated. LOD is the lowest amount of an analyte in the sample that can be detected but not necessarily quantitated, under specified conditions. LOQ is the lowest amount of analyte in the sample that can be determined with acceptable precision and accuracy under specified conditions. LOD and LOQ were defined as k×SD/s (k is a constant, s is slope of calibration curve and SD is standard deviation). The amount for which the signal to noise ratios (S/N) were 3 and 10, respectively is defined as LOD and LOQ. The robustness of the method is a measure of its capacity to remain unaffected by small, but deliberate variations in method conditions and provides an indication of its reliability during normal usage. Accuracy of an analytical procedure is the closeness of agreement between the value, which is accepted either as a conventional true value or an accepted reference value and the value found. Recovery experiments were carried out using standard addition method. Sample of known concentrations were applied and then spiked with 80, 100 and 120 % w/w amount of analyte in triplicate and the accuracy was calculated as percent of analyte recovered from assay. The robustness was studied in triplicate at 400 and 500 ng/spot for berberine and 600 and 800 ng/spot for curcumin by deliberately making small changes in the mobile phase composition (7.8:1.2:1 v/v/v) and (8.2:0.8:1 v/v/v) and variation in saturation time (±2 min). 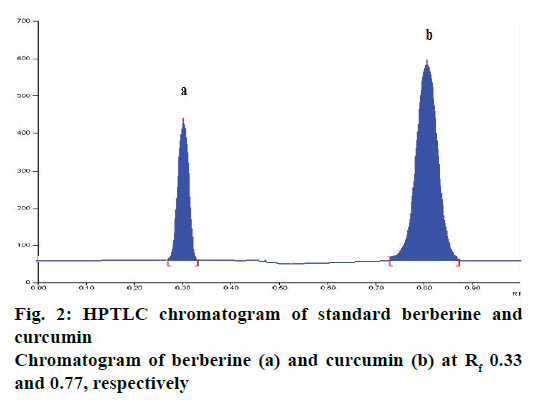 Each result is an average of three observations. Concentration levels used for precision parameter was 200, 400, 600 ng/spot for berberine and 400, 800, 1200 ng/spot for curcumin, RSD is relative standard deviation

Table 3: Intraday and interday precision results for berberine and curcumin

From these results it could be concluded that the developed method enabled rapid, precise, reliable and highly accurate simultaneous estimation of berberine and curcumin in the marketed gruhadhoomadi churna and the in-house formulation.