Simultaneous Method for Determination of Emtricitabine, Tenofovir Disoproxil Fumarate, Elvitegravir and Cobicistat in Tablets By HPLC

The present study provides us a single analytical tool for the determination of elvitegravir, cobicistat, emtricitabine and tenofovir disoproxil fumarate in dosage forms. This method helps us to separate and detect the four active pharmaceutical ingredients in a single run. The objective is to develop and validate a simple reverse phase liquid chromatography method for the simultaneous determination of emtricitabine, tenofovir disoproxil fumarate, elvitegravir and cobicistat in dosage tablets. For this method, an Agilent 1200, high performance liquid chromatography system, Atlantis C18 column (100×4.6 mm, 5 μm) as stationary phase and a gradient mixture of 0.1% trifluoroacetic acid and acetonitrile was used as mobile phase. The gradient program was adjusted at 1.0 ml/min flow rate and 10 μl injection volumes were maintained. The eluted compounds were monitored at 240 nm. The column oven temperature was maintained at 30°. The developed chromatographic method was validated for selectivity, linearity, precision, accuracy, sensitivity, robustness, and system suitability.

Stribild® is a prescription medicine approved by the U.S. Food and Drug Administration (FDA), marketed by Gilead Science, used in the treatment of HIV-1 in adults who has never taken anti-human immunodeficiency virus (anti-HIV) medicines before. This tablet (daily once) serves as an alternative for consuming several pills per day by a patient. Stribild, also known as ‘Quad’, is a fixed-dose combination tablet containing four medications viz., elvitegravir (ELV, 150 mg), an HIV integrase strand transfer inhibitor (HIV1 INSTI), cobicistat (COB, 150 mg), a CYP3A inhibitor, also a pharmacokinetic booster to increase the effectiveness of ELV, emtricitabine (EMT, 200 mg), a nucleoside reverse transcriptase inhibitor (NRTI) and tenofovir disoproxil fumerate (TDF, 300 mg), a nucleotide reverse transcriptase inhibitor (NtRTI). The integrase inhibitor (ELV) blocks integrase enzyme while NRTIs (EMT and TDF) block reverse transcriptase enzymes of HIV. By blocking integrase and reverse transcriptase enzymes, the drugs in combination prevent HIV from multiplying and can reduce the amount of HIV in the body [1-5]. Hence, Stribild is a complete regimen for the treatment of HIV infection and is considered to be much more convenient method of taking these anti-HIV drugs.

Several methods have been published for the determination of some of the drugs by thin layer chromatography (TLC) [6], UV spectrophotometry [6-9] and high performance liquid chromatography (HPLC) [10-18] in bulk and pharmaceutical formulations. However, a simple, robust, simultaneous HPLC-diode array detection (HPLC-DAD) method that enables the separation of four drugs in a single run is of prime importance. In view of the paucity of information, present study was conducted with an objective of development and validation of a simple reverse phase liquid chromatography (RPHPLC) method for the simultaneous determination of EMT, TDF, ELV and COB in dosage tablets.

EMT, TDF, ELV and COB samples are obtained from Mylan Laboratories Limited, Hyderabad. The structures of drugs are depicted in fig. 1. Acetonitrile and trifluroacetic acid (TFA) were obtained from Merck, Mumbai, India. All the solutions were prepared in MilliQ water (Millipore, USA). Test samples composed of Stribild® film-coated tablet containing 150 mg of ELV, 150 mg of COB, 200 mg of EMT and 300 mg of TDF are obtained from Gilead Sciences. Twenty tablets were weighed, and their average weight was calculated. The tablets were crushed into a homogeneous powder, and a quantity equivalent to one tablet was weighed and transferred into a 100 ml volumetric flask. This sample is then extracted in diluent by sonication, and filtered through Whatman 41 filter paper. The filtrate (7.5 ml) was quantitatively transferred to a 100 ml volumetric flask, and the solution was diluted to volume with the acetonitrile.

The developed chromatographic method was developed and validated for selectivity, linearity, precision, accuracy, sensitivity, robustness, and system suitability according to ICH [19,20]. The specificity of the developed liquid chromatography (HPLC-DAD) method for quantification of all the four active compounds was determined in the presence of excipients present in pharmaceutical products. In specificity study, the interference between drugs and tablet excipients were evaluated against the spectral purity obtained by carrying out the analysis for standard and sample solutions.

Linearity of the method was evaluated at six different concentration levels by diluting the standard solutions to give solutions over the ranges 12.5-125% target concentration for all four analytes, respectively. The calibration curves were constructed at six concentrations between 25-250 µg/ml for EMT, 100- 350 µg/ml for TDF and 12.5-200 µg/ml each of ELV and COB.

The accuracy of the method was determined by measuring the recovery of the drugs by the method of standard additions. Known amounts of each drug corresponding to 80%, 100%, and 120% of the target test concentrations (0.15 mg/ml of EMT, 0.25 mg/ml of TDF, and 0.1 mg/ml each of ELV and 0.1 mg/ml COB) were added to a placebo mixture to determine whether the recipients present in the formulation led to positive or negative interferences.

To determine the robustness of the developed method, experimental conditions were deliberately changed, and the RSD for replicate injections of EMT, TDF, ELV and COB peaks and the USP resolution factor between EMT and the other three peaks were evaluated. The mobile phase flow rate was 1.0 ml/min. This was changed and studied in the sample range of 0.8-1.2 ml / min in ±0.2 unit intervals. The effect of stationary phase was studied by the use of LC columns from different batches at 30°. The chromatographic variations were evaluated for resolution between EMT and the other three analytes in system suitability with respect to retention time and percentage assay of drugs.

The developed method was validated, as described below, for the following parameters such as system suitability, selectivity, linearity, precision, accuracy, limit of quantification and detection. HPLC conditions were selected in order to obtain chromatograms with better resolution of adjacent peaks, especially when similar components were analyzed. In view of achieving higher peak responses and shorter analysis time of target compounds in chromatograms, the effect of different mobile phase compositions was compared. Acetonitrile-water was chosen initially and besides several mobile phase additives such as ammonium acetate, formic acid, acetic acid, TFA was found to give good chromatograms with better resolution.

Selectivity of the current method was demonstrated by good separation of the four active ingredients (EMT, TDF, ELV and COB). Further, matrix components, e.g., excipients, do not interfere with the four analytes as they have no absorbance. The relative standard deviation (RSD) values of peak area and retention time for the analytes are within 2% indicating the suitability of the system. Results of system suitability study are presented in Table 1.

Peak areas of the active ingredients and concentrations were subjected to least square linear regression analysis to calculate the calibration equations and correlation coefficients. The result shows that there is a good correlation between the peak area ratios and the concentrations of drugs in the range tested. Results of which are presented in Table 2.

Precision of this method was determined by injecting the standard solution of the four analytes six times. The RSD of peak area of six replicates was found to be < 2. In all instances, the %RSD values were < 2%.

Percentage recovery of the four active ingredients using this method was determined using the fixed dose combination tablet dosage forms. The results of accuracy studies from standard solution and excipient matrix are given in Table 3. Recovery values demonstrated by the above method were accurate within the desired range.

The HPLC parameters were deliberately varied from normal procedural conditions including the mobile phase flow rate (1.0 ml/min). This was varied from 0.8-1.2 ml/min with gradient ±0.2 units. The effect of stationary phase was studied by the use of LC columns from different batches at 30°. Under the studied variations, all analytes were adequately resolved, and elution orders remained unchanged. The testing solution maintained a signal-to-noise ratio over 10 in all varied conditions. The peak resolution between EMT and other three analytes were all larger than 1.5 under each variation.

The proposed method was applied to the simultaneous determination of four antiviral drugs present in fixed dosage forms which comprised of ternary mixture (Stribild film-coated tablet containing 150 mg of ELV, 150 mg of COB, 200 mg of EMT, and 300 mg of TDF). Representative chromatograms obtained from the analysis of Stribild tablets are shown in fig. 2. The differences between the amount claimed and those assayed were not found to be significant. 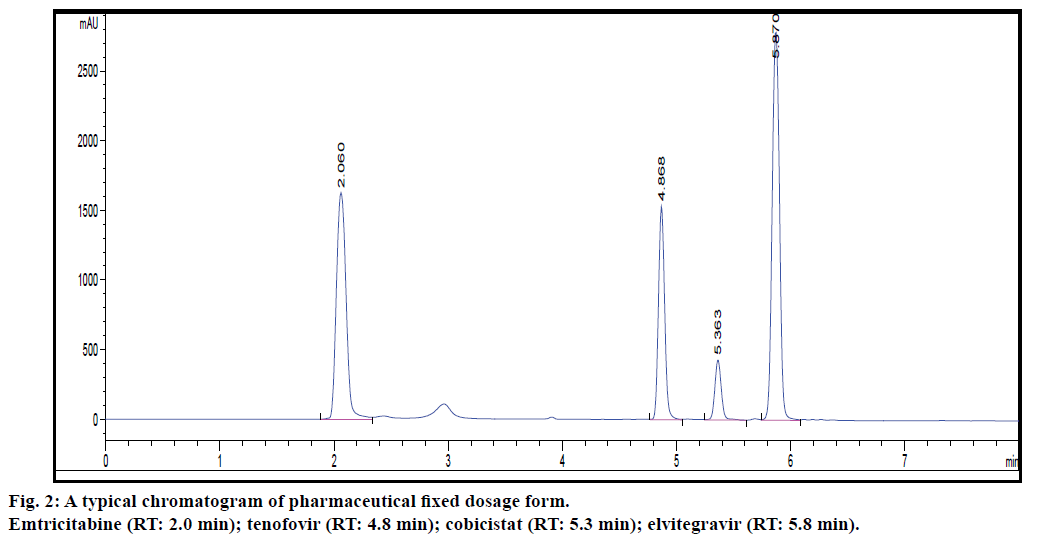 In this study, a validated simple and reliable RPHPLC- DAD method was described for the assay of a complex multidrug combination consisting of ELV, COB, EMT, and TDF for oral administration which is indicated as one pill, once-a-day prescription medicine used as a complete HIV-1 treatment. All the four active ingredients were successfully resolved and quantified using Atlantis C18 column in a relatively short run time of 8.0 min in gradient mode of chromatographic method. The developed method reported herein was found to be in good agreement.

The authors were deeply indebted to and express their sincere gratitude to the principal and management for support and the permission to carry out the work in the labs of Department of Chemistry, MVGR College of Engineering (A), Vizianagaram.