A binary mixture of trifluoperazine HCl and chlordiazepoxide was determined using reversed-phase liquid chromatography method using methanol:water (97:03, v/v) pumped at a flow rate of 1.0 ml/min. Quantification was achieved with ultraviolet detection at 262 nm over concentration ranges of 0.1-1 and 0.5-5 μg/ml; mean accuracies were 101.05±0.47 and 98.97±0.33 %, respectively. The method was successively applied to tablet dosage forms as no chromatographic interferences from the tablet excipients were observed. The method retained its accuracy and precision when the standard addition technique was applied.

TFP and CLR stock solutions (40 µg/ml and 200 µg/ml, respectively) were prepared by weighing accurately 2 mg TFP and 10 mg CLR powder into 2 separate 50 ml volumetric ß asks; 25 ml methanol was added, shaken for a few minutes, and diluted to volume with methanol. From these solutions (2.5 ml) were transferred into 2 separate 10 ml volumetric ß asks and diluted to the mark with methanol to give final concentrations of 10 and 50 µg/ml, respectively. Accurate aliquots equivalent to 0.1-1 µg TFP from its working solution (10 µg/ml) and aliquots equivalent to 0.5-5 µg CLR from its working solution (50 µg/ml) were transferred into 2 separate sets of 5 ml volumetric flasks and diluted to volume with methanol. Powder from the mixed contents of 20 tablets, equivalent to 1 mg TFP and 10 mg CLR, was transferred accurately to a 50 ml volumetric flask and diluted to volume with methanol. The solution was diluted to the same concentrations of working standard solutions and treated according to the linearity for the RP-HPLC method. The separation was done on a C18 column using methanol:water (97:03, v/v) as the mobile phase. The chromatogram was recorded under the following instrumental parameters: 20 µl injection volume, flow rate, 1.0 ml/min at 400 temperature and the eluent monitored at 262 nm. Calibration curves for both TFP and CLR were plotted, and the corresponding regression equations were calculated.

The aim of this work was to develop sensitive, accurate, precise and rapid analytical method for the simultaneous determination of TFP and CLR. This was achieved using RP-HPLC method. To optimize the proposed RP-HPLC method, all of the experimental conditions were investigated. For the choice of the stationary phase, reversed-phase separation was preferred due to the drawbacks of the normal phase, e.g., hydration of silica with water that can cause peak tailing. To optimize the mobile phase, different systems were tried for chromatographic separation of the two components by combining homogenous design and solvent polarity optimization. The best resolution was achieved using a mobile phase consisting of methanol:water (97:03, v/v), which gave good resolution and sensitivity of both drugs (fig. 1). 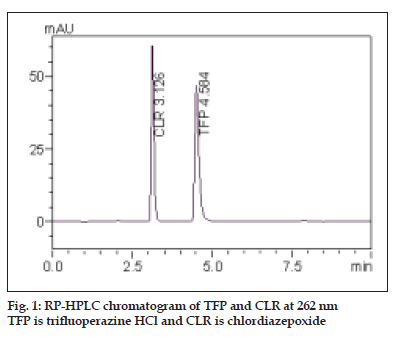 Figure 1:RP-HPLC chromatogram of TFP and CLR at 262 nm TFP is triß uoperazine HCl and CLR is chlordiazepoxide.

aRSD is relative standard deviation, bn is number of determinations, TFP is trißuoperazineHCl and CLR is chlordiazepoxide

an is number of determinations, bSD is standard deviation.

The authors are thankful to managements of Shree S. K. Patel College of Pharmaceutical Education and Research, Ganpat University, Kherva, Mehsana for providing needed facilities for this work.