Two simple, accurate, rapid and economical spectrophotometric methods have been developed for the simultaneous determination of paracetamol and metoclopramide hydrochloride from tablet dosage form. The first method developed employs formation and solving simultaneous equations using 248.6 nm and 275.6 nm as two wavelengths for formation of equations. Second method is absorbance ratio in which wavelengths selected were 265.6 nm as isoabsorptive point and 275.6 nm as lmax of paracetamol. Both the drugs and their mixtures obey Beer-Lamberts law at selected wavelengths at given concentration range. The methods have been validated statistically and by recovery studies. The results of analysis have been validated statistically and by recovery studies.

Paracetamol is chemically N-(4-hydroxyphenyl) acetamide. It is used mainly as antipyretic [1]. Metoclopramide is 4-amino-5-chloro N-(2- diethylaminoethyl)-2-methoxy benzamide. It finds its use as antiemetic [2]. Literature survey reveals that gas chromatography [3], HPLC [4], titrimetric [5] and densitometric [6] methods are available for the determination of paracetamol and spectrphotometric [7,8], HPLC [9] and 1H NMR spectroscopic [10] methods for the determination of metoclopramide. The review of literature revealed that no method is yet reported for the simultaneous determination of both the drugs in combined dosage form. This paper describes two simple, rapid, accurate, reproducible and economical methods for the simultaneous determination of metoclopramide and paracetamol from tablet formulation.

For the estimation of drugs from the commercial formulation, twenty tablets of brand Paramet (Wallace Pharmaceutical, Goa) containing 5 mg of metoclopramide (MET) and 500 mg of paracetamol (PAR). Twenty tablets were weighed accurately and average weight per tablet was calculated. Tablets were ground to a fine powder. A quantity equivalent to 100 mg of PAR was transferred to a 100 ml volumetric flask. MET present in this tablet powder was 1 mg, which could not be found out accurately due to low absorbance; hence to increase the accuracy, accurately weighed 99 mg pure drug sample of MET was transferred to the same volumetric ß ask. The powder was dissolved in 50 ml methanol with vigorous shaking and volume was made to mark with methanol. The solution was further diluted to get final concentration of 10 μg/ml of PAR (or MET). The absorbance of the solution was measured at 248.6 nm and 275.6 nm and concentration of the two drugs was calculated using Eqns. 1 and 2. The results of tablet formulation are shown in Table 1.

*Mean±SD for five determinations, MET is metoclopramide and PAR is paracetamol 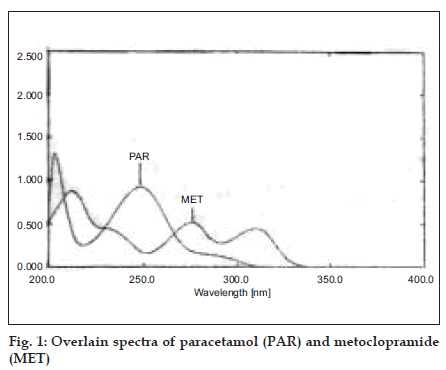 Tablet solution was prepared in methanol as described earlier and was further diluted to obtain the solution having concentration 10 μg/ml of PAR (or MET). This solution was then analyzed to obtain the spectra and absorbance value at 275.6 nm and 265.6 nm were noted. These values were then equated in above mentioned Eqns. 3 and 4 and the concentration of each drug was calculated and results of tablet formulation are shown in Table 1.

To study the accuracy, reproducibility and precision of the above proposed methods, recovery studies were carried out by addition of standard drug to pre-analyzed sample. Results of recovery studies were found to be satisfactory and reported in Table 2. The value of standard deviation was satisfactorily low and recovery was close to 100% include the reproducibility and accuracy of both the methods.

*Mean of five determinations. MET is metoclopramide and PAR is paracetamol

The first method employing simultaneous equation is a very simple method and can be employed for routine analysis of these two drugs in combined dosage form using simple instrumentation. Once the molar absorptions are determined, very little time will be required for routine analysis, as it would only require determination of absorbance of sample at the two selected wavelengths and few simple calculations.

The second method employed the graphic absorbance ratio at two selected wavelength, once the absorbance is determined. The reported methods were found to be accurate, simple and rapid. Hence it can be employed for routine analysis of both drugs in quality control laboratories.

Authors are grateful to Modi-MundiPharma Pvt. Ltd, for gift sample.