Anju goyal1 and I. Singhvi*

A PC based Systronic, UV/Vis double beam spectrophotometer (model No. 2101) with spectral bandwidth of 2 nm, wavelength accuracy ±0.5 nm (with automatic wavelength correction) and wavelength readability 0.1 nm increment was employed for all measurements using a matched pair of 10 mm quartz cells.

Standard bulk drug samples of RSGN and GLIM were provided by Dr. Reddy’s Laboratories, Hyderabad. Sodium hydroxide solution (0.1N) was used as solvent for the preparation of stock solution and for further dilutions. Double distilled water was used for the preparation of 0.1 N sodium hydroxide solution. The tablet samples of combined dosage form of RSGN and GLIM (Rosicon G, Glenmark Pharmaceuticals, Mumbai and Enseline-2G, Torrent Pharmaceuticals Ltd., Ahmedabad) were procured from local pharmacy.

From the overlain spectra of RSGN and GLIM in 0.1 N sodium hydroxide solution (fig. 1), it was observed that GLIM has zero absorbance at 318.0 nm, where RSGN has substantial absorbance so RSGN was estimated directly at this wavelength. For estimation of GLIM simultaneous equation was framed. Pure drug sample of RSGN and GLIM were dissolved separately in 0.1 N sodium hydroxide solution so as to give several dilutions of standard in concentration range of 0-30 µg/ml of each drug. All dilutions were scanned in wavelength range of 210.0 nm-370.0 nm. Absorbance was measured at 318.0 nm against reagent blank and plotted a calibration curve. For estimation of GLIM simultaneous equation was framed on the basis of absorptivity coefficient of two drugs at 238.0 nm. Absorptivity coefficient for GLIM at 238.0 nm was calculated as 418.63 cm-1g-1l and for RSGN 394.72 cm-1g-1l. These calculated values are the means of four independent determinations. Equation framed for GLIM estimation was, A= 418.63 C1+394.72 C2, where A is absorbance of sample solution at 238.0 nm, C1 and C2 are concentration of GLIM and RSGN respectively in g/l. Validity of above framed equation was checked by preparing five mixed standards using pure drug sample of two drugs, measuring their absorbance at respective wavelengths and calculating concentration of two components. Results of which are reported in Table 1. 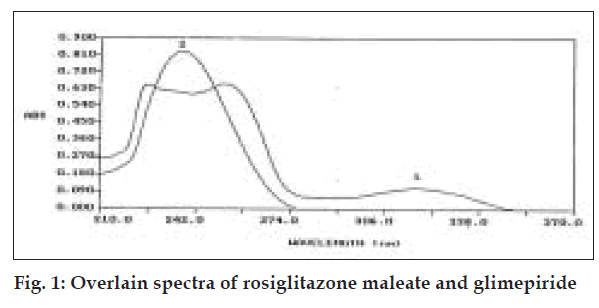 Table 1: Results of validation studies for method I and Iii using mixed standards

Estimation of RSGN was carried out in a manner similar to method-I. For estimation of GLIM first order derivative spectroscopy method was used. From first order derivative spectra of RSGN and GLIM in 0.1 N sodium hydroxide (fig. 2) zero crossing point 252.0 nm was selected for estimation of GLIM. Accurately weighed pure drug sample of RSGN and GLIM were dissolved in 0.1 N sodium hydroxide solution so as to give several dilutions in range of 0-30 µg/ml of each drug. The absorbance of these dilutions was recorded in first order derivative mode at 252.0 nm for estimation of GLIM and calibration curve was prepared. Validity of proposed method was checked by preparing five mixed standards using pure drug sample of two drugs and absorbance was measured at selected zero crossing point and determined concentration of GLIM using calibration curve. Results of validation studies are reported in Table 1. 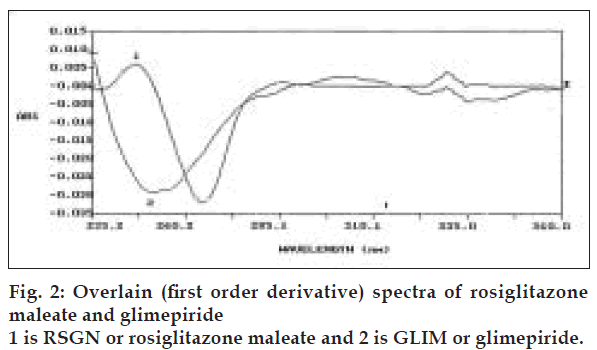 For method I, twenty tablets of each brand were weighed accurately and finely powdered. From each triturate of the twenty tablets an amount equivalent to 2 mg rosiglitazone maleate was accurately weighed and extracted four times with 20 ml portions of 0.1 N sodium hydroxide solution and filtered through Whatman filter paper no. 41 into a 100 ml volumetric flask. Washed residue with 0.1N sodium hydroxide solution and added washings to filtrate, volume of filtrate was made to 100 ml mark with 0.1N sodium hydroxide solution. Absorbance of this dilution was measured at 238.0 nm and 318.0 nm. Concentration of RSGN was calculated directly from absorbance value at 318.0 nm from calibration curve prepared using standard drug solution. Concentration of GLIM was calculated using above framed equation. Results of analysis of tablet formulation are reported in Table 2.

For method II, preparation of tablet sample solution and estimation of RSGN was carried out in a manner similar to method I. For estimation of GLIM final dilution was analyzed by recording absorbance at 244.8 nm and 257.2 nm and absorbance difference values were noted and concentration was calculated from the respective calibration curve. Results of analysis are reported in Table 2.

For method III, preparation of tablet sample solution and estimation of RSGN was carried out in a manner similar to method I. For estimation of GLIM absorbance of sample was recorded at 252.0 nm from first order derivative spectra of sample and amount of GLIM was calculated using respective calibration curve. Results of analysis are reported in Table 2.

To study the accuracy, reproducibility and precision for all the three developed methods, recovery studies were carried out by the addition of standard drug solution to pre-analyzed tablet sample with proper dilutions at three different concentration levels with in the range of linearity for both the drugs. Results of recovery studies were found to be satisfactory and are reported in Table 2.

The proposed methods described for the simultaneous analysis of RSGN and GLIM in combined tablet dosage form has been found to be simple, accurate, rapid, economical and sensitive to be applied in routine analysis of tablets. In the described methods there are no additional extraction or separation procedures to extract the drug from the formulation excipient matrix thereby decreasing the error in quantitation.

The developed methods are based on direct estimation of RSGN at wavelength maxima of RSGN, where GLIM has no absorbance, however for estimation of GLIM special techniques were used. First developed method involving formation and solving of simultaneous equation is based on absorptivity coefficient of two drugs at wavelength maxima of GLIM i.e. once the equation is framed then it is just required to measure the absorbance of sample solution at selected wavelengths and few calculations that can be manually done. Framed equation was validated using laboratory prepared mixed standards of two drugs which gave satisfactory results.

Third developed method for simultaneous analysis of RSGN and GLIM from combined dosage form makes use of first order derivative ultraviolet spectrophotometry based on principle that at zero crossing point of one component, the other component has substantial absorbance.

The results of analysis of two drugs from tablet formulation using all the three developed methods were found close to 100% for both RSGN and GLIM, standard deviation was satisfactorily low indicating accuracy and reproducibility of the methods. Recovery studies were satisfactory which shows that there is no interference of excipients. The developed methods were found to be simple, rapid, accurate and can be used for routine estimation of two drugs from tablet formulations.

Authors would like to acknowledge Dr. Reddy’s Laboratories, Hyderabad, India for providing pure drug samples of RSGN and GLIM.