Solubility enhancement is one of the important parameter, which should be considered in formulation development of orally administered drug with poor aqueous solubility [1]. Hydrotropy is a unique and unprecedented solubilisation technique in which certain chemical compounds termed as hydrotropic agents can be used to effect a several fold increase in the solubility of sparingly soluble solutes under normal conditions [2]. Hydrotropy is the term originally put forward by Neuberg in 1916, to describe the increase in the solubility of a solute by the addition of fairly high concentrations of alkali metal salts of organic acids [3]. Hydrotropes have been widely used in detergent formulation, health care, household applications and also as an extraction agent for fragrances [4]. The advantage of certain properties, such as the solvent character being independent of pH, high selectivity, absence of emulsification, inexpensive aqueous phase makes this technique superior to other solubilisation methods such as micellar solubilisation, miscibility, co-solvency, salting-in [5].

Hydrotropic agents [6] are structurally characterized by having a short, bulky, compact moiety, while surfactants have long hydrocarbon chains. In general, hydrotropic agents have a shorter hydrophobic segment, leading to higher water solubility than do surfactants. Some of the hydrotropic agents are ascorbic acid, benzoic acid, citric acid, nicotinamide, sodium benzoate, urea, lysine etc., The hydrotropes are formed by mixing the drug with the hydrotropic agent in water. These are identified by Fourier transform infrared (FTIR) spectroscopy, nuclear magnetic resonance (NMR), differential scanning colorimetry (DSC), and X-ray powder diffraction (XRPD).

Paroxetine hydrochloride (paroxetine HCl), a Biological Classification System (BCS) class II drug, is freely soluble in methyl alcohol, sparingly soluble in alcohol and slightly soluble in water [7,8]. It acts by inhibiting the reuptake of serotonin at the neuronal membrane and used in the treatment of obsessive compulsive disorder, obsessive preoccupations, including compulsive habits. Hydrotrope [9-11] formation was proposed using triangular pattern of hypothesis in which the distance between the functional groups of both the drug and the hydrotropic agents were measured in Angstrom (Å). The interaction of a drug with a hydrotropic agent results in increased aqueous solubility. This type of interaction may be hydrogen bonding or acid-base type.

Paroxetine HCl was obtained as a gift sample by Appcure Labs, Hyderabad, India. Nicotinamide, citric acid and tartaric acid were purchased from HiMedia Laboratories Ltd, Mumbai, India. All other chemicals and solvents were of analytical grade and freshly prepared. Distilled water was used throughout study.

Analytical methods used for the estimation of drug

Paroxetine HCl was analysed by dissolving 10 mg of drug in a few ml of methanol and made up to 100 ml with methanol. From the stock solution of paroxetine HCl, 1 ml was pipetted and diluted to 10 ml using water (10 μg/ml). A UV scan of this solution was taken between 200-400 nm. From the spectrum, λmax of 293 nm was obtained and utilized for further analysis. Serial dilutions were prepared form secondary stock solution to give different (10 to 80 μg/ml) concentrations of solution, which obeyed Beer Lambert’s range. The absorbance of these solutions were measured at 293 nm (R2=0.998).

Spectrophotometric analysis of interaction studies was performed to identify the possibility of interaction between drug and hydrotropic agents. For this purpose, two different concentrations of hydrotropic agents (lower and higher) were prepared with constant drug concentration (10 μg/ml). The prepared solutions were subjected to scanning between 200-400 nm and spectrum was obtained as an overlay method.

FTIR spectral studies were carried out for paroxetine HCL and the various hydrotropic agents (nicotinamide, citric acid and tartaric acid) for their pure form and for the prepared hydrotropes. The sample was prepared by dispersing the dry powder (drug/hydrotropic agent/ hydrotrope) in potassium bromide powder and analysed. The spectra were obtained by diffuse reflectance.

Dissolution studies were carried in triplicate for 1 h in USP dissolution test apparatus II. Pure drug and various hydrotropes containing drug equivalent to 20 mg were taken and filled in zero size hard gelatin empty capsules. Dissolution studies were carried out in 900 ml of distilled water maintained at temperature 37±0.5° and stirred at a rate of 50 rpm. Samples of 5 ml were withdrawn at time interval of 5 min up to 1 h. The samples were filtered through 0.2 μm filter, diluted suitably and analysed spectrophotometrically at 293 nm and the cumulative amount of drug released at various time intervals was calculated. Sink condition was maintained throughout the study.

Excess of paroxetine HCl was added to given volume (25 ml) of the solvent mixture contained in a 25 ml volumetric flask and flasks were shaken in a cryostatic constant temperature orbital shaking incubator at 25±1° for 8 h (100 rpm). The equilibrated solutions were then removed, filtered through Whatman filter paper (0.45 μ). The filtered saturated solutions were suitably diluted with double distilled water and the drug estimation was determined spectrophotometrically at 293 nm. The solubility studies of paroxetine HCl were done in triplicate. Similarly, solubility studies of paroxetine HCl at 37±1° were also conducted in triplicate.

The chemical structures of drug and hydrotropic agents were compared for identifying the functional groups that can contribute for hydrogen bonding using the ChemOffice 2004 software. Based on the analysis, paroxetine HCl was chosen as drug and nicotinamide, citric acid and tartaric acid were selected as hydrotropic agents. The distances between the functional groups are measured and the areas were calculated using the Eqn.; area2= s (s–a) (s–b) (s–c). The areas obtained between the drug and hydrotropic agents need not be same. Some amount of variation is permissible. The extent of solubilisation varies with the relative position of substituent in the molecule. Expansion of the ring in the aromatic hydrotropic agent also favours the solubilisation.

Neutralization by pH adjustment technique was successful for the preparation of hydrotropes of paroxetine HCl with nicotinamide, citric acid and tartaric acid. The neutralization by pH adjustment technique was employed; equimolar concentrations of drug and hydrotropic agents were separately dissolved in 0.5 N sodium hydroxide, then mixed two solutions and kept for stirring using magnetic stirrer with continuous addition of 0.5 N hydrochloric acid solutions in small amounts where upon hydrotrope precipitates. The precipitate was collected by filtration and the precipitate was kept in the freezer for 1 h and then stored in a desiccator. The prepared hydrotropes were characterized by melting point, FTIR, solubility and in vitro dissolution studies. An UV-spectrophotometric analytical method of paroxetine HCl was developed successfully in water. The λmax was found to be 293 nm. The calibration curve was constructed using various concentrations (10-80 μg/ml) in the Beer-Lambert’s range. The UV-spectrophotometric method exhibits no interference of hydrotropic agents with the estimation of paroxetine HCl. This is possible because all the hydrotropic agent solutions are colourless.

The FTIR spectra obtained for pure drug as well as the prepared hydrotropes with different hydrotropic agents were recorded in the Figure 4A, B, C and D. A perusal to Figure 4A, B, C and D, indicated that the characteristic bands of paroxetine HCl (3404, 3010, 1604, 1184, 1130 cm-1) were retained as such in all the spectra of hydrotropes, indicated the presence of drug in all the products. To verify the correlation between the evaluated physicochemical properties, the equilibrium solubility constant (k) at 37° obtained in the solubility studies is related with cumulative percent drug release obtained from dissolution studies. The direct and linear relationship was obtained between the k and percentage drug release i.e., higher the k value, higher the percentage drug release (Table 2). Similarly the triangular area of hydrotropic agents and equilibrium solubility constant (k) obtained in solubility studies at 37° are correlated (Table 2), and the profile was recorded in the Figure 5, indicated a linear relationship between the triangular area and k values. 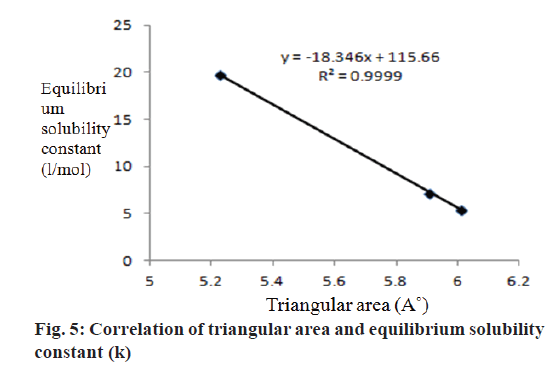 In vitro dissolution studies were conducted to verify the efficiency of hydrotropy technique. The studies were done in two different ways i.e., using the prepared products as such by taking 20 mg equivalent of paroxetine HCl and enclosed in the capsules. Similarly pure drug (20 mg) was filled in a capsule. The capsules so prepared were then subjected to dissolution studies using water as dissolution media at 50 rpm at 37°. The data obtained was given in the Table 4. A perusal to the Table 4, showed that the paroxetine HCl release was enhanced from the prepared hydrotropes (>80%) in comparison to the pure drug (37%) at 40 min.

Table 4: In vitro release of paroxetine hydrochloride capsules for pure drug and the hydrotropes

Further, tablets were formulated with the prepared hydrotropes using direct compression technique and then subjected to the dissolution studies. The composition of the tablets was given in Table 5. The in vitro dissolution studies for the prepared tablets using hydrotropes indicated that hydrotropic solubilisation enhanced the drug release by almost two folds (>88%) in comparison to the marketed product (56%) in 40 min. The data obtained was given in Table 6.

Hydrotropic technique was used to improve the aqueous solubility of paroxetine HCl. The hydrotropic agents such as nicotinamide, citric acid, and tartaric acid were selected based on the triangular pattern hypothesis and hydrotropes were prepared by neutralization by pH adjustment technique. The prepared hydrotropes were characterized by melting point, FTIR, solubility and in vitro dissolution studies. Further, tablets were formulated with the hydrotropes by direct compression technique and were evaluated by dissolution studies and compared the drug release with marketed tablets. The in vitro dissolution studies for the prepared tablets showed the faster drug release almost by two times (>88%) in comparison to the marketed product (56%) for 40 min. Thus, it is concluded that the proposed method is new, simple, accurate, reproducible, ecofriendly and inexpensive method to enhance the solubility.

The authors thank the management of Gokaraju Rangaraju College of Pharmacy for providing necessary facilities to carry out the studies and thanks are due to Appcure Labs Pvt Ltd for providing gift sample of paroxetine HCl.