Mutual prodrugs of some antiinflammatory agents were synthesized with the aim of improving the therapeutic index through prevention of gastrointestinal complications and to check the efficiency of release of the parent drug in presence of spacer. These mutual prodrugs were synthesized by direct condensation method using dicyclohexyl carbodiimide as a coupling agent and glycine as a spacer. The title compounds were characterized by spectral techniques and the release of the parent drug from mutual prodrug was studied in two different non-enzymatic buffer solutions at pH 1.2, pH 7.4 and in 80% human plasma. All mutual prodrugs exhibited encouraging hydrolysis profile in 80% human plasma. Biological activity of title compounds was studied by carrageenan-induced paw edema method. From the results obtained, it was concluded that these compounds retain the antiinflammatory action.

Non-steroidal antiinflammatory agents (NSAIDs) continue to be more widely used group of therapeutic agents than any other class of medicinal agents. The action of NSAIDs is thought to involve the inhibition of cyclooxygenases (COXs), which are responsible for prostaglandins (PGs) synthesis [1,2]. The gastrointestinal (GI) toxicity of the NSAIDs is most challenging since these side effects are mostly related to mechanism of action of these agents [3,4]. They are generally attributed to direct and/or indirect mechanisms. The direct contact effect usually results from a local irritation produced by the acidic group of the NSAIDs and local inhibition of PG synthesis in the GI tract. The indirect mechanism is due to a generalized systemic action occurring after absorption and can be demonstrated by intravenous dosing [5,6]. A possible approach to solve these delivery problems may be derivatization of the carboxylic function to produce prodrugs/mutual prodrugs with adequate stability at the acidic pH of the stomach. Thus, this type of derivatization may on one hand prevent local irritation of the stomach mucosa and on the other hand be capable of releasing the parent drug/s spontaneously or enzymatically in the blood following their absorption [7]. Naproxen, ibuprofen and ketoprofen were selected as model drugs for carboxylic acid derivatization.

Melting points were determined by open capillary method and uncorrected, which were further confirmed by visual melting point apparatus (Lab India). Thin layer chromatography (TLC) was carried out on precoated silica gel plates (Merck, 60GF254) using UV light as detecting agent. UV spectra were recorded on a UV/Vis spectrophotometer (Jasco V-30). IR spectra were recorded with a FTIR-4200, Shimadzu spectrometer. 1H NMR spectra were recorded in CDCl3 using 300 MHz 1H NMR Spectrometer (Jeol-FT-NMR-300mHz, Japan). Mass spectra were recorded on GCMSQP 2010-Schimadzu. Elemental analyses were carried out manually by combustion method in the Indian Institute of Technology, Powai, Mumbai. Naproxen was obtained as a gift sample from M/s Themis Labs, Pvt Ltd, Thane, India. Ibuprofen and ketoproen were obtained as a gift sample from Khandelwal Laboratories, Mumbai and FDC Ltd, Goa, respectively. Paracetamol was obtained as a gift sample from Piramal Healthcare Ltd., Mumbai. Bocglycine and DCC (dicyclohexyl carbodiimide) were purchased from Spectrochem Labs, Mumbai. Human plasma was purchased from the Blood bank of KEM Hospital, Mumbai. Prior permission was taken for the conduction of In vivo studies in animals. All other chemicals used were of analytical grade procured from institutional store and solvents were of synthetic grade utilized after distillation.

Paracetamol (1.51 g, 0.01 mol) was suspended in 20 ml of DCM in a beaker and 3-4 ml of pyridine was added to dissolve the same. The mixture was stirred for 1 h in cold condition (0-4°). This solution was added dropwise to the mixture of Boc-glycine and DCC and stirred for 4 h at 0-4° followed by stirring for 16 h at room temperature. The reaction mixture was further fi ltered to remove the byproduct, precipitated dicyclohexylurea. The fi ltrate was washed with 0.05N HCl and saturated solution of NaHCO3 to remove the unreacted paracetamol and concentrated under vacuum. The product of Boc-gly-paracetamol was then stirred for 2 h at room temperature with 1:1 mixture of dichloromethane and trifluoroacetic acid (TFA) to break the Boc which is a protecting group for -NH2 functional group in Boc-glycine. After breaking Boc the compound obtained was found to be glycine-paracetamol (GlyPara).

The mutual prodrug synthesized was subjected to chemical hydrolysis (using buffers of physiological pH) and enzymatic hydrolysis (using 80% human plasma). The chemical hydrolysis study was carried out in two buffer systems hydrochloric acid buffer (pH 1.2) and phosphate buffer (pH 7.4). The absorbance of the aqueous layer was found to be negligible so, the mutual prodrugs did not hydrolyze in hydrochloric acid buffer solution of pH 1.2 in 5 h.

Mutual prodrug (40 mg) was dissolved in 10 ml chloroform and 1 ml of the same was added to 99 ml buffer solution in a 250 ml beaker. The solution was stirred using a magnetic stirrer and the temperature was maintained at 37°. Aliquot of 1 ml was withdrawn from the beaker and sink conditions were maintained by adding 1ml of buffer at the end of 0.5, 1, 2, 3 and 4 h. The sample solution of pH 7.4 was acidifi ed with 0.5 ml of 9.6% phosphoric acid solution, prior to extraction. The aliquots withdrawn were extracted with 7 ml of chloroform. Each aliquot was extracted for 3 min. by using the cyclo-mixer. This was followed by centrifugation of the same at 2000 rpm for 2 minutes. 5 ml of Chloroform layer was separated from each sample and extracted into 5 ml of 0.05N NaOH solution. Absorbance of aqueous layer was recorded against 0.05N NaOH as the blank treated similarly at λmax 230 nm, 224 nm and 258 nm for NapGlyPara, IbuGlyPara and KetGlyPara respectively Table 1.

Mutual prodrug (40 mg) was dissolved in 10 ml chloroform and 1 ml of the same was added to 99 ml 80% human plasma in a 250 ml beaker. The contents of the beaker were stirred continuously and the temperature was maintained at 37°. Aliquot of 1 ml was withdrawn at the end of 0.5, 1, 2, 3 and 4 h and equal aliquots of fresh 80 % human plasma was replaced in the beaker immediately to maintain sink conditions. The sample of pH 7.4 was acidifi ed with 0.1 ml of perchloric acid solution, prior to extraction.

The aliquots withdrawn were extracted with 7 ml of chloroform. Each aliquot was extracted for 3 min by using the cyclo-mixer. This was followed by centrifugation of the same at 2000 rpm for 2 min. Chloroform layer of 5 ml was separated from each sample and extracted into 5 ml of 0.05N NaOH solution. Absorbance of aqueous layer was recorded against 0.05N NaOH as the blank treated similarly at respective λmax for NapGlyPara, IbuGlyPara and KetGlyPara (Table 1).

Wistar rats weighing between 100-150 g were divided into 5 groups of 6 rats each. The rats were injected subcutaneously 0.1 ml of 1% (w/v) of carrageenin into the planter region of each hind-paw. NapGlyPara and IbuGlyPara were evaluated at single dose level; naproxen and ibuprofen were used as standard antiinflammatory drugs for comparison. The paw edema volumes were measured using plethysmometer at various time intervals like 0, 1, 2, 3, 4, 6 h after carrageenin injection. The hind paw edema inhibition at doses of test drug and standard was calculated by comparing with vehicle treated control rats shown in fig. 1 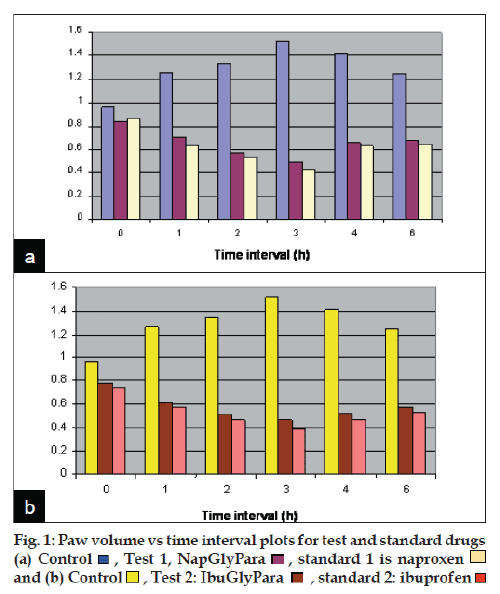 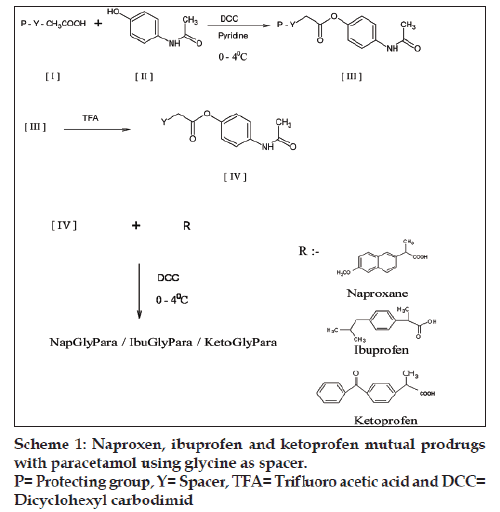