Spectrophotometric analysis of fosinopril sodium in pure form and tablets

Rajashree Mashru*, V. B. Sutariya and A. J. Thakker

Fosinopril sodium, l-proline-4-cyclohexyl-1-[[[2-methyl-1-(1-oxopropoxy)propoxy]-(4-phenylbutyl) phosphinyl] acetyl] sodium, is a new angiotensin converting enzyme inhibitor that is effective in the treatment of hypertension [1,2]. It is also effective when used alone or in combination with other medications for the treatment of high blood pressure [3]. Fosinopril sodium is also prescribed for heart failure [4].

The drug is available in tablet form and is not official in any of the pharmacopoeia. So far only spectroscopic and liquid chromatographic methods have been reported for the estimation of fosinopril sodium [5-8]. But all these methods are more time consuming and expensive than the simple spectrophotometric method. The aim of the present investigations is to develop a simpler, rapid and cost-effective analytical method for the determination of fosinopril sodium in bulk drug and in tablet dosage form. The present investigation illustrates simple, sensitive and accurate UV method and third derivative spectroscopic method for the analysis of fosinopril in bulk drug and in tablets. 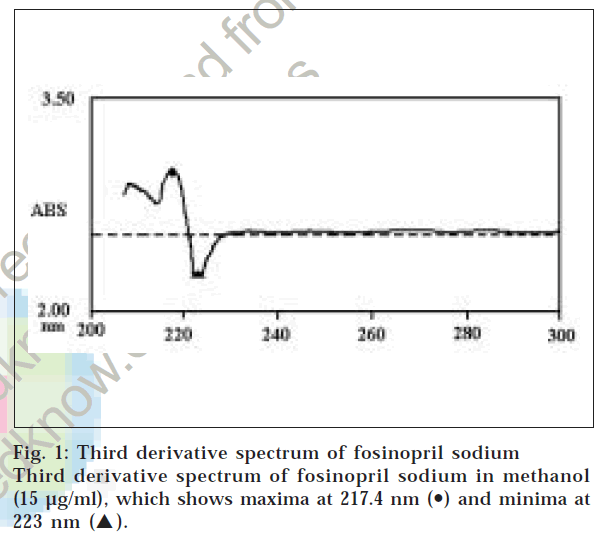 The optical characteristics such as Beer’s law limit, Sandell’s sensitivity, molar extinction coefficient, percent relative standard deviation (calculated from six measurements containing three-fourths of the concentration of the upper Beer’s law limit) and percentage range of error at 95% confidence limit of both methods were incorporated in Table 1.

*Y = a + bc, where c is concentration in μg/ml and Y is absorbance units.
**Six replicate samples.