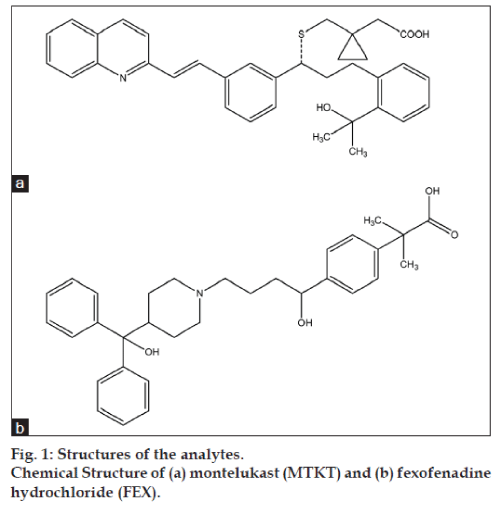 Fig. 1: Structures of the analytes.

MTKT and FEX combination tablet is a recently introduced tablet formulation in Indian market. Literature survey reveals that many analytical methods are reported for determination of MTKT and FEX individually. However, no method is reported for simultaneous estimation of these two drugs by reverse phase HPLC in combined dosage form.

Both the drugs MTKT and FEX are official in IP 2010. Detailed survey of literature for MTKT revealed several reported methods based on different techniques, viz. HPLC [4‑11], HPTLC [12,13], UV spectrophotometry [14‑22], voltammetric [23], and LC‑ESI‑MS/MS [24] for its determination from pharmaceuticals. Similarly, survey of literature for FEX revealed reported methods based on HPLC [25‑35], UV spectrophotometry [36‑39], UPLC [40], and LC‑MS [41] for its determination from pharmaceuticals. There is only one stability‑indicating method has been reported for determination of MTKT and FEX [42]. This manuscript describes the development and subsequent validation of a stability‑indicating isocratic reversedphase HPLC method for simultaneous determination of MTKT and FEX in the presence of their degradants. To establish the stability‑indicating nature of the method, forced degradation of drug substances and drug product was performed under different stress conditions (thermal, photolytic, UV exposure, acid and basic hydrolytic and oxidative), and stressed samples were analyzed by the proposed method. The proposed LC method was able to separate both drugs from degradants generated during forced degradation studies.

A total of 0.1% OPA was prepared by diluting HPLC grade water. A total of 900 ml of methanol and 100 ml of 0.1% OPA were mixed and pH was adjusted to 6.8. This mixture was sonicated and filtered through 0.45 µm membrane filter and used as a mobile phase. Stock solution of MTKT was prepared by transferring 100 mg of MTKT into 100 ml volumetric flask. And stock solution of FEX was prepared by transferring 60 mg of FEX into 100 ml volumetric flask. Volumes were made upto the mark with mobile phase in both volumetric flasks to obtain a solutions containing 1000 μg/ml of MTKT and 600 μg/ml of FEX. The solution of MTKT was further diluted with the same solvent to obtain the final concentrations of 50 μg/ml of MTKT. The RP-HPLC was performed in with isocratic mode using a mobile phase of methanol: 0.1% OPA (90:10 v/v), pH 6.8 on Lichrospher® 100, RP‑18e column (250×4.6 mm, 5 µm particle size) with 1 ml/min flow rate at 226 nm using UV detector.

Calibration curves for MTKT and FEX

Tablet formulation contained MTKT and FEX in a ratio of 1:12. Appropriate aliquots of MTKT and FEX stock solutions were taken in different 10 ml volumetric flasks and diluted up to the mark with mobile phase to obtain final concentrations of 2-10 µg/ml and 24-120 µg/ml of MTKT and FEX, respectively.

Forced degradation of each drug substances and the drug product was carried out under hydrolytic, oxidative, photolytic, and thermolytic conditions. Thermal and photo degradation of drug substances and drug product was carried out in solid state. After degradation these solutions were diluted with mobile phase to achieve a concentration of 5 μg/ml of MTKT and 60 μg/ml of FEX (on label claim basis for marketed formulation). Then 20 μl portions of degraded solutions were injected into the HPLC system and analyzed under the chromatographic analysis condition described earlier.

The method of analysis was validated as per the recommendations of ICH and USP for the parameters like accuracy, linearity, precision, detection limit, quantitation limit, and robustness. The accuracy of the method was determined by calculating percentage recovery of MTKT and FEX. For both the drugs, recovery studies were carried out by applying the method to drug sample to which the known amount of MTKT and FEX corresponding to 80, 100, and 120% of label claim had been added (standard addition method). At each level of the amount three determinations were performed and the results obtained were compared.

Intra‑ and inter‑day precision study of MTKT and FEX was carried out by estimating the corresponding responses three times on the same day and on three different days for the concentration of 5 μg/ml and 60 μg/ml for MTKT and FEX, respectively. The limit of detection (LOD) and limit of quantitation (LOQ) were calculated using following formula: LOD=3.3(SD)/S and LOQ=10(SD)/S, where SD is standard deviation of response (peak area) and S is average of the slope of the calibration curve.

System suitability tests are an integral part of any chromatographic analysis method which is used to verify reproducibility of the chromatographic system. To ascertain its effectiveness, certain system suitability test parameters were checked by repetitively injecting the drug solution at the concentration level of 5 and 60 μg/ml for MTKT and FEX, respectively to check the reproducibility of the system.

For robustness evaluation of HPLC method a few parameters like flow rate and pH of mobile phase were deliberately changed. Each factor selected was changed at three levels (−1, 0, +1) with respect to optimized parameters. Robustness of the method was done at the concentration level of 5 and 60 μg/ml for MTKT and FEX, respectively.

Twenty tablets were accurately weighed and finely powdered. The quantity of the powder equivalent to 10 mg MTKT or 120 mg FEX was accurately weighed and transferred into 100 ml volumetric flask. The volume made up to the mark with mobile phase. The solution was filtered through Whatman filter paper. The both solutions of MTKT and FEX were further diluted with the mobile phase to obtain final concentrations of 6l and 72 µg/ml for MTKT and FEX, respectively. 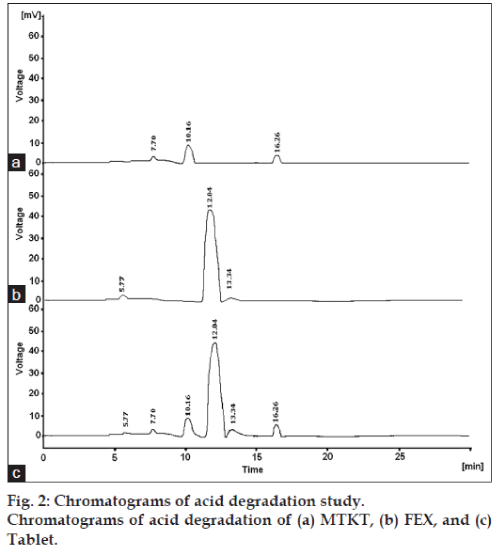 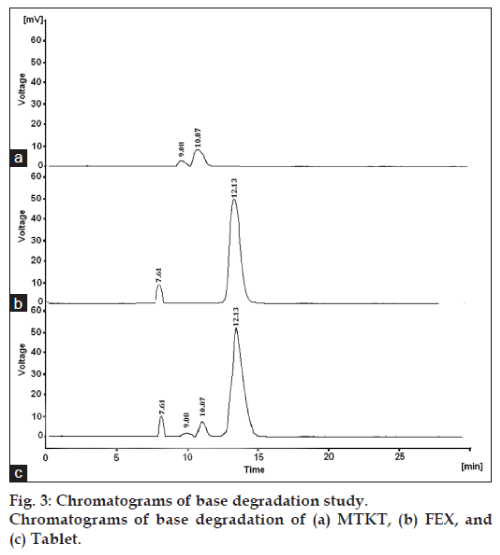 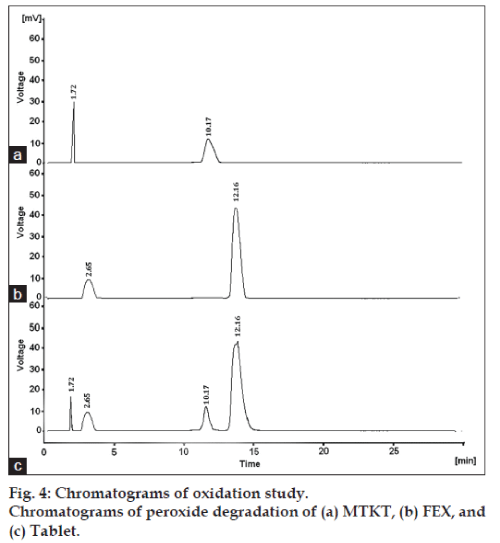 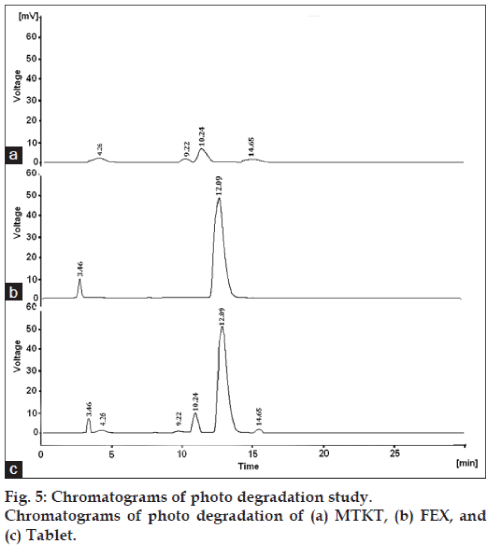 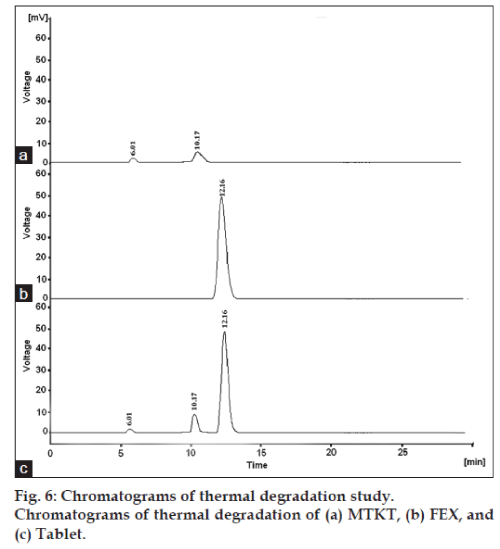 Table 1: Summary of degradation of mtkt and fex in different condition 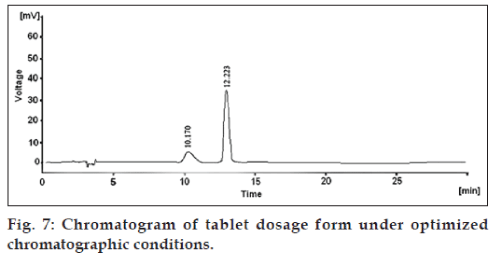 In this reported study, a stability‑indicating HPLC method was developed for the simultaneous determination of MTKT and FEX and validated as per ICH guidelines. The developed method was accurate, precise, and repeatable. It was also found to be simple, specific, and sensitive for analysis of MTKT and FEX in combination without any interference from the degraded products, diluents, and excipient. Assay results for the combined dosage form using the proposed method showed 99.68±1.1229% of MTKT and 99.66±0.2544% of FEX. It can be concluded that as the method could separate the drugs from their degradation products, it may be employed for analysis of stability samples of MTKT and FEX.

The authors thank Torrent Research Centre, Ahmedabad, for providing montelukast and Sakar Healthcare Pvt. Ltd., for providing fexofenadine hydrochloride as gift samples for this work. Authors also wish to thank the Principal and management for providing necessary facilities and encouragement.