A stability-indicating UV/Vis spectrophotometric method was developed and validated for estimation of diazepam in tablet dosage form. The proposed method utilized a Specord 250 plus PC double beam spectrophotometer using 1.0 cm quartz cells and all determinations were made at a wavelength of 231 nm in 1:1 methanol:distilled water. Experiments were designed for determining linearity, limit of detection and quantitation, accuracy, precision and specificity of this analytical method as per the International Organization for Standardization guidelines. The drug substance and the drug product were exposed to thermal, photolytic, hydrolytic, and oxidative stress conditions, and the stressed samples were analyzed using the proposed method to demonstrate the specificity of the method. The proposed method was found to be linear in the concentration ranges from 3.096-15.480 µg/ml with the linear correlation coefficient of R2= 0.999 and the mean recoveries were 98.36 to 100.72 %. Although the degradation products of stressed condition had not been identified, the method had been able to detect the changes due to stress condition. The stated method can be used as stability indicating method with high degree of linearity, accuracy and precision for assay of diazepam in routine pharmaceutical analysis of tablets.

Method validation may be regarded as one of the most accustomed areas in analytical chemistry. The International Organization for Standardization defines validation as the confirmation by examination and provision of objective evidence that the particular requirements for a specified intended use are fulfilled [1]. This enunciation primarily implies that a detailed examination has been carried out and gives evidence that the utility of the analytical method with a high degree of accuracy consequently produces results that are fit for purpose [1]. The use of validated methods is exigent for an analytical laboratory to parade its qualification and proficiency [2].

Stability testing forms a weighty part of the process of pharmaceutical product development. The motive of stability testing is to provide testimony on how the quality of a drug substance or drug product varies with time under the influence of various environmental factors. Stability testing by forced degradation involves degradation of drug products and drug substances under the influence of more severe than accelerated conditions such as hydrolysis, temperature, humidity, and light [3,4]. Sense of the stability of molecule helps in selecting proper formulation and package as well as in providing proper storage conditions and shelf life, which is fundamental for regulatory documentation [4]. This work deals with development and validation of a new stability-indicating spectrophotometric method for the routine appraisement of diazepam in bulk and tablet dosage form to make the assay test affordable and pecuniary.

Diazepam (C16H13ClN2O) is a sedative and hypnotic drug of benzodiazepine-2-one group [5-7]. Basically, it is highly lipophilic and rapidly absorbed after oral administration [8]. Reaction between 2-amino- 5-chlorobenzophenone and glycine ethyl ester in pyridine leads to 7-chloro-1,3-dihydro-5-phenyl- 2H-1,4-benzodiazepine-2-one, which subsequently is methylated with methyl sulphate in the presence of sodium ethoxide to yield diazepam (Figure 1) [9]. It is effective in providing symptomatic relief of tension and anxiety [6-9] and acts as an anticonvulsant and anaesthetic by potentiating GABAergic neurotransmission [6-10]. 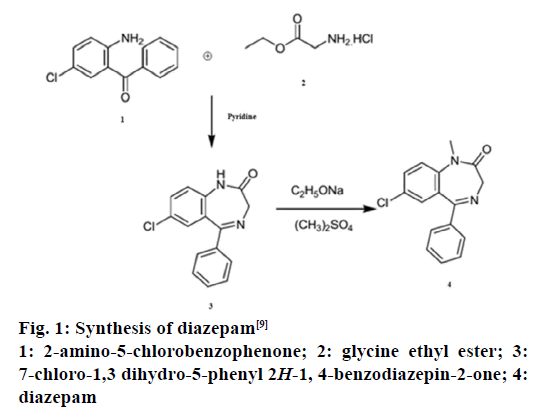 UV/Vis spectrophotometry is one of the most frequently employed techniques in pharmaceutical analysis, which is simple, rapid, specific, precise, accurate and applicable to small quantities of compounds. The main principle of UV/Vis spectrophotometry is the measurement of the amount of UV or visible radiation absorbed by a substance in solution. Beer- Lambert law is the fundamental law that governs the quantitative spectrophotometric analysis, which states that the intensity of a beam of parallel monochromatic radiation decreases exponentially with the number of absorbing molecules as it passes through a medium of homogeneous thickness [11].

UV/Vis spectra were recorded on a Specord 250 plus PC double beam spectrophotometer using 1.0 cm quartz cells. All weighing’s were done on an electronic balance (A&D Company Ltd., USA). Bath sonicator (Wisd Laboratory Instruments, Germany) was used to aid dissolution. Glassware used in each procedure were bleached entirely with detergent and rinsed thoroughly with double-distilled water and dried in a hot air oven. Pure drug samples of diazepam were obtained from Beximco Pharmaceuticals Ltd., Dhaka, Bangladesh. All other chemicals and reagents used were of analytical grade. Methanol, sodium hydroxide (NaOH), hydrochloric acid (HCl) and hydrogen peroxide (H2O2) were purchased from Active Fine Chemicals Ltd., Shegun Bagicha, Bangladesh. Four locally available brands of diazepam tablets coded as D1, D2, D3 and D4 have been purchased from a local pharmacy to conduct the assay with the developed method.

Selection and standardization of the solvent

In the preliminary trial, five different compositions of solvent were selected that included distilled water, methanol, methanol:distilled water (1:1), 0.1 N HCl and phosphate buffer (pH 7.4). Methanol:distilled water (1:1) was selected as the appropriate media for ease of sample preparation, solubility of the drug and cost of the solvent. The wavelength maximum of diazepam was found to be 231 nm. Stock solution of diazepam standard was prepared to get an approximate concentration of 5 μg/ml and sonicated for 4 min in bath sonicator.

Accuracy of the method was determined by performing the recovery experiment. This experiment was performed at five levels equivalent of 80 to 120 % of nominal concentration. Three replicate samples of each concentration level were prepared and the percent recovery at each level (n= 15) were determined.

The precision of the instrument, relative standard deviation (RSD) was checked by repeated scanning of samples (n= 6) for diazepam standard without changing the parameter of the proposed spectrophotometric method. Intra-assay and inter-assay precision (RSD) data were obtained by repeatedly analysing, in one laboratory on one day (1st, 3rd, and 8th h) and several days within a week (on day 1, 3, 5 and 7), aliquots of a homogeneous sample, respectively. Percent RSD = standard deviation of measurements/mean value of measurement×100.

The responses of the standard diazepam, marketed product and excipient of stressed condition were also compared with the response of the same solution of unstressed condition to establish the stability indicating nature of the developed UV/Vis method as part of the forced degradation studies.

Here, the drug substance and one out of the four tested marketed drug product (D1) have undergone forced degradation study under neutral, acid, and base hydrolytic as well as oxidative, photolytic and thermolytic stress conditions [13]. Only thermal degradation of drug substance and drug product was carried out in solid state. Solutions were prepared by dissolving drug substance or drug product in distilled water, aqueous HCl/NaOH/H2O2 solution, or solvent to obtain a concentration of 50 μg/ml and later diluted with the solvent of methanol:distilled water (1:1) to achieve an approximate concentration of 5 μg/ml. Finally, a spectral scan ranges from 200-400 nm in UV/Vis spectrophotometer was performed to take absorbance at different days for observing degradation.

The described method has been validated for response function, accuracy, repeatability and intermediate precision. The nominal concentration of standard solutions was approximately 5 μg/ml. The results of UV analysis have been shown in Tables 1-4. The proposed method was found to be linear with a linear correlation coefficient of 0.999 and the linear regression Eqn., y = 0.127x+0.008 (Figure 2). The minimum concentration levels at which diazepam can be reliably detected (LOD) and quantified (LOQ) were found to be 0.159 and 0.482 μg/ml, respectively. The mean recoveries were 98.36-100.72 % substantiated the method as accurate (Table 1). The repeatability and intraday assay precision (RSD) was <1 % and the interday assay precision was <2 % revealed the proposed method as precise (Table 2). 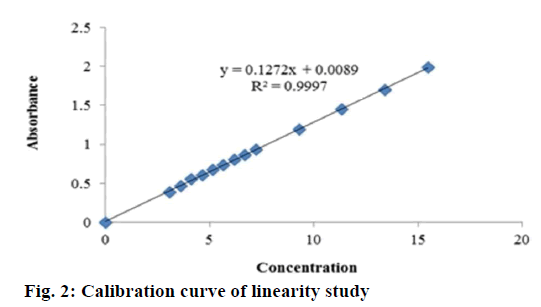 Potency assay tests of four different brands of diazepam were performed by the proposed method. According to USP 29 [5], diazepam tablets must contain 95-105 % of the labelled amount of drug. All the brand products met the standard criteria with the new analytical method (Table 3).

Specificity is the ability of the method to measure the analytic response accurately in the presence of all potential components. Specificity of the proposed method is also confirmed by the stress study of the sample. The study was performed to validate stability indicating capability of the developed method and to identify the key factors, which will impact the stability of the drug product. The specificity was determined according to ICH guidelines by subjecting a sample solution and solid to accelerated degradation by acidic/ alkaline/neutral hydrolytic, oxidative, photolytic, and thermal stress conditions to evaluate the interference of degradation products in the quantitation of diazepam. The reported method provides data on specificity for their estimation in the presence of formulation excipients and degradants. The absorbance obtained with the mixture of the excipients showed no interference with the absorbance of standard (Table 4 and Figure 3). The percent assays of diazepam standard and marketed product under stressed condition at different observation days are listed in Table 5. To develop the stability indicating method, the UV spectrums of diazepam under several stressed condition were studied on UV/Vis spectrophotometer. When diazepam standard was subjected to neutral hydrolysis at room temperature, some minor degradants were generated (Figure 4A). On the other hand, neutral hydrolysis at 60° gave a result of highly increased value with 135.93 % in the assay (Figure 4B). There was no notable degradation for neutral hydrolysis of marketed product (Figures 4A and 3B). A major degradation was observed for base hydrolysis. Here, after 3rd d more than 20 % of diazepam was degraded when reacted with 0.1 N NaOH at room temperature (Figure 4E). Nevertheless, after 1st d of observation more than 20 % of standard diazepam and marketed products were degraded because of base hydrolysis at elevated temperature of 60° (Figure 4F). Although, 20 % of diazepam standard was degraded due to oxidation at room temperature (Figure 5A) no significant change was observed for oxidation at 60° (Figure 5B). Figure 6: Overlain UV spectra of thermal stress effect on diazepam at solid state
(A) Sample at room temperature, (B) sample at 60°

Absorbance of excipient increased at approximately 230 to 270 nm during basic hydrolysis, which increases at 60° (Figure 4F). The study also demonstrated that the excipient has no major effect in other stressed conditions on diazepam standard and marketed product (Figures 4 and 5).

Diazepam has shown a broad UV/Vis absorption profile at 231 nm (Figure 4). Some data showed a high increased value of drug product and substance. Such as, neutral hydrolysis on diazepam standard at 60°, acid hydrolysis at 60°, photolytic stress on marketed product at light and thermal stress on diazepam standard at 60°. These may occur due to formation of other side/degraded products, which may have similar absorption profile as diazepam. Acid hydrolysis of diazepam gives rise 2,4-dichloro-10-methylacridin-9- (10H)-one and 2,4-dichloroacridin-9-(10-H)-one [14]. Again, photolysis of diazepam gives rise nordiazepam, DIZ 3, DIZ 4, DIZ 6 and DIZ 7 [15]. The absorbance pattern of diazepam was also changed with time and temperature. These all factors resulted in an overall effect on the assay of diazepam content in standard as well as marketed product. Although the degradation products had not been identified, the method had been able to detect the changes due to stress condition. Further analysis of the degradation product may be done through chromatographic separation of the degradants, followed by characterization through appropriate spectroscopic techniques such as mass spectroscopy and nuclear magnetic resonance spectroscopy. The results of the study thus provide an improved understanding of the degradation pathway of diazepam, stability indicating method development and selection of storage conditions.

The proposed UV/Vis spectrophotometric method was validated successfully in accordance to ICH Q2B guideline. Based on the UV spectral results attained from the analysis of forced degraded samples using the proposed method, it can be concluded that the method is specific for determination of diazepam in presence of degradants. The method has linear response in stated range with a lower value of LOD and LOQ and is found to be accurate and precise. The stated method can be used as stability indicating method for assay of diazepam in tablet dosage form.