Embelin, a naturally occurring benzoquinone, is obtained from fruits of Embelia ribes, which plays a vital role in the Ayurvedic system of medicine. The benzoquinone has diverse pharmacological and therapeutic properties and now constitutes a part of modern medicine. The aim of our study was to observe the effect of various stress conditions on this potential drug candidate. Embelin was subjected to stress conditions of acid and alkaline hydrolysis, oxidation, photolysis and thermal degradation. A significant degradation was found to occur by acid hydrolysis, oxidation and to a lesser extent under thermal stress and alkaline hydrolysis; the compound was found to be stable to photolytic stress. Further, the degradation product resulting from the acid hydrolysis was isolated and its structure was elucidated using spectroscopic techniques. Stress degradation studies on embelin provide an insight for its stability and storage considering the formulation aspects of modern medicine.

Embelin (2,5–dihydroxy–3–undecyl–1,4–benzoquinone) (fig. 1), is a naturally occurring benzoquinone is isolated from Embelia ribes. The fruits of this plant contain 2.5–3.1% of embelin on dry weight basis and finds its use in several Ayurvedic preparations like Sanjivani Vati, Pippalyasavam, Dhanwantara ghritham, Vidangarishta, Kaisoraguggulu vatica[1]. Embelin shows diverse pharmacological activities including chemo prevention in hepato–carcinogenesis observed in Wistar rats[2], antifertility effects[3], wound healing[4], antibacterial[5], free radical scavenging[6] and in vitro cytotoxic activity against B16 and XC cell lines[7]. It has been shown that embelin is a fairly potent, nonpeptidic, cell–permeable inhibitor of X–linked inhibitor of apoptosis protein[8,9] and hence can be considered as a potential drug candidate in modern system of medicine. Ammonium salt of embelin (ammonium embelate) is already marketed as an anthelmentic agent[10]. Considering its future applications in modern medicine, the objective of the current work was to carry out stress degradation studies to establish the inherent or intrinsic stability characteristics of the molecule and ascertain the degradation pathways. The parent drug stability guidelines by International Conference on Harmonisation (Q1AR) requires that the stress testing of drug substance should include the effect of elevated temperature, humidity, light, oxidizing agents, as well as the susceptibility across a range of pH values[11]. Stress degradation studies of various phytoconstituents such as forskolin and guggulosterone already been reported[12,13].

In this study, the effect of different stress conditions on the stability of the drug was observed using high–performance liquid chromatography (HPLC) analysis. The endeavor was to quantify degradation of embelin under various stress conditions. There is no report yet on these aspects for embelin.

The dried roots of E. ribes were obtained from local market of Mumbai, India and at Khalsa College, Mumbai; a voucher specimen was deposited in Medicinal Natural Products Research Laboratory, Institute of Chemical Technology, Mumbai. All the chemicals and solvents employed were of Analytical grade and procured from Merck Ltd., Mumbai or S. D. Fine Chemicals Ltd., Mumbai. Embelin was isolated from dried berries of E. ribes by an earlier reported method and its identity was confirmed with the aid of spectroscopic data[14]. The isolated compound was analyzed using a reported reverse phase high–performance liquid chromatography method comprising of a mobile phase of water containing 0.1% v/v ortho–phosphoric acid and acetonitrile (10:90) at a flow rate of 1.0 ml/min and employing ultraviolet (UV) detection at 286 nm[15]. Embelin shows a retention time of 7.3 min and the percent purity on the basis of area under curve was found to be 98.3% w/w. Embelin thus obtained was further used as working standard and subjected to stress degradation studies.

For quantification purpose, a stock solution of 1.0 mg/ml of embelin was prepared in methanol and stored in refrigerator. A set of standard solutions was prepared by diluting aliquots of the stock solution, with methanol to give concentrations ranging from 10.0 to 100.0 μg/ml. The calibration graphs were obtained in triplicate by plotting the peak areas against concentration of analyte and were found to be linear (equation of linearity: y=82559x−86459 with r2=0.994).

To study the stability of embelin in solution, two different concentration solutions of 10 and 100 μg/ml were prepared from stock solution and stored at room temperature in tightly capped volumetric flasks protected from light for 6.0, 12.0, 24.0, 48.0 and 72.0 h, respectively. They were then analysed by HPLC and the chromatograms obtained were analysed for additional peaks, if any. The percentage relative standard deviation (%RSD) for the samples analysed at different elapsed assay times was found to be <2%, which proved the stability of the drug in solution state. In order to determine its susceptibility to different stress conditions embelin, was subjected to forced degradation studies under severe conditions of acid, base, oxidation, heat and light.

For oxidative degradation studies accurately weighed 10 mg of embelin was dissolved in 100 ml of methanol. Subsequently, to each ml of the resultant solution 1 ml of hydrogen peroxide of concentrations 0.3, 3.0 and 30.0% v/v were added to three different tubes containing 1 ml of the stock solution and incubated in dark for 2 h and then the solution was heated in boiling water bath for 1 h to remove the excess hydrogen peroxide. The volume of the resultant solution was made up to 10 ml with methanol and analysed by HPLC in triplicate for measuring oxidative degradation.

On treating the solution with 1, 0.1 and 0.01 N HCl for 2 h, the area of the peak corresponding to embelin decreased and an additional peak was observed at Rt 8.9 min (fig. 2a), indicating that embelin undergoes degradation under acidic conditions. However, the drug was found to be less susceptible to alkaline medium. On treating the solution with 1, 0.1 and 0.01 N NaOH for 2 h, the area of the drug peaks shows decrease in concentration when treated with 1N NaOH, however, no significant decrease was observed when treated with lower concentrations of alkali (fig. 2b). Embelin also undergoes oxidative degradation in presence of 0.3, 3.0 and 30.0% w/v of hydrogen peroxide when exposed for 2 h and the HPLC chromatogram shows an additional peak at Rt 2.5 min (fig. 2c). Exposure to dry heat indicated that the sample degrades completely when heated to a temperature of 90° for 15 min, degrades slowly when kept at 80° for 1 h and remains stable when kept at 60° for 24 h. Embelin was stable when exposed to sunlight and UV–254 nm for 24 h (fig. 2d and e). Based on the area under curve the concentration of embelin unaffected was calculated under various stress conditions (Table 1). 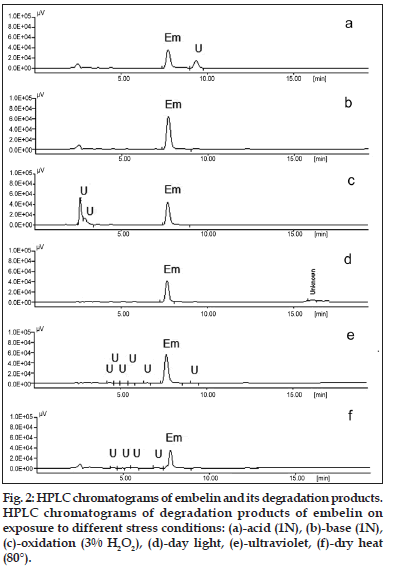 The spectroscopic data of the acid degradation product (Table 2) shows base peak of acid degradation product to be M+15 of the parent compound indicating addition of a methyl group to the parent structure which remains unaltered as observed from mass spectrometry fragmentation peaks at 169.1 and 141.1 (fig. 3). The proton nuclear magnetic resonance spectroscopy and carbon nuclear magnetic resonance spectra shows a peak at δ 3.86 and δ 56.5 respectively, corresponding to formation of a methoxy group, indicating that one of the two hydroxyl groups of embelin has undergone etherification. Since the hydroxyl group present at C–2 of embelin is sterically hindered by the undecyl chain present on adjacent C–3 carbon, it was concluded that the 5–hydroxyl group of embelin must have undergone etherification to form 2–hydroxy–5–methoxy–3–undecyl–1,4–benzoquinone (methyl ether of embelin).

Stress degradation studies on embelin were carried out and it was found that embelin was susceptible to oxidative, acid and to lesser extent thermal degradation. Embelin when treated with 1 N HCl for 2 h undergoes 30% degradation as compared to 1 N NaOH which shows only 6% degradation. It also undergoes 63% degradation when stored in presence of oxidizing agents such as 30% H2O2 indicating its liability to oxidizing agents. When stored in dry heat at a temperature of 80° for 1h the compound undergoes 60% degradation (fig. 2f). The HPLC technique employed for its estimation is a good measure for indicating stability of embelin, since it resolves the degradation products under all stress conditions. It was observed that embelin etherifies when stored in alcohol (methanol or ethanol) in presence of acid to form corresponding ethers of embelin. (spectroscopic data for the ethyl ether is not mentioned). These findings may help in formulation studies of the product considering its applications in modern as well as traditional medicine. When stored under acidic condition care should be taken to use a solvent other than alcohols to prevent etherification. The relevance of these studies in predicting the stability of embelin in Ayurvedic formulations is that they are known to contain self–generated alcohol which under acidic conditions may undergo etherification to form corresponding ether of embelin. In conclusion, the stress degradation studies on embelin have been carried out, which may provide an insight for its stability and storage considering the formulation aspects of modern medicine. 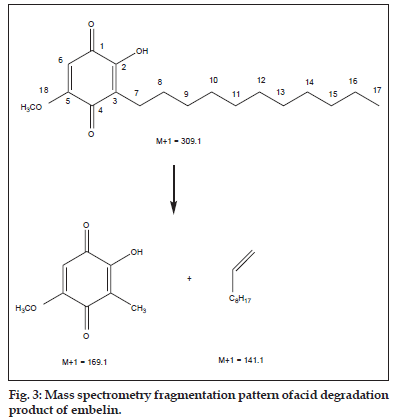 The authors thanks to the University Grants Commission- Special Assistance Program for providing financial assistance for this project and to Prof. H. M. Pandit, Khalsa College, Mumbai for plant material authentication.