An attempt has been made to develop buccoadhesive bilayered tablets comprising of drug containing bioadhesive layer and drug free backing layer to release the drug for extended period of time with reduction in dosing frequency. Tablets of terbutaline sulphate were prepared by direct compression method using bioadhesive polymers like Carbopol 934P, Methocel K4M, Methocel K15M and sodium carboxy methyl cellulose either alone or in combinations with backing layer of ethyl cellulose. The physical characteristics, swelling index, surface pH, in vitro bioadhesion strength, and in vitro release of formulated tablets were shown to be dependent on characteristics and composition of bioadhesive materials used. The modified in vitro assembly was used to measure and compare the bioadhesive strength of tablets with fresh porcine buccal mucosa as a model tissue. The maximum bioadhesive strength was observed in tablets formulated with Carbopol 934P alone and strength decreases with decrease in its content. The tablets were evaluated for in vitro release in pH 6.8 phosphate buffer for 10 h using a standardized dissolution apparatus. In order to determine the mode of release, the data was subjected to Korsmeyer and Peppas diffusion model. All the formulations followed non-Fickian release mechanism. Carbopol 934P and Methocel K4M in the ratio of 1:1 could be used to design effective and stable buccoadhesive tablets of terbutaline sulphate.

Buccal drug delivery has been considered as an alternative to oral dosing for compounds subjected to degradation in the gastrointestinal tract or to hepatic first pass metabolism [1]. Buccal drug delivery offers a safer mode of drug utilization, since drug absorption can be promptly terminated in cases of toxicity by removing the dosage form from the buccal cavity [2].

Terbutaline sulphate is a selective β2 adrenergic agonist. Because of its selectivity for β2-adrenoceptors, it produces less cardiac stimulations [3]. Terbutaline sulphate is variably absorbed from the gastrointestinal tract and about 60% of the absorbed dose undergoes first-pass metabolism by sulphate conjugation in the liver and the gut wall [4]. The oral bioavailability of terbutaline is 14.8% and half-life is 3 to 4 h [5]. Hence, it was considered as suitable candidate for administration via buccal route. There are two situations in which oral β adrenergic agonists are used frequently. First, in young children (< 5 years old) who cannot manipulate metered does inhalers yet have occasional wheezing with viral upper respiratory infections, brief courses of oral therapy are well tolerated and effective. Second, in some patients with severe asthma exacerbations, any aerosol, whether delivered via a metered does inhaler or a nebulizer can be irritating and cause a worsening of cough and bronchospasm. In this circumstance, oral therapy with β2 adrenergic agonists can be effective [6].

The aim of the present study was to design buccoadhesive bilayered tablets to release the drug unidirectionally in buccal cavity for extended period of time in order to avoid first-pass metabolism for improvement in bioavailability, to reduce the dosing frequency and to improve patient compliance.

The buccoadhesive bilayered tablets were prepared using different polymers either alone or in combinations with varying ratios as summarized in Table 1. Bilayered tablets were prepared by direct compression procedure involving two consecutive steps. The buccoadhesive drug/polymer mixture was prepared by homogeneously mixing the drug and polymers in a glass mortar for 15 min. Magnesium stearate (MS) was added as a lubricant in the blended material and mixed. The blended powder was then lightly compressed on 8 mm flat faced punch using single punch tablet compression machine (Cadmach, Ahmedabad), the upper punch was then removed and backing layer material ethyl cellulose was added over it and finally compressed at a constant compression force.

Formulae for the preparation of buccoadhesive tablets of terbutaline sulphate.

All the tablet formulations were evaluated for uniformity of weight, drug content and content uniformity as per IP method. Friability was determined using Roche friabilator while hardness was measured by Pfizer hardness tester.

Surface pH of the buccoadhesive tablets [9]

Buccoadhesive tablets were left to swell for 2 h on the surface of an agar plate. The surface pH was measured by means of a pH paper placed on the core surface of the swollen tablet. A mean of three readings was recorded.

The influence of technologically defined condition and difficulty in simulating in vivo conditions has led to development of a number of in vitro release methods for buccal formulations; however no standard in vitro method has yet been developed. Standard USP or BP dissolution apparatus have been used to study in vitro release profile using both rotating paddle and basket [13]. in vitro release rate study of buccoadhesive tablets of terbutaline sulphate was carried out using the USP XXIV rotating basket method at 37±0.5° and 100 rpm. Study was conducted in triplicate.

Each tablet was inserted in a metal die having a central hole of 8 mm in diameter so that the drug could be released only from the upper face of the tablet. Medium used for the release rate study was 500 ml of phosphate buffer pH 6.8. Samples were withdrawn at predetermined time intervals and replaced with fresh dissolution medium. The samples were filtered (Whatman filter paper no. 42) and assayed spectrophotometrically at 276 nm (Shimadzu UV 2401 PC, Japan).

The optimized formulation (F2) was subjected to stability testing at 40±2o, 75±5% RH for three months. Tablets were evaluated periodically for bioadhesion strength and in vitro drug release. Results were analyzed by One-way ANOVA followed by Dunnett test. Differences were considered statistically significant at p<0.05.

The main aim of this work was to develop buccoadhesive bilayered tablets to release the drug at mucosal site in unidirectional pattern for extended period of time without wash out of drug by saliva. CP, HPMC K4M, HPMC K15M and NaCMC were selected as buccoadhesive polymers on the basis of their matrix forming properties and mucoadhesiveness while ethyl cellulose, being hydrophobic, as backing material. Ethyl cellulose has recently been reported to be an excellent backing material, given its low water permeability and moderate flexibility [14].

All the formulations passes test for weight variation content uniformity and showed acceptable results with respect to drug content (98.91-101.10%) and % friability (0.15-0.75%). Buccoadhesive tablets containing CP showed hardness in the range of 8.98 to 10.98 kg/cm2 and it decreased with increasing amounts of HPMC. The hardness of the tablets containing NaCMC was much lower, ranging from 2.20 to 8.98 kg/cm2 and increased with increasing amounts of HPMC or CP. The difference in the tablet strengths are reported not to affect the release of the drug from hydrophilic matrices. Drug is released by diffusion through the gel layer and/or erosion of this layer and is therefore independent of the dry state of the tablet [15].

Tablets of all the formulations except F1 had shown a surface pH values in the range of 5 to 7 that indicates no risk of mucosal damage or irritation. Tablets of formulation F1 had shown lower surface pH which is due to presence of higher amount of polyacrylic acid. These observations reflect that CP alone can not be incorporated in the designing of buccoadhesive tablets.

The bioadhesive property of buccoadhesive tablets of terbutaline sulphate containing varying proportions of polymers was determined with an insight to develop the tablets with adequate bioadhesiveness without any irritation and other problems. The bioadhesion characteristics were found to be affected by the nature and proportions of the bioadhesive polymers used as seen from fig. 1. The highest adhesion force i.e. highest strength of the mucoadhesive bond was observed with the formulation F1 containing only CP, this followed by F4 and F7 formulations containing CP:HPMC K4M and CP:HPMC K15M, respectively. The reason for such findings might be ionization of CP at salivary pH which leads to improved attachment of the device to mucosal surface. Adhesion force decreased as another polymer is mixed with CP. Tablets of formulation F19 containing NaCMC alone showed least adhesion force than tablet of all other formulations, which might be due to low viscosity of the NaCMC. These observations indicate that the bioadhesive strength of CP is much more than NaCMC. 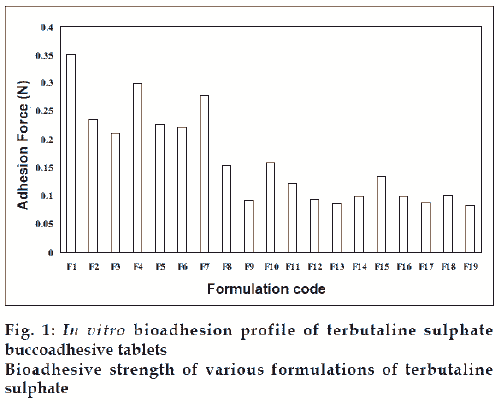 in vitro drug release studies revealed that the release of TS from different formulations varies with characteristics and composition of matrix forming polymers as shown in figs. 2-6. The release rate of terbutaline sulphate decreased with increasing concentration of HPMC K4M and HPMC K15 M in F2 to F7 and F11 to F18, respectively. These findings are in compliance with the ability of HPMC to form complex matrix network which leads to delay in release of drug from the device. CP is more hydrophilic than HPMC; it can swell rapidly, therefore decrease of CP content delays the drug release in F2 to F7 [15]. Drug release rate was increased with increasing amount of hydrophilic polymer. The maximum cumulative percent release of terbutaline sulphate from formulation F1 could be attributed to ionization of CP at pH environment of the dissolution medium. Ionization of CP leads to the development of negative charges along the backbone of the polymer. Repulsion of like charges uncoils the polymer into an extended structure. The counterion diffusion inside the gel creates an additional osmotic pressure difference across the gel leading to the high water uptake. This water uptake leads to the considerable swelling of the polymer. The continued swelling of polymer matrix causes the drug to diffuse out from the formulation at a faster rate [8]. Formulations F8, F10, F12, F13 and F17 showed relatively high rate of release of terbutaline sulphate which is due to rapid swelling and erosion of NaCMC. Further, the increase in rate of drug release could be explained by the ability of the hydrophilic polymers to absorb water, thereby promoting the dissolution, and hence the release, of the highly water soluble drug. Moreover, the hydrophilic polymers would leach out and hence, create more pores and channels for the drug to diffuse out of the device [2]. Formulation F19 which contains NaCMC alone and F9 with CP and NaCMC gets eroded during dissolution study before stipulated study period. Thus higher concentration of NaCMC can not be incorporated into such formulations for sustaining the release. 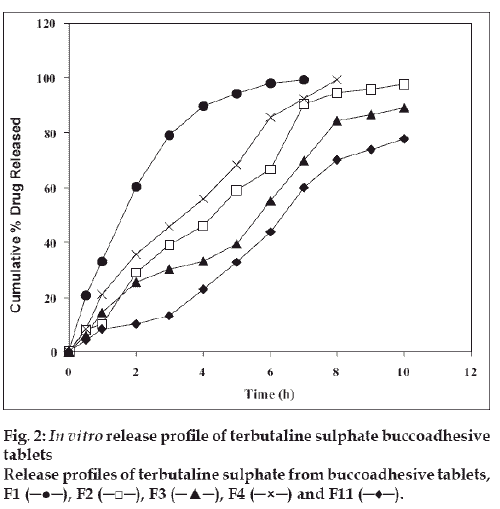 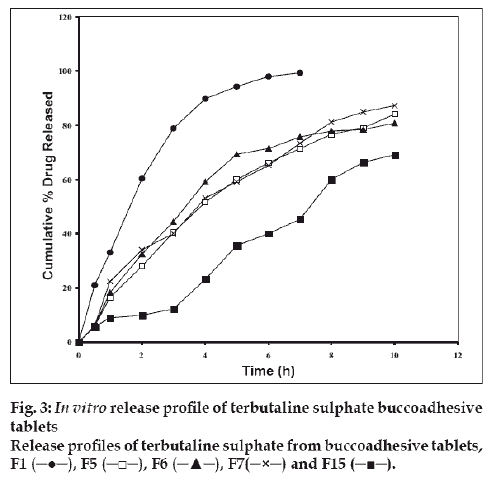 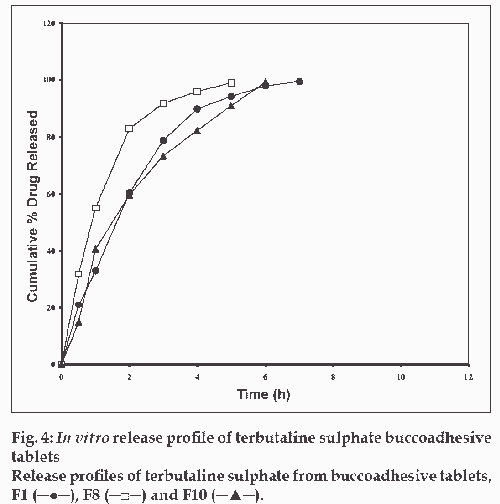 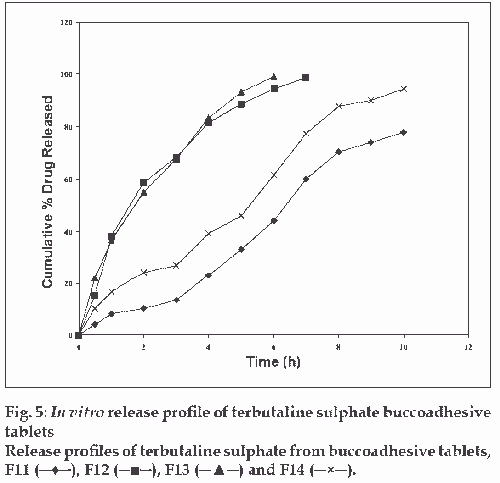 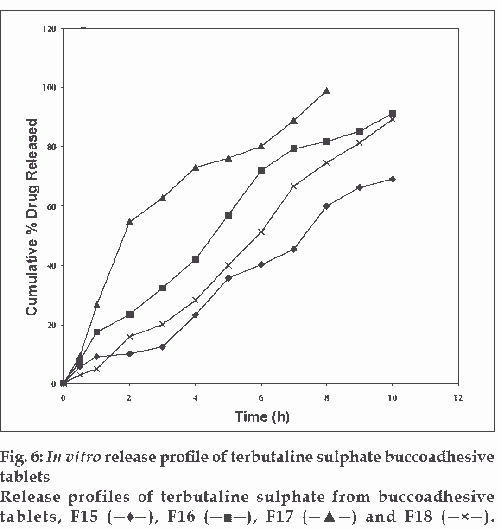 To examine further the release mechanism of terbutaline sulphate from buccoadhesive tablets, the results were analyzed according to the equation [8,11], Mt/M∞= Ktn

The obtained values of n lie between 0.5 and 1.0 in all formulations for the release of terbutaline sulphate, indicating non-Fickian release kinetics, which is indicative of drug release mechanisms involving a combination of both diffusion and chain relaxation. No statistically significant differences were observed in bioadhesion strength and release rate of optimized formulation (P>0.05).

In light of aforementioned discussion it can be concluded that formulation F2 could be used to release the terbutaline sulphate unidirectionally in buccal cavity for extended period of time without the risk of mucosal irritation.

The authors wish to thanks Management, Vidarbha Youth Welfare Society, Amravati for providing all possible facilities at IPER, Wardha. Also thanks to AICTE, New Delhi for providing junior research fellowship to one of the author.