Flaveria trinervia (Asteraceae) is a dichotomously branched herb. Leaves are opposite, oblong, auricled at base, and dentate. The plant is native to Australia and is widely distributed in Chengalpattu, Coimbatore, Dharmapuri, Salem, Tiruchirappalli and Tirunelveli (Tamil Nadu). It is reported that the leaf juice of the plant is used to overcome jaundice and the extract of the plant leaf is proved as hepatoprotective [1-2]. It is also claimed to be useful in skin diseases [1]. Patuletin-3-0-β-glucoside and sulfur compounds are reported in the plant [3-4]. Flaveria trinervia leaf extract consists of flavonoid and has proven hepatoprotective, antioxidant properties [2]. It is used in skin diseases. The present study was taken up to screen the wound healing activity of the methanol extract of Flaveria trinervia leaf.

The plant material was collected from Tirunelveli, Tamil Nadu, in January 2003 and authenticated by the Survey of Medicinal Plants unit (CCRAS), Palayamkottai, Tamil Nadu. A voucher specimen of the plant was deposited in the department of pharmacy for future reference. Dried and coarsely powdered plant leaves were extracted with methanol in the cold (72 h). The methanol extract was concentrated under reduced pressure and dried. The percentage yield of extract was 13.5% w/w. The leaf paste was prepared as 5% w/w with aqueous base (polyethylene glycol and emulsifying wax).

The wound healing activity was studied, as described by Udupa et al [5]. Experimental protocols were approved by the Institutional Animal Ethics Committee. Albino mice of either sex were used as animal model for the study. An excision wound was inflicted by cutting away approximately 500 mm2 full thickness of shaved skin of a predetermined area on the anterio-dorsal side of each mouse. The wounded mice were divided into three groups of six each. They were kept in individual cage. The control group (group I) did not receive any treatment. In one of the experimental groups (group II), the leaf paste (5% w/w) was applied on the wound with a fine brush, daily, till the wound was completely healed. A positive control group (group III) of mice received topically 5% w/w povidone-iodine ointment (Betadine, Win Medicare Ltd.) in an identical manner. Wound contraction rate was monitored by planimetric measurement of the wound area once in 4 d. This was done by tracing the wound surface on a graph paper. Reduction in the wound area was expressed as percentage of original wound area. Epithelialisation time was noted as a number of days, after wounding, required for the scar to fall off leaving no raw wound behind.

The wound healing activity was studied, as described The wound contraction and epithelialisation was faster in Flaveria trinervia leaf paste applied mice when compared to control (Table 1, Fig. 1). The leaf paste adhered to the wound as a covering. In the first two days after wounding, fluid was oozing from the untreated wounds (control), and to some extent, from povidone-iodine ointment treated wounds. But in the case of Flaveria trinervia leaf paste treated wounds, the drug adhered onto the wound and blocked the discharges from the wound within a few hours after the application. In the povidone-iodine treated mice, the wounds were completely healed in less than 18 d. The Flaveria trinervia leaf paste treated wound healed after 22 d, whereas in the control animals, it took more than 30 d. On d 18, the wound contraction was 90% in the extract treated mice, whereas it was only 76% in the control. On d 22, there was no raw wound behind in the extract treated group. The plant has moderate wound healing property, but it was less effective than povidone-iodine ointment. The wound healing activities of the extract may be attributed to the antioxidant activity of flavonoid present in the extract [6]. Lipid peroxidation is an important process in several types of injuries like burns, infected wounds and skin ulcers [7-9]. Hence, a drug that inhibits lipid peroxidation is believed to increase the viability of cells by improving the circulation, preventing cell damage, and promoting DNA synthesis. The plant extract is known to reduce lipid peroxidation, thereby preventing or slowing the onset of cell necrosis [2,10]. Thus, the ability of the plant to enhance epithelialisation and wound contraction may be related to the prevention of lipid peroxidation.

*All values are average of six determinations±standard deviation. *% wound contraction is given within parenthesis 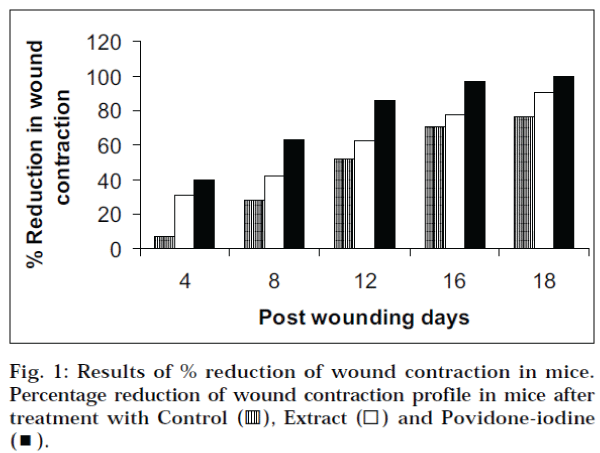 Fig. 1: Results of % reduction of wound contraction in mice.