The degradation behavior of cefixime trihydrate was investigated under different stress conditions of acidic hydrolysis, alkaline hydrolysis and oxidation using spectrophotometry. Stability indicating spectrophotometric methods were developed that could separate the drug from its degradation products formed under these stress conditions. The UV spectral characteristics of the drug and degraded products were quite different and zero and first order derivative ultraviolet spectrophotometric methods were used to study the extent of degradation. Cefixime trihydrate was found to degrade extensively under experimental conditions. The methods were validated by establishing the linearity, inter and intraday precision, accuracy, selectivity and specificity.

The need to develop a stability indicating method using stress degradation has been recommended by International Conference of Harmonization [1]. The stress conditions should include the effect of temperature, humidity, light, oxidizing agents and susceptibility across a wide range of pH values. The aim of the current study was to study the degradation behavior of cefixime trihydrate (CEF) under a few ICH prescribed conditions and to develop validated stability indicating spectrophotometric assay methods.

CEF is an orally active third generation semi synthetic cephalosporin. Chemically, CEF is (6R,7R)- [ [(Z)- 2-(2-aminothiazol-4-yl)-2- [(carboxymethoxy)imino] acetyl]amino]-3-ethenyl-8-oxo-5-thia-1-azabicyclo [4.2.0]pet-2-ene-2-carboxylic acid trihydrate [2]. CEF is official in USP [2], BP [3] and EP [4]. The three pharmacopoeia describe ion pair HPLC method for estimation of cefixime from bulk drug and formulation. Only a slight change in the pH of mobile phase was perceived among the three techniques. Literature survey revealed that RP-HPLC method for determination of cefixime in biological fluids [5] and HPTLC method for determination of cefixime in presence of ceftriaxone and cefotaxime [6] are reported but these methods could not be used as stability indicating methods.

A Shimadzu 1601 UV/Vis spectrophotometer with matched 1 cm quartz cuvettes was used for the spectral measurements. The UVPC software was used for all the calculations. Silica gel 60F 254 precoated plates from Merck Ltd. were used for TLC studies. Standard bulk drug sample of cefixime trihydrate was provided as gift sample by Dalas Biotech Ltd., Alwar, Delhi. All other reagents used were of AR grade.

Stock solution of CEF (1000 μg/ml) was prepared in methanol. Suitable aliquots ranging from 0.01 to 0.25 ml were taken and diluted to 10 ml with water to give concentration in the range of 1 to 25 μg/ml.For all degradation studies, CEF at a concentration of 1 mg/ml was used. The degradation was done under strong, moderate as well as mild conditions. The samples were withdrawn initially and then after at regular time intervals. The degradation was checked using TLC. The aliquots withdrawn were suitably diluted with water to get the working solutions for spectrophotometric study.

For analysis of degraded samples, 1 ml of the degraded solution was withdrawn and diluted to 10 ml with water. The initial absorbance of the drug, at zero time was considered as 100% concentration and degradation was correlated with this concentration. To check decomposition, TLC was performed on Silica gel 60F 254 precoated plates using benzene: methanol: glacial acetic acid (1:1:1) as the mobile phase and spots were detected in an iodine chamber. Validation of the methods was done by studying various parameters. Linearity was studied by analyzing ten concentrations of the drug prepared in the methanol in the range of 4-24 μg/ml in triplicate and fitting the data into best fitted curve. Precision was verified by repeatability and intermediate precision studies. Repeatability was established by analyzing three different concentrations in triplicate on the same day whereas intermediate precision was checked by repeating the studies on different days. Accuracy of the method was tested by adding three concentrations of standard drug solution sequentially to a mixture of degraded solution and determining the recovery of the added drug. Specificity of the methods towards the drug was studied by analyzing a mixture containing standard drug and the stressed samples.

CEF has a lactam and amide linkage in its molecular structure making it amenable to acidic and basic hydrolysis. The lactam ring in cephalosporins is often opened during hydrolysis and the product formed may undergo side reactions like condensation [7] or dimerization [8] giving compounds totally different in their chemical properties. The TLC studies showed that Rf value for the standard drug was 0.48. The HCl and H2O2 treated solutions appeared at 0.68 and 0.70 respectively whereas the NaOH treated solution could not be detected. The spectroscopic studies of the stressed samples of CEF suggested following behavior of the drug under stress conditions. 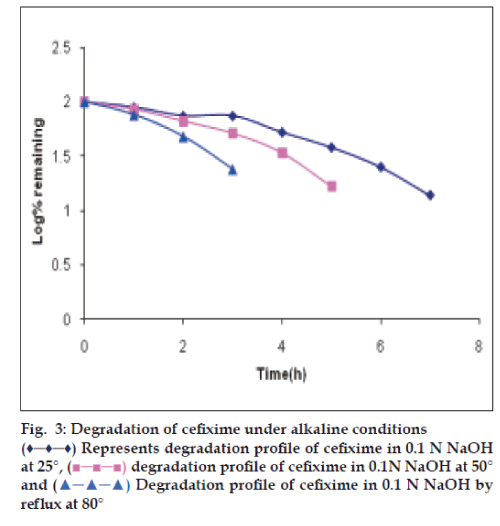 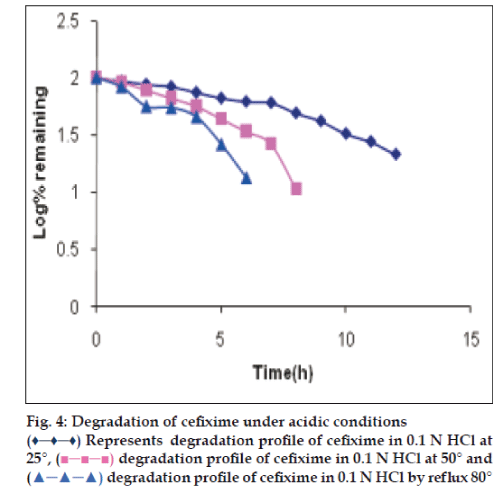 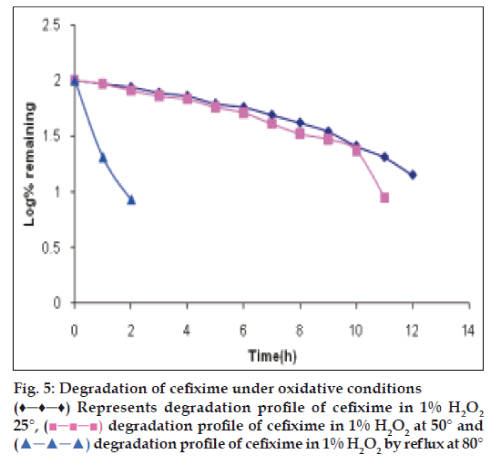 The spectral characteristics of the drug were totally different from its degradation products so zero order and first derivative UV method could be used to estimate CEF in presence of its degradation products. The result of validation studies showed that calibration curve was linear in the range of 4-24 μg/ml. The mean values for slope, intercept and correlation coefficient are reported in Table 1.

The values indicated here are the mean of three values.

The developed methods were found to be precise as indicated by low values (0.44% and 0.83%) for inter and intraday precision respectively. The accuracy was determined by recovery studies of spiked samples. The good recoveries (100±0.45) suggest method to be accurate. The study showed that CEF is susceptible to hydrolytic and oxidative degradations but the developed spectrophotometric method can be used as a stability indicating method to differentiate the drug from its degraded products. Though no attempts were made to identify and quantify the degraded products, the methods can be successfully used to determine the degradation of drug during storage.