Anticoagulants are very useful medications but can also lead to haemorrhagic as well as thromboembolic complications when not used correctly or without proper medical attention. Anticoagulant's complex pharmacology and pharmacokinetics contribute to its narrow margin of safety. Pharmacist's unique knowledge of pharmacology, pharmacokinetics and interactions makes them well-suited to assist patients in maintaining safe and effective anticoagulation. Successful anticoagulation therapy implies fewer incidences of therapeutic failures and bleeding complications. The anticoagulation management service staffed by clinical pharmacists is a service established to monitor and manage oral and parenteral anticoagulants. In this research work, 40 patients each were included in the intervention and the control groups. In the intervention group, patient's knowledge score on anticoagulation increased from an average of 5.6±3.2 to 13.8±0.94 (P=0.000) after clinical pharmacist's counselling, whereas in the control group there was no significant improvement in patient's baseline knowledge over the knowledge score at the end of the study (8.0±1.59 vs. 8.3±2.6) (P=0.218). In the intervention group, 73.45% of the international normalised ratio test results were within the therapeutic range, 8.45% supratherapeutic and 18.5% subtherapeutic during the 6 months data collection period. The corresponding data for the control group were 53.2 (P=0.000), 18.4 (P=0.000) and 28.4% (P=0.002), respectively. Forty four adverse drug reactions (ADRs) related to anticoagulants were identified in the intervention group as compared to 56 in the control group. These results revealed that the clinical pharmacist's involvement in the anticoagulation management improved the therapeutic outcome of patients and demonstrate the benefits of clinical pharmacist guided anticoagulation clinics in India.

Anticoagulants are substances that prevent coagulation; that is, they stop blood from clotting. A clot can create a potentially dangerous medical condition if it causes a blockage of blood flow to a vein or artery. Anticoagulants act by inhibiting the hepatic vitamin K dependent synthesis of coagulation factors II (prothrombin), VII, IX and X and of the anticoagulant protein C and its cofactor protein S[1]. A group of pharmaceuticals called anticoagulants can be used as a medication for thrombotic disorders[2].

Anticoagulants are commonly used for both treatment and prevention of cardiac diseases, cerebral vascular accidents, and thromboembolism in the inpatient and outpatient settings. Their use or misuse carries a significant potential for patient harm. Subtherapeutic levels can increase the risk of thromboembolic complications while supratherapeutic levels can increase the risk of bleeding complications. Anticoagulants have been implicated in adverse drug events due to many factors such as complexity of dosing and monitoring, patient compliance, and numerous drug–drug and drug–food interactions. The demand for anticoagulation services is increasing, particularly in the elderly population[3,4].

The anticoagulation management service (AMS) is a service established to monitor and manage oral and parenteral anticoagulants that decrease formation of blood clots[5]. In a survey of a pharmacist−managed anticoagulation clinic, to find out patients’ perceptions of pharmacist involvement with anticoagulation services, it was indicated that majority of patients were comfortable with pharmacists providing monitoring and dosage adjustments of warfarin[6,7]. When the clinical pharmacists assume responsibility and accountability for achieving therapeutic goals, they are called upon to be more than consultants.

During the course of anticoagulation therapy, a variety of health−care professionals are involved in patient care. The pharmacist’s role is multifactorial and can include monitoring, dosing and provision of drug information, patient education, drug interaction screening and research[8,9]. Pharmacist guided anticoagulation clinics play an important role in managing anticoagulation therapy for both hospitalised patients and outpatients in western countries[10]. Trained in the basic pathophysiology of blood clotting and the essentials of clinical clotting disorders, pharmacists bring their expertise in clinical pharmacology and knowledge of drug interactions to the arena of patient management.

These pharmacists evaluate and manage essentially all hospitalised patients treated with warfarin, as well as most patients treated with full dose heparin or low molecular weight heparin. The pharmacists give the attending physicians and house−staff important information about potential drug interactions, in addition to daily dosing recommendations[11]. Many anticoagulation clinics are staffed only by clinical pharmacists, and there is an indication that this practice has led to nothing except excellent care. The multidisciplinary team effort provides truly optimal care for a population of patients having a high level of comorbidity[12].

In a study to assess the anticoagulation knowledge of patients new to warfarin therapy conducted by Winans et al. demonstrated that inpatient warfarin education programme by AMS may empower patients to achieve a larger degree of initial warfarin knowledge than those educated by usual care[13].

It was a prospective randomised controlled study extended over a period of 6 months. Patient data were collected from 1st February 2011 to 31st July 2011. The study was carried out at the Department of Stroke Medicine and at the Department of Cardiology of a tertiary care teaching hospital in Kochi, Kerala, India. The study got ethical clearance from the institutional ethical committee and written informed consent was obtained from all the study participants. The study population consisted of patients admitted to the Departments of Stroke Medicine and Cardiology and who were prescribed warfarin or other oral anticoagulants. Intervention group consisted of all the 41 patients admitted to the department of stroke medicine during the study period and who satisfied the inclusion and exclusion criteria. Forty randomly selected patients from the cardiology ward who were newly started on oral anticoagulants served as the control group. Patient data relevant to the study were obtained by direct interview of the patient and/or caregiver, and from the patient’s medical record and documented in the standardised data collection form.

The percentage of INRs within the therapeutic range for the intervention group was compared with that of the control group. The time within therapeutic range was calculated using the method of ‘The fraction of INRs in the range’, which was calculated by taking total number of INRs within therapeutic range for all patients divided by the total number of INRs checked during the selected time interval i.e., 6 months period[14]. All the patients, after discharge, were followed−up during the entire period of study through telephonic contacts on a weekly basis. The patients were free to call the clinical pharmacist for clarification of any anticoagulation related issues between 8 am and 8 pm thorough an on call mobile allocated by the hospital administration for the AMS. The frequencies of INR monitoring and dose adjustments were based on the patients INR values. If the values were within therapeutic range, the testing frequency was once in every 2 weeks.

The patients inclusion criteria were as follows, patients prescribed warfarin or other oral anticoagulants; patients of age ≥18 years; patients and/or their caregivers (with informed; consent) willing to participate in the study; patients who are able to read and speak English or the local language Malayalam.

The excliusion criteria for the patients were as follows, patients on parenteral anticoagulants; patients with severe renal insufficiency who are on dialysis; patients with active liver disease; patients having visual or hearing impairment.

Frequency distributions and descriptive statistics were used to calculate baseline characteristics of patients. Calculation of the mean and standard deviation were carried out by using statistical calculators. Data was shown as mean±SD and number (%) of patients unless otherwise stated. The significance of the study results were assessed using independent sample t−test and paired sample t−test. A P value of <0.05 was considered statistically significant.

During the study period the most common indication for anticoagulation was found to be the atrial fibrillation followed by the mitral valve replacement in both the groups. Anticoagulants were also prescribed for secondary prevention in stroke patients who had cardiac risk factors. Majority of patients (70%) in the intervention group the target INR was 2.0−3.0 followed by a target INR of 2.5−3.5 in 22.5% of patients and a target INR of 2.0−2.5 in 7.5% of the patients whereas in the control group, 82.5% of the patients had 2.0−3.0 and 17.5% had 2.5−3.5 as their target INR range (Table 4). Thus, the base line characteristics of patients in the both the control and intervention groups were comparable.

Table 4: Indications For Anticoagulation In The Study Patients. 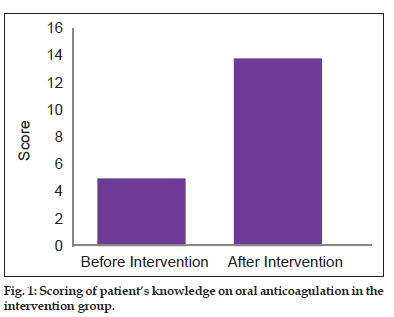 Figure 1:Scoring of patient’s knowledge on oral anticoagulation in the intervention group .

Table 6: adverse drug reactions observed during the study period for the patients in the intervention and control groups. Ffp=fresh frozen plasma.

Assessment of patient satisfaction with the anticoagulation service was carried out using a Questionnaire. The results showed that all the patients were satisfied with the service (Table 8).

Table 7: drug and food interactions observed during the study period in the intervention and control groups. Otc=over the counter, *these nutritional supplements contain small amounts of vitamin k.

Patient knowledge is the key to safe and effective use of warfarin and other oral anticoagulants. Patients should be aware of the indications, monitoring requirements, drug–drug and drug–food interactions and the adverse reactions to watch for. There is a positive relationship between their knowledge and the outcomes of therapy. The present study shows that the patient’s knowledge on oral anticoagulation was improved in intervention group patients and they achieved better therapeutic outcome compared with the control group patients. Thus, this study highlights the role of a clinical pharmacist in improving the overall therapeutic outcome of patients on oral anticoagulants. Hence, a clinical pharmacist driven anticoagulation service can empower patients to achieve better therapeutic outcome with added safety. More such studies are required in India to elucidate and clarify the above results. It is therefore, worthwhile to address these improvements in anticoagulation management and to make an attempt to unify the concept of clinical pharmacist driven anticoagulation clinics in India.