Abiraterone acetate is an androgen biosynthesis inhibitor used in the treatment of prostate cancer. This study focuses on a simple, economical and systematic liquid-chromatographic and mass spectroscopic method to study the stress degradation behavior of abiraterone acetate under various stress conditions along with its validation. The chromatographic separation of abiraterone acetate and its major degradation product is achieved on Capcell PAK C18 MG-III (100×4.6 mm, 3 μm) column using combination of 0.1 % acetic acid and acetonitrile as mobile phase with a flow rate of 1.2 ml/min and the wavelength of detection is selected as 251 nm. The drug was degraded extensively in acidic and basic hydrolysis. A tentative degradation pathway of drug in acidic and alkaline condition was predicted. The developed analytical method was found selective, accurate, precise and robust in accordance with International Conference on Harmonisation guidelines. The method will also suffice the suitability for the assay of abiraterone acetate in bulk and finished products.

Metastatic Castration-Resistant Prostate (MCRP) cancer is a major category of malignance, which is one of the most common cancers in the United States and the second most common cause of cancer death among men. It causes 258 400 mortality rates yearly[1,2]. The therapy for metastatic prostate cancer involves suppressing testosterone production through androgen deprivation therapy. Abiraterone Acetate (ABT), the first compound through the inhibition of adrenal gland production of testosterone, increases the overall survival in Castrate-Resistant Prostate Cancer (CRPC) patients. ABT inhibits the enzymatic activity of steroid 17-alpha-monooxygenase, a member of the cytochrome P450 family that catalyses the 17-alphahydroxylation of steroid intermediates involved in testosterone synthesis from the adrenal glands. ABT is an orally active acetate salt of the steroidal compound abiraterone with antiandrogen activity[3]. According to the available literature, abiraterone was determined using different techniques: Spectrofluorimetry[4], High Performance Liquid Chromatography (HPLC)- fluorescence detection[5], liquid chromatography coupled to Electrospray Ionization-Mass Spectrometry (ESI-MS)[6], Reverse Phase-High Performance Liquid Chromatography (RP-HPLC)/Ultraviolet (UV)[7-10], Liquid Chromatography-Mass Spectrometry (LCMS)/ ESI-MS[11,12] and Ultra Performance Liquid Chromatography-Tandem Mass Spectrometry (UPLC MS/MS) in biological fluids[13,14]. As most of the methods available from literature are bioanalytical methods for biological fluids. Moreover, according to the International Conference on Harmonisation (ICH) guidelines, stress degradation studies for the compounds are mandatory not only to establish the inherent stability characteristics, but also to identify the degradation products. Therefore, there is a large scope for the development of a simple, short and better analytical method for the study of degradation behavior of ABT and also identification of degradant production is very essential. 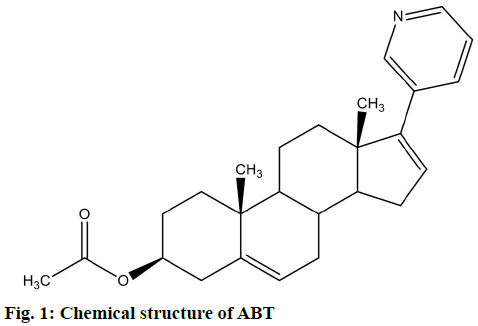 Fig. 1: Chemical structure of ABT

The method so optimized was validated as per ICH Q2(R1) guidelines, 2005[15]. The linearity (0.1-1000 μg/ ml) and precision (50, 100 and 150 μg/ml) studies were conducted. The accuracy studies were accomplished with three pre-delineate spiked concentration levels (80 %, 100 % and 120 %). In robustness study the chromatographic conditions were marginally modified for flow rate (1.1 and 1.3 ml/min); percentage (%) organic phase (87 and 91 %v/v) and detection wavelength (249 and 253 nm). The robustness study was carried at a concentration level of 10 μg/ml of the standard. All the validation data obtained was taken in triplicate.

To confirm that the analytical method is stabilityindicating, ABT was exposed to stress under various conditions to accomplish forced degradation studies[16]. As the present ICH guidelines did not make any statement regarding the detailed degradation conditions in the stress testing, the presently used forced degradation conditions were all based on trial and error. Acidic degradation was performed by refluxing stock solution (1 ml) with 1 ml of 0.1 N HCl for a time of 30 min at 80° in a thermostat, the solution was cooled, neutralised and then diluted as per requirement. Alkaline degradation was conducted by heating stock solution (1 ml) along with 1 ml of 0.1 N NaOH for a period of 30 min at 50°, later it was cooled, neutralised and then diluted as per requirement. During oxidative degradation, stock solution (1 ml) was left in a 10 ml volumetric flask with 1.0 ml of 30 % H2O2 for a period of 30 min at 40°, later cooled and then diluted. Thermal degradation was conducted by exposing a definite quantity of ABT standard in solution state to heat in a hot air oven maintained at 80 continuously for 7 d and the resultant was cooled and diluted before the study. Photolytic degradation was governed by exposing the solid drug sample to light source radiation with a wavelength range of 290-700 nm in the UV chamber, continuously for about 7 d. The sample was spread as a thin layer and sealed with a transparent cover to minimize the effects of the changes in the physical state. The solution was prepared with ACN and further dilution was done with the diluent.

Twenty tablets of each available brands of ABT were procured from the local pharmacy store, weighed and crushed into fine powder. Powder equivalent to 25 mg of ABT was accurately weighed and extracted with mobile phase. The solution was filtered through 0.45 μm membrane prior analysing and the peak area was recorded from the respective chromatogram.

A comparative study of the previously published methods with the present method was summarized in detail in Table 1. In the initial trials the experiments were conducted with different columns such as: Sunfire C18 column (150×4.6 mm, 5 μm), Phenomenex Luna C18 column (250×4.6 mm, 5 μm) and Capcell PAK C18 MG-III (100×4.6 mm, 3 μm). After reviewing the results of column trials, it was found that the peak shape, retention time, tailing factor and column efficiency were found better with Capcell PAK C18 MG-III (100×4.6 mm, 3 μm), hence this column is selected for this method of analysis. In overall reviewing the results of mobile phases, their ratios and the flow rates, mobile phase comprising of 0.1 % acetic acid:ACN (11:89 v/v) and with a flow rate of 1.2 ml/min was selected as the optimum mobile phase for better peak shape, tailing factor and theoretical plates low retention time, etc. The overall analysis was performed with 251 nm as wavelength of detection (fig. 2).

Table 1: Comparison of the Previously Reported Methods with the Present Method 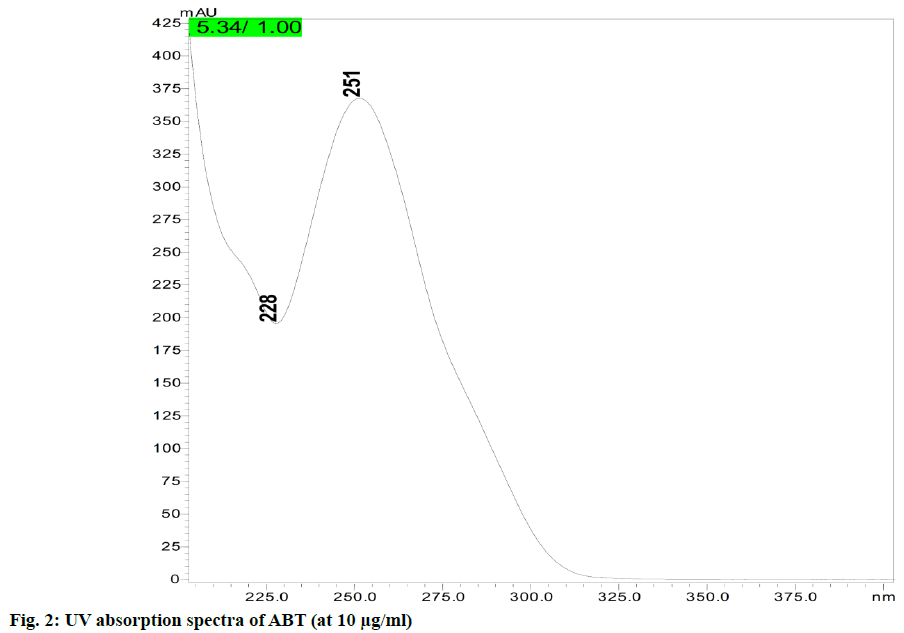 The method was validated as per ICH guidelines. The method shows a linearity range of 0.1-1000 μg/ml, with their percentage Relative Standard Deviation (% RSD) in limits. The linearity data with their linear regression equations and their correlation coefficients, Limit of Detection (LOD) and Limit of Quantitation (LOQ) were clearly presented in Table 2.

Table 2: Linearity of ABT

The method accuracy was demonstrated by the recovery test at three dissimilar concentrations in which known amount of standard was supplemented to aliquots of sample solutions and then diluted to yield the total concentrations of 80, 100 and 120 μg/ml (80 %, 100 % and 120 %) for which % recovery was found to be 97.96 %-99.48 % (Table 3).

Table 3: Precision and Accuracy Studies of ABT

The robustness of the method was estimated by assaying the sample in diverse analytical conditions by deliberately making slight fluctuations from the original condition. From the results (Table 4), it was shown that the system suitability parameters, retention times and the assays for the test solution were not much affected there by signifying that the method is robust.

Table 4: Robustness Study of ABT

Table 5: Forced Degradation Studies of ABT 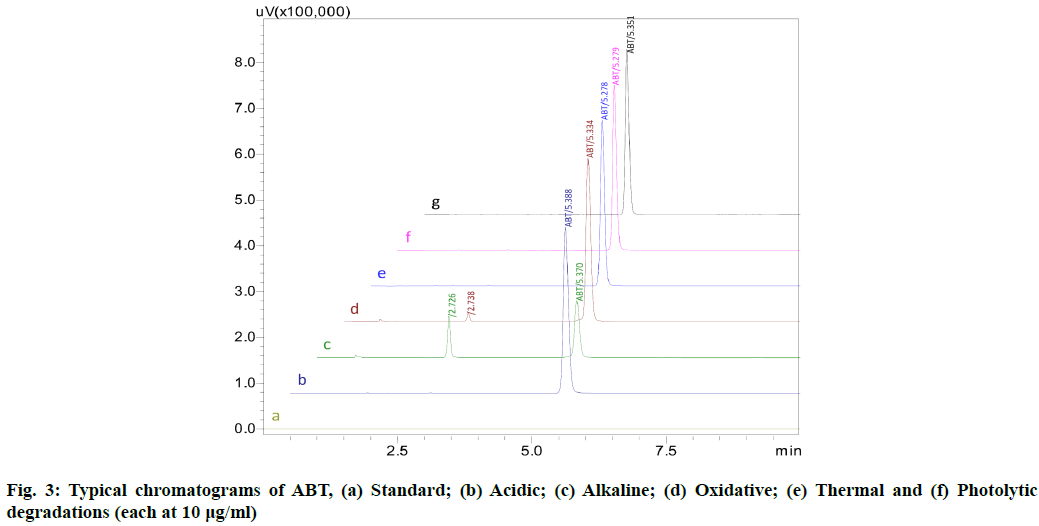 Stress degradation studies for ABT were conducted with different conditions such as acidic, alkaline, oxidative, thermal and photolytic degradations. After the degradations the separation was achieved using HPLC and further the samples were processed for LC-MS study for the characterization of ABT and its degradants (fig. 5-fig. 10). The positive ESI-MS of ABT shows an abundant [M+H]+ ion at m/z 392.3 (fig. 5). 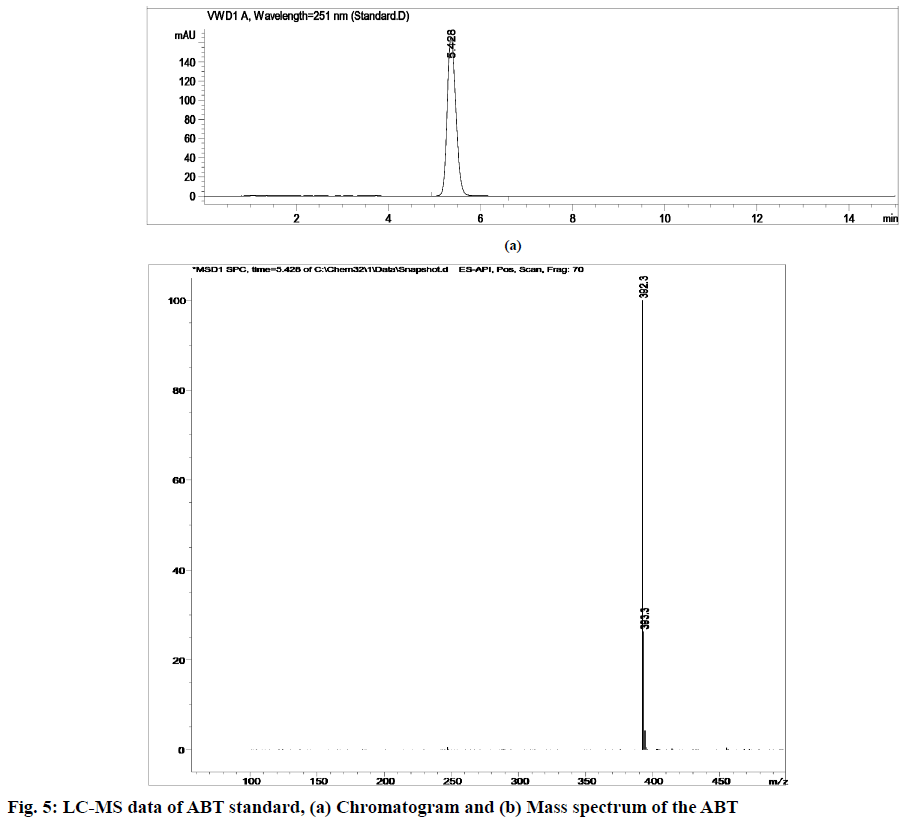 Fig. 5: LC-MS data of ABT standard, (a) Chromatogram and (b) Mass spectrum of the ABT 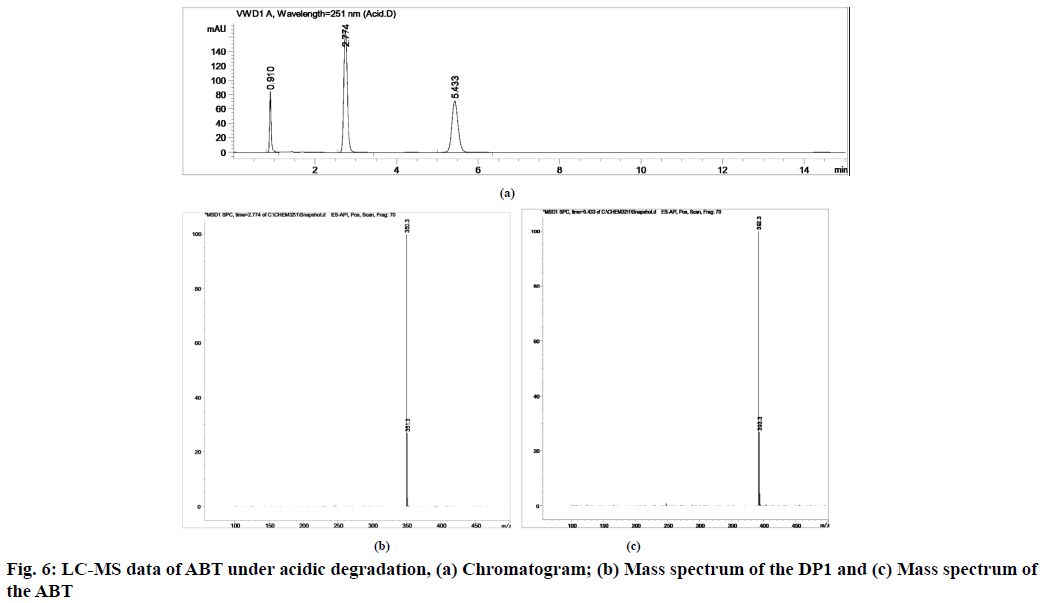 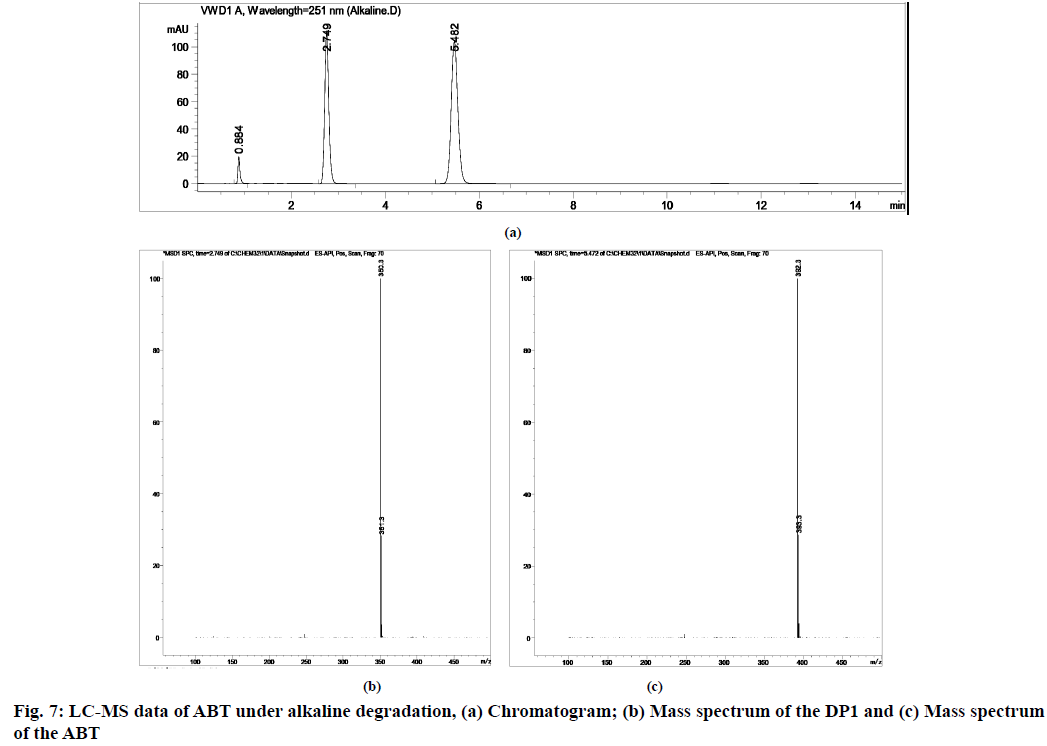 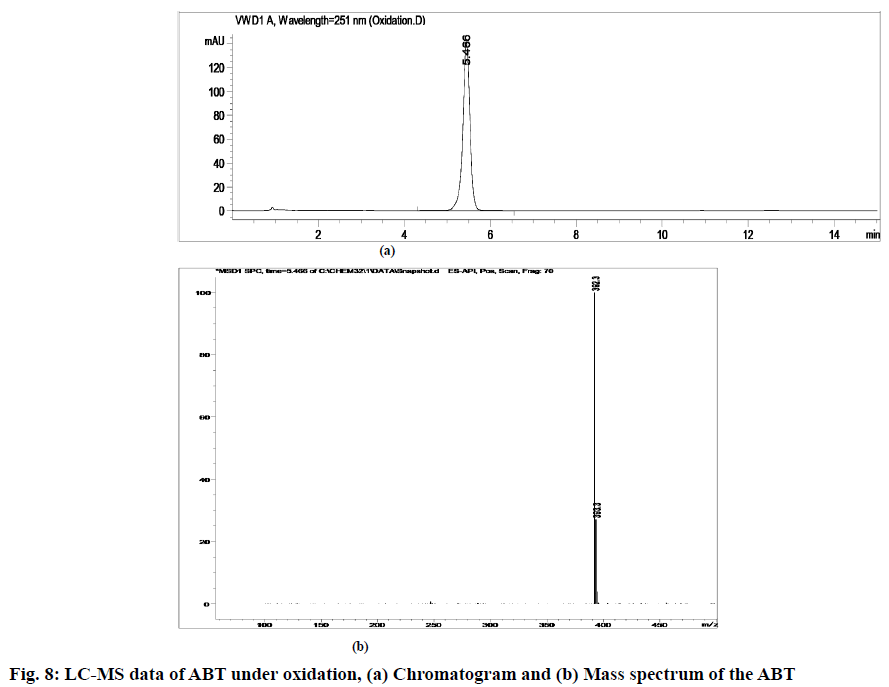 Fig. 8: LC-MS data of ABT under oxidation, (a) Chromatogram and (b) Mass spectrum of the ABT 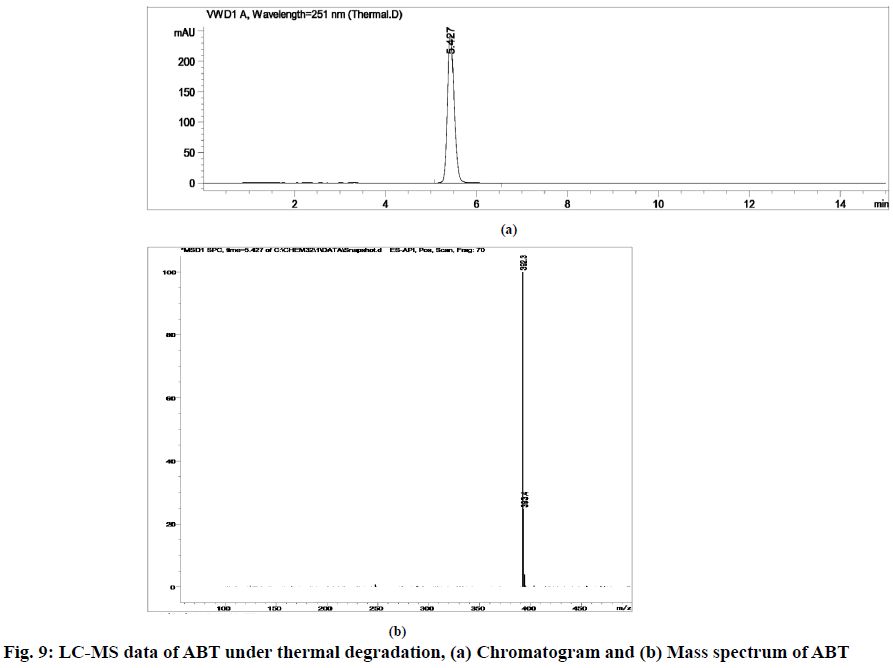 Fig. 9: LC-MS data of ABT under thermal degradation, (a) Chromatogram and (b) Mass spectrum of ABT 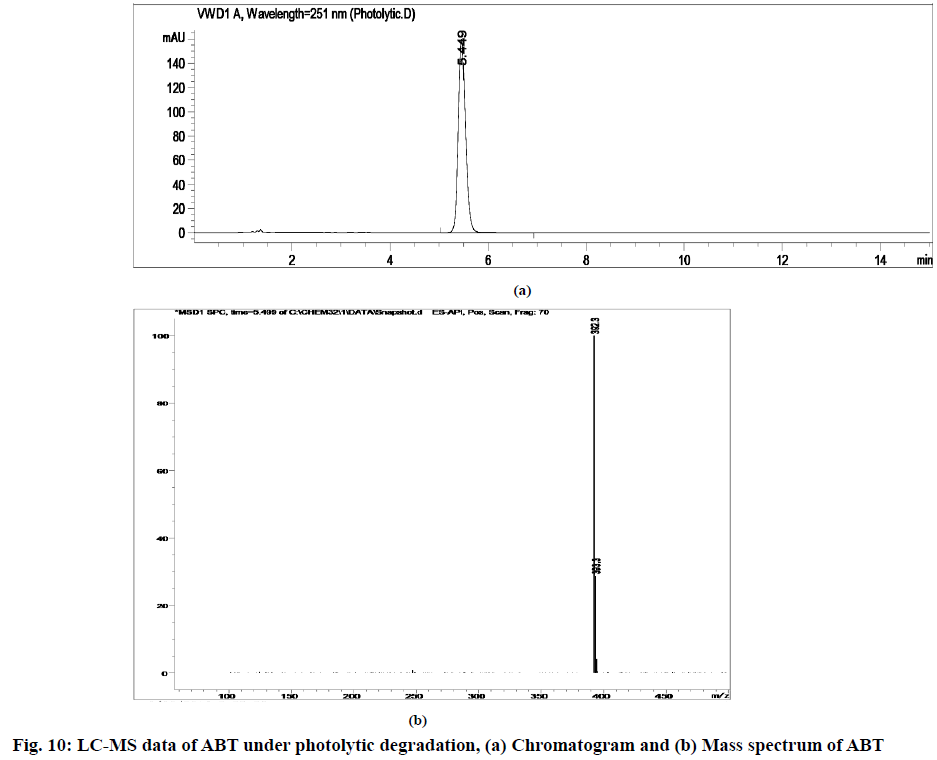 Fig. 10: LC-MS data of ABT under photolytic degradation, (a) Chromatogram and (b) Mass spectrum of ABT 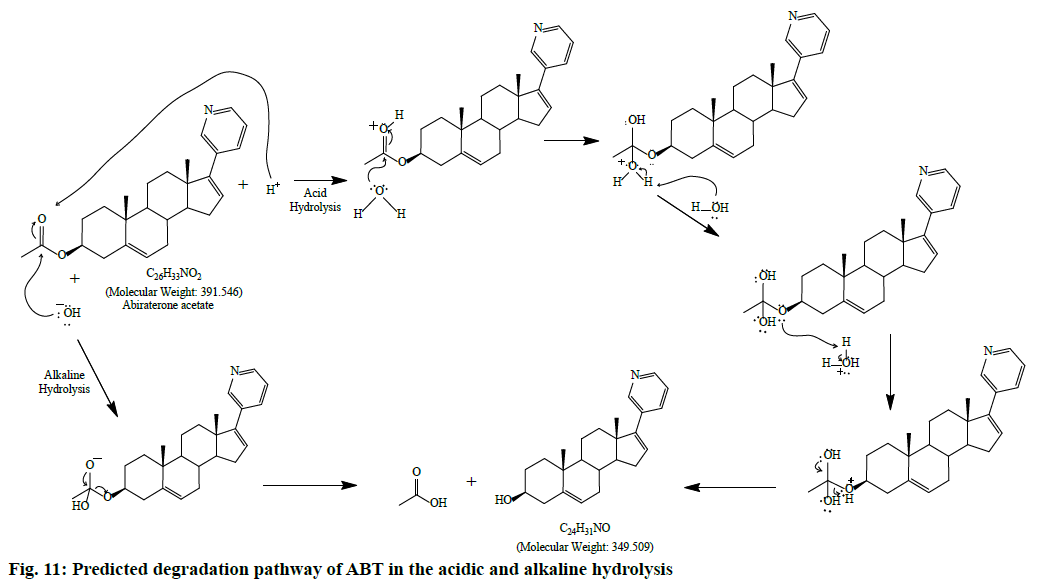 Fig. 11: Predicted degradation pathway of ABT in the acidic and alkaline hydrolysis

The proposed method was applied to the available marketed formulations (ZYTIGA®, XIBRA® and ABIRAPRO®) for the determination of ABT. The % recovery was found to be 97.54 %-98.87 % (Table 6). The resultant chromatograms obtained from the extraction of marketed formulations were shown in fig. 12.

Table 6: Analysis of ABT in Commercial Formulations

In this work, an attempt made to develop a fast simple and robust stability-indicating RP-HPLC compatible with LC-ESI-MS for the determination of ABT in the presence of degradation product which was validated as per ICH guidelines and applied for the determination of ABT in pharmaceutical dosage form (film coated tablets). In the forced degradation studies, it was observed that ABT is more sensitive towards the acidic and slightly towards alkaline environment. From the LCESI- MS study both the acidic and alkaline degradation show the same degradant and were identified thereby providing a prospect for the prediction of degradation pathway. This method can be successfully applied to perform long-term and accelerated stability studies of ABT formulations. This study might also be helpful in the designing of the formulations.