Study on the Chemical Profiling of Fangfeng Tongsheng Pills by HPLC

This study focused on profiling the major components of a complex traditional Chinese herbal preparation composed of seventeen herbs, Fangfeng Tongsheng Pills by HPLC with photodiodearray detection. Based on the optimized protocol, the HPLC fingerprint profiles were established. Within the chromatographic fingerprint, sixteen identified bioactive compounds belonging to iridoid, anthraquinones, flavonoids, triterpenoid, phenol, phenolic acids, alkaloid and chromones were successively separated and twelve was quantitatively determined. The linearity and range, LOD, LOQ, precision, accuracy and stability of the assay were validated according to Chinese pharmacopoeia. The validated data showed that the method was suitable for quality evaluation of the valuable medicine listed in Chinese pharmacopoeia by qualitative and quantitative information in one chromatographic fingerprint.

Fangfeng Tongsheng San (FTS) was first recorded in a book called Huang Di Suwen Xuanming lun [3]. It was composed of seventeen herbs (Radix Saposhnikoviae, Herba Schizonepetae, Mentha haplocalyx, Herba Ephedrae, liquorice, gardenia, Radix et Rhizoma Rhei, mirabilite, talc, Radix Platycodonis, gypsum, Rhizoma Ligustici Chuanxiong, Radix Angelicae Sinensis, white peony alba, Radix Scutellariae, Fructus Forsythiae and Rhizoma Atractylodis Macrocephalae (stir-fried). FTS was used to purge fire and remove toxicity. A lot of pharmacology researches on this prescription have been done by Japanese scientists since 1990s, and have confirmed that FTS had many new pharmacological effects, such as losing weight, reducing plasma lipids and fatty liver, treating arteriosclerosis and hyperlipidemia [4-7]. From the pharmacological researches, the efficacy is associated with its monarch drug, that is Herba Ephedrae, Herba Schizonepetae, Radix Saposhnikoviae and Mentha haplocalyx, and its adjuvant drug, that is gardenia, mirabilite, talc, Radix Platycodonis, Radix Scutellariae, Fructus Forsythiae and Radix et Rhizoma Rhei. Fangfeng Tongsheng pills (FTP) is one of the new dosage forms to improve compliance of patients. Geniposide, ephedrine, 5-O-methylvisammioside and authentic reference herb, Radix et Rhizoma Rhei are applied in the quality evaluation of FTP using separate thin layer chromatography (TLC) techniques in Chinese Pharmacopeia 2010 edition (ChP.2010). It is tedious, unable to provide satisfactory coverage of other key chemical classes. More importantly, there is no quantitative analysis of this preparation. Some related work on FTP preparation by HPLC was reported, however, only single or a few components were determined in these papers [8-10]. Furthermore, the fundamental components of the monarch drugs were not included (i.e., ephedrine derived from Herba Ephedrae and 5-O-methylvisammioside derived from Radix Saposhnikoviae, respectively) which are the key active components. So these methods were inadequate and unable to evaluate the quality of the complex formulation.

Precondition of modernization quality control of TCM patent prescriptions is to make clear what the components are in prescription gradually. Only by this way can we further study the action mechanism of TCM patent prescriptions. 5-O-methylvisammioside, one of the chromones in Radix Saposhnikoviae, is authenticated to have an antipyretic effect and an anti-inflammatory activity [11]. Ephedrine, an alkaloid, has alpha and beta catecholamine effects [12]. Ligustrazine is the active component of Rhizoma Ligustici Chuanxiong, which has strong effect of block vasoconstriction and scavenges oxygen free radicals [13]. Geniposide, a kind of iridoid in Fructus Gardeniae, displays pharmacological action of anti-inflammatory and antithrombus [14]. Paeonol is a phenol which is used for treatment of many diseases such as eczema and pruritus [15]. Hesperidin, baicalin, and quercetin belong to flavonoids, which have the functions of antiinflammation, antiallergy, antivirus and anticancer and others [16]. The phenolic acids possess the antiinflammatory, anticarcinogenic, antibacterial and antiviral activities, like chlorogenic acid, glycyrrhizic acid and ferulic acid [17]. 5 anthraquinones, aloe-emodin, emodin, chrysophanol, physcion and rhein, are main active components in rhubarb. Anthraquinones have purgative activities, analgesic effects, antibacterial effects, antitumor activity, prevention of hepatitis, antioxidant activity [18]. In this paper, 12 active components, ephedrine, geniposide, ferulic acid, 5-O-methylvisammioside, hesperidin, baicalin, paeonol, glycyrrhizic acid, aloe-emodin, rhein, chrysophanol and physcion, representing key chemical classes of the entire formulation were selected as markers for quantitative determination by HPLC. Another 4 components, ligustrazine, chlorogenic acid, quercetin and emodin were identified by comparing the retention time and UV spectra with reference standard. In addition, HPLC fingerprint was also established to assess the quality of FTP. The developed method was proved to be accurate and efficient for profiling major components in FTP.

FTP preparation was ground into powder and then passed through a 20 mesh sieve and a 60 mesh sieve successively. 1.0 g middle particle size powder was extracted by 15 ml methanol using ultrasonic bath for 40 min at 60°. The extract was centrifuged at 15000 rpm for 5 min, and then supernatant was filtered through 0.45 μm micropore film before injecting 20 μl into the HPLC system for analysis.

Gradient elution HPLC method was developed to profile the major components and determine twelve bioactive markers in FTP quantitatively. The method was validated by aspects of specificity, linearity and range, limit of detection (LOD) and limit of quantitation (LOQ), precision and accuracy, according to the requirements of ChP.2010.

Sample extraction conditions, such as extraction method, extraction solvent type, extraction time, extraction temperature, the ratio of extraction solution volume to the amount of sample and the particle size method were designed by univariate factor experimental. The percentage yields of 16 selected markers as well as the number of chromatographic peak were used as the markers for efficiency evaluation.

Ultrasonic extraction was chosen because of its higher extraction efficiency and shorter extraction time than reflux extraction. Methanol, ethanol, hydrous methanol or ethanol (90, 70 and 50%), ethyl acetate and water as extraction solvents were investigated. The results showed methanol as solvent could obtain higher extraction yield of the selected markers and extract more ingredients. Due to FTP containing acid and alkaline compounds, acid or alkaline was added to extraction solvent in order to obtain better resolution, peak shape and higher extract yield. However, the above parameters had no significant change. Moreover, baicalin was unstable and would degrade into baicalein under the action of ultrasound and acid.

Sample uniformity has great influence on the repeatability of determination results, and the smaller the particle size is, the more uniform the sample is. On the other hand, the extraction yields of selected markers were also affected by the particle size. The study showed that too small size of sample would lower the rate of extraction. The reason would be that high sugar content in FTP made the solution sticky and restricted the dissolution of components, when sample was ground too fine. After optimization, the powders passed through a 20 mesh sieve and a 60 mesh sieve successively was finally chosen. 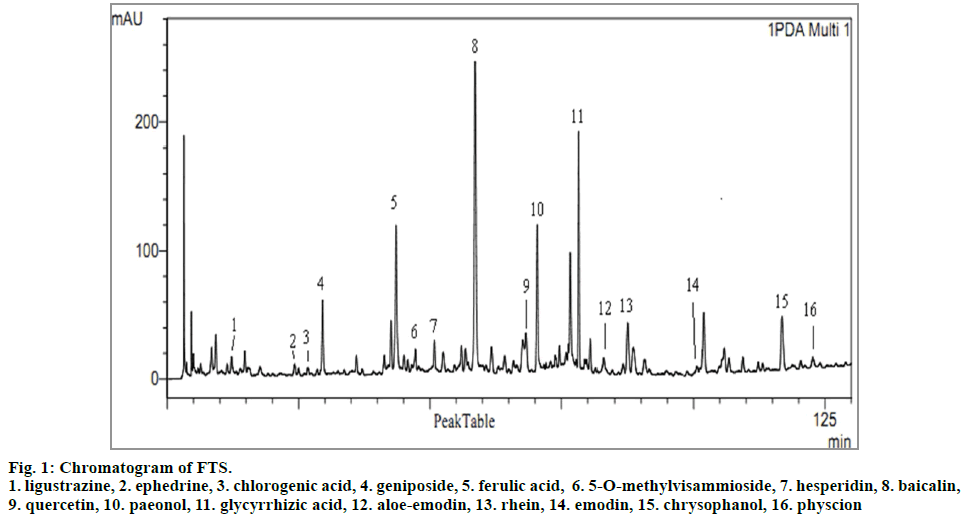 Gradient elution HPLC method was adopted due to the complexity of the prescription and the great differences of the components’ chemical properties in FTP. For optimizing the constituents of the mobile phase, acetonitrile-water, acetonitrile-aqueous phosphoric acid, acetonitrile-aqueous trifluoroacetic acid and acetonitrile-aqueous acetic acid in different mobile phase systems were adopted in order to achieve the best separation. The results showed that mobile system with acetonitrile -0.08% trifluoroacetic acid could produce a steady baseline and symmetrical peak. The gradient time and gradient slope were also adjusted. Most of the compounds were found to be separated in a single HPLC run with baseline separation under the elution program listed in Chromatographic conditions section. Five different wavelengths (210, 254, 283, 340 and 430 nm) were investigated by HPLC-PDA system to display more peaks in the fingerprint. The results suggested that the components of interest showed strong UV absorbance and the number of peaks was the most when detection wavelength was set at 254 nm. Therefore, 254 nm was chosen for obtaining the chromatographic fingerprint profile.

The linearity was analyzed by 5 serial concentrations of each selected marker standard solutions at their maximum absorption wavelength, respectively. The regression equations were established by peak areas versus concentrations. LOD and LOQ were used to reflect the sensitivity of instrument and developed method. LOD was determined by a signal-to-noise ratio of 3 and LOQ was to a signal-to-noise ratio of 10. The results were presented in Table 1.

The accuracy of the developed method was assessed by the method of standard additions. In brief, 0.5 g ground sample was spiked with a known amount of each reference compound by adding standard stock solutions. The mixture was then processed as described above (n=6). The recovery results showed in Table 2 implied that the method was accurate.

The stability of sample solutions was assessed by the RSD of peak areas of each markers standing for 48 h. The RSD values ranged from 0.16 to 1.89%, indicating that the sample solution was stable within 48 h. Despite this, quantitative analysis was conducted within 24 h after sample preparation in order to avoid any possible decomposition.

The method was validated with respect to variation of the instrument characteristics. Two different brand HPLC instruments (Shimadzu model 20A and Ultimate 3000) were used. There were no significant changes in chromatographic window. The chromtographic profile was similar and the selected markers were all displayed in chromatogram. The results showed that the method was robust.

8 batches of FTP were analyzed using the developed method. The result showed that these products possess similar chromatographic profiles (fig 2). The similarity evaluation system for chromatographic fingerprint of TCM (Version 2004 A, by National Pharmacopoeia Committee) was used in the similarity study of chromatographic and spectral profiles. The simulative mean chromatogram of FTP was generated and the correlation coefficients of chromatograms were calculated. The similarity match of chromatograms showed that the profiles of 8 batches of FTP were consistent to each other although the peak intensities were somewhat different. This might be a result of the variation in the quality of raw materials. The correlation coefficient of eight sample chromatograms to their simulative mean chromatogram ranged from 0.934 to 0.999, indicating that the quality of different bathes of FTP from the same manufacturer was stable. To further evaluate the quality, the contents of the selected markers were studied. Although sixteen components were identified by comparing the retention time and UV spectra with reference standard, only twelve were assayed and the other six components wasn’t assayed because their contents were too low or were not well separated. The results of quantitative determination were listed in Table 3. Figure 2: The fingerprint of eight batches of FTS.

B1 to B8 refer to eight different batches. arefers to not detected.

At present, the quality control of TCM patent prescriptions, the critical challenges lie in the complex chemical matrices and the variety of chemical structures. The HPLC fingerprint profiles we applied be used to comprehensively analyze the type information of TCM and content distribution of the effective and ineffective components in traditional Chinese herbal preparation, in accordance with the characteristics of the integral and fuzzy characteristics of Chinese Medicine [19]. The established method determining a complex traditional Chinese herbal preparation, FTP, by HPLC with photodiode array detection, succeeded in quantitative determination of 12 active components, and qualitative identification 4 ingredients, simultaneously. The developed method was validated according to Ch.P.2010. The results showed the method was accurate and precision and the manufacturing process and quality of FTP was stable. This ‘multicomponents’ quantification and fingerprint profile method could be used to evaluate the quality of FTP and could be done together.

As more and more technologies have been applied to the fingerprint research of TCM, An inevitable trend that it played a much more important role in many aspects, such as the quality control, the researches of efficient components, and the mechanism in TCM, and so on [20].

We would like to show appreciation to our teachers from College of Pharmacy for providing technical support and experimental equipment.