This study was conducted between January to July 2015 in Junagadh and surrounding villages to document the use of medicinal plants for veterinary practices by people living in this area. A total 121 farmers, cowshed owners or livestock owners were contacted personally in the survey with a semi-structured questionnaire. Out of 121, 82 male informants of age 40 to 70 yeras have responded well and were included in this study. Sixty-seven medicinal plants from 40 different families have been reported to be effective in 13 different animal ailments. A total of 13 medicinal plants were cited 47 times for gastrointestinal problems, which were the highest. Leaves were used prominently (27.59 %) whereas, epicarp was the least used (0.86 %). Large number of medicinal plants reported were from the Fabaceae family (15.38 %). Junagadh area is important due to a large plant biodiversity.

Ethnoveterinary practices include the use of local medicinal plants to prevent, cure or treat various ailments in animals. It can be considered as traditional knowledge, which is used for the well-being of animals [1]. Ethnoveterinary practices are known in India since the ancient Vedic period. Cattle husbandry was well developed during the Rigvedic period (1500- 1000 BC) and the cow. ‘Kamdhenu’ was adored and considered as the best wealth of mankind. Atharvaveda provided interesting information about ailments and herbal medicinal cures for diseases of humans, cows and horses [2]. Medicinal plants like Arjuna (Terminalia arjuna), Indrajava (Holarrhena antidysenterica), Kadamba (Anthocephalus cadamba), Neem (Azadirachta indica), Asana (Pterocarpum marsupium) and Ashoka (Saraca asoca) were commonly employed by Vedic Aryans to cure ailments of animals and men [3]. The oldest ancient treatise on veterinary Ayurveda is Asvayurvedasiddhanta (complete Ayurveda of horse). The text entitled Hastyayurveda (the Ayurveda of elephant) ascribed to Dhanvantari, the father of Ayurveda [4].

Gujarat state in India is a rich source of flora. As per Gujarat Biodiversity Board, 2198 angiosperm species are found in Gujarat, which is 12.56 % of total species found in India. Junagadh is located near to the Sasan Gir forest, which is the only Lion sanctuary in Asia. The average rainfall in this region is about 400 to 1000 mm. The coldest and warmest months are December and April, May, respectively [5]. Ethnoveterinary knowledge existed in Junagadh region of Gujarat state, due to various communities like Charan, Maldharies, Rabaris, Kunbies and Maher. These communities are nurturing various animals like cows, buffalos, sheep and goats in this region since long [6].

Traditional knowledge is being forgotten these days due to the advent of latest technologies, hence some researchers are attempting to document this fragile knowledge as written reports [7]. Dependence of poor people on medicinal plant-based treatments may be due to unavailability of hospitals in the nearby area as well as allopathic drugs [8]. Due to easy availability and low cost of medicinal plants, the livestock owners of the remote areas use them as a first aid for their animals [9]. Documentation of traditional ethnoveterinary knowledge is a requirement due to increasing demand for herbal drugs in the veterinary field along with some known side-effects of allopathic products. Recognization of ethnoveterinary practices in this region and their documentation is necessary for creating new herbal-based treatments. Thus, the present study was carried out to gather traditional knowledge from the animal keepers of different age and education status. This documentation may help to create awareness of the importance of veterinary therapy with medicinal plants.

A semi-structured questionnaire was prepared in the local Gujarati language, which contained more than 8 questions that included personal details along with contact numbers (if any), occupation, ailments of animals and medicinal plants used in particular ailments, type of application of plants and part of the plant. The plant species cited by the informant were determined from, flora of Gujarat [10], and other traditional books written in the Gujarati language [11,12].

Plants consumed in the ethnoveterinary practice in the Junagadh and surrounding area were investigated in this study. Total 67 plant species from 40 different families were documented for different purposes in the area (Table 1). Face-to-face interviews were conducted with the participants with a semi-structured questionnaire, which contained basic questions related to the aim of this study. Number of participants were highest in Mendarda (34.15 %) tehsil followed by Junagadh (32.93 %) and Vanthali (32.93 %) as shown in Figure 1A. All 82 participants interviewed in various tehsils were males in the age range of 40 to 70 y or more (Figure 1B). Participants in the age range of 40 to 50 y demonstrated more ethnoveterinary knowledge as compared to other groups. This shows that the knowledge of ethnoveterinary practice is in the hands of middle aged people, which might have been inherited. Participants who had education, from 5 to 9 standards were found to possess good ethnoveterinary knowledge in all three tehsils. The highest number of participants with education up to 10th standard and above were found in the Mendarda tehsil (Figure 1C). Even with a low level of primary or secondary school education, participants demonstrated good traditional knowledge, which suggested ethnoveterinary information is being inherited. 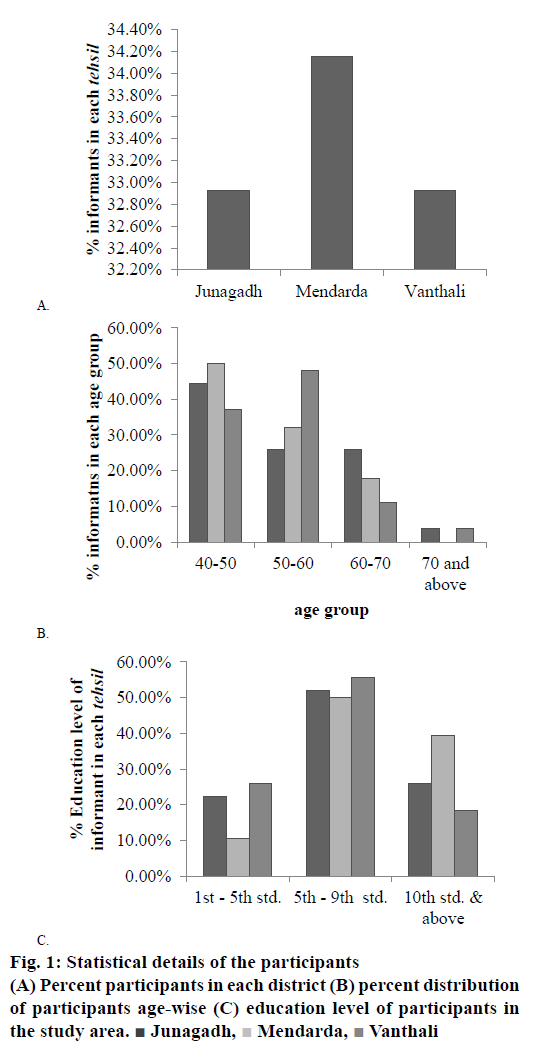 *All botanical names of medicinal plants verified on www.plantlist.org

GIT problems, wound healing, skin-related disorders, respiratory problems and inflammatory conditions were listed more compared to other diseases. Out of the 67 medicinal plants, 22.03 and 13.56 % were used for treating bloating, diarrhoea and wound healing action, whereas about 10.17 % plants were used for skin problems, respiratory problems and inflammationrelated problems (Figure 2A). Apart from these, for treating retention of the placenta, parasitic infections, bone fracture, milk let down problem, vaginal and urinary tract problems, a number of plants alone and/or in combinations were commonly used. Leaves (27.59 %) and fruits (18.97 %) were used predominantly, while epicarp, exudate and rhizomes were used sparingly (4.31 %; Figure 2B). 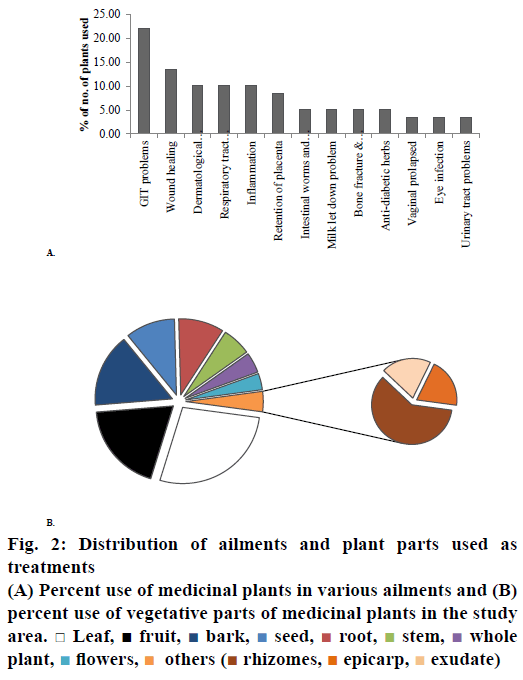 Some farmers have reported the use of fresh juice of Tridax procumbent in large ruminant injuries. This plant was reported to exhibit antiseptic and antihemorrhagic activity [13,14]. These activities of this plant might be due to the presence of steroids and triterpenes [15]. Another report from one of the farmers indicated use of fresh decoction of Prosopis juliflora leaves when an animal suffered from infectious diseases. Phytochemical analysis of P. juliflora revealed the presence of four piperidine alkaloids with good antibacterial and antifungal activities [16-18].

One of the widely distributed plants from this region is Achyranthes aspera, which has been used by livestock owners and farmers for gastric disturbance (bloat) in animals. This plant is also monographed in Ayurvedic Pharmacopoeia of India. Various pharmacological actions like wound healing [19], spermicidal activity [20] and hepatoprotective activity [21] were reported. Veterinary use of this plant however was not reported.

Butea monosperma is one of the important medicinal plants found throughout India except in arid regions. Ayurvedic Pharmacopoeia of India described the use of stem bark of this plant in chronic diseases like abdominal tumour and other intestinal conditions. But it was surprising to note the use of the plant for instant wound healing purpose, in which stem bark powder was applied to the fresh injury of animals. Though the mechanism of action is still unknown the presence of palastrin, isobutein, and other flavonoids, as well, tannins might help in wound healing through antioxidant and astringent mechanisms [22].

Use of various parts of Azadirachta indica leaves, stem bark in itching and other skin-related diseases have been documented. Triterpenes like nimbin, azadirachtin, limonoid presnet in neem could be responsible for this therapeutic activity [23].

Ricinus communis is one of the important agricultural crops in this area. Participants reported that when animals swallow the seeds of R. communis accidentally, a very painful condition resulted. To treat this condition Tamarindus indica was given alone or mixed with palatable food has been reported. T. indica is traditionally used as a laxative. Presence of tartaric acid, malic acid, and citric acid, xylose, epicatechin, and phenolics have been reported in this plant [24].

Another interesting finding was the use of Pueraria tuberosa tuber as the galactagogue in milch animals. Tubers of this plant are being used in human [15] but the veterinary use of this plant has not been studied. Some participants cited this Ayurvedic treatment, which was generally practised for the human. Under that, use of Solanum xanthocarpum for respiratory diseases, Terminalia arjuna in hyperventilated oxen, Psoralea corylifolia for the skin and related ailments were also informed [25]. All the claims cited were by participants with primary to secondary level education. This shows that Ayurveda system of medicine constituted traditional knowledge that passed from generation to generation since long.

After the thorough survey by interviews with livestock keepers, farmers and traditional healers, it was realized that important ethnoveterinary knowledge is possessed by rural people. This valuable information needs to be validated with in vitro and in vivo studies. Proper utilisation of this information might help in developing alternate therapy of ailments.

Authors thank all the farmers, owners of cowsheds and animal custodians who shared information enthusiastically.