Budesonide (BDS) is a corticosteroid used in the prophylactic management of asthma. However, frequent dosing and adverse effects (local and systemic) remain a major concern in the use of BDS [1]. A reduction in the frequency of dosing would be convenient, especially for chronic asthma. Liposomal systems for sustained pulmonary drug delivery have been particularly attractive because of their compatibility with lung surfactant components [2]. The present study aimed to evaluate the pulmonary deposition and in vivo efficacy of sustained release aerosolized budesonide liposomal systems for improved therapy of asthma.M

Liposomes were prepared by lipid film hydration method [3] and freeze dried using trehalose as cryoprotectant (Lebconco, England). The liposomes were characterized for entrapment efficiency, particle size, and surface topography by ESEM, in vitro drug release in simulated lung fluid at 370 at pH 7.4. The respirable or fine particle fraction (FPF) was determined by using twin stage impinger (TSI). The liposomes were radiolabeled with technetium (99mTc) using SnCl2 as reducing agent. Rabbit, placed in a head only exposure chamber was allowed to inhale the nebulized spray of the labeled liposomes for 10 min. Scintigraphic images of rabbit lungs were recorded by a Gamma camera (Millenium MPS System) at periodic intervals and analyzed. In vivo acute toxicity of liposomes was evaluated in mice by intratracheal administration. In vivo efficacy of BDS liposomes was evaluated by histamine induced bronchoconstriction in guinea pigs.

Liposomes were obtained as porous cake after freeze drying with narrow particle size distribution (3-7 µm). Freeze dried liposomes appeared as aggregated particles with lipids on the surface (fig. 1). Dynamic formation of liposomes was monitored by placing a drop of saline on the freeze dried liposomes; spherical structures were clearly seen and after two minutes liposomes were completely formed (figs. 2) The drug release was sustained for more than 70 h for all batches and FPF was found to be in the range of 19- 26% based on emitted dose. In the in vivo deposition studies, only about 8-10% of delivered dose was found to be deposited in lungs. The major fraction was localized in peripheral region, due to fine particle nature of the nebulized droplets. The activity was localized in the lungs for up to 12 h in comparison to 6 mins for free 99mTc, indicating prolonged retention of the BDS liposomes in lungs (fig. 3). In vivo acute toxicity study indicated the safety of budesonide loaded liposomes. In the in vivo efficacy studies, recovery time after histamine challenge significantly reduced in liposome treated guinea pigs at all time points confirming the sustained action of liposomal BDS (fig. 4). In conclusion, this investigation led to the development of stable freeze dried liposomal systems for pulmonary delivery of budesonide. With this system, it was possible to obtain localized sustained action of drugs in lungs with marked reduction in toxic effects associated with the drug. 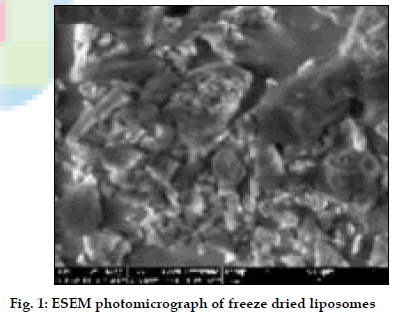 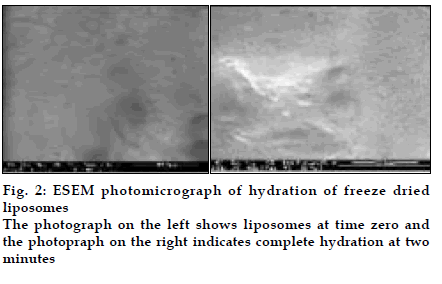 Fig. 2: ESEM photomicrograph of hydration of freeze dried liposomes The photograph on the left shows liposomes at time zero and the photopraph on the right indicates complete hydration at two minutes 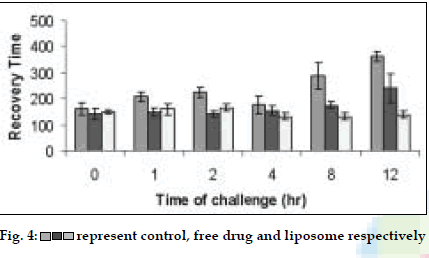 The authors wish to thank BRNS (sanction No.2004/35/5/BRNS) for financial assistance, Cipla for budesonide and Natterman GmbH for lipids.