Nicotinic acid (NA) and niacinamide are important components of the co-factors, nicotinamide adenine dinucleotide (NAD) and nicotinamide adenine dinucleotide phosphate (NADP), which widely participate in the lipid metabolism, oxidation and anaerobic decomposition of sugars in the body and also are used in a variety of therapeutic application such as treating pellagra, cardiovascular diseases and Alzheimer's disease [1,2]. A myriad of studies examined the efficacy and safety of niacin and niacinamide, but several studies reported adverse effects of niacin and niacinamide, such as diarrhoea, hyperglycaemia and hepatotoxicity [3]. Many recent studies also focused on improving the stability, absorption and potency of drug by peptidyl modification [4]. Many drugs affect the abnormal physiological metabolic process through interaction with DNA in vivo, and peptidyl derivatives of drugs normally have stronger biological activities [4,5]. NA modified by amino acids as nicotinoyl compounds have been found to be more stable with lower side effects, better bioavailability and activity [6]. Aspartic acid, a usual component of proteins, has special functions for carboxyl side chain in medicines, metalloproteins, and specific enzymes by forming common coordinating ligand or providing acidic surrounding in vivo [7]. Evaluation of the interaction of nicotinoyl peptide with calf thymus DNA (ctDNA) is likely to be helpful to understand the molecular mechanism of drugs, which could assist in drug design and prove to be of significantly important to the field of medicine, pharmacy and biology [8].

The NA derivatives were analysed and purified on an Agilent C18 column (150×4.6 mm) with 5 μm silica as a stationary phase. A gradient elution with eluent A (0.5% TFA in water) and eluent B (acetonitrile, 90:10, v/v) was used at a flow rate of 1 ml×min-1. Peaks were detected at λ=246 nm. 1H NMR and 13C NMR experiments were performed using a Bruker DPX-400 MHz instrument with TMS as the internal standard. Mass spectra were analysed on an Agilent Esquire 3000 mass spectrometer fitted with an ion spray source working in positive ion mode with methanol as a solvent. UV/Vis absorption spectra were recorded in a quartz cell on a UV-2450 spectrometer. The concentration of ctDNA solution was calculated based on the standard ε260=6600 l×mol- 1×cm-1. Then ctDNA solution was titrated with NA or NA derivatives solution using 3 ml corresponding Tris-HCl buffer solution (pH=7.4) as reference, and the UV absorption spectra of ctDNA from 200 nm to 300 nm were measured. The volumes of niacin and niacin derivatives solutions (3.75×10-2 M×l-1) were determined by Rt (Rt = c compound/cDNA). Steady-state fluorescence spectra were recorded in a quartz cell (light path=10 mm) on an F 23010 fluorescence spectrometer. Different volumes of NA and NA derivatives solutions added to a series of 10 ml colorimetric tube at fixed concentration of ctDNA (4.1×10-5 M×l-1) and EB (1.23×10-6 M×l-1), were determined by Rt (Rt = c NA/ cDNA), that were diluted to 10 ml with a Tris-HCl buffer solution (pH=7.4). After heating in a water bath for 1 h at a constant temperature (37°), its fluorescence spectra were measured in the range of 550 nm to 700 nm at an excitation wavelength of 260 nm by using a spectrofluorometer (Varian, America). The entrance and exit slits for all fluorescence measurements were both maintained at 5 nm. 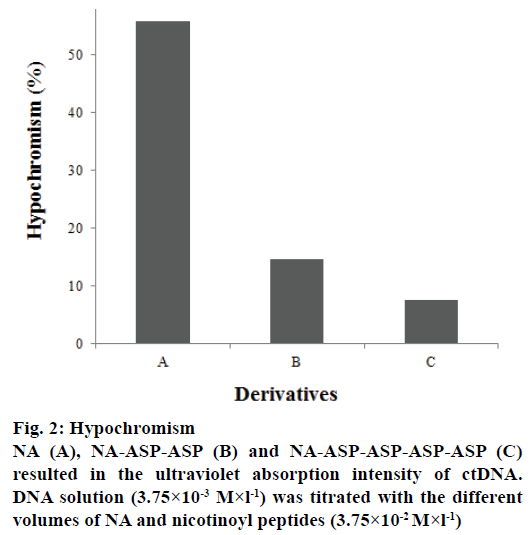 EB was a commonly used fluorescent dye for DNA binding studies because its fluorescence was extremely weak and it could specifically embed in base pairs of DNA double-helical, which caused fluorescence enhancement of the system. When another molecule intercalated with the stacked base pairs of DNA, it would compete with the action site of DNA base pairs with EB and the EB dissociated from the DNA, which finally led to the fluorescence quenching. And the fluorescence quenching extent of EB-DNA could be used to determine the binding extent between the molecule and DNA [13]. So fluorescence spectra studies were performed to investigate the interaction mode of NA or NA derivatives and DNA. The fluorescence quenching is divided into dynamic quenching and static quenching. Static quenching is caused by the non-fluorescent compound produced by the interaction between quenching agent and fluorescent substance in the ground state. Dynamic quenching refers to fluorescent substance molecules in excited state collide with quenching agent molecules, and results in fluorescence intensity quenching [14]. The experiments showed that the fluorescence of EB-DNA system at 610 nm was quenched by increasing the concentrations of NA and NA derivatives. The Stern-Volmer curves of fluorescence intensity and compound concentrations in Figure 3 are non-linear, indicating a complex quenching behaviour between compounds with ctDNA, and this quenching most likely involves both static and dynamic quenching mechanisms because the electrostatic interaction from the charged side-chains of aspartic acids disturbs the weak intercalating of NA pyridyl into ctDNA [15]. This scenario indicates that NA modified with aspartic acid is difficult to intercalate into the stacked base pairs of DNA, and the electrostatic repulsion between NA aspartic acid derivatives and ctDNA is stronger than that of NA and ctDNA. 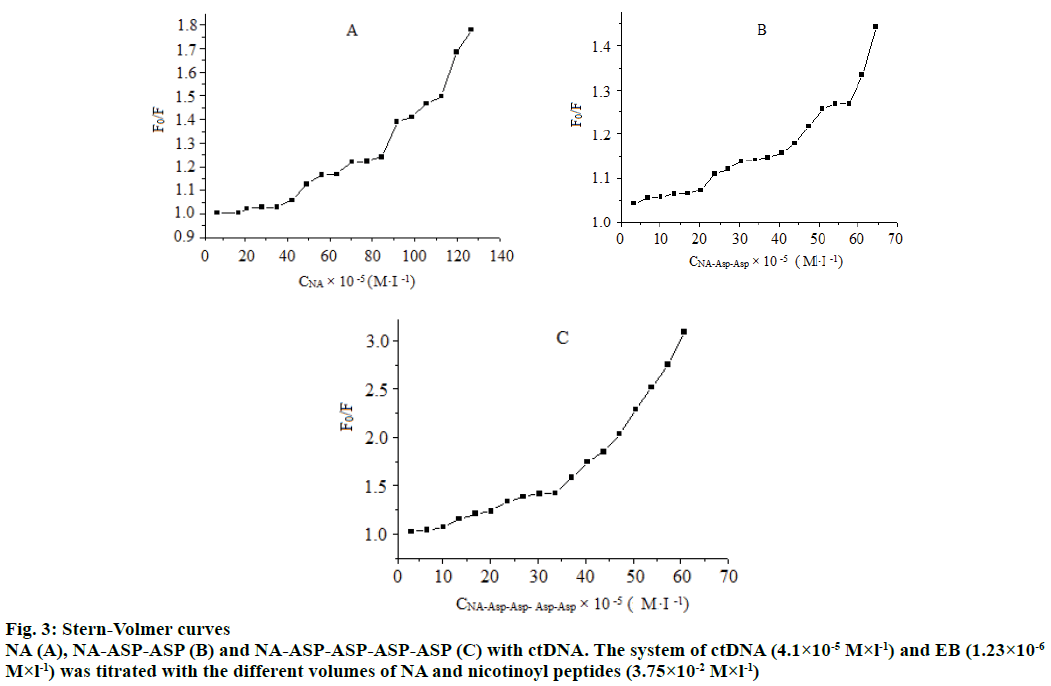