Synthesis and Antibacterial Activity of Cobalt(II) Complex of Curcumin

The plant kingdom is a rich store house of constituents that have nutritional as well as medicinal value. Development of resistance to the currently used antimicrobials and harmful side effects of existing drugs along with the increasing popularity of traditional medicine has led researchers to investigate the antimicrobial compounds in plants [1]. Medicinal plants are an important source to find new antiinfective agents [2]. Curcuma longa (turmeric) is one such medicinal plant related to Zingberiaceae family with a long history of medicinal use in South Asia, being used in the Ayurveda, the traditional Indian medicine system [3]. Turmeric is an ancient spice and a traditional remedy that has been used as a medicine, condiment and a flavoring agent. Turmeric powder, derived from the rhizome of C. longa, is commonly used as a spice, food preservative, and food-coloring agent. Among the constituents, curcumin (1E,6E)-1,7-bis} (4-hydroxy-3-methoxyphenyl)-1,6-heptadiene-3,5- dione; diferuloylmethane), a yellow bioactive pigment, is the major component of turmeric [4]. It is amongst the more successful chemopreventive compounds investigated in recent years and has shown to exhibit antioxidant, antiinflammatory, antiviral, antibacterial, antifungal, and anticancer activities. It thus, possesses potential activity against various malignant diseases, diabetes, allergies, arthritis, Alzheimer’s disease, and other chronic illnesses [5]. Several studies have reported the broad-spectrum antimicrobial activity of curcumin including antibacterial, antiviral, and antifungal activities. Curcumin exhibited significant antibacterial activity with minimum inhibitory concentration (MIC) values between 5 and 50 μg/ml against 65 clinical isolates of Helicobacter pylori [6]. Curcumin showed inhibitory activity against methicillin-resistant Staphylococcus aureus strains with MIC value of 125-250 μg/ml [7]. Curcumin was also effective against Enterococcus faecalis, Escherichia coli and Pseudomonas aeruginosa. The bactericidal activity of curcumin was found to be due to damaging the bacterial membrane [8]. Curcumin showed antiviral activity against influenza viruses PR8, H1N1 and H6N1. More than 90 % reduction in virus load in cell culture was observed in the presence of 30 μM curcumin [9]. Curcumin was found to be an inhibitor of HIV-1 and HIV-2 protease with an IC50 of 100 and 250 μM, respectively [10]. Curcumin exhibited antiviral activity against coxsackievirus by reducing viral RNA expression, protein synthesis, and virus titer [11]. Curcumin is fungicidal against Candida species with MIC values ranging from 250 to 2000 μg/ml [12]. Curcumin exerted antifungal effect against two phytophagous fungi, Fusarium solani and Helminthosporium oryzae [13]. Curcumin exerted greater effect against Paracoccidioides brasiliensis than that of fluconazole [14]. However, low solubility, poor absorption and fast metabolism leads to low bioavailability and lack of target delivery limits the usage of curcumin as a therapeutic agent [3].

The above limitations can be overcome by attaching curcumin to ligands that enhance its solubility, bioavailability and slow down the metabolism [3]. Complexation of curcumin with transition metals has attracted much interest over the past years as one of the useful requirement for increasing bioavailability of curcumin. Several metallocomplexes of curcumin have been synthesized characterized and evaluated for various biological activities. Complexes of boron, copper, iron, manganese, palladium, vanadyl, gallium, and indium have been reported [15-21]. Some metals are known for their antibacterial activity and in some cases as effective therapeutic agents against bacterial diseases [22]. Cobalt is one of the important trace elements, which is regarded as an essential element for humans and is less toxic than non-essential metals [23]. However, no study reported attempts to form cobalt complexes with curcumin. Owing to this, in the present study curcumin was complexed with cobalt and screened for antibacterial activity. Many reports on the antibacterial properties of cobalt complexes have appeared in the literature, wherein Co(II) complexes were the most studied, presumably due to their aqueous stability, availability and ease of synthesis [24]. Cobaltamino acid complexes were found to be antibacterial against E. coli, Bacillus subtilis and Micrococcus luteus. M. luteus was the most susceptible strain tested [25]. Cobalt complex with histidine showed significant antibacterial and antifungal activity against multidrug resistant pathogens such as P. aeruginosa, Vibrio cholerae, Salmonella typhi, E. coli, Klebsiella pneumoniae, S. aureus, Aspergillus niger, A. flavus and C. albicans in comparison to commercial antibiotics [26]. Thiamine-cobalt complex was active against Gramnegative bacteria, S. paratyphi B and Vibrio species [27]. Cobalt is generally not considered to be a very toxic element. Vitamin B12 is a cobaloxime, a naturally occurring cobalt complex containing a glyoxime ligand [24]. Toxicity of cobalt is reduced in the form of a complex. The toxicity of cobalt complex was determined using the brine shrimp lethality test. The LC50 value of 362.24 mg/l indicated that the complex was not toxic [28]. However, toxicity is concentrationdependent and exposure to higher concentrations might adversely affect the human health [24].

Raw turmeric was finely powdered and about 50 g of turmeric powder was refluxed with ethanol for 5 h. After refluxing, the mixture was filtered, filtrate was collected and residue discarded. Filtrate was distilled off and the residue remained in the round bottom flask was washed with petroleum ether (60-80°) to get a residue of curcuminoids, which was further purified [29].

The crude extract was subjected to column chromatography on a silica gel glass column. About 2 g of crude curcuminoids were mixed with 1 ml methanol and loaded on to the column (30×1.5 cm) and eluted with chloroform:methanol (90:10). All the collected fractions were subjected to thin-layer chromatography and yellow spots were detected. Finally curcumin was recrystallized from hot ethanol, to get orange-red crystalline compound, which was stored in a darkcolored container.

Curcumin (0.92 g, 0.1 M) solution in 25 ml methanol was prepared and heated gently at 40-50° for 15 min. A solution of cobalt(II) sulphate (CoSO4) was prepared (0.353 g, 0.05 M) in 25 ml of methanol and added to curcumin solution, stirred continuously. pH of the reaction mixture was maintained at 7.5-9.5 by adding 5 % ammonia solution. Heating was continued on a water bath at 50-60° with continuous stirring. Dark brownish-colored complex that precipitated was filtered in a Buchner funnel with suction and the compound was washed with deionized water and rinsed with methanol till unreacted reagent and curcumin was removed from the complex.

Fourier-transform infrared (FTIR) spectra of curcumin and Co(II)-curcumin complex were recorded on a FTIR (Shimadzu 2200) equipped with a deuterated triglycine sulfate detector with a resolution fixed to 4 cm-1. The pellets of sample (10 mg) and potassium bromide (200 mg) were prepared by compressing the powder at 5 bars for 5 min on a KBr press and the spectrum was scanned in the wave number range of 3600-4000 cm-1.

Differential scanning calorimetric (DSC) thermograms were obtained on a Universal V4.5A TA Instruments, using 1.0 to 1.5 mg samples packed in an aluminium crucible. Samples were heated at 10°/min from room temperature to 400°, in a dynamic nitrogen atmosphere (flow rate = 200 ml/min).

Seven bacteria, B. subtilis, E. coli, K. pneumonia, S. typhi, S. flexneri, P. vulgaris and S. aureus served as test pathogens for the antibacterial assay. The organisms used in this experiment were maintained as pure cultures on nutrient agar slants and stored in refrigerator until used. All these cultures were inoculated aseptically on to fresh and sterile nutrient agar medium slants, incubated for 24 h and used. Stock solutions of curcumin and its Co(II) complex (10 mg/1.0 ml = 10000 ppm) were prepared by dissolving in dimethyl sulphoxide (DMSO). Using this stock solution all the concentrations tried, 1000 ppm (1 mg/ml) to 6000 ppm (6 mg/ml), were prepared by diluting with distilled water. Stock solutions of curcumin and cobalt(II)-curcumin complex (Co(II)- complex) were made in DMSO to ensure complete solubilisation and then diluted in aqueous broth to obtain different concentrations [4,17,30].

Antibacterial activity assay was carried out using the cup diffusion method on nutrient agar medium. Bacterial cultures were inoculated to peptone water in different test tubes and incubated at 37° in incubator for 20 min. Sterile nutrient agar plates were prepared having 20 ml of medium in a 9 cm plate. A lawn of inoculum was made from the incubated cultures using sterilized cotton swabs and allowed as such for few minutes. Wells were made equidistantly on the medium using a 5-mm cork borer. Hundred microliters of different concentrations of curcumin and its Co(II) complex were added to different wells and 100 μl of DMSO was used as the control, which was added to a well made at the centre of the plate. All test plates were incubated at 37° for 24 h. The least concentration of each extract showing a clear zone of inhibition was taken as the MIC. Experiment was also carried out with azithromycin (15 μg/disc) that served as a reference.

Curcumin content in turmeric is very less, which is only about 1-3 %. Local variety of turmeric available in the market was used in the current experiment, which yielded 1-1.5 g/100 g of turmeric powder. Curcumin is a highly lipophilic and coexisted with oils and resins; it is very difficult to separate it from oils. However, it is soluble in polar solvents like ethanol, methanol, acetone, and acetic acid and also soluble in 0.1 N NaOH solution. It has a melting point of 173°.

In the present investigation curcumin was complexed with cobalt to obtain Co(II)-complex by reacting it with CoSO4 (figure 1). FTIR spectroscopy and DSC have been employed for the characterization of complex. The complex was dark brownish in colour and was thermally stable above >250°, soluble in DMSO and DMF, readily miscible with lipids and insoluble in water and show high melting point. 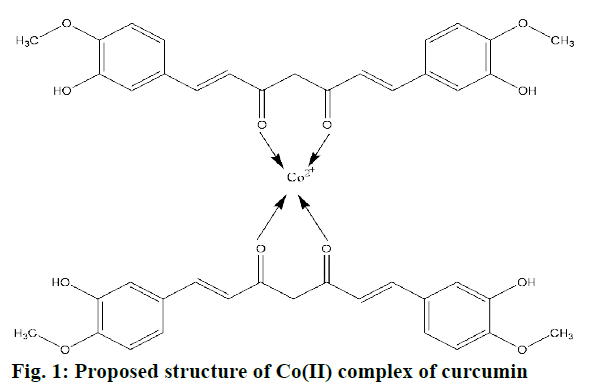 DSC thermogram showed that curcumin is thermally stable up to 100°. Above this temperature an endothermic peak at 102° was observed, which is related to the dehydroxylation of -OH groups by elimination of two water molecules. After 360° curcumin started decomposing (figure 3A). In contrast, Co(II)-complex was thermally stable up to 65°. Above this temperature two molecules of crystalline water was eliminated in one step at 86° and 102°, respectively. The existence of an anhydrous complex (Co(H2O)) could be evident from the plateau between 90 and 150°. Then, the sample shows melting endothermic peak at 283°, which can be related to the elimination of coordinated ligand. The intermediate was stable within the interval of 160-200°. After 366° a chemical decomposition of curcumin occurs without formation of thermally stable intermediates (figure 3B). Figure 3: DSC thermogram of (A) curcumin, (B) Co(II)-curcumin

The values are mean of six replicates±standard error

The values are mean of six replicates ±standard error

In conclusion, Co(II)-complex showed better antibacterial activity than curcumin and could be a suitable candidate for further in vivo investigations. This is the first report of antibacterial activity of Co(II)-complex against all the bacterial strains tested except E. coli. The fast growing research on curcumin and synthetic curcumin metal complexes confirmed the versatility and ﬂexibility of curcumin for structural modiﬁcations. However, the actual role of different functionalities in curcumin in inﬂuencing its special physicochemical properties and pleiotropic effects of natural and synthetic curcuminoids is far from understood, which warranted further investigations.

The authors are grateful to the University Grants Commission (SWRO), Bangalore, India, for financial assistance to carry out the work.