Synthesis and biological evaluation of some novel pyrazolines

Chalcones (2a and 2b) were prepared from 2-acetyl benzofuran (1) and condensed with different aromatic acid hydrazides (3a-o) to get the corresponding pyrazolines (4a-o and 5a-o). The structures of all these compounds have been established on the basis of analytical and spectral data. Compounds have been screened for antiinflammatory, antioxidant and antibacterial studies. Among the 7 compounds that were screened for antiinflammatory activity, compounds 4g and 5m showed 83.4% and 80.5% inhibition of oedema volume, while the standard drug (ibuprofen) showed inhibition of 91.9%. Compounds 4k and 5h showed moderate activity of 72.8% and 59.6% respectively. All the 30 compounds were tested for antioxidant activity at 1000, 500, 250, 100, 50, 25 and 10 mg/ml concentrations against standard drug ascorbic acid. Compounds 4g, 4h, 4k, 4m, 5g, 5h, 5k and 5m showed excellent antioxidant activity as compared with ascorbic acid. Among the 30 compounds that were screened against two Gram +ve ( Staphylococcus aureus and Bacillus subtilis ) and two gram -ve ( Escherichia coli and Pseudomonas aeruginosa ) organisms, compounds possessing p-chloro, p-fluoro, 2-amino-5-bromo, 2-hydroxy-5-nitro and 3,5-dichloro substitutions on the phenyl ring showed good activity against Escherichia coli and Bacillus subtilis . The activity is comparable with that of the standard drug ciprofloxacin.

In view of the various activities reported for compounds possessing benzofuran [1-2] and pyrazoline moiety [3-5], in the present study we attempted to synthesize benzofuran pyrazolines, as they appeared to be highly promising. Since the compounds are mainly targeted for antiinflammatory activity, an acidic group is introduced at the 5th position on the pyrazoline ring in the form of m (or) p-phenoxyacetic acid. Benzofuran chalcones (2a and 2b) were synthesized by reacting 2-acetyl benzofuran (1) with m (or) p-formyl phenoxyacetic acid in the presence of aqueous sodium hydroxide (10%). The chalcones on refluxing with substituted acid hydrazides (3a-o) in the presence of glacial acetic acid at above 130o for a period of 10 h afforded different pyrazolines (4a-o and 5a-o) and were recrystallized from boiling aqueous ethanol. The structure of chalcones and pyrazolines were confirmed by mp, tlc and spectral data. 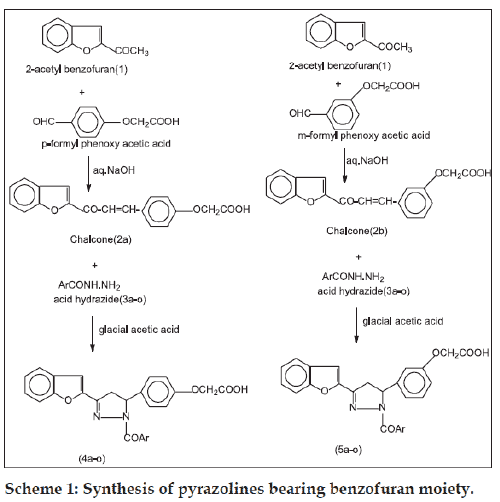 All the synthesized compounds were recrystallized in aqueous ethanol and *Solvent system used was acetone: methanol (1:1)

All the compounds were screened for antioxidant activity using DPPH method [7]. Stock solutions of synthetic compounds have been diluted in 95% ethanol to obtain 1000, 500, 250, 100, 50, 25 and 10 mg concentrations. DPPH solution (2 mmol) was prepared in 95% ethanol. To 0.5 ml of drug solution, 0.5 ml of DPPH solution (freshly prepared) was added, mixed and the reaction was allowed for 20 min. UV absorbance was measured at 517 nm. Ascorbic acid was used as a standard drug. Percentage scavenging for each drug was calculated using the formula, (control absorbance-test absorbance/ control absorbance)×100. The results were presented graphically in fig. 1. 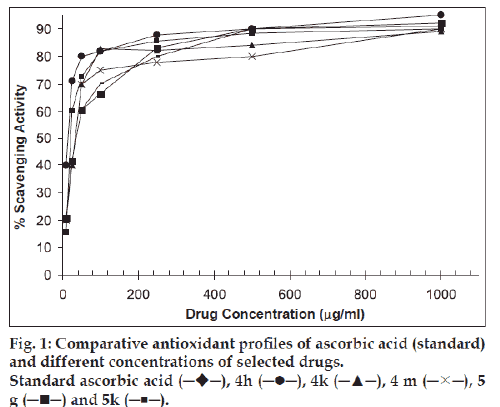 Compounds with high antioxidant activity (7 compounds) were selected and screened for antiinflammatory activity using carrageenan-induced paw oedema method [8]. Ibuprofen was used as a standard drug and the results are shown in Table 2.

5% Allowance value is 0.239 (Scheffe’s method), aP<0.05 Vs control note: Any two means showing a difference of 0.239 are statistically significant.

Among the 30 compounds synthesized, compounds 4g, 4h, 4k, 4m, 5g, 5h, 5k and 5m have shown good antioxidant activity, which was comparable with that of standard drug, ascorbic acid. Among the seven compounds screened for antiinflammatory activity, compounds 4g and 5m showed 83.9% and 80.5% inhibition of oedema volume, while the standard drug (ibuprofen) showed 91.9% inhibition. Compounds 4k and 5h showed moderate activity (72.8% and 59.6%). A good correlation was observed between antioxidant activity and antiinflamatory activity among the above compounds. The results clearly indicated that benzofuran pyrazolines with m/p-phenoxyacetic acid moiety at 5th position and with suitably substituted phenyl ring at 1st position on pyrazoline ring can exhibit good antioxidant and antiinflammatory activities. Among the 30 compounds that were screened against two gram +ve (S. aureus and B. subtilis) and two gram –ve (E. coli and P. aeruginosa) organisms, compounds possessing electron releasing groups (p-chloro, p-fluoro, 2-amino-5-bromo, 2-hydroxy-5-nitro and 3,5- dichloro) on the phenyl ring showed good activity against E. coli and B. subtilis and the activity is comparable with that of the standard drug ciprofloxacin.