Synthesis and characterization of Cr(III), Mn(III), Fe(III), VO(IV), Zr(IV) and UO2 (VI) complexes of schiff base derived from isonicotinoyl hydrazone

2-hydroxy-5-chloro-3-nitroacetophenone isonicotinoyl hydrazone as a Schiff base ligand and its complexes with Cr(III), Mn(III), Fe(III), VO(IV), Zr(IV) and UO2(VI) metal ions have been synthesized. The ligands as well as their metal complexes were well characterized using various physicochemical techniques such as elemental analyses, molar conductance measurements, magnetic measurements, thermal analysis, electronic and IR spectral studies. On the basis of these studies, square pyramidal stereochemistry for Mn(III) and VO(IV) complexes while octahedral stereochemistry for all the other complexes have been suggested. The complexes were found to be stable up to 60-70° and thermal decomposition of the complexes ended with respective metal oxide as a final product. The thermal data have been analyzed for kinetic parameters using Broido and Horowitz-Metzger methods. The synthesized Schiff base ligand and its complexes were also tested for their antimicrobial activity using various microorganisms.

Ligands containing the azomethine (>C=N) group found in Schiff base are constituted by hydrazones. There has been growing interest in the study of hydrazones because of their physiological activity and applications in analytical chemistry [1]. Several coordination compounds derived from aroylhydrazone chelators possess antituberculosis, antimicrobial, corrosion inhibitors [2-4] and antineoplastic activity due to their ability to bind intracellular ion [5]. keeping the above facts in mind, we report here the synthesis and characterization of Cr(III), Mn(III), Fe(III), VO(IV), Zr(IV) and UO2(VI) complexes of Schiff base derived from the condensation of 2-hydroxy-5-chloro-3-nitroacetophenone and isonicotinoyl hydrazide.

The infrared spectra of the ligand and complexes were recorded on a Perkin Elmer 842 spectrophotometer using KBr pellets. Elemental analysis (C, H, N) was carried out by Coleman’s microanalyses from CDRI, Lucknow, India. 1H NMR spectrum of a ligand was recorded in CDCl3 and DMSO on a EM-360, 300 MHz NMR spectrometer using TMS as a internal standard. Molar conductance of the complexes was determined in dimethylsulphoxide using solution of about 10−3 mol concentration. Magnetic susceptibility values were measured at room temperature by Guoy’s method using Hg [Co(NCS)4] as a calibrant type magnetic balance. Thermogravimetric analyses were done in the range 40-700° on a Perkin-Elmer TGS-2 system in an air atmosphere with a heating rate of 10°/min. 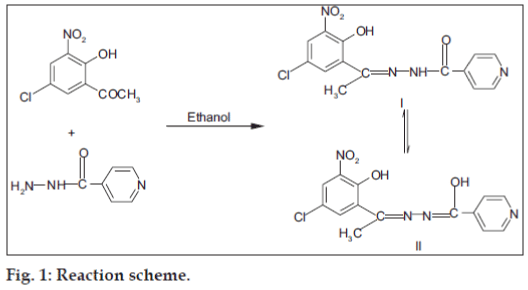 Equimolar quantities (0.02 mol) of the metal salts and the ligand were dissolved separately in absolute ethanol (25 ml) and in DMF-ethanol (1:4 v/v, 25 ml), respectively. Both the solutions were filtered and mixed in hot condition. The resulting reaction mixture was refluxed for 4-6 h in water bath. The solid product obtained on cooling was filtered, washed several time with hot water followed by ethanol and diethyl ether. Finally, all these complexes were dried at room temperature over CaCl2.

Zirconyloxychloride octahydrate (0.002 mol) is dissolved in methanol (15 ml) and to this a methanol solution of anhydrous sodium acetate (0.004 mol in 15 ml) was added and stirred for 5 min. The separated sodium chloride was filtered off. The ligand (0.002 mol) was dissolved separately in hot DMF-methanol (1:4 v/v). To these solutions, the solution containing oxozirconium(IV) diacetate was added and the mixture was refluxed for 4-6 h. The product obtained was filtered, washed 2-3 times with methanol followed by petroleum ether and dried at room temperature.

Table 1: Analytical and physical data of lh2 and its metal complexes

In order to study the bonding mode of ligand to metal in the complexes, IR spectrum of the free ligand was compared with the spectra of metal complexes. The structurally significant IR bands for free ligand and its complexes have been reported in Table 2. The band at 2991 cm-1 due to intramolecular hydrogen bonded υ(OH) group in the free ligand spectrum disappeared in spectra of all the complexes and the υ(C-O phenolic) band at 1531 cm-1, shifted to higher frequency by 4-11 cm-1, suggest the coordination of ligand through phenolic oxygen via deprotonation. The vibrational band at 1617 cm-1 assigned to υ(C=N) in the spectrum of ligand show downward shift by 36-49 cm-1 in the spectra of complexes confirming coordination through azomethine nitrogen [9]. The coordination through the azomethine nitrogen atom is further supported by the shift of υ(N-N) vibration observed at 994 cm-1 in the ligand and to higher frequency by 9-26 cm-1 in the complexes [10]. The υ(N-H) and υ(C=O) bands of the ligand at 3182 and 1685 cm-1, respectively remain almost unaffected after complexation in the Cr(III), Fe(III) and Zr(IV) complexes, suggesting the keto form of ligand [11]. It is inferred that the ligand in these metal complexes coordinates in a monobasic bidentate fashion. The spectra of the Mn(III) and VO(IV) do not show the band due to υ(N-H) and υ(C=O) frequencies indicating the coordination of ligand to metal in enol form [12]. It is supported due to presence of υ(C-O) (enolic) and υ(C=N-N=C) (azine) group frequencies in their spectra, indicating the dibasic tridentate nature of the ligand in these complexes [13]. The coordination of water in Cr(III), Mn(III) and Fe(III) is indicated by the appearance of bands at 3446-3399, 1636-1602, 852-815 and 755-746 cm-1 assignable to υ(OH), δ(H2O), ρr(H2O), and ρw(H2O) mode, respectively [14]. The absence of two bands in VO(IV) and Zr(IV) suggest the presence of water of hydration in it. The IR spectra of Mn(III) and UO2(VI) complexes displays two additional bands at 1620-1600 and 1440-1437 cm-1 are due to υasy(OCO) and υsy(OCO) frequency of acetate group, respectively. The spectra of VO(IV), Zr(IV) and UO2(VI) complexes show new bands at around 958, 1154 and 913 cm-1, respectively due to υ(U=O), υ(Zr-OH) and υasy(O=U=O) vibration. The force constant, f U-O was calculated by the method of McGlynn et al. [15]. The force constant in the UO2(VI) complexes is 6.918 mdyne/A° which is in the usual range (6.58-7.03 mdyne/A°) observed for similar UO2(VI) complexes. The U-O bond distance (R) was calculated using Jones equation [16]. R=1.08 f -1/3+1.17. The value of R is 1.736 A° which is in agreement with the reported values of 1.60-1.92 A°. Also in addition to above bands all complexes display the bands in the far-infrared region at 555-458 and 519-402 cm-1 assigned to υ(M-O) and υ(M-N) vibrations [17].

Table 2: Infrared spectral data of the ligand and its metal complexes

The electronic spectra and magnetic moments of the metal complexes are listed in Table 3. The reflectance spectrum of Cr(III) complex exhibit three transitions at 549, 416 and 258 nm due to the 4A2g(F) → 4T2g(F), 4A2g(F) → 4T1g(F) and 4A2g(F) → 4T1g (P) transitions, respectively, suggesting an octahedral geometry around the Cr(III) ion [18]. The magnetic moment value was found to be 3.99 BM, which is also agree well with the known values for Cr(III) complex in octahedral geometry. The solid reflectance spectrum of Mn(III) complex show bands at 731, 598, 512 and 394 nm, which may be assigned to 5B1 → 5B2, 5B1 → 5A1, 5B1 → 5E and LMCT transition, respectively, towards square pyramidal structure around Mn(III) ion [19]. The observed value for the Mn(III) complex is 4.82 BM. in accordance with the four unpaired electrons corresponding to square pyramidal geometry. The electronic spectrum of Fe(III) complex displays three bands at 810, 575 and 450 nm assignable to 6A1g(S) →4T1g(G), 6A1g(S) → 4T2g(G) and 6A1g(S) → 4Eg,4A1g(G)transition, respectively, indicating that the complex possesses a high spin octahedral configuration [20]. 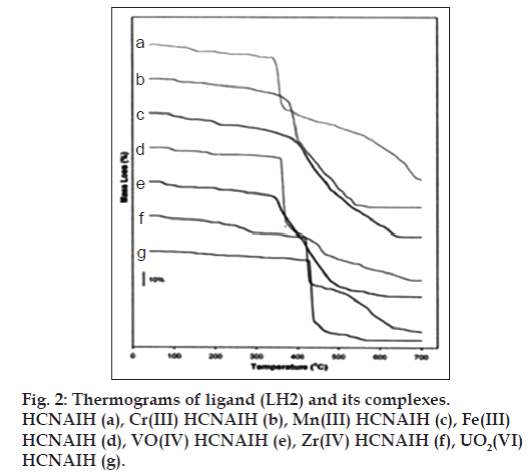 Beyond this temperature, a gradual weight loss is observed corresponding to the decomposition of remaining part of coordinated ligand. The VO(IV) complex show a gradual but continuous weight loss at about 300-620° due to thermal degradation of coordinated ligand. The final stage ends with the aerial oxidation of the complexes and formation of stable metal oxides. The half decomposition temperature, activation energy, frequency factor, apparent entropy of activation and free energy change of ligand and its complexes were calculated by employing Broido and Horowitz-Metzger method are listed in Table 4. From the half decomposition temperature, the relative thermal stability of the compounds is found to be Mn(III)>UO2(VI)>Zr(IV) >VO(IV)>Cr(III)>LH2>Fe(III).

Table 4: Thermal decomposition data of ligand (lh2) and its complexes

The Schiff base and its corresponding Cr(III), Mn(III), Fe(III), VO(IV), Zr(IV) and UO2(VI) complexes were screened for their biological activity by using seven bacteria, E. coli, S. typhi, A. aerogenes, S. aureus, B. subtilis, B. megatherium and P. vulgaris strains by the cup plate method. The microbial results are summarized in Table 5. The ligand exibit bacteriostatic behaviour towards all the bacterial strain used except, S. aureus, P. vulgaris.

Table 5: Antimicrobial activity of the ligand and its complexes

The Cr(III), Fe(III) and Zr(IV) complexes were found to show almost low to moderate bacteriocidal (sensitive) nature against all the bacterial strains. The Cr(III) complex is found to show good activity against S. aureus and the Mn(III) complex possess fairly good antibacterial activity against E. coli and S. aureus. Moderate activities of the VO(IV) and Zr(IV) complexes were found against S. typhi and S. aureus, respectively, whereas these complexes showed either bacteriostatic or weak bacteriocidal nature against all the organisms. In general, the results reveal that, the activity of the ligand was found to be enhanced on complexation with the metal ions.

From the present investigation it has been observed that there is a possibility of formation of ligand 2-hydroxy-5-chloro-3-nitroacetophenone isonicotinoyl hydrazone and its complexation with metal ions like Cr(III), Mn(III), Fe(III), VO(IV), Zr(IV) and UO2(VI). The data explain that Schiff base is a monobasic bidentate (ON) donar towards the Cr(III), Fe(III) and Zr(IV), monobasic tridentate (ONO) donor towards UO2(VI) and dibasic tridentate (ONO) donor towards Mn(III) and VO(IV) complexes. The bonding of the ligand to metal was confirmed by the analytical, IR, electronic, magnetic and thermal studies.