Today majority of drugs are delivered by oral route because it offers comfort to the patient, and low manufacturing cost. To elicit pharmacological action; the drug needs to be available in the therapeutic range at the target site and to achieve this criteria drug should be soluble in sufficient amount before absorption [1,2]. It is reported that most of the drug reaching in the market as a result of fast drug discovery and development process have poor water solubility [3], hence these drug presents poor bioavailability hence failed to achieve steady state plasma concentration [4]. Varieties of approach are used to improve the solubility/dissolution of poorly water soluble drugs. These include reduction of particle size [5], use of different polymorphs [6], formation of solid dispersion [7], complexation [8], crystal product formation [9], self-emulsifying system [10]. Along with these techniques synthesis of mesoporous materials is another promising approach that can be utilized as a carrier for dissolution enhancement [11]. This has rapidly become a highly important subject area due to large surface area (1000 m2/g), uniform pore size, large pore volume (≈1 cm3/g) biocompatibility and high stability of mesoporous silica nanoparticles [12,13]. The stability due to Si-O eliminates the use of external stabilizer which is essential in liposomes, niosomes and polymeric nanoparticles. The synthesis involves hydrolysis and condensation of silica precursor followed by template removal by calcination. Hence, it was decided to develop mesoporous silica nanoparticles for dissolution improvement of repaglinide; meglitinide analogue use in Type 2 diabetes mellitus. Repaglinide is Biopharmaceutics Classification System (BCS) class II drugs; have low solubility (34.6 μg/ml), high lipophilicity (log p 3.97) and mean absolute bioavailability is 45-65 % [14,15]. During development due consideration was given to molar concentration of cationic surfactants i.e. cetyltrimethyl ammonium bromide (CTAB) and cetylpyridinium chloride (CPCL) as it was reported that cationic surfactant forms micellar structure suitable for growth tetraethyl orthosilicate (TEOS) based silica and removal of it creates pores in the material. Increase in the concentration of CTAB reduces the particle size [16] which could have effect on surface area and hence on drug loading and dissolution.

Mesoporous silica nanoparticles were prepared by solgel method. As reported by Gonzalez; varying molar concentrations of CTAB and CPCL were used while molar ratio of ethanol, water, ammonium hydroxide and tetraethyl orthosilicate was kept constant [17]. The composition is shown in Table 1. Initially ethanol, water and ammonia solution (NH4OH) were mixed together to form silica sol. Then CTAB was added with constant stirring for 15 min. Finally TEOS was added drop by drop under continuous stirring for 2 h at room temperature. The start of the reaction was confirmed by immediate formation of opaque solution. The white powder precipitated was filtered and washed with deionised water. The particles were calcined at 550° for 3 h to remove the surfactant.

Repaglinide was loaded onto mesoporous nanoparticles by solvent immersion method. In this experiment n-hexane; a nonpolar solvent was used for drug loading because polar solvent may compete for drug molecule for adsorption site. Preliminary formulation batches of mesoporous silica nanoparticles (MSNs) were developed to decide the ratio for drug loading. For drug loading; repaglinide: blank MSNs using CTAB and CPCL in ratio 1:1 to 1:4 were prepared. On the basis of drug loading it was decided to prepare the batches in ratio of 1:2. The blank MSNs and repaglinide was dispersed in 20 ml hexane. The dispersion was stirred for 4 h, centrifuged and the supernatant was removed. Finally mesoporous silica nanoparticles were collected and dried at room temperature for 24 h [18].

The x-ray powder diffraction pattern of repaglinide; MSNs prepared by using CTAB and CPCL were recorded using on x-ray diffractometer (Bruker D8 Advance, India) using Ni-filtered, and CuKα radiation operated at voltage of 35 Kv and current of 25 mA. The scanning rate employed was 10 per minute over 50 to 500 diffraction angle (2θ) range [20].

The shape and surface morphology of the particles prepared with CTAB and CPCL was examined using a scanning electron microscope (JEOL/JEM 2100, Japan). The spheres were vacuum dried, coated with a thin gold-palladium layer with a sputter coater unit and observed microscopically at an accelerating voltage of 10 Kv.

Amount of repaglinide loaded on mesoporous particles were determined by suspending particles equivalent to 10 mg of repaglinide in 100 ml of phosphate buffer (pH 5); stirred continuously on magnetic stirring for 24 h at room temperature. After stirring; the solution was filtered through cellulose acetate membrane (0.22 μm). The amount of drug in the filtrate was analyzed using UV spectrophotometer (UV 1801, Shimadzu Co, Japan) at 240 nm [21].

The in vitro dissolution was determined using USP Type II dissolution test apparatus (TDT-08, Electrolab India). Repaglinide and its loaded silica nanoparticles (equivalent to 10 mg of repaglinide) were filled in empty capsule shells and put into the vessel containing phosphate buffer (pH 5) which was maintained at 37°±0.5°. The paddle rotation speed was kept at 75 rpm and the study was conducted for one hr. Aliquots of 10 ml were withdrawn at predetermined time intervals and fresh volume of dissolution medium was added to maintain sink condition [22]. The samples were analyzed spectrophotometrically at 240 nm. The experiments were performed in triplicate for each batch.

The drug loading particularly in case of mesoporous particles is based on adsorption. The amount of drug loaded in the MSNs prepared by using CTAB and CPCL were 90.3 % and 60.8 % respectively. The highest drug loading found in case of CTAB may be due to larger surface area and pore volume than that of CPCL. This was confirmed by N2 adsorption-desorption technique. One more reason for high loading of repaglinide was probably an interaction of drug with surface silanol i.e. –OH group particularly through functional group -O- (ether); -COOH (acid) and –NH. Probable H-bond would forms between electrons deficient hydrogen of silanol with carboxyl carboxyl oxygen, oxygen of ether is shown in fig. 1. 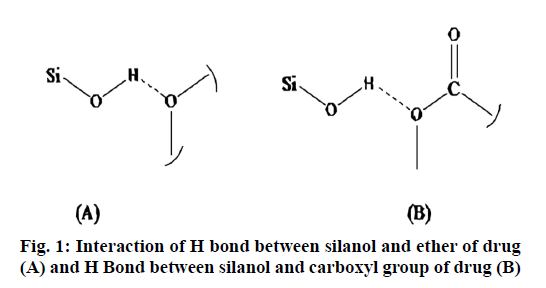 It was further evident from FTIR spectrum of drug and drug loaded porous particles that C=O stretching in pure drug and drug loaded on mesoporous silica nanoparticles differs i.e. 1712 and 1708 cm-1 respectively which may be due to weakening of double bond character of C=O functional group. Further –OH stretching in loaded porous particles would not able to resolve –H bond interaction as bands in the region 3 000 to 3 500 cm-1 are overlapped. The overall interaction of functional groups of repaglinide and surface silanol group is depicted in fig. 2. The FTIR spectrums are presented in fig. 3. Nitrogen adsorption and desorption isotherms of blank as well as repaglinide loaded particles are shown in fig. 4 and fig. 5. As per the IUPAC classification; all samples were classified as Type IV isotherm showing hysteresis loop; initial loop is of monolayer or multilayer adsorption while second loop is of desorption. CTAB and CPCL particles showed N2 isotherm wherein the amount of N2 adsorption increases above P/P0=0.2. This suggested N2 condensation within the pores and confirms the presence of mesopores. Desorption was one step indicating the open mesopores. Particles prepared using CTAB exhibited adsorption isotherm at higher relative pressure which corresponds to condensation of N2 in the interparticulate voids and confirms small size. The pore size distribution was determined by BJH model. Surface area of the mesoporous nanoparticles was observed in the range from 13.65 to 28.13 m2/g. The surface area was reduced in case of repaglinide loaded particles; this confirms the adsorption of drug on the surface. Also the pore size is increased in case of drug loaded particles. This may happens due to incorporation of drug inside the pores leads to expansion of pore size particularly in case of CTAB. But this was not observed with CPCL. The pore volume was reduced because of the space inside the pores was occupied by drug [17,22-25]. The results of surface area; pore size and pore volume are given in Table 2. The powder X-ray diffraction pattern of the repaglinide confirms that the drug is available in crystalline form. It showed characteristic diffraction peaks at 2θ angle of 7.6, 10.14, 13.25, 13.84, 16.73, 17.60, 20.37 and 23.08 (fig. 6A). However, there were no crystal diffraction patterns of repaglinide in the nanoparticles (fig. 6B). Hence; this section concludes by examining the diffractogram of nanoparticles that the drug was present in amorphous form [21]. 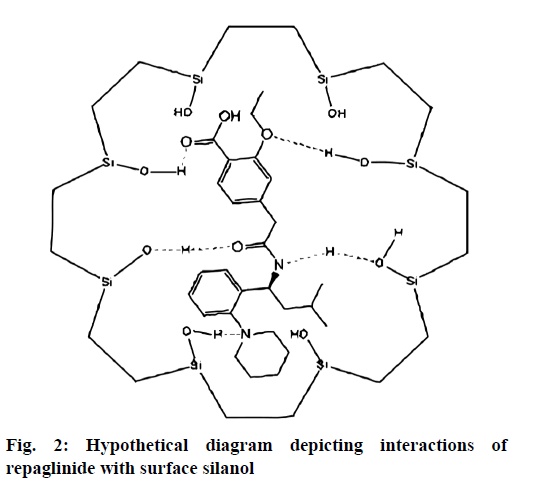 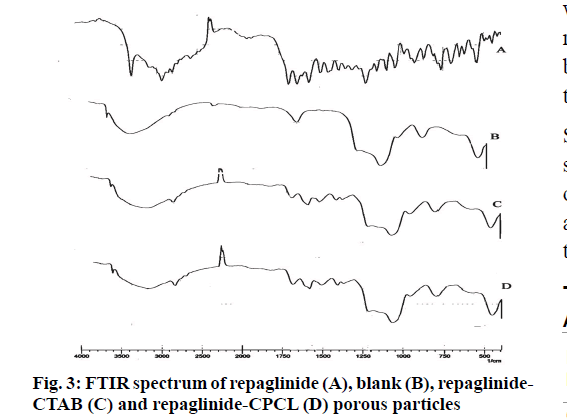 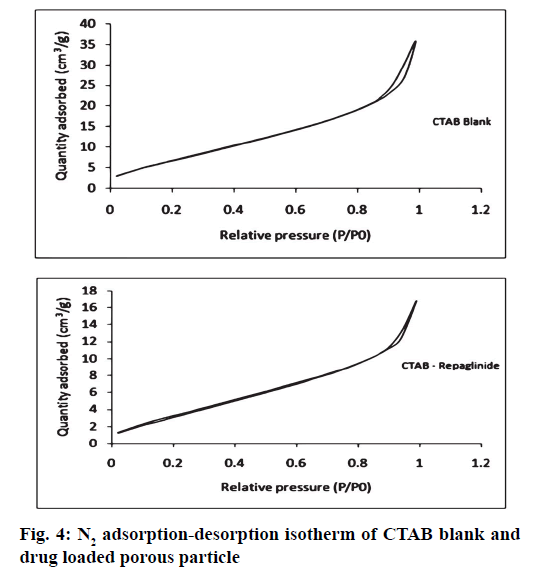 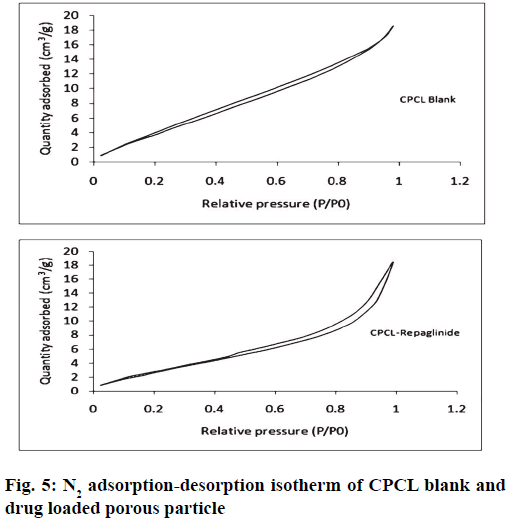 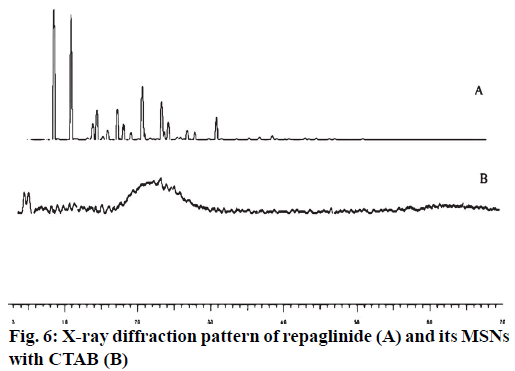 Figure 6: X-ray diffraction pattern of repaglinide (A) and its MSNs with CTAB (B)

Surface morphology of repaglinide loaded mesoporous silica nanoparticles are shown in fig. 7. It has been observed from the photomicrographs that the particles are spherical in shape with smooth surface although they have varying particle size i.e. polydispersity [26].

The particle size observed was ranged up to 617.41 nm.

The comparison of dissolution profiles of repaglinide, silica particles loaded with repaglinide and marketed formulation are shown in fig. 8. The study was conducted for 1h; repaglinide alone had shown 42.56 % release. In case of CTAB-MSN formulation; 96.5 % of drug was liberated from the formulation while conventional marketed tablet formulation had shown 79.25 % drug release. The enhancement of dissolution velocity was observed in silica nanoparticles as compare to pure drug and marketed formulation. The mechanism for improved dissolution predicted is increased surface area provided by the mesoporous silica nanoparticles; reduction of the particle size of the particles and drug and availability of drug in amorphous form [27,28]. 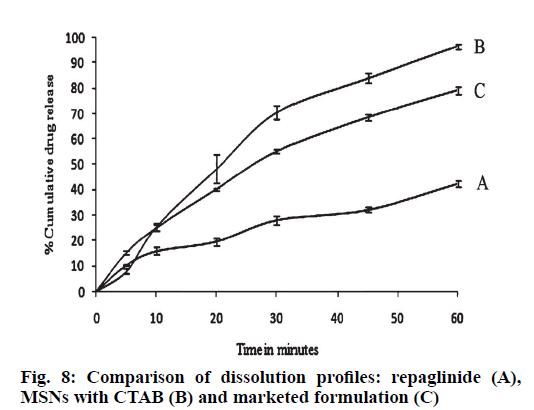 Figure 8: Comparison of dissolution profiles: repaglinide (A), MSNs with CTAB (B) and marketed formulation (C)

This research work demonstrates the synthesis of mesoporous silica nanoparticles and one of their applications in the dissolution enhancement of poorly water soluble drug; repaglinide. We had developed porous silica particles which provided larger surface area for drug and acts as a nano-container. The characterization of silica particles confirmed that the drug was found adsorbed on the surface as well as inside the pores. Dissolution of repaglinide was increased as a result of increased surface area, pores size, pore volume because of use of mesoporous silica nanoparticles as a carrier and conversion of drug from crystalline to amorphous state. This investigation will helps in designing of rapid and/or prolonged release formulation for oral administration