B. K. Satheeshababu* and I. Mohamed

Sodium alginate, a polysaccharide from natural sources available abundantly and it was used extensively in the preparation of sustained release preparations like matrix tablets [1]. Sodium alginate L-cysteine conjugate was chemically synthesised by reacting with polymer with L-cysteine and conjugation was mediated by 1-ethyl-3-(3-dimethylaminopropyl) carbodiimide hydrochloride (EDAC) and was reported as it helps in the release of drug in controlled pattern [2]. To improve the sustainability and better control over the drug release various polymers like sodium alginate and sodium conjugate were attempted [2]. When a sodium alginate is conjugated, the thiol moiety is introduced in the polymeric structure hence this leads to opening of the polymeric chains which will allow taking up more quantity of the water at a higher rate, make polymer to swell at a faster rate and allow more rapid release of drug Atorvastatin a model drug used in the present work in an inhibitor of 3-hydroxy-3-methyl-glutaryl-coenzyme A (HMGCoA) reductase which catalyzes the conversion of HMG-Co A tomevalonate, an early rate-limiting step in cholesterol biosynthesis, thereby it act as lipid-lowering agent [4].

The covalent attachment of L-cysteine to sodium alginate was achieved by the formation of amide bonds between the primary amino group of the amino acid and a carboxylic acid group of the polymer. First, 10 g of sodium alginate was hydrated in 1 liter of demineralized water. The carboxylic acid moieties of hydrated sodium alginate, were activated by the addition of 1-ethyl-3-(3-dimethylaminopropyl) carbodiimide hydrochloride (EDAC) in a final concentration of 50 mM, the reaction was allowed to proceed for 45 min. L-cysteine monohydrate hydrochloride was added to a weight ratio of 2:1 and the pH was adjusted to 4.0 with 1 M HCl. The Reaction mixtures were incubated for 2 h under stirring at room temperature. The resulting alginate cysteine conjugates were isolated by dialyzing at 10° against 1 mM HCl, followed by two times against the same medium but additionally containing 1% of NaCl and then exhaustively against 1 mM HCl (pH 4.0). Thereafter, sample was dried in dessicator under vacuum. The dried conjugated sodium alginate was powdered using glass mortar-pastel and passed through sieve number 60 and stored in desiccator until further use. The presumptive substructure and synthetic pathway of sodium alginate L-cysteine is shown in fig. 1 [5]. 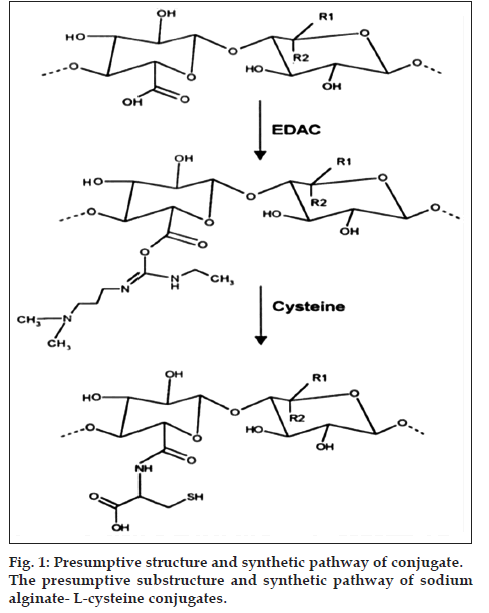 The charring point of the sodium alginate and sodium alginate L-cysteine conjugate was determined by taking approximately 5 mg of the sample in a glass capillary tube sealed at one end. The sample containing capillary was placed in melting point apparatus and the temperature was increased gradually. The temperature at which sample charred completely was noted down as the charring point of that sample in degree celsius.

The samples of sodium alginate and sodium alginate L-cysteine conjugate were prepared in the form of KBr pellets and subjected for scanning from 4000 cm-1 to 400 cm-1 using FT-IR spectrophotometer (FT-IR-8400, Shimadzu, Japan).

Approximately 2 mg of sodium alginate and sodium alginate L-cysteine conjugate sample was taken in aluminum pan, sealed with aluminum cap and kept under nitrogen purging (atmosphere). Both the samples were scanned from 0-300° with the scanning rate of 10° rise/min using differential scanning calorimeter (DSC-60, Shimadzu, Japan).

The compatibility of drug with polymers was determined by subjecting the drug, polymers and physical mixture of drug and polymers (1:1) for DSC. Approximately 2 mg of each sample was taken in aluminum pan, sealed with aluminum cap and kept under nitrogen purging (atmosphere). The samples were scanned from 0-300° with the scanning rate of 10° rise/min using differential scanning calorimeter (DSC-60, Shimadzu, Japan).

Tablets were prepared by wet granulation method. A proportion of drug, polymers and all other excipients as shown in Table 1 were passed through sieve #60 before use. A physical mixture of drug and polymers was suitably moistened with required quantity of PVP K30 in isopropyl alcohol (10% w/v) and sieved (#16) to get the wet granules. The granules were dried at 40º for 2 h, and the dried granules were resized using sieve (#22) to get the uniform sized granules. The dried granules were admixed with talc and magnesium stearate and compressed on a single station tableting machine (Cadmach machinery co. Pvt, Ltd Ahmedabad, India) using a flat faced 9.0 mm punches.

The prepared granules were subjected for pre compressional evaluation by determining the bulk density, tapped density, compressibility index, Hausner ratio and flow properties (angle of repose) by using standard procedures. All studies were carried out in triplicate (n=3) and average values are reported.

Thickness and diameter of the compressed tablet

The thickness and diameter of the tablets was determined by using dial thickness apparatus and vernier calipers respectively. Five tablets from each formulation were used and average values were noted.

Tablet hardness of all the formulations was determined by using Monsanto hardness tester. Five tablets from each formulation were used and average values were recorded.

The tablets from different batches were subjected for friability test using friabilator. Ten tablets were weighed (W0) and placed inside the Roche friabilator. The instrument was operated for 4 min at 25 rpm. The resulting tablets after 100 falls from a height of six inches were collected; weighed (Wt) and percentage loss was calculated using following equations (W2–Wt)/Wt×100.

The weight variation studies of the prepared formulations were performed as per the standard procedure following Indian pharmacopoeia [6]. The sample mean and standard deviation of each batch of tablets were reported.

One tablet from each formulations of matrix tablets, were powdered and transferred in to 100 ml volumetric flask. Initially 30 ml of methanol and 20 ml of phosphate buffer (pH 7.4) was added and allowed to rotate in a rotary shaker for 24 h. The final volume was made up with phosphate buffer (pH 7.4). The solution was filtered suitably and amount of atorvastatin calcium present in the solution was estimated by using UV spectrophotometer (UV 1601, Shimadzu, Japan) at 245 nm against a suitable blank.

One tablet from each formulation was randomly selected, weighed individually (W1) and placed separately in a wire basket which was placed in a 100 ml beaker containing phosphate buffer (pH 7.4) for 12 h and later pH 7.4 (24 h). After each hour up to 12 h, the tablets were removed from wire basket and excess water was removed using filter paper. The swollen tablets were reweighed (W2) and swelling index of each tablet was calculated using the equation percent of swelling index=(W2–W1)/W1×100.

Dissolution experiments were carried out in a USP basket type apparatus at 50 rpm at 37±0.5°. Drug release studies were conducted in 900 ml of phosphate buffer pH 7.4 up to 12 h samples of 10 ml were withdrawn at predetermined time intervals and were replaced with fresh dissolution medium to maintain sink conditions. Samples withdrawn were filtered and assayed spectrophotometrically at 245 nm. 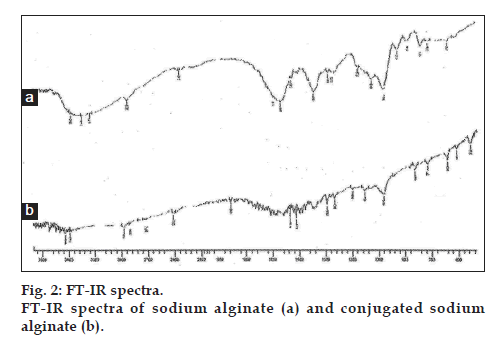 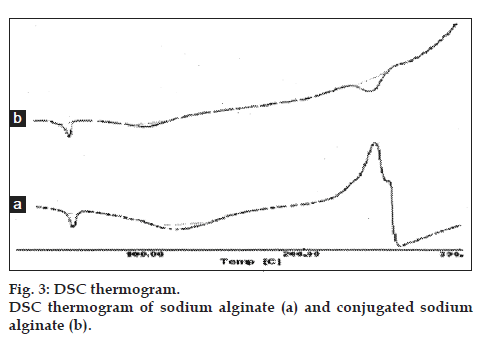 The thermogram of atorvastatin calcium showed a sharp endothermic peak at 161.09º fig. 4a has evident that purity of the compound, same peak was retained in the physical mixture of drug, sodium alginate and sodium alginate L-cysteine conjugate (fig. 4b). These observations suggested that drug and polymers are compatible. 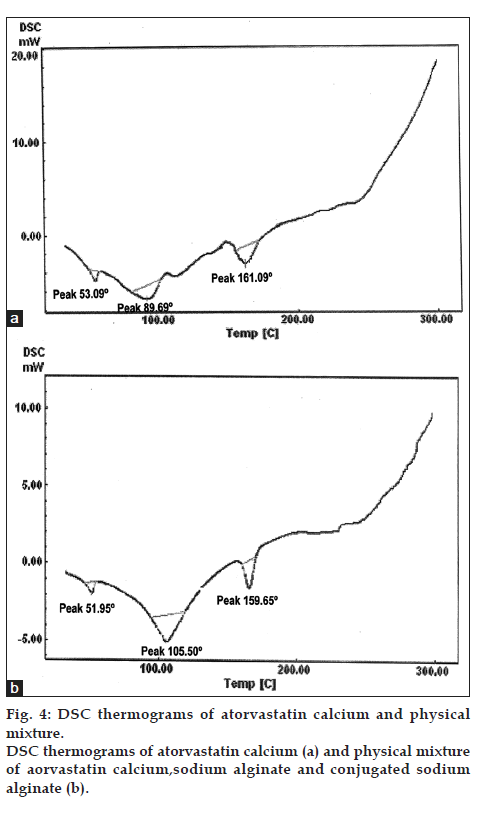 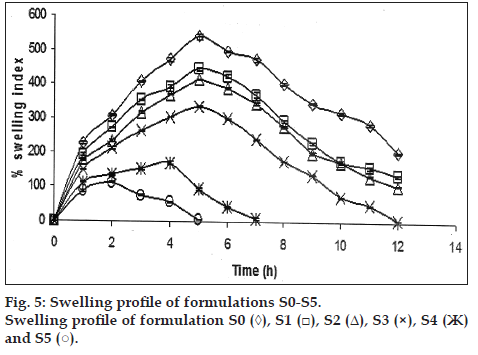 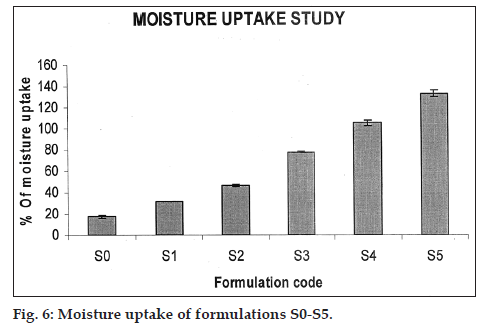 All the prepared matrix tablets were subjected for in vitro release study and it was observed that in the initial hour of the study all the tablets were shown drug release same except formulation S5 where drug release was fivefold more than the other formulations. The same trend was continued as the time of study increased and for formulations S0, S1, S2, and S3 the drug released after 8 h was 40.11±1.33, 57.16±2.52, 60.95±2.35 and 71.25±3.15 in cumulative percent, respectively, whereas for formulation S4 cumulative percent drug release was 101.5±1.77 and for S5 101.2±0.62 drug released was occurred within 5 h fig. 7. This pattern of drug release form the prepared matrix tablets attributed due to the presence of sodium alginate L-cysteine conjugate, as the proportion of sodium alginate L-cysteine conjugate increased in the formulation increases the drug release as presence of sodium alginate L-cysteine conjugate decreases the gel strength and also impart the more hydrophilicity to the matrix and act as channeling and pore forming agent thereby it allow more amount of drug permeation through the matrix. This pattern of drug release form the matrix was also supported by swelling indices values and moisture up take results. 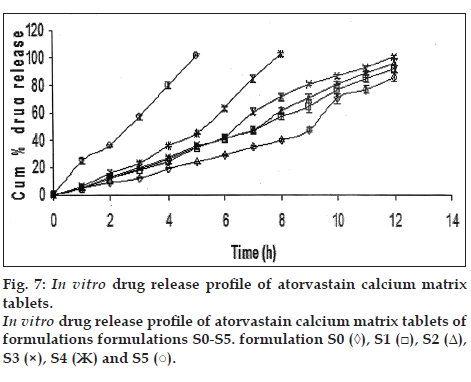 To establish the mechanism of drug release from the matrix tablets the data were treated to according to first order, zero order and Higuchi equations and it was observed that all formulations except S0 showed the linearity with respect to zero order (R2=0.9627-0.9947) as compared to first order (R2=0.8166-0.921) as shown in Table 3. Whereas formulation S0 showed linearity with respect to first order equation (R2=0.9997). Higuchi equation regression values for all formulations ranges from (R2=0.7994-0.9014). Hence to confirm precisely the domination mechanism; the data was plotted according to Koresmeyer-Peppas equation. The ‘n’ value (diffusional exponent) indicated the mechanism of drug release. For tablet systems, if n<0.45 it suggests the Fickian diffusion; if 0.46<n<0.89, it suggests the anomalous (non-Fickian) transport, for n=0.89, the zero-order release is possible and if n>0.89, a super case-?? transport is operative. In order to predict and correlate the release behavior of drugs from the tablet, it is necessary to fit them in to release kinetics profiles (Fickian, anomalous or super-case ??). This will facilitate the understanding of mode of drug release such as whether the release is because of only diffusion or only erosion or caused by both diffusion and erosion. The ‘n’ values were calculated for all formulations; ‘n’ values were found in the range of 1.408-1.9263 Table 3, indicating a super case-?? transport. These observations confirmed that both diffusion and erosion is dominant mechanism for drug release and same observations were observed during swelling study, moisture up take study and drug release study. Hence the matrix system consists of sodium alginate and sodium alginate L-cysteine is ideal system for sustaining the drug release from the matrix.