Synthesis and evaluation of flavanones as anticancer agents

A few flavanones were synthesised by cyclisation of corresponding 3-(heteroaryl)-1(2-hydroxyphenyl) prop-2-en-1-one with sodium acetate in alcohol-water and evaluated for activity. Synthesised compounds were assayed for their in vitro anticancer activity against three human cancer cell lines, mammary adenocarcinoma (MCF7), human colon adenocarcinoma (HT29) and human kidney adenocarcinoma (A498) using sulforhodamine B dye. Results indicated that most of the compounds exhibited significant in vitro anticancer potential. Among them, compound having furan ring showed most potent activity against all the tested cell lines.

Flavanones (2-phenylchroman-4-ones) are a class of natural product that show extensive biological activities with low toxicity. Compounds with promising activity can be used as leads for synthesis of novel compounds with high efficacy and low side effects to improve drug therapy. Synthetic flavanones have attracted considerable attention because of their various pharmacological properties including antifungal [1,2], antibacterial [1,3,4], analgesic [4], antioxidant [4], vasorelaxant [5], AChE inhibitory [6] and antiVSMCs vegetation [7] activity. Flavanones have been a potential source in the search for lead compounds so investigation of synthetic routes and chemical modification is a new direction in flavanone research. Flavanones have been reported as a potent anticancer agent [8-14] also, but there were very few literature that reported the bioactivity of heteroaryl derivatives, which prompted us to synthesise a novel series of flavanones to investigate the effect by changing the B ring (fig. 1) to a heterocycle ring on in vitro anticancer activity. We herein, report the synthesis and evaluation of flavanones. The first step was Claisen–Schmidt reaction between heterocyclic benzaldehyde and 2-hydroxy acetophenone to form 2-hydroxy chalcone derivatives, which on intramolecular addition reaction, gave flavanone derivatives as shown in Scheme 1. The structures of target compounds are described in Scheme 2. 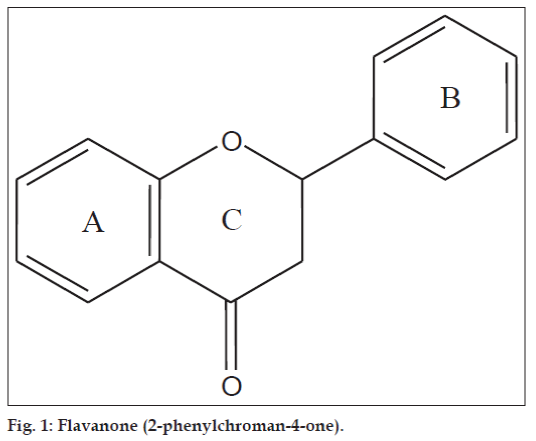 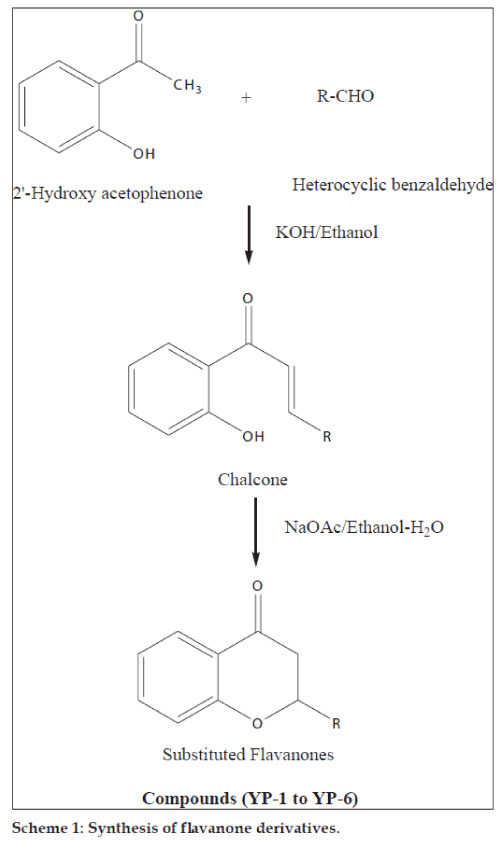 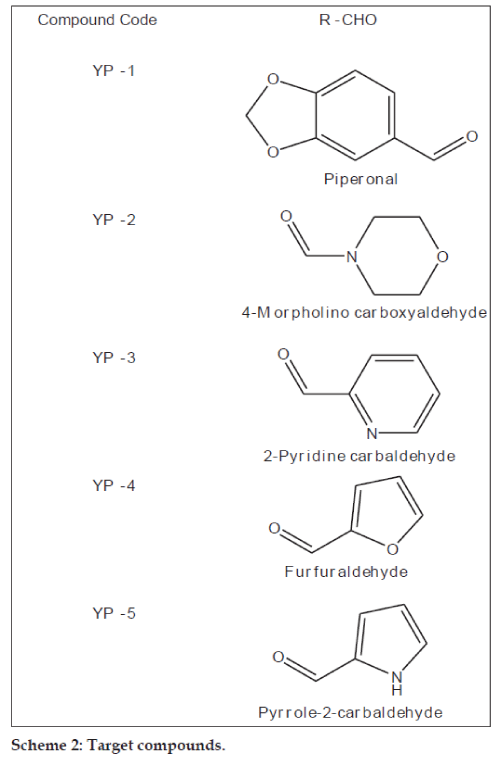 All the chemicals used for the synthesis of the compounds were obtained from Merck Ltd., Mumbai and SD Fine-Chem Ltd. Mumbai. Melting points were determined in open capillaries and are uncorrected. The compounds were analysed for elemental analysis. IR spectra were recorded on an FTIR spectrometer (Perkin Elmer) using KBr disc method. 1H NMR spectra were recorded on 1H NMR (Brucker AMx300 MHz) spectrometer in CDCl3.

General procedure for the synthesis of title compounds used was as follows: a mixture of the 2-hydroxy acetophenone (0.01 mol, 1.36 g) and corresponding heterocyclic aldehyde (0.01 mol) was taken in ethanol (30 ml) and stirred at 10-15°. To this solution, an aqueous solution of sodium hydroxide (40%, 5.0 ml) was added drop wise with continuous stirring. The mixture was kept overnight at room temperature and then it was poured into crushed ice and acidified with diluted hydrochloric acid. The chalcone precipitated as solid. The precipitated chalcone was collected and recrystallised from ethanol.

The synthesised chalcones (0.1 mmol) and sodium acetate (163 mg, 1.99 mmol) was added to a solution of ethyl alcohol (2.2 ml) and water (0.8 ml), the mixture was heated to reflux for 24 h, the solvent was evaporated under vacuum, 10 ml water was added to the residue and extracted with ethyl acetate (10 ml×3), the combined organic layer was washed with 2 N sodium hydroxide (brine), and dried over anhydrous sodium sulphate. The solvent was removed under reduced pressure and the residue was purified by silica gel column chromatography (petroleum ether:EtOAc; 4:1) to afford compounds YP-1 to YP-6. The purity of the synthesised compounds was established by TLC and melting point. The physical data of the compounds is listed in Table 1. The structures of the synthesised compounds YP-1 to YP-6 were characterised by IR and 1H NMR and the spectral data are summarised below.

*Values are mean of three experiments, standard deviation is given in parentheses