Synthesis and Formulation Development of Phenytoin by Inclusion Complexation

Epilepsy is one of the most common neurological diseases, with about 50 million patients globally[1]. Phenytoin is one of the potential candidates for epilepsy treatment, but it has low bioavailability due to lower aqueous solubility[2]. Fosphenytoin, a prodrug is widely used to overcome the low bioavailability problem of phenytoin. High cost, transient paraesthesia and pruritus are some of the disadvantages of fosphenytoin over phenytoin[3].

Phenytoin sodium is a high-yielding chemically synthesized anticonvulsant drug, which is prescribed to be taken orally (phenytoin or phenytoin sodium) or by slow intravenous injection (phenytoin sodium). It stabilizes the excitable membranes of cardiac muscle and neuronal cells by decreasing the resting fluxes of sodium and inducing chemical depolarisations[4]. It is widely used to control tonic-clonic (grand mal) seizures, partial (focal) seizures and prophylactic seizures during neurosurgery or post-traumatic injury to the head[5].

The oral dose of phenytoin sodium is 150 to 300 mg daily, which can be increased gradually to 600 mg according to the need of the patient. In status epilepsies, the maintenance dose is 100 mg/6 h. The loading dose of 10-15 mg/kg is given through slow Intravenous (IV) at the rate not exceeding 50 mg/min. In children recommended initial dose is 5 mg/kg daily and a maintenance dose is 4-8 mg/kg daily in divided doses. Phenytoin sodium can also be used as an antiarrhythmic agent[6].

Phenytoin sodium can be administered through oral, IV or Intramuscular (IM) route. IM administration shows very slow absorption and is only appropriate to control prophylactic seizures during neurosurgery. It is usually prescribed daily to prevent convulsants, which makes self-administration difficult through the IV route[7]. Therefore, chewable tablets are mostly preferred over other routes of administration.

The direct compression method is one of the most effective techniques of tablet manufacturing. Direct compression is a simple and economical method for the manufacturing of tablets. It requires fewer processing steps than other techniques such as wet granulation and roller compaction. Some pharmaceutical active ingredients cannot be compressed directly into tablets due to lack of flow, cohesion properties and lubrication. Thus, such active ingredients are blended with other excipients that can be directly compressed[8].

Synthesis of phenytoin: In the Round Bottom Flask (RBF), 4.3006 g benzoin, 12.5 ml acetic acid and 2 g sodium nitrate were taken. The 2 % copper sulfate was prepared separately and 2.5 ml was added to RBF. The mixture in RBF was stirred in circumfluence for 1.5 h. The mixture was cooled to 50-60°. Phenytoin was separated by placing the mixture in the ice water bath. Phenytoin was dried and recrystallized using methanol. Melting Point (MP) and Percentage (%) yield of phenytoin was then calculated[9].

Synthesis of phenytoin sodium: 2.1088 g phenytoin and 0.6103 g urea were added to a 50 ml flask, containing 5 ml water maintained at 98°. Then, 6 ml 30 % NaOH was added drop wise into the reactor in circumfluence for 1 h. The mixture was discolored, by adding 10 ml of water. The mixture was then filtered and the filtrate was adjusted to pH 5-6 at 45°. The precipitate was washed with water to obtain 5,5-diphenylhydantoin (diphenylhydantoin). Diphenylhydantoin was adjusted to the pH 11-11.5 by using 30 % NaOH, which was then discolored by heating at 70-80° for 0.5 h. The solution was filtered and the residue was dried to obtain the phenytoin sodium (product)[9]. MP and percentage yield of phenytoin sodium was then calculated.

Organoleptic properties: Visual colour and odour were found out.

Melting point: The MP was determined using digital melting point apparatus (model S-972). One end of the capillary tube was sealed and dried phenytoin sodium was filled by jabbing the open end of the tube. The tube was inverted and gently tapped on the benchtop to cause the solid to fall to the closed end and was filled up to 2-3 mm of height. The tube was placed into the melting point apparatus. Once the temperature of 20° below the expected melting point was reached, the temperature was further increased at the rate of not more than 1° every 30 s. The melting point range was recorded from the first visible drop of liquid to a completely melted solid[10].

Infrared Spectroscopy (IR): The IR of the synthesized drug was found out using Jasco Fourier-Transform (FT)/IR instrument (model 4100). The sample was prepared by using the KBr pellet technique. Dried KBr powder was used in a ratio of 100 times the weight of pure phenytoin sodium. The phenytoin sodium and KBr mixture were pressed in a die at 10 000 to 15 000 pounds. The disk was then held in the path of the IR beam of the instrument for spectroscopic examination. The resulting spectra showed bands at 3450 cm-1 and 1640 cm-1 due to absorbed moisture. Carbon dioxide and water absorption were removed manually[11]. The IR spectrum was compared with the reference spectrum of phenytoin published in a book by Philip et al.[12].

Elemental analysis: The sodium concentration in the synthesized drug was detected using flame photometry (model SLiSCO) at 589 nm. NaCl standard solution was used to prepare series of dilutions, having a concentration of 5, 10, 25, 50, 75, 100 mg/ml. The calibration curve was drawn. The sample solution was prepared and the emission was recorded to find out the concentration of sodium in a sample[13-16].

Ultraviolet (UV): A Jasco double beam spectrophotometer (model V-730) was used. Standard stock solution (0.1 mg/ml) of phenytoin sodium in ethanol was prepared. A dilutions series of concentration 2, 4, 6, 8, 10, 12 and 14 μg/ml was prepared using standard stock solution and ethanol. The baseline was obtained using 14 μg/ml dilution at 200-250 nm. The maximum absorbance was found out using ethanol as blank. The absorbances of serial dilutions (each analysis in triplicate) were calculated using Beer-Lambert’s law. The standard curve of concentration vs. absorbance was plotted to find linearity. The method was validated using Limit of Detection (LOD), Limit of Quantitation (LOQ), Standard Deviation (SD) and Relative standard Deviation (RSD).

Solubility is defined in quantitative terms as the concentration of the solute in a saturated solution at a certain temperature. In qualitative terms, it may be defined as the spontaneous interaction of two or more substances to form a homogeneous molecular dispersion. Drug solubility is the maximum concentration of the drug solute dissolved in the solvent under the specific condition of temperature, pH and pressure[18].

Phenytoin sodium has low solubility and high permeability. It belongs to a class II drug in Biopharmaceutics Classification System (BCS)[19]. Its solubility was enhanced by the phenomenon of inclusion complexation by using the kneading method[20,21]. The kneaded mass of β-cyclodextrin and the drug was prepared using a sufficient amount of water. The kneaded mass was dried at 45° and pulverized[22,23]. The β-cyclodextrin was used in three different concentrations to observe its effect on solubility. Table 1 represents the combination A, B and C with the corresponding proportions of phenytoin sodium and β-cyclodextrin used for kneading.

The Shake-flask method was used to determine the equilibrium solubility at a given pH and temperature. Phenytoin sodium was added in surplus to ethanol, which was then shaken at a predetermined time interval for 24 h. The undissolved material represents the saturated solution. The saturated solution was filtered and UV analysis of filtrate was performed to determine the enhanced solubility (concentration)[24,25].

The solubility enhanced drug (mixture of phenytoin sodium and β-cyclodextrin by kneading method) was used to formulate a chewable tablet. The 22 factorial design was applied for two factors i.e. silicon dioxide and starch (Table 2 and Table 3). The excipients used were silicon dioxide, starch, magnesium stearate, talc, mannitol and solubility enhanced drug along with β-cyclodextrin. One high and one low level was set up for silicon dioxide and starch. For each solubility enhanced drug (combination A, B, C) 22 factorial design was applied. Total 12 formulations were obtained (4 for each A, B and C combination), which were labelled as A1 to A4 for A, B5 to B8 for B, C9 to C12 for C[26-29]. Table 4 highlights the composition of B6 and C12 formulations.

Table 4: Compositions of Formulations B6 and C12

Five excipients were selected based on their organic properties, particle size, density, compressibility, flow ability, mode of compression and water solubility to optimize powder compatibility, blend uniformity, tablet appearance, tablet weight, tablet hardness, tablet friability and tablet disintegration[30]. As previously reported in the literature, the excipients had no drugexcipients interactions[31-33]. Drug and excipients were weighted accurately, passed through sieve no. 80 and were mixed completely for 5 min. The chewable tablets were prepared by the direct compression method. The 8 stage mini rotary tablet press was used for tablet compression. All 12 batches were performed similarly.

Bulk density (ρb)=M/Vb (where, M is the mass of the sample, Vb bulk volume)

Hardness: Hardness is a diametric tablet crushing strength. The tablet hardness was determined by the Monsanto hardness tester. The tablet was placed lengthwise between the upper and lower plunger and force was applied until the tablet fractures, to give the hardness of the tablet in kg/cm2[34].

Friability: It is a method to determine the physical strength of uncoated tablets upon exposure to mechanical shock and attrition. The weight of 15 tablets was recorded. All tablets were placed in the friability apparatus, revolving at 24-25 rpm for 4 min (100 times). After 100 revolutions the tablets were dedusted and reweighted[37]. The percentage friability is determined from the weight loss using the formula:

% Friability=Wi–Wf/Wi×100 (where, Wi is weight before a test, Wf is weight after a test)

The in vitro drug release studies (dissolution studies) were performed using USP dissolution apparatus Type II (paddle apparatus), with 900 ml of 0.05 M Tris buffer as the dissolution medium. The dissolution medium was maintained at 37°, with a paddle rotation speed of 100 rpm. Each sampling was done by withdrawing 5 ml of a sample at a 10 min time interval for about 2 h. On each withdrawal of sample, 5 ml of buffer was re-added. The collected samples were suitably diluted. The absorbance of the solutions was determined at λmax of 214 nm in a UV visible spectrophotometer, using buffer solution as a blank[36,39]. The performed dilutions were scanned at 200-400 nm. λmax for the highest concentration was found out to be 207 nm using ethanol as blank. The observed λmax matches the λmax of phenytoin sodium[6,36]. Except for peaks at 207 nm, no other peaks were seen in the UV spectrum, which represents the sample had no impurity. Table 6 represents the absorbance and validation results. Table 7 shows the summary of validation parameters for the proposed UV method. Fig. 2 represents the standard curve of phenytoin sodium in ethanol. The calibration curve and R2 show the linearity. Low % RSD values represent that the method is precise. The microgram level of LOQ and LOD indicates the method to be sensitive[41]. Therefore the proposed UV analysis method is validated. 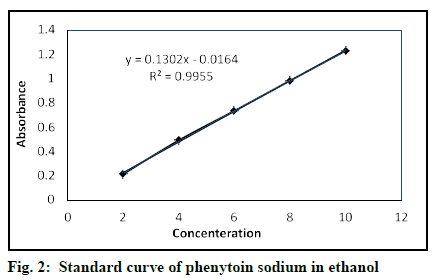 The tablets were compressed by the direct compression technique. The hardness for the conventional tab is between 4–10 kg/cm2 but for chewable tablet, the hardness should be up to 3 kg/cm2[42]. Hardness (Table 10) for all formulation except for A4, B8, C9 and C11 is less than 3 kg/cm2. 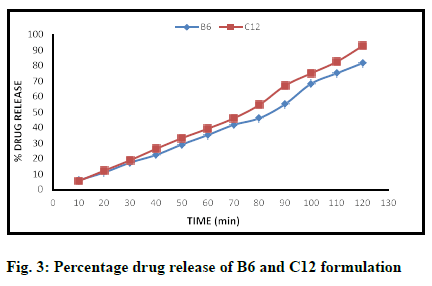 Fig. 3: Percentage drug release of B6 and C12 formulation

In conclusion, the solubility of phenytoin sodium was enhanced and an optimized chewable tablet formulation was developed.

The authors thank Dr. A. S. Dhake, Dr. A. R. Surana and Mr. P.R. Dighe for their necessary guidance for the present research work.