Synthesis and In Vitro Antioxidant Activity of New 3-Substituted-2-?Oxindole Derivatives

A series of new 1,3-dihydro-3-hydroxy-3-(2-phenyl-2-oxoethyl)-2H-indol-2-ones (1a-g) and 1,3-dihydro-3-(2-phenyl-2-oxoethylidene)-2H-indol-2-ones (2a-g) were synthesised by Knoevenagel condensation of substituted indole-2,3-diones (isatins) with various acetophenones. The synthesised compounds were characterised by their physical data, elemental, IR, 1H NMR, 13C NMR and mass spectral analyses and their in vitro antioxidant activity was determined by 2,2-diphenyl-1-picrylhydrazyl free radical scavenging assay. These compounds showed moderate to good antioxidant activities as compared with the standard, ascorbic acid. The antioxidant potential of 3-hydroxy-3-substituted oxindoles (1a-g) increased in a concentration-dependent manner from 10 to 500 μg/ml with 5-fluoro and 5-methyl analogues showing maximum activity. Of 3-aroyl methylene indol-2-ones (2a-g), majority of compounds with halogen substitution at position 5 of isatin ring exhibited good antioxidant activity within a concentration range of 5-100 μg/ml and the maximum activity was observed at 20 and 25 μg/ml concentrations. Thus, our study provides evidence that some newly synthesised isatin derivatives exhibit substantial antioxidant activity at low concentrations.

Antioxidant compounds play a pivotal role as a health protecting factor. Scientific evidence suggests that antioxidants reduce the risk of chronic diseases including cancer and heart disease [1]. Antioxidants derived from plants include vitamin C, vitamin E, carotenes, phytates and phytoestrogens [2]. However, due to the complexity of the composition of foods, separating the active component individually from food is costly and inefficient because of the possible synergistic interactions between the antioxidant compounds in the food mixture [3]. Thus, the development of new synthetic potent antioxidant compounds is of paramount significance for quick quantification of antioxidant effectiveness in preventing diseases.

The indole core is the building block for numerous alkaloids such as psilobin, harmine, strychnine, vinca, ibogo, aspidosperma which are used as drugs [4]. Plant hormone, indole 3-acetic acid and the animal hormone melatonin, a potent antioxidant, are the most important indole derivatives [5]. 3-Hydroxyoxindoles, the natural antioxidants, which are the metabolites of indole 3-acetic acid, are isolated from rice bran, grasses and other plants [6]. Some of 3-hydroxyoxindoles found in marine fish and shellfish are reported to exhibit radical scavenging activity comparable to known powerful antioxidants like uric acid and indoles in humans [7].

Chalcones, a class of compounds present in dietary flavonoids, have been shown to possess antioxidant, oxygen scavenging and antiinflammatory properties in a variety of experimental models and can trigger the intracellular cascade of protective pathways offering a promising strategy for their therapeutic applications [8]. Although studies on the bioavailability of chalcones from food sources are limited [3], a number of synthetic chalcones are known to exhibit a wide range of biological properties including cytotoxicity and cancer chemopreventive activity [9,10]. Recent emergence of 3-methylene-2-oxindoles as a new class of antineoplastic agents has aroused considerable interest in designing 2-oxindoles as drugs in medicinal chemistry [11,12].

In design of new drugs, the development of hybrid molecules through the combination of different pharmacophores in one frame may lead to compounds with interesting pharmacological properties. Keeping in view the wide spectrum of biological activities associated with 2-oxindole derivatives [13] and the chalcones, the combination of these two moieties in the same molecule is an interesting challenge for the development of new pharmacologically active antioxidants. Since isatins and related compounds, cyclic amide (lactam), have very close structural similarity with vitamin C which is a cyclic ester (lactone), it would be interesting to study the antioxidant properties of its chalcone derivatives. In this paper, we report for the first time In vitro antioxidant activity of a new series of compounds synthesised by Knoevenagel reaction of substituted isatins with various acetophenones [14] using 2,2-diphenyl-1-picrylhydrazyl (DPPH) assay.

All chemicals and solvents used in this study were of analytical grade. All isatins were purchased from Sigma Chemicals, MO, USA. Other chemicals used were obtained from Himedia Chemicals, Mumbai, India. Scheme 1 illustrates the preparation of new 3-substituted-2-oxindole derivatives. Characterization of the synthesised compounds was done on the basis of their elemental studies, IR, 1H NMR, 13C NMR and mass spectral analysis. The progress of the reaction was monitored by thin layer chromatography (TLC) by using Merck silica gel coated alumina plates and UV chamber. Melting points of newly synthesised compounds were determined by using open capillary tubes in scientific melting point apparatus and are uncorrected. All spectral studies were conducted at Central Drug Research Institute, Lucknow. IR spectra were obtained on a Perkin-Elmer model 557 grating infrared spectrophotometer using KBr pellet. NMR and mass spectra of the synthesised compounds were recorded on Bruker Avance 400 spectrophotometer and Jeol SX-102 mass spectrometer, respectively. 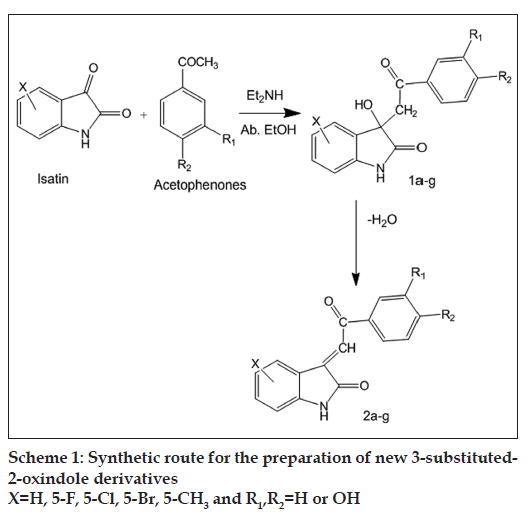 Table 1: Characterization Data of The Synthesized Compounds (1a-g And 2a-g)

In vitro antioxidant activity of the synthesised compounds was quantitatively measured by DPPH radical scavenging assay [15]. DPPH is a stable free radical at room temperature and accepts an electron or hydrogen radical to become stable diamagnetic molecule. DPPH radical is scavenged by antioxidants through the donation of proton forming the reduced DPPH. Solutions of synthesised 3-substituted oxindoles were prepared in absolute ethanol at concentrations ranging from 10 to 500 μg/ml. A DPPH blank was prepared without compound, and ethanol was used for the baseline correction. The well-known antioxidant, ascorbic acid was used for comparison or as a positive control. DPPH solution was freshly prepared daily and was kept in dark at 4° between the measurements. Briefly, 2 ml of each compound solution having different concentrations (10-500 μg/ml) were taken in different test tubes and 2 ml of 0.1 mM ethanol solution of DPPH was added and shaken vigorously. The tubes were then incubated at 37° for 30 min. Changes in absorbance were measured at 517 nm using a UV/Vis spectrophotometer and the remaining DPPH was calculated. Measurement was performed in triplicate. The radical scavenging activity was expressed as percentage inhibition of DPPH and was calculated using the equation: Radical scavenging activity (%) [(A0 - A1)/A0] ×100. Where, A0 is the absorbance of the control (blank, without compound) and A1 is the absorbance of the compound. The radical scavenging activity of ascorbic acid at various concentrations was also measured and compared with those of the newly synthesised compounds.

Radical scavenging activities are of great significance due to the deleterious role of free radicals in biological systems. The In vitro antioxidant properties of the newly synthesised compounds at different concentrations were examined by a well-documented assay like DPPH free radical scavenging assay. The effect of antioxidants on DPPH radicals is considered due to their hydrogen donating ability [16]. Antioxidant molecule can quench DPPH free radicals and convert them to a colourless/bleached product ultimately resulting in a decrease in the absorbance. The In vitro antioxidant activity of the synthesised compounds Ia-g and compounds 2a-g compared to ascorbic acid as standard are shown in figs. 1 and 2, respectively. Our results indicate that newly synthesised compounds showed moderate to good antioxidant activity at low concentrations as compared to ascorbic acid. 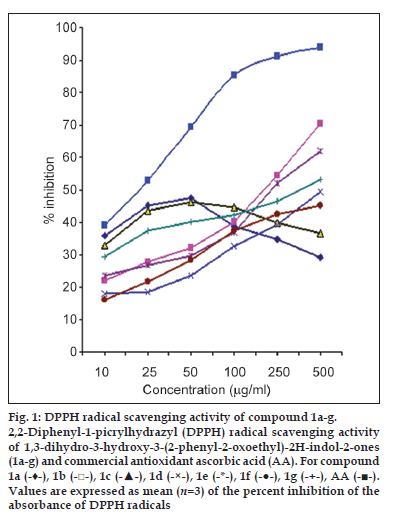 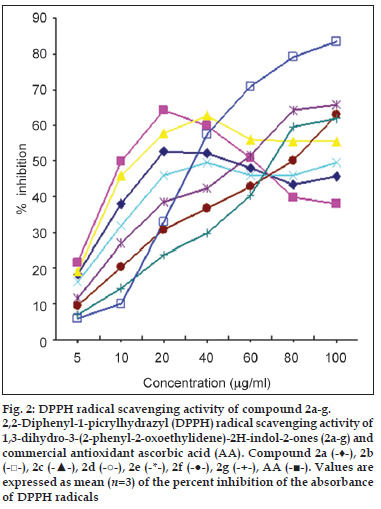 In an attempt to establish some structure activity relationship based on the position and presence of different substituents and to understand as to how different functionalities have an effect on the antioxidant properties, a series of new 1,3-dihydro- 3-hydroxy-3-(2-phenyl-2-oxoethyl)-2H-indol-2-ones (1a-g) and 1,3-dihydro-3-(2-phenyl-2-oxoethyli dene)-2H-indol-2-ones (2a-g) were synthesised. These compounds were characterised by various physicochemical and spectroscopic techniques. As per chemical structural features, two different types of compounds were synthesised under the study area. It was observed that small structural modification of the molecule can greatly alter its biological activity. Based on the structure activity relationships, it is indicated that the presence of substitution on the isatin ring and on the side chain phenyl ring influences the antioxidant potency of the molecule.

The DPPH radical scavenging efficacy of 3-hydroxy-3-substituted oxindoles (1a-g), synthetic precursors of isatin chalcone; did not show a regular trend. The scavenging of DPPH radicals by most of these compounds occurred in a concentration-dependent manner from 10 to 500 μg/ml with 5-fluoro and 5-methyl analogues showing maximum effect of 70 and 62%, respectively. Whereas for its unsubstituted counterpart (1a) and 5-chloro analogue (1c), the maximum free radical scavenging activity was 46 and 44%, at a concentration of 50 μg/ml, respectively.

Our findings indicate that heterocyclic systems with oxindole nucleus possess moderate to good antioxidant activity at low concentrations. It may be due to keto lactam ring being responsible to initiate the free radical scavenging activity due to its N-H and C=O moieties. The strategies to design and develop new isatin derivatives and other related compounds and their in vivo screening would be the purpose of further investigations.

Financial assistance to the work by DST, Delhi under Women Scientist Scheme (WOS-A) is gratefully acknowledged by the corresponding author. The authors express their gratitude to the Director, Indian Veterinary Research Institute, Izatnagar for providing necessary facilities for the study.