Synthesis and in vitro antitubercular activity of 7-substituted fluoroquinolones

Three novel fluoroquinolones with general structure 1-t-butyl-7-[4-substituted (piperazin-1-yl/piperidin-1-yl)]-6-fluoro-4-oxo-1,4-dihydro-quinoline-3-carboxylic acids were synthesized and evaluated for antitubercular activity in vitro against M. tuberculosis H37Rv in Middlebrook 7H9 broth using sparfloxacin, ciprofloxacin and isoniazid as standards. Test compounds were found to be less potent than sparfloxacin; however, one of the compounds was more potent than ciprofloxacin.

Tuberculosis (TB) is a chronic respiratory disease resulting in 2-3 million deaths every year around the world [1]. The currently available medications show serious side effects like hepatotoxicity (isoniazid), damage to auditory nerve (streptomycin), thrombocytopenic purpura (rifampicin) [2]. The emergence of multidrug resistant TB has further complicated the therapy [3]. Fluoroquinolones, which have broad spectrum antibacterial activity coupled with better pharmacokinetic properties, have been found to have good antimycobacterial activity. E.g.: -sparfloxacin,levofloxacin and moxifloxacin [4,5]. Substituted piperazines and pyrrolidines at C-7 of fluoroquinolone nucleus are known to influence the spectrum of antibacterial activity [6,7]. Hence it is proposed to retain the basic structural features of quinolones essential for exhibiting antibacterial activity and modify the substituents at C-7 position. The present work involves introduction of novel substituents on the piperazine ring present at the 7 position to study their contribution to activity. We also wanted to explore the contribution of substituted piperidine at the 7 position on the fluoroquinolone nucleus.

Title compounds I, II and III were synthesized from 1-tbutyl-butyl-7-chloro-6-fluoro-4-oxo-1,4-dihydro-quinoline-3-carboxylic acid (1) (Scheme 1). Compound (1) was synthesized as per literature procedure [8]. Condensation of equimolar quantities (0.0026 mol) of (1) with 3-(1-piperazinyl) benzisothiazole (2) / 4-(2,4-difluorobenzoyl) piperidine (3) in presence of anhydrous potassium carbonate in 15 ml of N, N-dimethylformamide (DMF) at 120º for 1.5 h followed by removal of DMF, washing with water and recrystallization from ethanol/DMF gave compounds I and II, respectively. 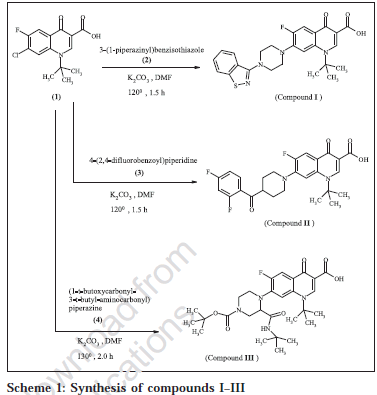 Similarly condensation of equimolar amounts (0.0026 mol) of (1) and (1-t-butoxycarbonyl- 3-t-butyl amino carbonyl) piperazine (4), in presence of anhydrous potassium carbonate in 15ml of DMF at 130° for 2.0 h followed by removal of DMF, washing with water and recrystallization from ethanol-DMF (80:20) gave compound III.

All the reactions were monitored by thin layer chromatography. Melting points were taken on Thermonik melting point apparatus. Infrared spectra were recorded on Jasco FT-IR instrument and H1-NMR spectra were recorded on Varian NMR spectrophotometer (300 MHz). Melting points, % yield and spectral data are given in Table 1. Compound (2) was synthesized according to literature method [9] and compounds (3) and (4) were obtained as gift samples from Synorg Chemicals, Ahmedabad.

Test compounds I-III were evaluated in vitro against M.tuberculosis H37Rv using tube dilution method with Middlebrook 7H9 broth as the nutrient medium containing ADC growth supplement [10-12]. Test compounds were dissolved in minimum amount of DMSO and then diluted with 7H9 broth to get different concentrations (0.5, 1, 2, 4, 8, 16, 32, 64, and 132 μg/ml). To each of the tubes, 0.01 ml of freshly prepared inoculum of M. tuberculosis H37Rv (matched to 0.5 Mcfarland standard) was added. Dilutions of reference standards sparfloxacin, ciprofloxacin and vehicle control were treated similarly. The whole set was incubated at 37º and the appearance of growth if any was observed from day 14 to 21 and from this minimum inhibitory concentrations (MICs) were noted (Table 2). All experiments were performed in duplicate.

Authors are thankful to Amrut Mody Research Foundation, Bombay College of Pharmacy for funding the project.