In continuation of our earlier work[14,15] on 2-methyl quiuazolin-4(3H)-ones we attempted to synthesize the new series of Schiff bases of 4-(2-aminophenyl)- morpholines and its characterization by IR, NMR and mass spectral analysis. The synthesized compounds were screened for analgesic activity by chemical writhing and Eddy’s hot plate method, antiinflammatory activity by paw edema method, anti-bacterial and anti-fungal activities. The minimum inhibitory concentrations of the compounds were also ascertained by agar dilution method.

Morpholine and 1-chloro-2-nitrobenzene was refluxed to yield 4-(2-nitrophenyl) morpholine, which was then reduced using zinc and hydrochloric acid affords 4-(2-aminophenyl) morpholine[16]. An equimolor mixture of 1.78 g (0.01 mol) of 4-(2-aminopheny1) morpholine and substituted aldehydes (aromatic/ heterocyclic) in absolute ethanol was refluxed using dean stark apparatus for 2 h (Scheme 1). The reaction mixture was cooled for a while and solid separated was filtered and recrystallised from ethanol (99%) yield the title compounds (1-5). The structural assignment of the products was based on their IR, 1H-NMR, 13C-NMR and mass spectral data. 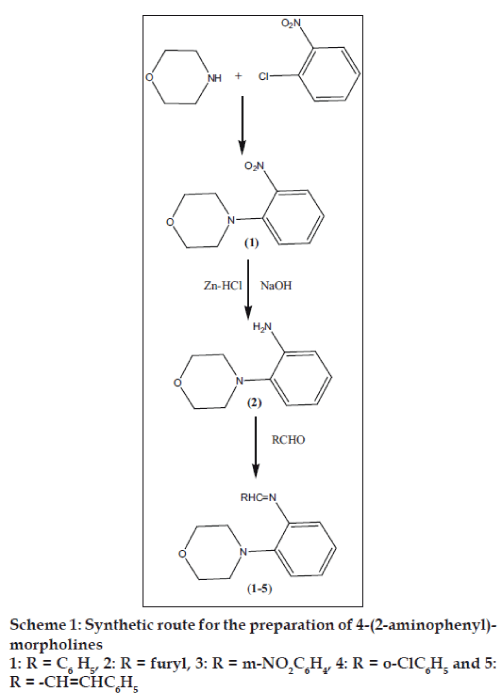 Melting points were determined in open capillary tubes and are uncorrected. IR spectra were recorded (in KBr) on an ABB Bomen MB-104. NMR spectra were recorded on 300 MHz-Bruker DPX200 using tetramethylsilane as internal standard. Mass spectra were recorded on a Shimadzu GC-MS QP5000. The purity of the synthesized compounds were checked by TLC using E-Merck TLC aluminum sheets silica gel 60F 254 (0.2 mm) using ethyl acetate:hexane (2:3) as eluent and visualized in an iodine chamber. All the chemicals used were of analytical grade. Unpaired student-t-test[17] was performed to ascertain the significance of the exhibited analgesic and antiinflammatory activities.

Swiss mice (15-25 g) and Wistar rats (150-200 g) were used for these studies[18]. They were kept in colony cages at 25±20, relative humidity of 45-55% under 12 h light and dark cycles. All the animals were acclimatized for a week before use. The animals were fed with standard animal feed and water ad libitum. The test compounds were administered orally using intragastric tube in the form of suspension using 5% Tween 80 as suspending agent. The experimental does was selected between the minimum effective dose and maximal non-lethal dose. All the animal experimentations were performed according to the protocols and recommendations of the Institutional Animal Ethics Committee. Unpaired student t-test was performed to ascertain the significance of the exhibited analgesic and antiinflammatory activities.

The analgesic activity[19] was determined by acetic acid-induced writhing method using Swiss mice (n=6) of either sex selected by random sampling technique was used for the study. Aspirin at a dose level of 100 mg/kg was administered as a standard drug for comparison. Test compounds at two dose levels (100 and 200 mg/kg) were administered orally 30 min prior to administration of the writhing agent (0.6% v/v aqueous acetic acid, 10 ml/kg). The writhing produced in the animal was observed for 30 min and percentage protection was calculated for analgesic activity. The results are presented in Table 1.

The analgesic activity was also determined by Eddy’s hot plate method[20], using Swiss mice (n=6) of either sex selected by random sampling technique was used for the study. Pentazocine at the dose of 10 mg/kg (p.o.) was administered as standard drug for comparison. The test compounds at 2 dose levels (100 and 200 mg/kg) were administered orally. The temperature of the Eddy’s hot plate was maintained at 55±0.50. The animals for the experiment were chosen when the animal reaction (licking of the fore paws or jumping response) was within 10 s. After drug treatment every 30, 60, 90 and 120 min the reaction time was noted. The cutoff point of 30 s was observed to prevent the paw damage and data are presented in Table 2.

Antiinflammatory activity[21] was determined by carrageenan-induced paw edema method in Wistar rats (n=6) of either sex selected by random sampling technique. Indomethacin (20 mg/kg, p.o.) was administered as standard drug. The test compounds were administered at two dose levels (200 and 400 mg/kg) orally 30 min prior to the administration of carrageenan (0.1 ml) in the plantar region of the paw. The paw volumes were measured using plethysmograph at 1, 2, 3, 4 and 5 h after carrageenan administration. The results are presented in Table 3.

Antibacterial activity[22] of the test compounds (10 μg/disc) were tested against B. subtilis, B. cereus, S. epidermidis, S. aureus K. pneumoniae and E. coil using nutrient agar medium (Hi-Media Laboratories, India). The antifungal activity of the compounds was tested against C. albicans and A. niger using Sabouraud dextrose agar medium (Hi-Media Laboratories, India). The sterilized (autoclaved at 1200 for 30 min) medium (40-500) was inoculated (1 ml/100 ml of medium) with the suspension (105 cfu/ ml) of the microorganism (matched of McFarland barium sulphated standard) and poured into a Petri dish to give a depth of 3-4 mm. The paper impregnated with the test compounds was placed on the solidified medium. The plates were pre-incubated for 1 h at room temperature and incubated at 370 for 24 h and 48 h for antibacterial and antifungal activity respectively. Ciprofloxacin (10 μg/disc) and ketoconazole (10 μg/disc) was used as standard for antibacterial and antifungal activity, respectively. The observed zone of inhibition is presented in Table 4.

Minimum inhibitory concentration (MIC)[23] of the test compounds were determined by agar dilution method. A stock solution of the test compounds (10 μg/ ml) in dimethylformamide was prepared and graded quantities of the test compounds were incorporated in specified quantity of molten sterile agar (nutrient agar for antibacterial activity and Sabouraud dextrose agar medium for antifungal activity). A specified quantity of the medium (40-500) containing the compound was poured into a Petri dish to give a depth of 3-4 mm and allowed to solidify. The microorganisms were then streaked on agar plate and the plates were incubated at 370 for 24 and 48 h for bacteria and fungi, respectively. The MIC was considered to be the lowest concentration of the test substance exhibiting no growth of bacteria or fungi. The observed MIC values are presented in Table 4.