In recent years, several 1,2,4-dithiazole and their derivatives were found to have prominent pharmacological activities such as anticonvulsant, analgesic, antiinflammatory activity [1-3]. The present paper reports the synthesis and biological activity of some novel 1,2,4-Thiadiazoles and 1,2,4-dithiazoles. Aromatic/hetero aromatic amines were reacted with ammonium thiocyanate in the presence of concentrated HCl to give aryl thiourea (I). Comp I were oxidatively closed into 3-aryl amino-4-aryl-5-imino-D2-1,2,4- thiadiazoline (II). Compound (II) on reacting with carbon disulfide gave the corresponding 3-thio-5- (N’-aryl-N’-arylguanyl)-1,2,4-dithiazoles. All the compounds showed satisfactory elemental analysis. IR and NMR spectra were consistent with the assigned structure (fig. 1). 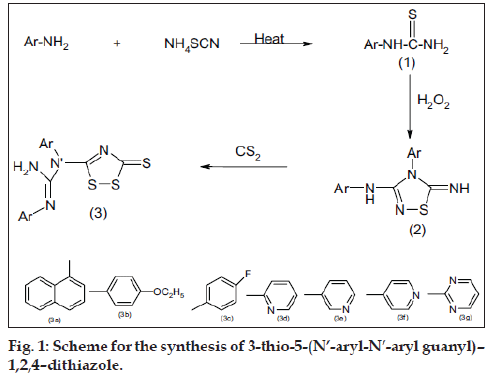 Melting points were determined by open capillary method by using Buchi 530 melting point apparatus and were uncorrected. The purity of the compounds was confirmed by thin layer chromatography using silica gel glass plates and a solvent system of benzene, ethanol (9:1). The spots were developed in iodine chamber and visualized under ultra violet lamp. All the compounds were subjected to elemental analysis (S and N) on Perkin Elemer-2400 instrument and the measured values agreed within ±0.4% with the calculated. 13C-NMR spectra were recorded on 13C Avance Bruker 300 MHz spectrophotometer. IR spectra in KBr disc were recorded on Testcan Shimadzu FTIR 8000. Mass spectra were obtained on Joel SX 102/M- 6000 mass spectrometer applying FAB method.

Aryl thiourea was synthesized using a procedure in which aryl amine (0.1 mol) was taken in a 250-ml beaker containing 100 ml distilled water. Concentrated HCl (10 ml) was added and contents were warmed to dissolve the amine. Ammonium thiocynate (7.6 g, 0.1 mol) was added to the amine solution and the mixture was heated. The mixture was poured on crushed ice, the precipitate thus obtained was filtered off by suction and recrystallised from ethanol. Spectral analysis, m.p. and elemental analysis confirm the formation of the corresponding thiourea

3-amino-4-aryl-5-imino--1,2,4–thiadiazoline (2a-2g) were synthesized by warming corresponding aryl thiourea (1a-1g, 0.5 mol) in a conical flask and dissolving in warm 10 ml of HCl. Hydrogen peroxide (60-70 ml, 20 vol.) was added drop wise from the separating funnel with continuous stirring, the mixture was kept aside for 2 h. The oxidized mixture was diluted with water and separated sulphur was then removed by filtration. The filtrate on neutralization with dilute ammonia, gave precipitate which was collected by filtration and recrystallised from ethanol.

3-thio-5-(N’-aryl-N’-aryl guanyl)–1,2,4–dithiazole (3a-3g) were synthesized by dissolving corresponding thiadiazolines (2a-2g) (0.01 mol) in ethanol (20 ml). Carbon disulphide (12 ml) was added to it and the content was reß uxed for 1h. The solution was cooled and thereafter yellow coloured crystals separate out. The products were recrystallised from ethanol. The physical properties of the title compounds are reported in Table 1.

Table 1: Physical And Spectral Data Of The Compounds (3a-G)

Serial dilution method was used for determining minimum inhibitory concentration (MIC) [4,5] of the synthesized compounds. Bacterial strain of Staphylococcus aureus (MTCC no. 96), Pseudomonas aeruginosa (MTCC no. 424), Bacillus subtilis (MTCC no. 619) and Escherichia coli (MTCC no. 40) and fungal strain of Candida albicans (MTCC no. 227) and Aspergillus niger (MTCC no.1344) were procured from Institute of Microbial Technology, Chandigarh and used in the present study [6,7]. Nutrient broth (beef extract 1 g, yeast extract 2 g, peptone 5 g, sodium chloride 5 g, distilled water q.s. 1000 ml) was used as growth medium for bacteria and Sabouraund’s medium (dextrose 40 g, peptone 10 g, distilled water q.s. 1000 ml) was used for growth of fungus [8,9]. Cook’s procedure of serial dilution was used to determine the MIC. Dimethylformamide (DMF) was used as solvent. A blank test was conducted to check the antimicrobial activity of DMF. The results are in Table 2. The study was simultaneously performed for norfloxacin and clotrimazole as standard drug for antibacterial and antifungal activity respectively.

Initial anticonvulsant evaluation of the compounds was undertaken by the anticonvulsant drug development (ADD) program protocol at National Institute of Health, USA [10,11]. Male albino rats (90-110 g) of either sex maintained in standard conditions for temperature, relative humidity, light/day cycles and fed with normal diet and water ad libitum, were used. Maximal seizures were induced by application of an electrical current across the brain via corneal electrodes. The stimulus parameters were 50 mA, AC in a pulse of 60 Hz for 200 ms (0.2 s). The test compounds were suspended in 0.5% methyl cellulose/water. All the compounds were administered i.p. in doses of 30, 100 and 300 mg/kg to one to four animals. After 30 min and 4 h of drug administration electroshock was applied using corneal electrodes. Disappearance of the hind leg extensor component of convulsion was used as positive criteria.

The test compounds were administered i.p. to all animals in a group in doses of 30, 100 and 300 mg/kg. Thirty min after i.p. injection 60 mg/kg pentylenetetrazole was injected subcutaneously. Observations were taken for absence or presence of clonic convulsive seizures after 30 min and 4h of administration. The results are presented in Table 3

Neurotoxicity studies were performed using the rotorod test [12,13]. Mice were grouped into groups of four animals each and trained to stay stable on an accelerating rotorod of diameter 3.2 cm revolving at the rate of 6 revolutions per min. Animals were administered 30, 100 and 300 mg/kg i.p. of the compounds. Thirty minutes after the injection the mice was placed individually on the rotating rod. Neurotoxicity was indicated by the inability of the animal to maintain equilibrium on the rod for at least one min in each of three trials (Table 3).

Analgesic activity was determined using hot wire ‘Techno’ anlgesiometer provided with an arrangement for circulation of cold water to avoid heating of the area surrounding the wire. Animals of either sex were grouped into groups of six animals each. The rats were then put into a rat holder individually with the tail protruding out of the hole. The tail was then kept on the hot wire of the instrument in such a way that it did not touch the wire. It is presumed that on feeling pain, the rat would withdraw its tail. After 30 minutes of the administration of synthesised compounds (10mg/kg.) the reaction time was determined. Acetyl salicylic acid (10 mg/ kg i.p.) was taken as reference drug. The results are reported Table 3.

The authors are thankful to RSIC, CDRI Lucknow and SAIF, Punjab for spectral analysis. Thanks are due to Dr J. P. Stables and other members of the anticonvulsant drug development program, NIH, Bethesda, USA, for extraordinary help in anticonvulsant evaluation.