Plants contain a wide variety of secondary metabolites that are used either as drugs or lead compounds in the synthesis of interesting chemicals that show promise in drug discovery. Quinones and their derivatives are one such group of specialized compounds that exhibit amazing biological properties. In this study, a benzoquinone derivative phenylvilangin has been synthesized from the naturally occurring embelin and its structure was confirmed by Infrared Spectroscopy, Proton Nuclear Magnetic Resonance, Carbon-13 nuclear magnetic resonance, Distortionless enhancement by polarization transfer and mass spectral analysis. Phenylvilangin has been screened for free radical scavenging and cytotoxic by in vitro methods wherein it exhibited significant activities suggesting that it could be a compatible material for further investigation to develop as a potential drug candidate. On comparison of the above bifunctional activities of phenylvilangin with those of the parent quinone embelin and another derivative vilangin, it has been found that phenylvilangin possessed better potential than the other two compounds.

Embelin (compound 2), a naturally occurring benzoquinone, has been reported to possess a plethora of biological activities[1]. Vilangin (compound 3), the dimer of compound 2, has earlier been studied for antimicrobial, antioxidant and anticancer properties[2]. In this report, the synthesis and characterization of phenylvilangin (compound 1) by spectroscopic data (Infrared Resonance (1HNMR), Carbon-13 nuclear magnetic Spectroscopy (IR), Proton Nuclear Magnetic resonance (13CNMR), Distortionless enhancement by polarization transfer (DEPT) and Mass Spectroscopy (MS)) are presented in addition to its free radical scavenging and cytotoxic activities. The activities of compound 1 have also been compared with those of compound 2 and compound 3. Compound 2 has been isolated from the berries of Embelia ribes Burm.f. (Family: Primulaceae)[3] and compound 3 was synthesized from compound 2 as per the reported procedures[2]. Compound 1 has been prepared by the following procedure. A mixture of 2 (3 g) and benzaldehyde solution (0.5 g) were taken in 100 ml of acetic acid in a round-bottom flask. With vigorous stirring, the reaction temperature was maintained at 40-45o in a water bath. After 10 min, the reaction mixture was allowed to cool wherein a bright orange compound 1 precipitated. It was filtered and crystallized from acetone (melting point: 258-260°). The purity of the final product was assessed by Thin Layer Chromatography (TLC). The structure has been confirmed by spectral data. IR: νmaxKBr (cm-1): 3416 (hydroxyl), 3153 (=C-H stretch; aromatic), 2925 (bridged -C-H stretch), 2854 (-C-H stretch; alkyl), 1623 (quinine carbonyl), 1400, 1344, 1320, 1124, 750 (rocking methylene), 697 (methylene bending). 1HNMR (600 MHz, CDCl3, ppm): δ7.28 (5H, m, aromatic protons), 5.69(1H, s, bridged H-a), 2.42(4H, t), 1.46(4H, m, H-c), 1.29 (34.87H, t, H-b), 0.88 (6H, t, H-d) (fig. 1). 13CNMR (150 MHZ, CDCl3 , ppm): δ170.7 (C-1,C-4,C-1’,C-4’), 138.2(C-3, C-3’), 133.8 (C-6, C-6’), 130.3(C-19), 128.6 (C-2,C-2’), 128.5(C-20, C-24), 126.9(C-21, C-23), 116.7(C-22), 113.9(C-5, C-5’), 36.6(C-18), 32.0(C- 15, C-15’), 29.7(C-9,C-10,C-9’,C-10’), 29.6(C-11, C-12, C-13, C-11’, C-12’, C-13’), 29.4 (C-14,C-14’), 28.0(C-8,C-8’), 22.8(C-7, C-7’, C-16,C-16’), 14.2(C-17, C-17’). DEPT: Showed the presence of two methyl carbons, twenty methylene carbons and one methine carbon suggesting the molecular weight as 676. MS (rel. Int.): m/z=675 [M+-H]. The structure of compound 1 has been arrived at based on the above spectral information combined with those of compound 2 and compound 3. The free radical scavenging and anti-tumor potentials of compound 1 were evaluated by 2,2-diphenyl-1-picrylhydrazyl (DPPH) method[4] and cytotoxic activity by 3-(4,5-Dimethylthiazol-2- yl)-2,5-Diphenyltetrazolium Bromide (MTT) assay using Michigan Cancer Foundation-7 (MCF-7) cell lines[5]. These activities were also compared with the parent quinone compound 2 and the dimer, compound 3. Embelin possesses a wide variety of biological activities, the prominent one being its anti-tumour[3] and antioxidant potential[6]. The compound’s tolerance of toxicity up to the oral dose of 3000 mg/kg body weight in rats indicated its safety[7]. Due of the widespread applications of compound 2, its derivatives have also been screened for a battery of biological activities. In this study, compound 1, another derivative of compound 2 has been synthesized from the latter (fig. 2) and its structure was confirmed by spectroscopic methods. The free radical scavenging and cytotoxic activities of compound 1 has been carried out in in vitro models (DPPH and MTT assay) and the results are presented in Table 1 and 2 respectively. The studies revealed that compound 1 exhibited a significant radical scavenging activity when compared to standard drug ascorbic acid. Compounds 2 and 3 showed relatively less activities. Quinones are acknowledged as potent antioxidants and reported to possess strong free radical scavenging properties. In the in vitro methods, the DPPH employed has relatively stable nitrogen-centered free radical that can easily accept an electron or hydrogen radical to become a stable diamagnetic molecule. From the data, it might be proposed that compound 1 could able to reduce the stable free radical of DPPH to the yellow-coloured diphenyl picrylhydrazine exhibiting better free radical scavenging activity in comparison with the standard drug ascorbic acid. The structural-activity relationship study revealed that the antioxidant activity of compound 1 could be attributed to the electron donating nature of the –OH on hydroquinone scaffold followed by reduction of free radical DPPH and prevention of cell damage. The cytotoxic study data revealed that compound 1 had higher activity towards cancerous MCF-7 cell line at low concentration with IC50 value 56 μg/ml. This might be attributed to the sensitivity of cancer cell over compound 1 as well as the difference in membrane structure and protein composition[8]. Further the significant antitumor activity of compound 1 may also be attributed to its molecular size, hydrophobic nature of undecayl carbon chain and steric hindrance which might have improved its cellular permeability and restriction towards cancer progression[9]. 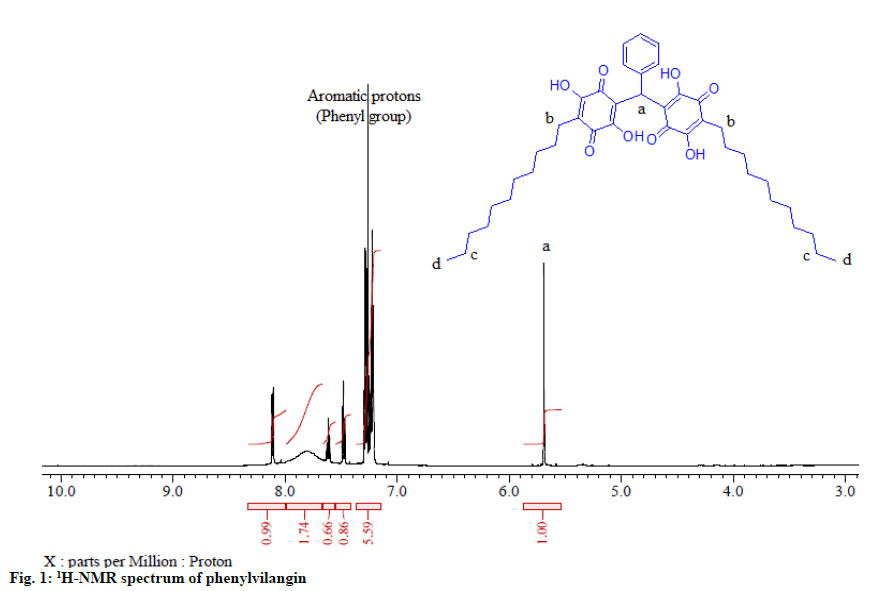 The authors thank the management of Saveetha Institute of Medical and Technical Sciences (SIMATS), Chennai for facilities and encouragement. They also express their thanks to Sophisticated Analytical Instrumentation Facility, I.I.T.Bombay, Mumbai for recording spectral data of the compounds.