The interaction of cell-penetrating peptide human immunodeficiency virus transacting activator of transcription, peptide Tat (49–57), which is the minimal transduction domain of human immunodeficiency virus Tat protein, with calf thymus DNA was investigated with UV/Vis spectroscopy, fluorescence spectroscopy, circular dichroism, and viscometry. Peptide Tat (49–57) could interact with DNA via the groove binding mode, which is accompanied with electrostatic interaction. The fluorescence experiments revealed that the binding constant was 2.63×105 l mol−1. The UV/Vis spectroscopy and circular dichroism results revealed that the interaction of Tat (49–57) binding with calf thymus DNA disturbed the acting force of accumulation between DNA base pairs. The antimicrobial study using Tat (49–57) against bacteria proved that Tat (49–57) possessed antimicrobial activity against both Gram-positive and Gram-negative bacteria with low hemolysis.

Cell-penetrating peptides, also called protein transduction domains (PTDs), are short cation peptides that can traverse the cell membranes [1-3]. During their cellular uptake, they can deliver various molecules into cells; these molecules include peptides, proteins, oligonucleotides, and nanoparticles [4-8], most of which otherwise cannot cross the cell membranes by their own. Transacting activator of transcription protein transduction domain (Tat-PTD) is derived from the Tat protein of human immunodeficiency virus (HIV) and is widely used to deliver different molecules into cells with causing non cellular injury and no toxicity [3, 9,10]. The cell-penetrating property of Tat-PTD results from its basic epitope (amino acids 49-57), which is the minimal transduction domain of Tat protein, includes two lysine’s and six arginine’s within a linear sequence of nine amino acid residues (RKKRRQRRR). Tat (49-57) is a short cationic peptide, possessing a high net positive charge at physiological pH. Recent studies proved that TAT can form transient pores and translocate across the membranes by diffusing on these pores, on account of the strong electrostatic attraction between positively-charged Tat (49-57) and negativelycharged phospholipid [3,11].

After penetrating the cell membranes, Tat-PTD locates in the cell nucleus [12,13], and the uptake into the nucleus precedes its digestion [14], thereby suggesting that the intracellular Tat-PTD can bind to DNA. DNA possesses a crucial role in the whole biological process; consequently, DNA becomes a pharmacological target for various kinds of antimicrobial drugs [15]. Thus, illuminating the binding mode of Tat-PTD with DNA can help understand the molecular mechanisms of drug action and can provide modification guidelines to enhance the clinical efficacy and bioavailability of Tat- PTD and its derivatives.

UV/Vis spectra were recorded on UV-3600 spectrometer (Shimadzu Corporation, Japan) using quartz cuvettes (10 mm path length). Absorption titration experiments were conducted by maintaining the concentration of ct-DNA (50 μM) and changing the Tat (49-57) concentration. The UV/Vis measurements were carried out after the solutions were equilibrated for 10 min. During absorption measurements, equal concentration of Tat (49-57) was subtracted to eliminate the background absorption in the range of 190-350 nm.

Fluorescence spectra were recorded in 10 mm quartz cells on a Cary Eclipse spectrofluorometer (Agilent, Australia). EB was used in fluorescence measurements as fluorescence probe. About 3 ml of ct-DNA-EB complex solution containing ct-DNA (50 μM) and EB (5 μM) was constant and titrated with peptide Tat (49- 57). The mixtures in all experiments were allowed to stand for 10 min to equilibrate before measurement. Emission spectra were measured in the range of 500- 750 nm at the excitation wavelength of 262 nm.

DNA melting studies were carried out via monitoring the fluorescence intensities of DNA-EB and DNAEB- Tat (49-57) complex at 20-100°. The temperature was monitored by a thermostat attached to the sample holder. The melting temperature (Tm) of DNA was determined as the transition midpoint.

CD measurements were conducted on a Mos-500 spectropolarimeter (Bio-Logic, France). The ct-DNA solution (50 μM) in Tris-HCl buffer (pH 7.4) was titrated with Tat (49-57). Equal concentrations of Tat (49-57) were subtracted from the corresponding spectra of samples. The CD spectra were recorded in the range of 220-320 nm using 10 mm path length cell at 37°.

Viscosity measurements were conducted via Ubbelodhe viscometer maintained at 25±0.1° in a thermostat water bath. Different amounts of Tat (49-57) were added to ct-DNA with constant concentration (50 μM). After equilibrium for 15 min, the flow time of samples was measured in triplicate to obtain the concurrent values using a digital stopwatch. The data were presented as (η/η0)1/3 versus CTat (49–57)/CDNA, where η0 and η are the specific viscosity of DNA in the absence and presence of Tat (49-57), respectively.

Broth microdilution method [3] was used to examine the antibacterial activities of Tat (49-57). About 100 μl of Tat (49-57) solution (serial two-fold dilutions in sterile water) was added to 100 μl of bacterial suspension (2×104 CFU/ml) in 1% peptone. The medium without bacteria was used as negative control. After incubation at 37° for 20 h, the minimal inhibitory concentration (MIC) was determined.

Haemolysis activity of Tat (49-57) was tested against human erythrocytes. Human blood was collected in a tube containing heparin sulphate from a healthy volunteer after written informed consent under a protocol approved by Zhengzhou University Life Science Ethics Committee. The fresh blood was centrifuged (2000×g, 3 min, 4°) to collect erythrocytes and subsequently washed with PBS (10 mM phosphate buffer, pH 7.4) for 5 times [18]. Serial two-fold dilutions of Tat (49-57) were performed in PBS buffer and added to 4% (v/v) erythrocytes dispensed in 96-well plates. The mixture was incubated at 37° for 30 min. Erythrocytes without Tat (49-57) and 0.1% (v/v) Triton X-100 were employed as negative and positive controls, respectively. The supernatants were obtained, and the absorbance was measured at 570 nm. The hemolysis was calculated using the following Eqn., haemolysis (%)=[(ATat (49–57)–APBS)/(ATriton–APBS)]×100. 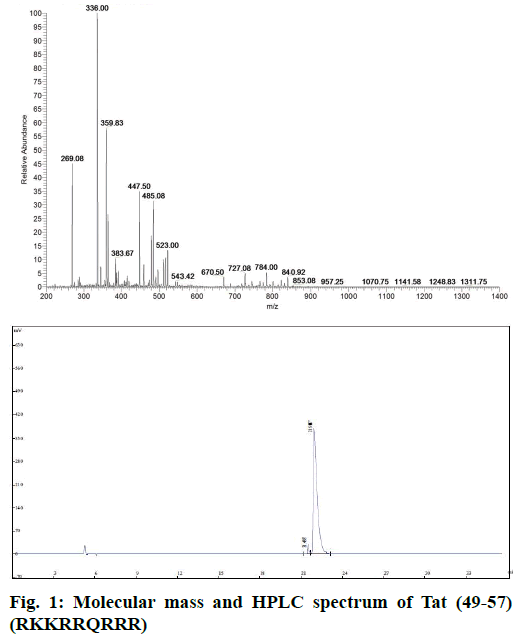 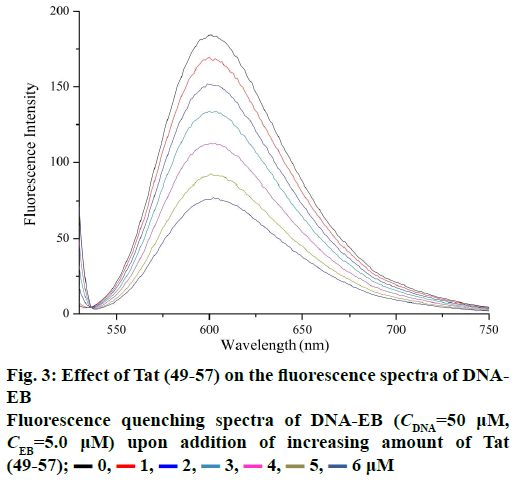 The quenching type, which can be classif﻿ied as dynamic quenching and static quenching, was analysed with the Stern-Volmer Eqn. Kq was obtained from the intercept of the linear of F0/F versus Q (Figure 4). For Tat (49-57), the value of Kq was 6.41×1012 l×mol-1×s-1, which was much higher than the value of the maximum scatter collision quenching constant of various quenchers with biomolecules (2.0×1010 l×mol-1×s-1) [29]. This finding suggests that the quenching type of Tat (49-57) binding with DNA is static quenching. The binding constant (K) and binding site (n) of Tat (49-57) with the DNA EB complex was evaluated with the following Eqn., log[(F0-F)/F] =logK+n log [Q]. Log [(F0-F)/F] versus log [Q] was plotted, and a line with a good linear correlation was obtained (Figure 5). According to this line, binding constant K was determined to be 2.63×105 l×mol-1, and n was 1.12. K was similar to the value that had been well-established among groove binding agents [30]. 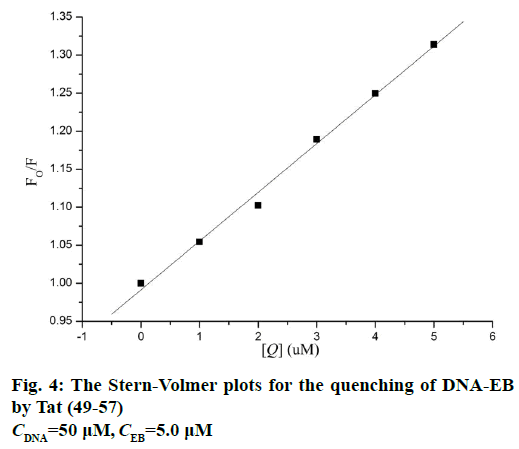 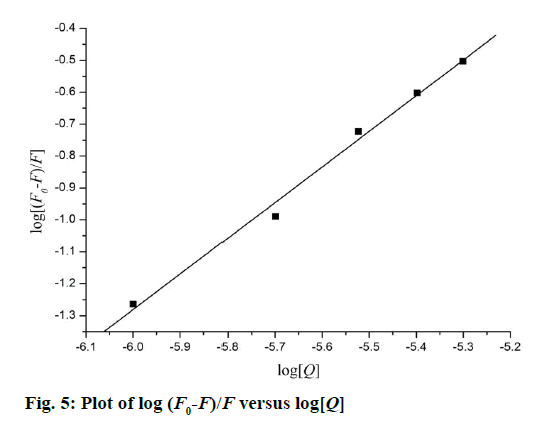 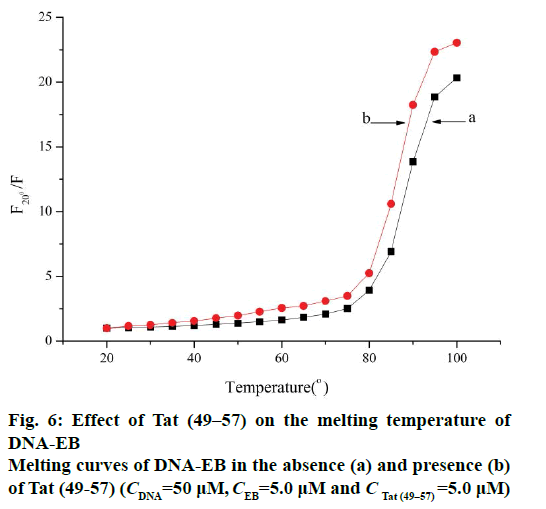 The changes in the secondary structure of DNA during molecule-DNA interactions can be determined through CD spectroscopy [31]. The specific CD spectrum of B-form DNA consists of a negative band at 247 nm caused by the right-handed helicity of DNA and a positive band at 275 nm caused by the accumulation of base pairs [15]. The CD spectra of ct-DNA with Tat (49- 57) are shown in Figure 7. The positive band at 275 nm decreased remarkably with an apparent red shift, and the band at 245 nm gained slight negativity without a major red shift. The decrease in the positive band at 275 nm indicated that the binding of Tat (49-57) weakened the stacking interactions between base pairs of DNA [32], and the slight increase in the negative band at 245 nm revealed that the interaction of Tat (49-57) with DNA tightened the double helix of DNA. These results are consistent with the UV/Vis spectroscopy results. 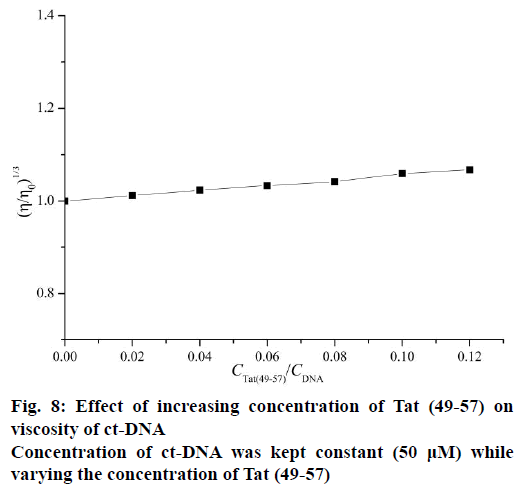 In the proposed study, the interaction between Tat (49-57) and ct-DNA was studied through UV/ Vis spectroscopy, fluorescence spectroscopy, CD spectroscopy and viscosity measurements. The results indicated that Tat (49-57) can bind to DNA through minor groove binding. The results were supported by competitive binding assay with EB, DNA melting, and viscosity measurement studies. Tat (49-57, RKKRRQRRR) is an Arg-rich peptide, similar to Q/ RGR-motif peptides [36]. Its side chains have the ﬁrst and last residues (R). Tat (49-57) may directly contact the minor groove of AT-rich sequences via inserting guanidine and amino groups from Tat (49-57) side chains into the minor groove. Tat (49-57) also displayed antibacterial activity, with an MIC value within the 8-16 μM range; it showed no haemolysis of human erythrocytes in all the tested concentrations. This study on the antibacterial activity and DNA binding of Tat (49-57) is expected to provide valuable information on the mechanism of the antimicrobial activity of Tat (49- 57) and could be useful for peptide drug design with highly effective bioactivity.