Benzoyl chloride was added to the solution of anthranilic acid in pyridine to afford crude 2-phenyl-benzo[d][1, 3] oxazin-4-one (1). To the solution of compound 1 in dry toluene, various substituted anilines were added and the mixture refluxed for 8 h to afford 2-phenyl-3-(substituted phenyl)-3H-quinazolin-4-ones (2a-2f). All the compounds were obtained in solid state in yields varying between 40 to 70%. Spectral characterization included FTIR, 1 H NMR and Electrospray MS. The synthesized compounds were screened for 5-HT 2 antagonist activity. Some of the title compounds have been found to show significant 5-HT 2 antagonist activity. The compound 2b, 3-(2-chlorophenyl)-2-phenyl-3H-quinazolin-4-one was the most potent derivative in the series of compound synthesized.

Serotonin receptors (5-HT2) receptors are of significant clinical interest because of their involvement in various disorders [1,2]. Centrally acting 5-HT2 antagonists have shown promising effects in animal models for anxiety [3], depression [4] and in certain drug abuse models [5-7]. In schizophrenic patients, improvement of negative symptoms [8] and extra pyramidal symptoms [9,10] has been demonstrated by 5-HT2 antagonists.

Quinazolines linked to aryl moiety are reported as anticonvulsant, antidepressant, tranquilizer and antagonist of 5-HT2 receptors [11-15]. In view of these observations, we herein report the synthesis of 2-phenyl-3-(substituted phenyl)-3H-quinazolin- 4-ones and evaluate them for 5-HT2 antagonist activity. Our synthetic efforts were directed to Þ nd the effect of substitution in the phenyl ring on the antagonistic activity at 5-HT2 receptor.

Melting points of the synthesized compounds were determined by open capillary method and are uncorrected. Thin layer chromatography of synthesized compounds was performed on precoated silica gel G254 plates and visualized in iodine or UV. The IR spectra of synthesized compounds were recorded on Perkin-Elmer FTIR in potassium bromide discs. The proton nuclear magnetic resonance (1H NMR) was recorded in NMR Varian Mercury 300 MHz. The solvents used were DMSO-d6 and acetone. Chemical shifts are reported in δ ppm, downÞ eld from tetramethylsilane (δ 0.00). Splitting patterns are designated as singlet (s), doublet (d) and multiplet (m). The electrospray mass spectra (ESMS) were recorded on a Micromass Quattro II triple quadrupole mass spectrometer. Elemental analysis was performed (C, H and N). All the target compounds and the reference olanzapine were orally administered (5-HTP was intraperitoneally administered). All protocols of animal experiments have been approved by Institutional Animal Ethics Committee. Antagonism of serotonin (5-HT2) receptor was studied by inhibition of L-5-hydroxytryptophan induced head twitches behaviour [16].

Group of six male Wistar rats (180-280 g) was used in this test procedure. Sixty minutes prior to scoring head twitch behaviour, L-5-hydroxy tryptophan (5- HTP) was administered intraperitoneally at dosage of 10 mg/kg. Thirty minutes following the injection, test compounds were administered orally. Control group were administered the appropriate vehicle. Sixty minutes post 5-HTP administration; each animal was individually placed in a clear plastic cage and observed for head twitch response [16]. The number of head twitches per animal was recorded over a 10 m interval and the total summed for each group. The percentage change from control for each group was then calculated. ED50 values were calculated by sigmoidal dose-response curve analysis using the program PRISM (Graph pad Software). P-value less than 0.05 (P<0.05) was considered statistically signiÞ cant. 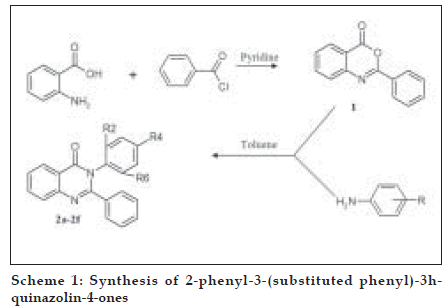 General method for the preparation of 2-phenyl-3- (substituted phenyl)-3H-quinazolin-4-ones (2a-2f) is as follows. To a solution of compound 1 in dry toluene, substituted anilines were added and the mixture reß uxed for 8 h. The mixture was allowed to cool to room temperature and then poured in ice cold water. The precipitated solid was separated and dried to afford the target compounds 2-phenyl-3- (substituted phenyl)-3H-quinazolin-4-ones (2a-2f). All the compounds were recrystallized in methanol. The characterization and spectral data of the synthesized compounds is given in Tables 1 and 2, respectively.

aElemental analyses results were within ± 0.4% of the calculated values, bMelting points are expressed in ûC and are uncorrected, cSolvent for recrystallization is alcohol, dYields are not optimized, eMobile phase is 20 % EtOAc-benzene

The IR spectra of the title compounds 2a-2f showed characteristic absorption peaks in the range 1665- 1680 cm-1, assigned to carbonyl stretching in δ lactams. The 1H NMR spectral studies showed multiplets in the range 6.91-7.09, 7.13-7.19 and 7.73-8.1δ, assigned respectively to phenyl at C3, phenyl at C2 and the protons at C5, C6, C7 and C8. The ES MS of title compounds showed their respective (M+H)+ peaks. All these observations confirmed the structures of the title compounds 2a-2f. Characterization data of the synthesized compounds is given in Table 1 .

The propensity of title compounds to antagonize 5-HTP induced head twitch was evaluated and their respective ED50 values are reported in the Table 3. Our synthetic efforts in the series of compounds synthesized were directed to find the effect of electronic character of the substituent in phenyl ring on the afÞ nity for 5-HT2 receptor. As is evident from Table 3, the efficacy of the compounds to antagonize the head twitch depended greatly on the nature of substituent. Of the synthesized compounds, not all were able to antagonize the head twitches induced by 5-HTP. The presence of electron withdrawing groups (Cl and F) at ortho- and para- positions lead to potent derivatives 2b and 2c. Substitution of the orthohydrogen by electron donating group (-OCH3) decreased the potency; however it was more potent than the unsubstituted compound 2a. Di-substitution with methyl at 2, 4 and 2, 6 positions yielded the least potent members of the series, i.e the compounds 2d and 2e. The most potent compound in the series was 3-(2-chlorophenyl)-2-phenyl-3Hquinazolin- 4-one (compound 2b). Thus, the series synthesized afforded compounds having varying degree of afÞ nity for the 5-HT2 receptor and offers interesting series of molecules to be worked upon for reÞ nement of biological activity.

Table 3: Inhibition of head twitches after administration of test and reference compound