2-(dimethylamino)-3-(5-(pyridin-2-yl)-1H-tetrazol-1-yl)naphthalene-1,4-dione (2) has been synthesized. The UV/Vis studies of 2-(dimethylamino)-3-(5-(pyridin-2-yl)-1H-tetrazol-1-yl)naphthalene-1,4-dione (2) with different metal ions were performed in aqueous dimethylformamide and were correlated with fluorescence studies of the same. The compound showed higher selectivity and sensitivity for Zn2+ ions. Thus this compound could be utilized as a turn-on probe for fluorescent imaging of Zn2+ ions in living cells.

Metals like Na+, K+ and Mg2+ play an important role in biological systems, which enables different processes like transmission of information[1-5]. d-Block metals such as zinc (Zn2+) and copper (Cu2+) play important structural and catalytic roles in neurology related diseases like neurophysiology and neuropathology. Accumulation of metals like Cd2+ in the brain leads to cancer[6]. This ion binds in high concentrations in brain systems. In case of brain injury, Zn2+ ions induce the selective neuronal cell deaths[7]. Even though the roles of various metal ions in biological systems are known, the full mechanism of the process is still unknown. Compared to conventional techniques like atomic absorption spectroscopy[8] and autoradiography[9], molecular imaging with fluorescent probes, genetically encoded sensors and hybrid probes are playing vital roles to label or sense the presence of metals[10]. In this view, various chemical probes are developed to study the fluorescence phenomena[11]. As per the existing literature, probes should not contain their excitation in UV range as they can either damage the cells or emit auto-fluorescence by biological system[12]. To overcome this defect, various groups developed different chemical probes, which are having excitation in long wavelength region[13-16].

The work reported by Raulin[17] and Frederickson et al.[18] left great encouragement for the development of chemical probes especially for the Zn2+ ions. Recently G-quadruplex protein binding probes were developed for the detection of specific biomarkers associated with various human diseases[19-22]. The use of different fluorophores like pyrazoline, cynanine and rhodamine dyes have been developed as various chemical probes to identify specific metal like Zn+2, which is the highest abundant metal after iron in the human body[23-29]. Bioinformatic researchers have also shown the importance of Zn+2 in the biological systems[30-32]. In the present work, a chemical probe was synthesized, which has an excitation in the visible region. The probe was allowed to complex various metal ions in aqueous dimethylformamide (DMF) and their UV/Vis and fluorescence properties were studied.

All reagents were purchased from Sigma-Aldrich and were used without further purification. DMF (AR grade) was used toperform analytical studies. Metal chloride salts procured from Merck were used as the source for metal ions. The solvents used in the synthesis were distilled before use. Absorption measurements were carried out using a Shimadzu UV-1800 spectrophotometer. Fluorescence spectra were recorded on a Perkin-Elmer LS55 spectrophotometer.

The synthetic route started from picolinonitrile by following the method available in the literature to form the tetrazole 1 and the structure was confirmed by comparing the analytical data of 1 with the reported data[29]. Tetrazole 1 on alkylation with 2,3-dichloronaphthalene-1,4-dione in dry DMF in presence of potassium carbonate at 110° afforded a single isomer by alkylation at N(2) position of tetrazole rings (Figure 1). The 1H NMR spectra of compound 2 showed characteristic pyridine peaks at δ 8.81, 8.32, 7.88 7.43 and those of naphthaquinone were at δ 8.18- 8.08, 7.84-7.67. The six protons for N,N-dimethyl group appeared at δ 2.95 as a singlet (Figure 2). The 13C NMR showed a characteristic peak at δ 165.5 (Figure 3) proved the alkylation at N2 position [29]. The absence of peak at δ 153, which was characteristic of N1 isomer is also proved the formation of N2 isomer. The ESI-MS showed (M+1) peak at 347 (Figure 4), which proved the structure of the compound. 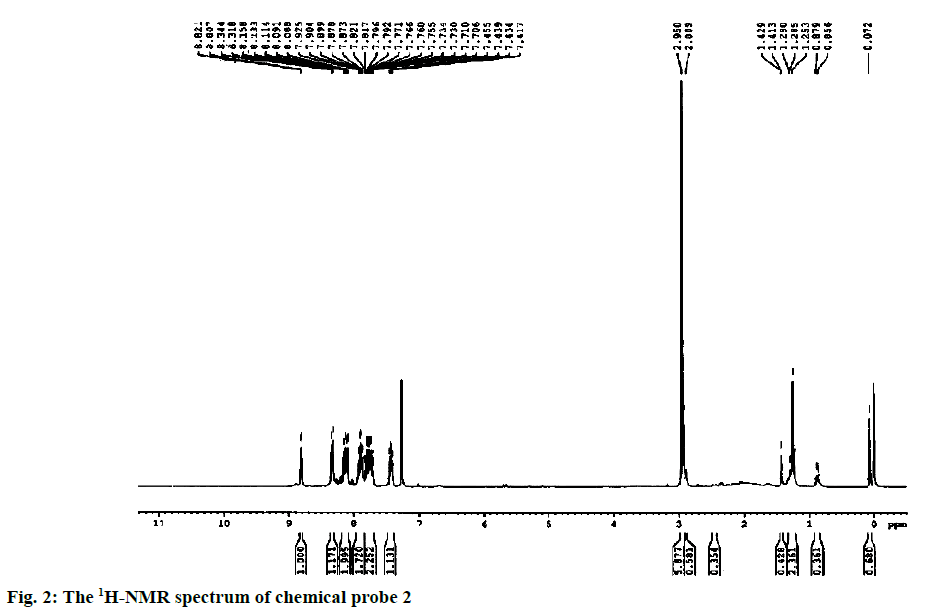 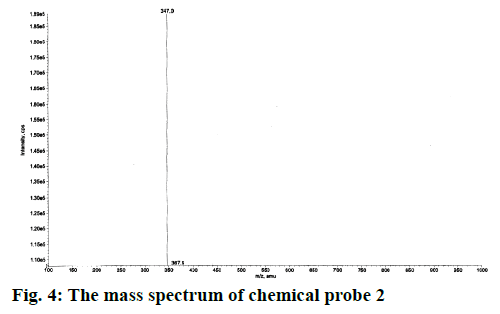 The fluorescence properties of chemical probe 2 at 436 nm were investigated in PBS buffer (20 mM pH 7.4) solution (DMF:water = 2:8). The emission maximum for all the complexes was observed at 549 nm. After addition of Co2+, Ca2+, Ba2+, Ni2+, Cu2+, Pb2+, Na+ and K+ is not shown any significant change in emission. Whereas Zn2+ ions showed the more enhancement in the fluorescence intensity is shown in Figure 6. This observation is revealed that the formation of a complex between chemical probe 2 and Zn2+ ions and highest selectivity of chemical probe 2 to Zn2+ is disclosed. This can be assigned to π→π* transition and an intra-molecular charge transfer band from the naphthoquinone tetrazole moiety. This indicates the selectivity of compound 2 towards specific metal ion (Zn2+) with its high fluorescence emission peak. Therefore the compound 2 can be utilised as a turnon fluorescent probe for the detection of Zn2+ ions in living cells. 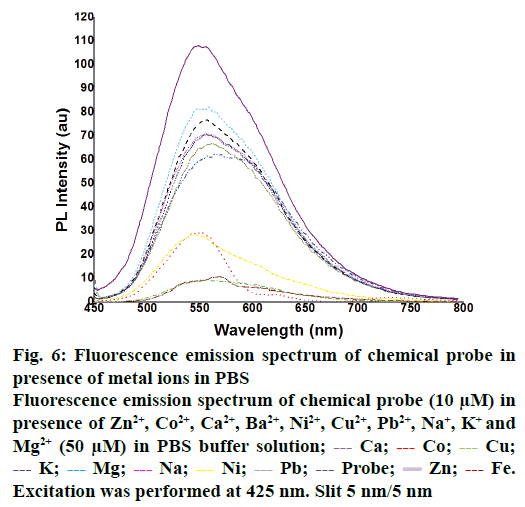