Recent advances in cancer research highlighted the importance of target-specific drug discovery. In view of these advances, the most important mechanism in tumour growth is its ability to stimulate the formation of blood capillaries around itself called tumour-driven angiogenesis. Hence targeting the angiogenesis, inhibits the growth of blood vessels around it and responsible for death of the tumour due to starvation and accumulation of toxic waste. The therapy, thus, indirectly cytotoxic to the tumour cells by targeting newly developing blood vessels. In this review, we summarised the various antiangiogenic agents with their clinical uses and current status.

Angiogenesis is the phenomenon of formation of new blood capillaries from existing small blood vessels. It usually accounts for normal physiological and pathological changes involved in normal functioning of body, like development of endometrium during menstrual cycle or during wound healing. A tumour consists of a group of cancerous cell, which are bodies own cells but have lost their ability to divide in controlled fashion. For their growth they require oxygen and nutrients, this demand can be fulfilled by the angiogenesis. Hence, it was hypothesised that angiogenesis is a factor enabling malignant tumour growth in cancer [1].

As shown in fig. 1, growth factors like VEGF or bFGF are first trascripted inside the tumour cell by the hypoxia inducible factor-α, followed by their translation and secretion. When they encounter endothelial cells, they bind with specific receptors know as receptor tyrosine kinase (RTK) present on the endothelial cells. This binding causes the receptor to undergo autophosphorylation, which stimulates Mitogen-activated protein kinases (MAPK) pathway. This pathway causes the secretion of proteases, like matrix metalloproteinases (MMPs). This group of enzymes is responsible for the degradation of the basement membrane present on the endothelial cells of blood vessel and making them to migrate towards the stimulus [3]. 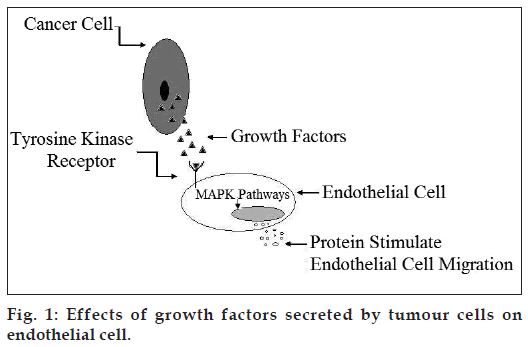 By considering the fact that tumour stimulates the formation of blood vessels, development of antiangiogenic agents will have potential anticancer activity. Antiangiogenic agents induce their effect by inhibiting the enzymes responsible for proliferation, or sequestering the growth factor or inhibiting the receptor responsible for binding with growth factors. Most of the available literature points out that newly formed blood vessels are highly selective towards low dose of antiangiogenic agents [4,5]. These agents include humanised monoclonal antibodies (HMABs) against growth factors, matrix metalloproteinases inhibitors (MMPIs), and small molecule inhibitor of tyrosine kinase.

HMABs act by either directly blocking the receptor or exfoliating growth factors [6]. Both the mechanisms prevent the activation of the receptor, thereby blocking the signalling cascade responsible for secretion of MMPs [7]. These agents are specific for particular protein, e.g. bevacizumab is humanised monoclonal antibody against VEGF, cetuximab and panitumumab against endothelial growth factor receptor (EGFR) (Table 1).

MMPs are a group of enzymes, which are destructive in nature and require zinc ion (Zn+2) for their activity. They play an important role in normal turnover and remodelling of extracellular matrix. It has been reported that, MMPs are over expressed in a variety of malignant tumour types and this is associated with tumour growth and metastasis potential. MMPs degrade the basement membrane and extracellular matrix present on parent blood vessel, making endothelial cells to migrate from their original place and play a pivotal role in angiogenesis. Inhibition of MMPs prevents metastasis and progression of angiogenesis, therefore, can actively peruse as an antiangiogenic agent. Table 2 gives the current status of the MMPIs as antiangiogenic agents. Inhibitors of MMPIs are categorised as peptidomimetic inhibitors, nonpeptidomimetic inhibitors, modified tetracycline derivatives [13].

Table 2: Types of Matrix Metalloproteinases Inhibitors With Their Generic Name and Current Status.

Compounds of peptidomimetic inhibitors (first generation MMPIs) class are hydroxamic acid derivatives designed to mimic the structure of collagen at the site where the MMPs are thought to bind for the cleavage. Compounds like marimastat and batimastat (fig. 2) bind reversibly at the active site of the enzyme in stereospecific manner and chelate the zinc ion present on the enzyme active site [14].

First generation MMPIs are nonselective and also exhibits poor oral bioavailability due to peptide nature. The second generation MMPIs (Nonpeptidomimetic inhibitors) lacks the peptide backbone and shows improved selectivity towards MMPs [15] (fig. 3). Examples include BAY-12-9655, AG 3340 and BMS 275291. Phase III studies showed that continuous administration of BAY-12-9655 with placebo in patients with small cell lung carcinoma did not improve the outcome of chemotherapy. It also showed inferior survival of patients treated with BAY-12-9655. Hence, clinical development of BAY-12-9655 has been suspended [16]. AG 3340 is a nonpeptide, collagen mimicking MMPIs. It shows inhibition of tumour growth and angiogenesis in xenograft models of prostate, colon, breast and non-small cell lung carcinoma [17,18]. In vitro, BMS 275291 exhibits antiangiogenic effects in renal assay and in vivo it inhibited the growth of B16F10 murine melanoma and reduced the size and metastases of the rat HOSP-1 mammary carcinoma [19,20].

Modified tetracycline derivatives not only inhibit the activity, but also the production of MMPs. Newer tetracycline analogues are chemically modified tetracyclines (CMT), which lack their antibacterial properties. This is achieved by removal of dimethyl amino group from C-4 of ring A [21]. These agents are thought to be act by, blocking the activity of MMPs by chelation of zinc atom at the enzyme's active site, interfering with the proteolytic activation of pro-MMP into their active form, reducing the expression of MMPs, protecting MMPs from proteolytic and oxidative degradation [22-24]. There are many CMT from CMT-1 to CMT-10, but out of which CMT-3 called as Col-3 is most active in the series. Table 2 describes the details of the MMPIs inhibitors.

Endothelial growth factor receptor tyrosine kinase inhibitors were developed with the lead molecule 4-anilinoquinazoline. Structure-activity relationship (SAR) studies proved that quinazoline moiety is absolutely essential for activity. Sixth and seventh position of the quinazoline moiety must be substituted with electron withdrawing substitutients. Second, seventh and eighth position must remain unsubstituted. The anilinic nitrogen must be secondary for optimal activity. The SAR studies on the lead structure led to compounds viz. gefitinib and erlotinib. Table 3 and fig. 4 give the details of the clinical applications and the current status of EGFR TKIs [30]. 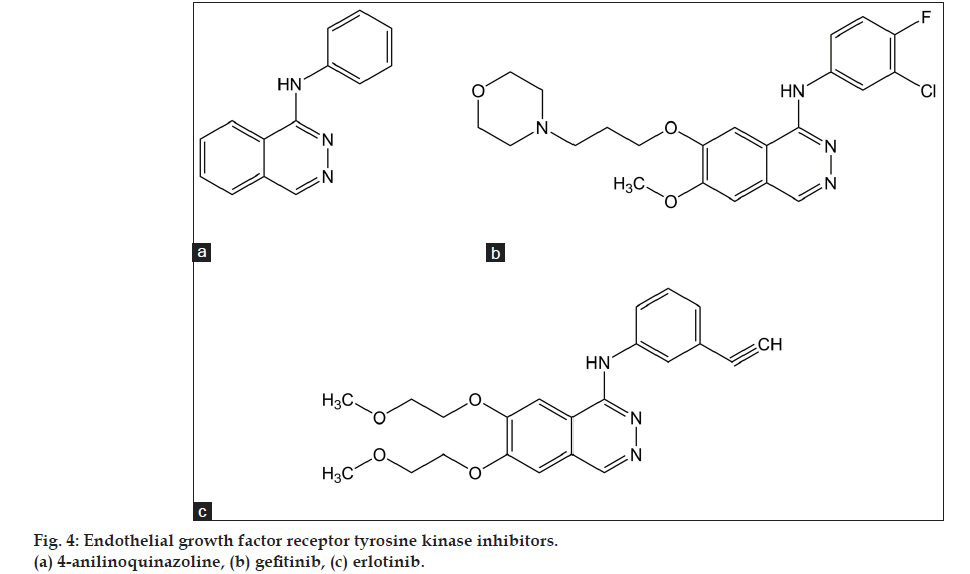 According to SAR studies of VEGFR TKIs (fig. 5) 4-anilinoquinazoline moiety is of extreme importance for activity. A small lipophilic, electron deficient substitution at C-2 position and a large lipophilic electron withdrawing substitution at C-4 position on anilinic phenyl ring are better for activity. Furthermore, the introduction of basic, nitrogen containing side chain at C-7 position improves activity. It may include morpholine, piperidine, or pyrolidine however, most active compounds were observed when C-7 substitution was N-methylpiperidine. When attached directly, the N-methylpiperidinoxy to C-7 quinazoline ring showed weaker activity, however, insertion of a methylene group in between with C-6 position substituted with methoxy group gave most active compound ZD 6474 [33]. 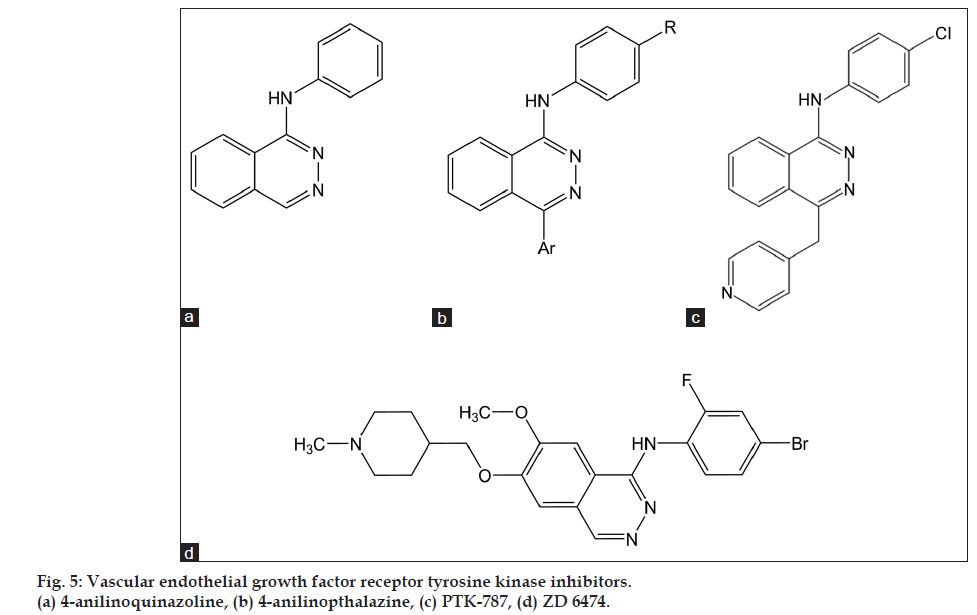 Multiple tyrosine kinase inhibitors (Table 4 and fig. 6) like SU 5416 was one of the initial, and probably the most extensively studied kinase insert domain receptor (KDR, VEGFR-2) inhibitor, and the first specific synthesized inhibitor of VEGF-RTK activity. It showed growth inhibition in mouse xenotransplants of human tumours; also demonstrated promising antiangiogenic and antitumour effects in animal models [35]. SU 11248 is a small molecule inhibitor of multiple tyrosine kinases, including VEGFRs 1, 2, and 3; stem cell factor receptor (c-KIT); platelet-derived growth factor receptors (PDGFRs) a and h; Fms-like tyrosine kinase 3 (FLT3); colony stimulating factor receptor type 1 receptor (CSF-1R); and the glial cell line-derived neurotrophic factor receptor (RET) [36]. BAY-43-9006: It’s a multikinase inhibitor with activity against Raf kinase and several RTKs, including VEGFR2, PDGFR, FLT3, RET, and c-Kit [37]. ABT-86 is a structurally novel, RTK inhibitor that is a potent inhibitor of members of the VEGF and PDGFR families but has much less activity against unrelated RTKs, soluble tyrosine kinases, or serine/threonine kinases. The inhibition profile of ABT-869 is evident in cellular assays of RTK phosphorylation (IC50=2, PDGFR-β, KDR, and CSF-1R, respectively) and VEGF-stimulated proliferation (IC50=0.2 nmol/l for human endothelial cells) [38]. AMG 706 a novel nicotinamide derivative was identified as a potent, orally bioavailable inhibitor of the VEGFR1/Flt1, VEGFR2/kinase domain receptor/Flk-1, VEGFR3/ Flt4, PDGFR, and Kit receptors in preclinical models. AMG 706 inhibited human endothelial cell proliferation induced by VEGF, but not by basic FGF in vitro, as well as vascular permeability induced by VEGF in mice [39]. 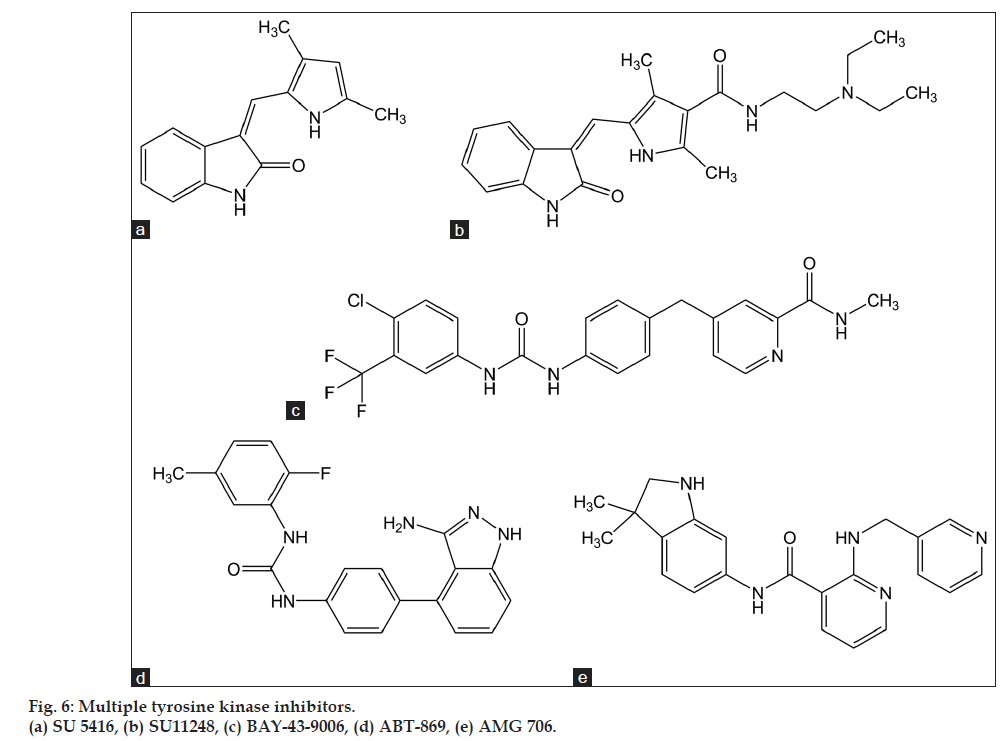 Angiogenesis is an important and necessary phenomenon in tissue growth or in wound healing. However, cancerous cells stimulate the formation of vasculature around itself called as tumour-driven angiogenesis for the purpose of its survival and growth. This tumour-driven angiogenesis is stimulated by the abnormal activation of RTK by interaction of growth factors with the tyrosine kinase receptor. Inhibitors of angiogenesis thus, help in blocking progression, growth and development of the tumour and can be a class of anticancer agents. The antiangiogenic agents have advantages over conventional anticancer therapy like, the therapy does not directly targeting the tumour but inhibits the development of blood vessels and thus, indirectly cytotoxic, development of multikinase inhibitors can result in better antiangiogenic agents. Better results have been observed when used in combination with other anticancer agents. E.g., Use of ZD-6474 (Zactima) with docetaxel for the patients suffering from nonsmall cell lung cancer. Furthermore, these agents are not cytotoxic to normal somatic cells. However, they have also suffered from few disadvantages which includes the inhibition of the initial phase of tumour growth, interference with the wound healing and menstrual cycle, involves huge research cost and the therapy cost is high. Rather than designing the selective inhibitors of RTK, multiple TKIs can be better candidate for antiangiogenic drug discovery. As the possibility of developing resistance due to selective inhibitors will be less and if developed antiangiogenic effect will be due to the inhibition of other RTKs as well.