Tuberculosis is a highly communicable and chronic respiratory disease caused by pathogenic bacterium Mycobacterium tuberculosis. The drug â?? resistant species of Mycobacterium tuberculosis are tough to cure due to its resistant activity toward potential drugs. Available inhibitors of tuberculosis include few antimicrobial fluoroquinolone agents like ciprofloxacin, ofloxacin, and moxifloxacin to treat resistant Mycobacterium strains. Literature study elucidates that macromolecular target namely, HtrA2 of Mycobacterium tuberculosis play a dual role of protease and chaperone. These two activities are dependent on temperature, with low temperatures promoting the chaperone function and high temperatures promoting serine protease activity. Under normal physiological conditions HtrA2 acts as a quality control factor and promotes cell survival. In the present investigation, we screened fluoroquinolone such as ciprofloxacin, moxifloxacin and ofloxacin and their analogues based on better Docking score, absorption, distribution, metabolism and excretion screening and Lipinski’s rule of 5, to find out their efficiency on resistant strain through in silico study. From the results observed, the analogues are suggested to be potent inhibitors of HtrA2 with sufficient scope for further exploration.

The comeback of Mycobacterium tuberculosis with power of multiple drug resistance becomes a severe public health threat and so it has more comparable researches with a synergy between HIV and M. tuberculosis infection [1]. Forty years of research in tuberculosis (TB) drug discovery has failed in this decade due to rise of multiple drug-resistant strains [2]. The statistical growth of multi-drug resistant problems in TB treatment has led to an increase in demand to test new antitubercular drugs which overcomes drug resistance problem. Several approaches have been explored to conquer drug resistance, but limited numbers of successes are reported due to lack of understanding of how resistance emerges in bacteria upon drug treatment. Biological network analyses of the proteins involved are essential for gaining insights into the routes required for emergence of drug resistance. Studies on early bactericidal activity provide a fast and economic way to evaluate the clinical efficacy of potential agents for the treatment of tuberculosis [3]. Due to the destructions caused by M. tuberculosis, there is a need for the development and assessment of new antituberculosis agents that might contribute to trouble-free treatment in patients.

Fluoroquinolones (FQs) show the evidence of potent in vitro and in vivo antimycobacterial activity and there are significant efforts taken to include FQs new front-line and second-line agents [4,5]. The WHO recommends the researchers and doctors to use fluoroquinolone as second-line drugs for the treatment of multiple drug resistance-tuberculosis (MDR-TB). Based on the available literatures on bactericidal activity, FQs like ciprofloxacin (CIP), moxifloxacin (MFX) and ofloxacin (OFX) are approved for clinical studies and are now recommended as part of treatment for MDR-TB.

The success of M. tuberculosis as a pathogen is caused, in part, by its ability to survive in macrophages and establish long-term, persistent infection in the host during periods of control by the cell-mediated immunity. Members of the high temperature requirement A (HtrA) family are envelope-associated serine proteases that perform crucial functions, involving protein quality control in the periplasmic space, acting as both molecular chaperones and proteases [15,16]. Proteases are amongst the numerous factors that may be important for bacterial survival in vivo. HtrA2 is a serine protease and chaperone. At low temperatures it acts as a chaperone, whereas at high temperatures it behaves as a protease. Intriguingly, the protease activity appears to be important in protecting bacteria against heat shock. It is a part of a two operon consisting of MprA-MprB, which is a two component system required by M. tuberculosis for growth in in vivo during the persistent stage of infection [17]. Low oxygen, existence in the granulomatous tissue contributes to the persistence of infection by HtrA2, and its virulence is caused mainly by their role in stress resistance and survival.

HtrA2 protein is one of the aetiologies for mycobacterium infections. Targeting this protein will be helpful in treating the infection caused by M. tuberculosis. Determining the binding structures in the active site of HtrA2 and exploring the interactions for the original drugs and their analogues are essential, to improve the design of second-generation inhibitors. In the present study the fluoroquinolone drugs CIP, MFX, OFX and also their analogues were targeted for HtrA2 through in silico approach to find out its inhibitory activity against HtrA2.

The structure of CIP, MFX and OFX and their analogues were retrieved from PUB_CHEM database by performing substructure screening. The ligands were prepared using LigPrep 2.3 [18] module of the Schrödinger suite [19] using Merck molecular force field. MMFF was used for 2D to 3D conversion of ligand molecules and optimized potential for liquid simulation (OPLS) force field was used for conformation analysis through Confgen [20,21]. LigPrep generated multiple conformations using confgen, and ionisation states were generated for all the compounds by using Epik 2. A single ligand was searched for multiple conformations based on torsional angles [22].

The structure of HtrA2 protein (PDB ID: 2Z9I) was downloaded from the Protein Data Bank and imported and prepared by a multistep process through the protein preparation wizard of Maestro (9.0). It was especially used to obtain the optimised and minimised energy conformation of the protein. Firstly, the bond order in the protein was assigned, Hydrogen atoms were added and the water molecules which did not participate in interactions were removed. Following the above steps of preparation, the protein was subjected for energy minimisation using Schrödinger implementation of OPLS-2005 force field with implicit solvation.

Active site is a pocket pouch present on the protein structure that has the tendency to accept the ligand molecules within it. The Sitemap applies theoretical methods and predicts the most accurate binding site [23]. The OPLS-AA force field generates site points, possible for ligand interaction within the protein. The sitemap gives an idea about positions favourable for a donor, acceptor and hydrophobic group to be present in the receptor. The maps were very useful for analysing the interactions of ligands with the receptor.

Docking studies on LigPrep treated ligands were carried out to predict the binding pocket of 2Z9I using the docking program, Glide [24]. Glide used a series of hierarchical filters to search for possible locations for the ligand in the active site region of the receptor [25]. For the grid-based ligand docking, the receptor grid generation file was used. For protein structure, a grid box of 30×30×30 Å3 with a default inner box (10×10×10 Å3) was centered on the corresponding ligand. Default parameters were used, and no constraints were included. The processes of virtual screening were carried in three phases, docking simulations of varying precisions and computational intensities. All 300 prepared ligands were docked using the high-throughput virtual screening (HTVS) docking protocol which was computationally the least intense process intended for rapid screening of the ligands. Ligands were selected for further successive steps on the basis of the docking score; the cut-off was set as -5.0. 97 ligands selected had a docking score below -5.0 and were docked in the same receptor using the standard precision (SP) docking protocol in which the docking scores cut-off was set to -7.0 and 26 ligands were selected for further steps. Screened ligands (26 compounds) were docked using the extra precision (XP) docking protocol a more powerful and discriminative procedure, that too longer to run than SP docking. After removing the duplicates, top 5 ligands from XP docking were considered for visual inspection.

The QikProp program [26] was used to predict the ADME properties of the analogues. All the analogues were neutralised before being used by QikProp. The neutralizing step was essential, as QikProp was unable to neutralise a structure and, therefore no property will be generated in normal mode. It predicted physicochemical significant descriptors and pharmacokinetically relevant properties. QikProp provided ranges for comparing particular molecule properties with those of 95% of known drugs. It also evaluated the acceptability of analogues based on Lipinski’s rule of 5 [27,28] which was essential to ensure drug-like pharmacokinetic profile while using rational drug design. 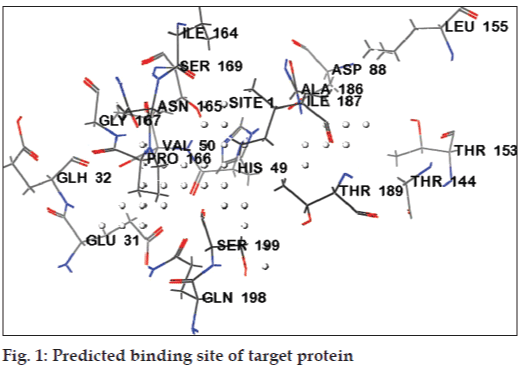 To gain insights into the structural basis for its activity, FQs analogues were docked into the active site of the target protein. A correlation was calculated by Glide score and other docking parameters.

For theoretical prediction of analogues, mainly four parameters were taken for consideration, these included G-score, Glide energy, hydrogen bonds and Emodel. On the basis of these parameters the binding affinity of ligands toward the receptor are discussed here. The docking results are revealed in Table 1. From a total of 300 compounds, best five compounds were selected based on docking results. Higher negative value of G-score indicated enhanced binding affinity of the ligand with the receptor. In this in silico effort, we short-listed the compounds keeping the G-score value of more than -10 as underlying criteria. The preferred ligands PUB_CHEM ID 16043034, 465157, 16095387, 16042854 and 25139637 had a G-score value of -12.156895, -11.410010, -10.602376, -10.526178, and -10.009522, respectively. The G-score values of the above-mentioned three FQs (CIP, MFX and OFX) were comparatively lesser than their analogues with the scoring of -4.802, -3.609 and -3.588.

A number of physical descriptors as well as pharmaceutically relevant properties of 26 fluroquinolone analogues using QikProp are analysed, amongst which significant descriptors are reported and are important for predicting the drug-like properties of molecules. The properties includes H-bond Donor (0.0-6.0), H-Acceptor (2.0-20.0), Predicted water/gas partition coefficient. (QPlogpw) (4.0-45.0), Predicted octanol/water partition coefficient (QPlogPo/w) (–2.0 to 6.5), Predicted aqueous solubility (QPlogS) (–6.5 to 0.5).

The protein ligand interaction plays a significant role in structural based drug designing. In this approach, H-bonding, Glide energy score, docking results and ADME properties are kept as a support for our work through which, we predicted that fluoroquinolone analogues of MFX and OFX possess better antibacterial activity than the CIP by having good binding affinity with target protein and it could be used as potential drugs for second-generation drug development than the already existing inhibitors of M. tuberculosis. This study further requires experimental validation to establish these said analogues as more potent drugs for the treatment.

The financial support is extended by the Biotechnology Information System (BTIS), Department of Biotechnology (DBT), Ministry of Science and Technology, Government of India, India is acknowledged.