The impact of gastric diseases on human health, such as chronic gastritis, duodenal, gastric ulceration and adenocarcinoma, remains a big issue deserving worldwide attention. Oxidative stress is the major gastric pathologic feature and plays an essential role in the multiple progressions of gastric diseases [1]. The excessive generation of reactive oxygen species (ROS) is associated with cell death and generation of ROS is associated with cell death an keep cellular homeostasis, excessive ROS can cause damage to lipids and proteins as well as single stranded DNA breaks [2] and gastric epithelium is exposed to higher ROS lever than other tissues [3,4]. Therefore, it is necessary for cells to effectively counteract ROS generation by triggering their own defensive mechanisms with the help of antioxidants. Hemeoxygenase-1 (HO-1) is a highly inducible, stress-responsive protein (also called heat shock protein 32), which catalyzes the first and ratelimiting step in heme degradation, a potent oxidant [5]. Indeed, ample evidence currently supports the notion that HO-1 serves to provide potent cytoprotective effects in many in vitro and in vivo models of oxidantinduced cellular and tissue injury. The NADPHquinone oxidoreductase 1 (NQO1) is a predominantly cytosolic enzyme which provides cells with multiple layers of protection against oxidative stress, including the direct detoxification of highly reactive quinones [6,7].

Polygonum multiflorum, a traditional Chinese medicinal herb, has been widely used as a tonic and antiaging agent [8]. Tetrahydroxystilbene glucoside (TSG) is an active component extracted from P. multiflorum. Recently, TSG has received a great deal of attention owing to its biological properties, including antioxidative [9], antiatherosclerotic [10] and antiinflammatory [11] activities. However, whether TSG has a protective activity against oxidative stress related injury to gastric epithelial cells remains unknown. TSG is the water-soluble active component. Therefore, TSG may well penetrate the cells with free diffusion. Some reports found that TSG was mainly absorbed in the stomach, but the absorption rate was reduced. So its absorption in the stomach may be by active transport. Lv et al. [12] discovered that TSG was rapidly absorbed into the body fluids and widely distributed throughout the body, with great efficiency of utility, followed by quick elimination. Sun et al. [13] preliminarily determined that the metabolites of TSG were glucuronic acid combination. Wang et al. [14] found that bile excretion might be the main drainage way of TSG and its metabolites.

Inhibition of cell proliferation by TSG was measured by the MTT assay. GES-1 cells and SGC-7901 cells were plated in 96-well plates at a density of 4000 cells per well. After incubation with medium for 24 h, cells were incubated with indicated concentrations of TSG for 24 h. Then, MTT was added to cell cultures at a final concentration of 5 mg/ml for 4 h at 37°, after that the media were carefully removed. The adherent cells were solubilized with 100 μl of DMSO. Absorbance was measured at 570 nm using a microplate reader (BIO-RAD, California, USA).

Generation of intracellular ROS was detected using the non-fluorescent probe DCFH-DA. DCFH-DA, a nonfluorescent substance, passively diffuses into cells and is deacetylated by esterases to form non-fluorescent DCFH. In the presence of ROS, DCFH reacts with ROS to form the fluorescent product DCF, which is trapped inside the cell [12]. The cells were treated with H2O2 for 4 h after being pretreated with or without TSG for 24 h. Then cells were harvested and incubated with 5 μM DCFH-DA at 37° for 30 min and analyzed by flow cytometry (Millipore, Bedford, USA).

Table 1: The List of Gene Primers Used in Qrt-Pcr Analysis 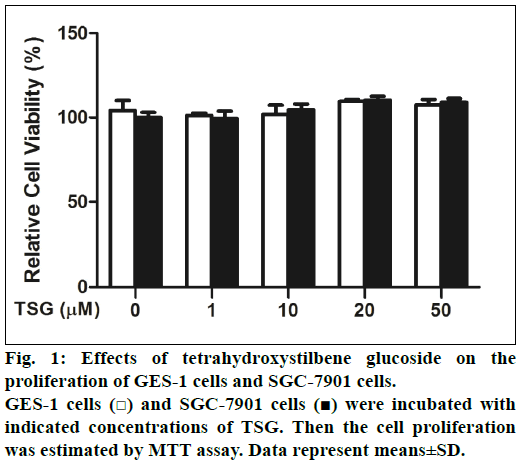 To examine the cytotoxic potential of H2O2-induced cell damage, we selected the tumor cells (SGC-7901 cells) with high reproduction and easy accessibility. SGC-7901 cells were treated with increasing concentration of H2O2 (0-800 μM) for 4 h, the cell viability was significantly decreased to 42.2±0.62%. The results shown in fig. 2A demonstrated that IC50 valued was 510±4.95 μM. Therefore we selected the concentration of 500 μM H2O2 for the following experiment. As shown in fig. 2B, pretreatment with the indicated concentration of TSG reduced H2O2-induced cell damage.

Fig. 2: Effects of tetrahydroxystilbene glucoside on the H2O2-indued cell cytotoxicity in GES-1 cells and SGC-7901 cells.
A SGC-7901 cells (▬●▬) were incubated with indicated concentrations of H2O2 for 4 h, and cell proliferation was estimated by MTT assay. B SGC-7901 cells (▬■▬) and GES 1 cells (▬●▬) were pretreated with the indicated concentration of TSG (0, 5 and 10 μM) for 24 h or not, and followed by H2O2 (500 μM) administration. The cells were further cultured for 4 h and cell viability was tested. Data represent means±SD.

After that, we examined the effect of TSG on ROS generation in GES-1 cells and SGC-7901 cells. Generation of ROS in cells was measured using fluorescence assay with DCFH-DA probe by flow cytometry. The results demonstrated that TSG could dose-dependently attenuate H2O2-induced ROS production compared with the H2O2 treatment alone (figs. 3A and 3B).

Fig. 3: Effects of tetrahydroxystilbene glucoside on the H2O2-indued ROS production in GES-1 cells and SGC-7901 cells.
Cells were pretreated with the indicated concentrations of TSG (0, 5 and 10 μM) for 24 h or not, and followed by H2O2 (500 μM) administration. A and B Intracellular ROS was evaluated and the data were quantified. Data represent means±SD. *P<0.05 vs. Control (0 μM); #P<0.05 compared to H2O2 treatment group. □ Control; ■ H2O2.

To explore whether TSG leads to the expression of antioxidant enzymes, we examined the gene levels of HO-1 and NQO1. qRT-PCR analysis was conducted to confirm the induction of antioxidant gene. Treatment of cells with TSG (0, 5 and 10 μM) for 24 h showed that the compound induced the expression of NQO1 and HO-1 genes in a concentration-dependent manner (figs. 4A and 4B).

We examined the gene levels of HO-1 and NQO1 after the negative control H2O2 treatment. The cells treated with 500 μM H2O2 for 4 h showed that the expression of NQO1 and HO-1 genes were reduced. The elevated ROS is an essential factor in the onset and development of gastric epithelial injury and various gastric disorders. Cells possess a plenty of cytoprotective enzymes, which protect living cells from oxidative stressinduced damage. However, exogenous administration of antioxidants is also an important strategy to protect cells against oxidative damage. TSG has been reported to counteract oxidative stress in different cell lines [9,15,16]. In this study, we first demonstrated that TSG could protect gastric epithelial GES-1 cells from oxidative damage. It is further found that TSG protected oxidative damages through inhibition of oxidative stress and up-regulation the expression of antioxidant enzymes HO-1 and NQO1.

We also found that TSG exerted cytoprotective effect against H2O2-induced cell death in GES-1 cells, and also played a protective role in gastric cancer cells (SGC-7901), although the protection on SGC-7901 cells was not strong (fig. 5). These results indicated that TSG protected gastric epithelial cells from oxidative damage and at the same time, might reduce the effects of other antitumor drugs.

In summary, TSG presents cytoprotective effect against oxidative damage and may be further development as a therapeutic agent against gastric diseases. It should be mentioned that the detail molecular mechanisms for antioxidant effect of TSG are important aspects to study in the future. Furthermore, this study aimed to make available information on the prevention of TSG against hydrogen peroxide-induced cell death. It would be interest to test the treatment of TSG. We considered performing these experiments in our future studies.

The authors have declared that there is no conflict of interest.