The effect of different shapes and size solids and varying solid content added to semisolid base containing Eucerin® and liquid paraffin on the spreadability of obtained pastes were evaluated. Zinc oxide, salicylic acid, acetyl salicylic acid, and sodium chloride) were used as model solids for different shape and size. The samples were tested by extensometer, and the mean values of spread surface for at least three samples were plotted against the exerted weights on the extensometer's upper plate. The results show that, the semisolid spreadability decreased significantly ( P <0.05) as the powder level in the paste increased and decreased by decreasing the particle size of the solids. The results also illustrate that the particle shapes significantly ( P <0.05) affect semisolid spreadability.

Pastes (solid particles dispersed in semisolid) are one of the pharmaceutical dosage forms in which the dose uniformity and thus the efficacy of drug products either local or systematic, depend on the spreadability of the paste. However, the particle size of the drug and its shape along with its content in the paste will affect the spreadability of the paste. Better spreading paste will provide more contact area, witch effects the penetration and absorption. Del Pozo and Sune have used an extensometer to study spreadability of semisolid [1], and the rheological properties of semisolid food were studied by Mehmet and Gunasekaran by means of lubricated parallel plate’s technique under perfect slip condition [2]. The effect of water and air bobble content on the rheological properties of black gram batter was investigated by Swami and coworkers showing that the spreadability of the batter decreased linearly with increase in apparent viscosity of the batter [3]. Dybowski and Fehr using Del Pozo method studied the spreadability of zinc oxide paste preparations and observed a negative logarithmic correlation between paste viscosity and its spreadability [4]. The effect of various types of Span® on the physical properties of ointments was investigated by Eros and Hunyadvari [5]. Their results indicated that the solid emulsifiers increased the spreadability and adhesive strength of the ointment, while the liquid emulsifiers reduced these properties, which relates to the length of the carbon chain of the fatty acid moiety of the Span [5].

Zinc oxide, salicylic acid, acetyl salicylic acid, and sodium chloride were used as model solid powders to represent different shape models. Different mean particle sizes were separated by sieve and were added at varying concentrations (10, 20, 30, and 40%) to a semisolid base, which was prepared by mixing Eucerin and liquid paraffin at 85 to 15 ratios in 40°C and stirred until reaching to the room temperature. The known quantity of each powder was then mixed with the base and stirred for 7 minutes. The spreadability of each sample was evaluated immediately in triplicate by an extensometer [1,6], which consists of two methylmetacrylate plates. The lower plate holds the sample, while the upper plate, which weighs 42 g exerts forces to the sample in the lower plate. One gram of paste was placed on the lower plate and the upper plate was place on the top of the sample. Varying forces were generated by adding known weights on the upper plate. Each sample was tested at least three times at constant temperature and exerted weight and the mean values of spread surface area on the lower plate were calculated.

Plotting upper plate weight against spread surface area of three identical samples was used to verify the accuracy of the method. One way analysis of variance (ANOVA) indicated that there was no significant differences (p>0.05) in spread surface area that produced under the same condition. Changes in solid powder contents, particle size, and part shape resulted in significant changes in the spreadability of initial semisolid. The results, presented in figs. 1-3 show that the spreadability of initial semisolid decreases significantly (p<0.05) as the solid content increases, regardless of the size and shape of the particles, which could be attributed to the increased viscosity due to high particle content of the base and increased particle-particle interactions as shown by Swami and coworkers [3]. 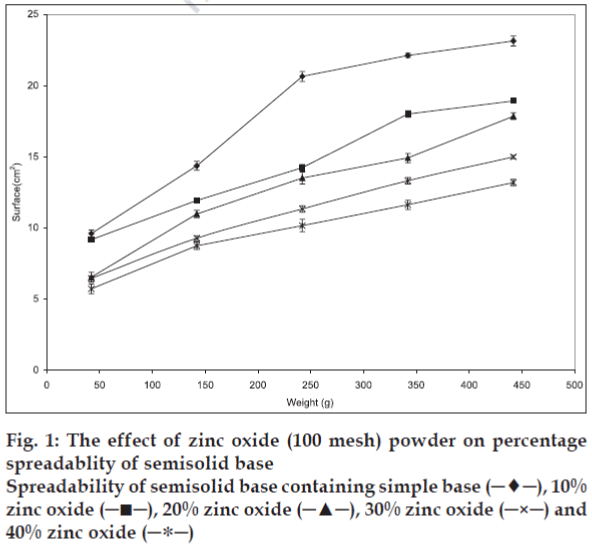 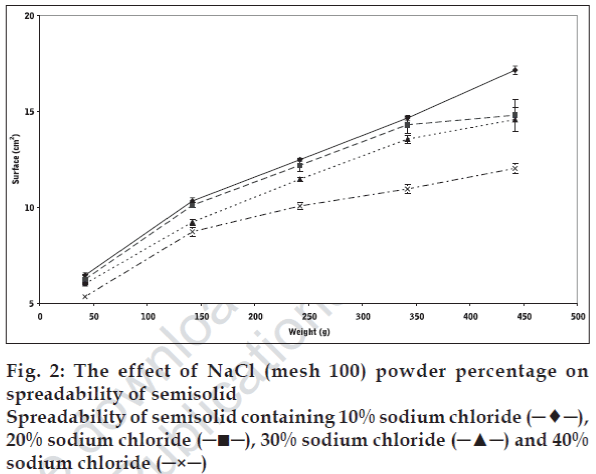 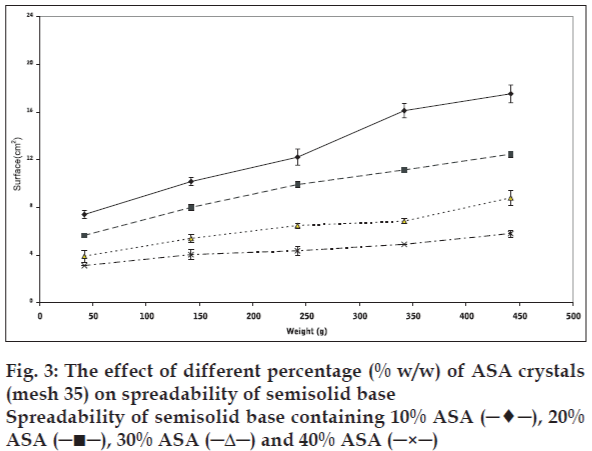 The effect of particle size on the spreadability of the produced paste was evaluated after preparing the samples with different particle size at the same solid content. The semisolid spreadability decreased significantly (p<0.05) as the particle size of the added particles was decreased (fig. 4). This effect may be explained by an increase in the particleparticle interactions due to high particle population per unit weight of semisolid, which restricts their movement and causes reduction in spreadability. On the other hand higher spreading was observed upon agglomeration of particles due to reduction in particle-particle interaction. Considering that other factors e.g., interfacial tension (particle-semisolid) and particle intrinsic density, could also influence the spreading process, both spherical and needle-like acetyl salicylic acid particles were used to study the influence of particle shape alone on spreadability. Incorporation of different weight percent of two shapes of acetyl salicylic acid in the semisolid base showed that the semisolid spreadability decreases by increasing the amount of powder from 10 to 40% w/w for both shapes. This decrease, as explained before, is related to increase in the number of particles per unit weight, thus increase on the particle-particle and particle-base interactions. The data obtained also illustrate that the incorporation of needle-like crystals in higher powder content (30 and 40% w/w) is resulted in more decrease in spreadability than spherical particle in the same concentration. However, there was no significant difference between semisolid spreadability was observed for both particle shapes at 20% level, in contrast to the 10% powder level preparation. The spherical particle shows significantly more decrease in the semisolid spreadability compared to the needle-like shape particles (P<0.05). In this case, considering other factors, e.g., similar nature, size, and level of the added power to semisolid, the particle-particle interaction plays a major role in influencing the spreadability. This interaction is dependent on particle shape, setting method, and position of each particle related to other particles (fig. 7). With respect to particle shape, the spherical or cubical particles show comparatively constant interaction with less variation compared to needle-like particles, due to their symmetry. Needle-like crystals may arrange differently, hence particle-particle interaction can either increase or decrease according to their arrangement. They show less interaction in low concentrations (10%) since they have sufficient space to maneuver and rearrange themselves, however, increasing powder level in semisolid base from 10% to 40%, the particles are squeezed together and show strong interactions in new setting than spherical particles with similar powder level.