The antioxidant activity and total phenolic content of Morinda tinctoria leaves was evaluated. The successively extracted leaves of Morinda tinctoria using various solvents was analyzed for their total phenolic content. The extracts were subjected to column chromatography for the isolation of bioactive molecules. In vitro antioxidant activity was evaluated by employing different assays, including 2,2-diphenyl-1-picrylhydrazyl, nitric oxide scavenging assay and phosphomolybdenum reducing power assay. The 2,2-diphenyl-1-picrylhydrazyl radical scavenging efficacy of hexane extract is significant at higher concentration (500 μg/ml- 91.2±0.05%) and the efficacy at lower concentration is more significant for ethyl acetate extract (100 μg/ml - 65.1±0.05%). The total phenolic content was highest in methanol extract (5.30±0.011 μg/mg). Cynarin, a hydroxy cinnamic acid was isolated from chloroform extract; oleuropein, a polyphenolic iridoid was isolated from methanol extract. The results obtained suggeted that Morinda tinctoria leaf extracts possessed antioxidant properties and might offer protection from free radicals. Two compounds, cynarin and oleuropein were reported for the first time from Morinda tinctoria leaves.

Excessive generation of reactive oxygen species (ROS) is involved in structural alterations of cellular molecules leading to cytotoxicity and cell death [1] . Plant extracts and phytochemical constituents play an important role in the prevention of many diseases and are recognized as natural antioxidants. Phenolic compounds found in vegetables, fruits or medicinal plants are known for their antioxidant potential and their role in prevention of human diseases [2]. Morinda tinctoria (Rubiaceae) is distinguished for its traditional use, phytochemical profiles and therapeutic potential. It is locally known as “Togaru” and commonly known as Indian mulberry or aal or nunaa in India. It is a small tree with immense medicinal properties. The plant is well known for its therapeutic use in traditional systems of medicine like ayurveda and siddha. Literature survey reveals that traditionally the leaf juice is given orally to children before food for easy digestion [3]. The expressed juice of leaves is externally applied to gout to relieve pain. The leaves are administered internally as a tonic and febrifuge [4]. The n‑hexane, dichloromethane and methanol extracts of the leaves were shown to possess antibacterial and antifungal activities [5]. The petroleum ether extract showed anticonvulsant activity [6]. Anticonvulsant, analgesic, antiinflammatory, cytoprotective effect and antimicrobial activity of Morinda tinctoria leaves has been reported [7]. The ashes of Morinda tinctoria leaves are also reported to act as biosorbents in controlling ammonia pollution in waste water [8]. There are very few reports on the chemical constituents of the leaves of Morinda tinctoria. The objective of the present work was to investigate the total phenolic content, chemical constituents and antioxidant activity of the leaf extracts of the plant. The isolated compounds were identified as cynarin and oleuropein (fig. 1) their structures were determined based on the observed spectroscopic (1H‑NMR, 13C‑NMR and IR) data and reported data in literature. This is the first report for the occurrence of cynarin and oleuropein from Morinda tinctoria. 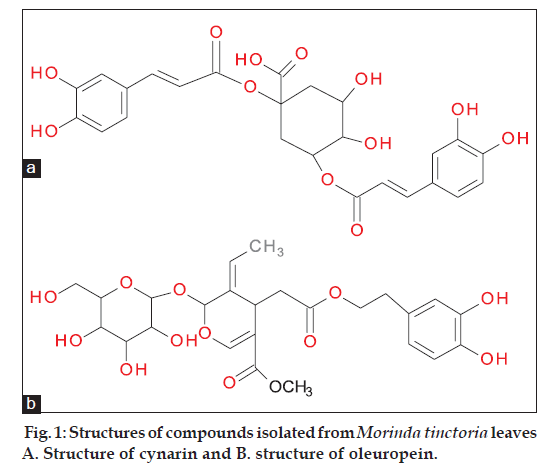 Fig 1: Structures of compounds isolated from Morinda tinctoria leaves A. Structure of cynarin and B. structure of oleuropein.

Fresh leaves of Morinda tinctoria were collected from GITAM University campus, Visakhapatnam, India and a voucher specimen has been deposited at the Botany Department herbarium, Andhra University, India (Herbarium no. AU‑B.D.H‑ 21106). All chemicals and solvents used in the present study were of analytical reagent grade and were purchased from S. D. Fine Chem, Himedia and Qualigens India.

The leaves were washed under tap water and shade dried. The dried leaves were coarsely powdered and stored at 20o until further use. One kilogram powder was extracted with 2000 ml of n‑hexane, chloroform, ethyl acetate and methanol successively using a Soxhlet extractor for 48 h each. The extracts were then distilled using a rotary evaporator and evaporated to dryness and weighed accurately. The completely dried extracts weighed, 15, 33, 20 and 43.6 g each for hexane, chloroform, ethyl acetate and methanol extracts, respectively.

About 10 g of the extract was defatted using n‑hexane for 1 h for the removal of fatty materials. The extract was then dried and dissolved in chloroform (50 ml) and mixed with silica gel mesh 60‑120 and dried, the dried material was used for column. About 500 g of silica mesh 60‑120 (column chromatography grade) was kept in oven for 1 h at 105° for activation. It was cooled in desiccators for 1 h. The column was packed up to 2/3 portion with activated silica by wet packing procedure. The column was then eluted with n‑hexane, hexane:chloroform and chloroform:methanol in different ratios. Every 30 ml fraction was collected in different boiling tubes and each tube was performed for TLC with mobile phase hexane:chloroform:methanol (5.5:2:1) so as to analyze the purity of the isolated fractions. Fractions with same bands were clubbed together. Six similar fractions were collected. Cynarin was eluted with chloroform: methanol (6:4) as solvent system. The dried fraction was further purified by preparative TLC and characterized by IR, NMR (1H and 13C) and LC‑MS.

About 10 g of dried methanol extract was defatted with n‑hexane for the removal of fatty materials. The extract was then dried adsorbed with silica gel and used for column chromatography. The column was packed with silica gel (60‑120 mesh) by wet packing method and then eluted with chloroform:methanol in different ratios and the isolated fractions were analyzed on TLC with mobile phase n-hexane:chloroform:methanol (5.5:2:1). Similar fractions were combined and dried. Oleuropein was eluted with chloroform:methanol (6:4) solvent system and further purified by preparative TLC. The purified compound was characterized by IR, 1H NMR, 13C NMR and LC‑MS.

The free radical scavenging activity of the extracts was measured in terms of hydrogen donating or radical scavenging ability using the stable radical DPPH (2,2‑diphenyl‑1‑picrylhydrazyl). 0.1 mM solution of DPPH in ethanol was prepared and 1.0 ml of this solution was added to 3.0 ml of extract solution in water at different concentrations (100‑500 μg/ml). The absorbance measured after thirty min is 517 nm. Ascorbic acid was used as a standard. Lower absorbance of the reaction mixture indicates higher free radical scavenging activity. The efficacy to scavenge the DPPH radical was calculated from the formula, DPPH scavenged (%) = (Acontrol‑Atest/Acontrol)×100, where Acontrol is the absorbance of the control, Atest is the absorbance in the presence of the extracts.

Nitric oxide radical inhibition is estimated by the use of Griess Illosvoy reaction [9]. Nitric oxide generated from sodium nitroprusside in aqueous solution at physiological pH interacts with oxygen to produce nitrite ions, which were measured by the method of Garrat. Sodium nitroprusside (5 mM) in phosphate‑buffered saline (PBS) was mixed with 3.0 ml of different concentrations (10‑100 μg/ml) of the extracts dissolved in the suitable solvent systems and incubated at 25° for 150 min. After incubation, 0.5 ml of the reaction mixture were reacted with Griess reagent and allowed to stand for 30 min. The absorbance of the chromophore formed during the diazotization of nitrite with sulphanilamide and subsequent coupling with naphthyl ethylenediamine was read at 546 nm. The percent scavenging of nitric oxide is calculated using the formula, NO scavenged (%) = (Acontrol‑Atest/Acontrol)×100.

The reducing power of leaf extracts was determined according to the method of Oyaizu [10]. Different concentrations of plant extracts (25‑200 μg/ml) in 1 ml of methanol were mixed with phosphate buffer (2.5 ml, 0.2 M, pH 6.6) and potassium ferrocyanide (2.5 ml, 1%). The mixture was incubated at 50° for 20 min. A portion of trichloro acetic acid (10%, 2.5 ml) was added to the mixture and then centrifuged at 3000 rpm for 10 min. The upper layer of the solution (2.5 ml) was mixed with distilled water (2.5 ml) and ferric chloride (0.5 ml, 0.1%) and the absorbance was measured at 700 nm and compared with standard. Increased absorbance of the reaction mixture indicates increased reducing power.

In the present investigation different solvent extracts of Morinda tinctoria leaves were examined for their total phenolic content and free radical scavenging activity. The total phenolic content is presented in Table 1. The highest phenolic content was obtained in methanol followed by chloroform, ethyl acetate and hexane. The antioxidant assay was performed in the whole extract as a bio active individual component can change its properties in the presence of other compounds due to addition and synergistic effects of phytochemicals present in the extract. In the present work DPPH scavenging efficacy, nitric oxide radical scavenging efficacy and reducing power assay were successfully used for the evaluation of free radical scavenging activity (antioxidant activity) of the crude extract derived from Morinda tinctoria leaves. Two compounds cynarin and oleuropein were isolated from the chloroform and methanol extracts.

Phenolic content was expressed as in μgs of gallic acid equivalents. Each value is the mean±SD of three determinations

The presence of phenolic compounds like flavonoids and terpenoids in the leaf extracts of Morinda tinctoria are likely to be responsible for the free radical scavenging activity. Phenolic compounds and flavonoids have been reported to be associated with antioxidative action in biological systems, acting as scavengers of singlet oxygen and free radicals [12,13].

The total phenolic content of Morinda tinctoria leaf extracts is given in Table 1. All determinations were performed in triplicates. Results are expressed as gallic acid equivalents (GAE). It was noted that the methanol, chloroform and ethylacetate extracts were found to have higher total phenolic content than hexane extract. This may be attributed due to flavonoids and polyphenolic compounds present in these extracts of Morinda tinctoria.

The DPPH radical scavenging activity of Morinda tinctoria leaf extracts is given in Table 2. This activity was increased by increasing the concentration of the sample extract. DPPH antioxidant assay is based on the ability of DPPH, a stable free radical, to decolorize in the presence of antioxidants. The DPPH radical contains an odd electron, which is responsible for the absorbance at 517 nm and also for a visible deep purple colour. When DPPH accepts an electron donated by an antioxidant compound, the DPPH is decolorized, which can be quantitatively measured from the changes in absorbance. The IC50 values of the extracts are hexane extract ‑ 100 μg/ ml; ethyl acetate extract ‑ 80 μg/ml; chloroform extract ‑ 90 μg/ml and methanol extract ‑ 95 μg/ ml. The IC50 value of ethyl acetate extract was more significant followed by chloroform methanol and hexane. But at higher concentrations the hexane extract has shown significant percentage inhibition of DPPH.

The nitric oxide generated from sodium nitroprusside reacts with oxygen to form nitrite. The extract inhibits nitrite formation by competing with oxygen to react with nitric oxide directly and also to inhibit its synthesis. The nitric oxide radical scavenging assay of Morinda tinctoria leaf extracts was given in Table 3. The radical scavenging activity increased as the absorbance decreased. The percentage of inhibition of different extracts at maximum concentration of 100 μg/ml is, hexane extract‑13.9±0.003%; ethyl acetate extract‑ 13.7±0.006%; chloroform extract‑ 10.8±0.004% and methanol extract‑ 15.4±0.024%. The nitric oxide scavenging activity of methanol extract was higher than the other three extracts.

The reducing properties are generally associated with the presence of reductones which have been shown to exert antioxidant action by breaking the free radical chain by donating a hydrogen atom. Reducing power of Morinda tinctoria leaf extracts was potent and the power of the extract was increased with quantity of sample. For the measurements of the reductive ability, the transformation of Fe3+ to Fe2+ was investigated in extract as described by Oyaizu et al [11]. The reducing power was increased with increasing the concentration of extract. The absorbance values of the increased concentration of the extracts were given in Table 4. The absorbance of different extracts at 700 nm and 200 μg/ml were, hexane, 0.565±0.07; ethyl acetate, 0.611±0.02; chloroform, 0.608±0.042 and methanol, 0.59±0.056, which were almost similar indicating that compounds containing reducing properties were present in all these extracts.

The ethyl acetate and methanol extracts of Morinda tinctoria possesses potent antioxidant substances which may be responsible for its biological activity. The total phenolic content is higher in chloroform and methanol extracts. Two compounds cynarin and oleuropein were isolated for the first time from the new source. The above results give scientific basis for the traditional use of Morinda tinctoria as potent antioxidant under oxidative stress such as inflammation, aging, mutagenicity and carcinogenicity. The presence of bioactive compounds in all the four extracts is responsible for their observed antioxidant activity.