A. Kowalczyk*, M. Ruszkiewicz and I. Biskup

The total phenolic content and antioxidant capacity of three apple ciders produced in Poland were examined. The total phenolic content was determined by the Folin-Ciocalteau method and results were expressed in gallic acid equivalents with range from 0.21±0.003 to 0.30±0.004 mg/ml and Trolox equivalents ranging 0.88±0.012 to 1.24±0.015 mg/ml. The antioxidant activity was estimated by two methods: 2,2-diphenyl-1-picrylhydrazyl radical scavenging assay with results expressed as EC50(ml/assay) and 2,2'-azino-bis(3-ethylbenzothiazoline-6-sulfonic acid method with results expressed as Trolox equivalent antioxidant capacity. The antioxidant properties of tested ciders were correlated with total phenolic content. Additionally, the correlation between 2,2'-azino-bis(3-ethylbenzothiazoline-6-sulfonic acid and 2,2-diphenyl-1-picrylhydrazyl radical scavenging methods was estimated.

Natural phenolic compounds are widely distributed in plants and are the main contributors to the antioxidant activities of food [1]. Many disorders, i.e. cancer, Parkinson’s and Alzheimer’s diseases, atherosclerosis or heart failure are connected with oxidative stress. Therefore the increasing interest in elucidating the antioxidant activity of different natural compounds in food and beverages is justified [2,3]. The antioxidant capacity of beverages can be examined by various methods based on different mechanism of reaction. The most popular methods for measurement of antioxidant capacity of food products are those involving stable radicals such as 2,2-diphenyl-1-picrylhydrazyl (DPPH) and 2,2’-azino-bis(3-ethylbenzothiazoline-6-sulfonic acid (ABTS) [4]. Ciders have recently become object of great interest because of their antioxidant properties owe to their phenolics content [5-8] and their putative health-promoting effects [9,10]. Cider is possibly one of the oldest alcoholic beverage made from apple juice. It is produced in various countries around the world but is the most popular in i.e. Great Britain, France, Ireland, Spain, Denmark, Finland, Netherlands, Sweden, Germany and Belgium. Poland is not recognizable as a cider manufacturer even though it is one of the biggest apple producer in Europe with an annual production of 2.5 million tons [11]. From several years Polish local producers have started making cider according to the standards obligatory in European Union ountries. Only one Polish cider named “Jablecznik trzebnicki” has been registered and certificated as a Polish Traditional Product by the Polish Ministry of Agriculture and Rural Development [12]. These products have not been analyzed according to their antioxidant properties so far. The aim of this study was to evaluate the antioxidant activity of traditional Polish ciders “Jablecznik trzebnicki” in relation to their total phenolic content estimated by the Folin-Ciocalteau method.

The antioxidant activity was determined by ABTS and DPPH assays. Three apple ciders- A, B, C differed from each other by the batch number produced by Henryk Nowakowski, Trzebnica (Poland) were analyzed. All products were obtained by the fermentation of the juices of mixed autumnal apples i.e. Idared, Jonagold, Szampion without adding yeasts. Organic solvents and reagents were of analytical grade. Water was glass-distilled. Methanol (MeOH) was obtained from Merck (Germany), Folin-Ciocalteu (F-C) reagent was from Polskie Odczynniki Chemiczne (POCH). DPPH (2,2’-diphenyl-β-picrylhydrazyl), ABTS (2.2’-azinobis(3-ethylbenzothiazoline-6-sulfonic acid) diammonium salt) and potassium persulfate (dipotassium peroxdisulfate) were from Sigma- Aldrich. Gallic acid was purchased from Koch-Light Laboratories, UK, and Trolox (6-hydroxy-2, 5, 7, 8-tetramethychroman- 2-carboxylic acid) from Hoffman-La Roche. Total phenolic content was determined spectrophotometrically according to the method of Singleton and Rossi [13]. The diluted beverages (250 μl) were added to tubes and then, 250 μl F-C reagent, 500 μl of saturated sodium carbonate and 4 ml of distilled water were added immediately. Samples were vortexed and incubated for 30 min. at room temperature in the darkness. After 20 min incubation, the samples were centrifuged for 5 min at 4000 rpm and supernatants were used for spectrophotometric determination at 725 nm. Gallic acid and Trolox were used as standards and the results were expressed as GAE (gallic acid equivalents) and Trolox equivalents. The experimental method of DPPH radical - scavenging assay followed that of Brand-Williams [14] and Karamać [15]. A methanol solution of DPPH (concentration 0.25 mg/ml) was prepared 2 h prior the analysis and kept away from light at room temperature. Appropriate amounts of diluted samples of each beverage (in MeOH) were added to tubes and filled with methanol. 0.25 ml of DPPH solution was added to all tubes, vortexed and left for 20 min in a dark place before taking the absorbance at 517 nm. Methanol was used as a blank solution. Experiments of ABTS scavenging assay were conducted according to Re and co-workers [16] with small modifications. Trolox (2.5 mM) was prepared in methanol as a stock standard. Working solutions were prepared daily on the dilution with methanol. ABTS and potassium persulfate were dissolved in distilled water to a final concentration: 7 mM and 2.45 mM, respectively. These two solutions were mixed and kept in the dark at room temperature for 16 h before use. For the study of phenolic compounds, the ABTS radical solution was diluted with distilled water to an absorbance of 0.700 at 734 nm. Twenty microlitre μl of diluted samples of the beverages (in MeOH) or Trolox standards (final concentration 0.2–1.757 μmol/ml) were added to 2 ml diluted ABTS solution and the absorbance reading was taken after mixing and 6 min incubation at room temperature at 734nm. Distilled water was used as blank solution. The results were expressed as TEAC (Trolox equivalent antioxidant capacity). All data were the average of triplicate analyses. Mean values and standard deviations (SD) of all results have been determined. Statistical and correlation analyses of antioxidant activity was carried out by using Microsoft EXCEL program. The total phenolic content (TPC) was determined by the Folin-Ciocalteau method. Results were expressed in gallic acid equivalents (GAE) and Trolox equivalents.

Cider B had the highest phenolic content – 0.3±0.004 GAE and 1.24±0.015 Trolox (mg/ml). Slightly lower concentration had cider C – 0.28±0.002 GAE and 1.15±0.009 Trolox (mg/ml) and the lowest content was estimated for cider A – 0.21±0.003 GAE and 0.88±0.012 (mg/ml). DPPH and ABTS assays were performed to determine the antioxidant activity of ciders. Results from DPPH radical scavenging assay were expressed as EC50 (ml/assay). EC50 was calculated from percent of radical scavenging versus concentration curves of ciders. The order for antioxidant activity was cider B> cider C> cider A with following values 0.07, 0.08 and 0.12 ml/assay. It means that cider B seems to be a little bit stronger antioxidant than others in this test. Additionally, the antioxidant performance of examined ciders is depicted in fig. 1. The second method used for antioxidant estimation of analyzed ciders was ABTS assay with results expressed as TEAC (Table 1). According to this assay, the best antioxidant properties of all the tested beverages had cider B. The lowest antioxidant properties were obtained for cider A. However, the values are similar and the differences are not much significant. The antioxidant properties of tested ciders were correlated with total phenolic content (figs. 2 and 3). Positive correlations between antioxidant activity estimated in DPPH method and phenolic content (R2=0.998) and between antioxidant activity evaluated in ABTS method and phenol content (R2=0.973) confirmed that the antioxidant capacity of the analyzed products was for the most part due to their polyphenols. In addition, the correlation between ABTS and DPPH methods was estimated. ABTS and DPPH radical scavenging activities correlated in strong manner which confirmed that both methods are complementary to each other (R2=0.986). The antioxidant capacity of ciders can be accurately determined by DPPH and ABTS assays. Both methods are fast, simple and useful. Optimized proper reaction time and reagent to analyte excess are crucial [5]. Total phenolic composition determined on the Folin-Ciocalteau assay was useful to predict the antioxidant activity of ciders. The differences of the antioxidant activities between all three ciders can be due to varieties of apples used in their production. Also this can be the reason of their lower total phenolic content in comparison to Spanish products published by Picinelli Lobo et al. [5]. Our study is the first report about antioxidant properties of traditionally Polish cider. The obtained results showed that among ciders from other European countries, Polish products have lower quantity of phenolic compounds. But due to their antioxidant activity they can have the beneficial effects on consumers’ health. Fig 1: Concentration curves of ciders in the DPPH assay measured by changes of absorbance at 517 nm. 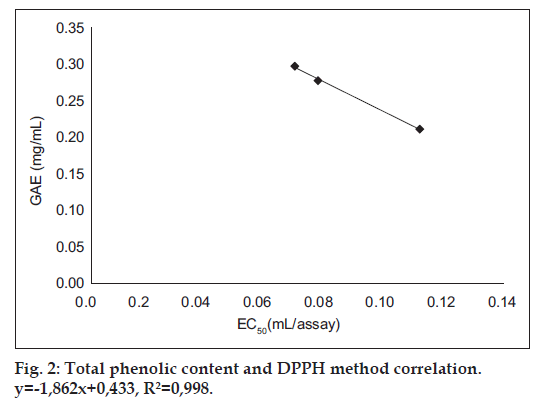