Transdermal Delivery of Venlafaxine Hydrochloride: The Effects of Enhancers on Permeation Across Pig Ear Skin

Venlafaxine representing a new class of antidepressants is a potent serotonin/ norepinephrine reuptake inhibitor. Transdermal delivery of venlafaxine hydrochloride (VHCl) may result in proper patient compliance by reducing the incidence of the undesirable GI problems generally associated with its plural oral dosing. The present study is an attempt to investigate the improvement of the transdermal flux of the hydrophilic VHCl by certain permeation enhancers viz. glycerin, urea, propylene glycol and mixture of propylene glycol and ethanol across pig ear skin. The cumulative drug release was the highest from the formulation F5 consisting of the mixture of propylene glycol and ethanol in sodium alginate gel with a load of 25% w/w VHCl with 96% permeation enhancement. The steady state flux observed with F5 was 0.203 mg cm−2 hr and an area of 15.27 cm2 would suffice to arrive at a required therapeutic concentration of VHCl in the blood.

Venlafaxine hydrochloride (VHCl) is a novel, non-tricyclic antidepressant. It is used in major depressive disorders, generalized anxiety disorders (GAD), and social anxiety (social phobia) of panic disorders [1]. Venlafaxine has also been used to treat pain syndromes including, but not limited to, pain associated with major depression or an anxiety disorder, peripheral neuropathic pain, chronic pain, cancer related pain and fibromyalgia [2]. VHCl is available as tablets of strengths 25 mg, 37.5 mg, 50 mg, 75 mg, 100 mg and 150 mg [3]. In therapeutic dosing with VHCl tablets, rapid dissolution results in rapid increase in plasma levels of active compounds shortly after administration followed by a decrease in blood plasma levels over several hours as the active compound is eliminated or metabolized, until sub-therapeutic levels are approached after about 12 h following administration, thus require additional dosing with the drug. With plural daily dosing regimen, the most common side effect is nausea, experienced by 45% of patients under treatment with VHCl. Vomiting also occurs in about 17% of the patients [4] and at higher doses VHCl is associated with a rise in blood pressure [5]. These adverse effects which may hinder the proper compliance of VHCl will be reduced if therapeutic levels are maintained in blood without significant fluctuations. Patents on extended release oral formulations of VHCl claim better control of blood plasma levels and a lower incidence of nausea and vomiting compared to conventional tablets [6,7]. But it has been shown that once daily extended release oral formulation of VHCl offers no distinct advantage in terms of GI adverse effects [8]. Transdermal delivery of VHCl may allow administration of therapeutically effective amounts besides avoiding or reducing the incidence, severity or duration of the undesirable side effects generally associated with its oral administration.

Transdermal drug diffusivity in general is size dependent i.e., large molecules diffuse more slowly than small ones. The existing transdermal drugs all have molecular weight less than 350 Da and the molecular weight of VHCl is 313.87 [9]. However the highly hydrophilic nature of VHCl may not favour the permeation of the drug through skin. Consequently the less hydrophilic metabolite of VHCl, O-desmethyl venlafaxine (ODV) has been attempted for transdermal delivery as revealed in a patent [2]. Alternately iontophoretic delivery of VHCl has been reported as a physical means of enhancing transdermal permeation [10]. Alteration of the structure of stratum corneum and the subsequent increasing the skin diffusion of drugs can also be accomplished by the use of chemical enhancers [11]. Skin permeation enhancers broaden the range of drugs that can be delivered transdermally by increasing the penetration of permeants through enhanced diffusion of the stratum corneum [12]. The present study was undertaken to investigate the improvement in the transdermal delivery of VHCl across pig ear skin using permeation enhancers in the drug loaded gel formulation.

Accurately weighed amount of sodium alginate (5% w/w) was dissolved in water with rapid and continuous stirring and heated on mantle until it forms a homogenous gel. Methyl paraben was added to the hot gel and mixed well. The preparation was cooled to room temperature. VHCl (25% w/w) and weighed quantities of various penetration enhancers (Table 1) were mixed with the prepared gel base thoroughly.

Pig ears were obtained from freshly slaughtered pigs from a local slaughter house. Hairs on the skin were removed by using a standard depilatory without causing any damage to the skin. The skin was washed thoroughly in order to obviate the influence of the depilatory on the subsequent drug permeation study after which it was excised carefully from the adhering tissues and the subcutaneous fat was completely removed using isopropyl alcohol. Finally the skin was washed with tap water thoroughly. The average thickness of the skin was found to be 0.464±0.0386 mm (n=10). The average hair follicles in the isolated porcine skin sample was 64.5/cm2 which justifies the choice of pig skin for assessing the skin permeability as the average human skin surface is known to contain on average 40–70 hair follicles on every cm2 of skin area [15].

Thus prepared pig ear skin was mounted between the half cells of the modified Franz diffusion apparatus with the dermis in contact with the receptor fluids pH 7.4 phosphate buffer and equilibrated for 1 h. The area available for diffusion was 3.14 cm2. Gel formulations equivalent to 37.5 mg of VHCl was applied on the stratum corneum of the skin in the donor compartment. The donor cell was covered with an aluminum foil and the receptor compartment medium was maintained at 37±0.5°. The permeation studies were carried out for 12 h. Samples (1 ml) were withdrawn periodically and replaced by equal volumes of phosphate buffer pH 7.4. The withdrawn samples were analyzed spectrophotometrically for drug content at 274 nm in Systronics – 2201 UV/Vis double beam spectrophotometer. The permeation of VHCl from the prepared gels with and without permeation enhancers was determined thrice and the average cumulative amounts of VHCl permeated from the formulations are presented graphically in fig. 1. Flux was calculated as the amount of drug permeated per unit surface area in unit time.

Table 2: Effect of permeation enhancer on flux of venlafaxine hydrochloride 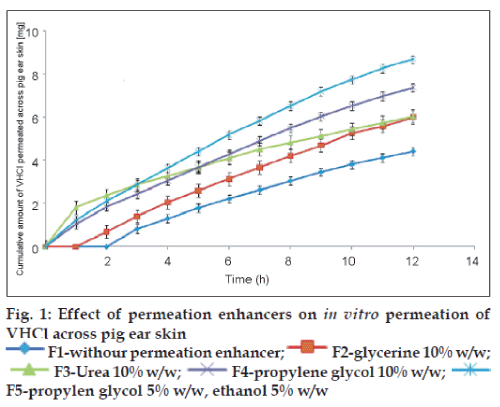 The initial lag time of 2 h in drug permeation observed from sodium alginate gel was reduced to 1 h by the inclusion of glycerin, while it was abolished with urea, propylene glycol and mixture of propylene glycol and ethanol. The diffusion of drugs through the stratum corneum is the rate controlling barrier to transdermal permeation for both lipophilic and hydrophilic drugs. The protein and lipid regions in the stratum corneum form the polar and nonpolar pathways, respectively. The transcellular route or polar pathway takes place through the hydrated proteins of the keratinocytes. Penetration enhancers affect this pathway by hydration and swelling of the proteins and by inducing conformational changes in these proteins. The initial high permeation shown by urea compared to other enhancers may be due to its keratolytic and protein denaturizing properties and moisturizing as a mechanism of action [11]. But the steady state flux (Fss) was more with other penetration enhancers compared to urea.

Glycerin being a humectant is effective in combination with water as an enhancer of skin permeation [11]. Ethanol and propylene glycol are small solvent molecules that will in their own right permeate into the skin. Their presence in the skin will change the partitioning of the drug between the delivery device and skin. If partitioning is increased there will be an enhanced flux [16]. The other effects of ethanol are to increase lipid fluidity and solute diffusivity in the stratum corneum [17]. Ethanol extracts lipids from skin which also accounts for skin permeation enhancement and the skin responds quite rapidly to lipid extraction [18].

In the present study, PG and ethanol mixtures have shown the maximum permeation enhancement (85.11%). Propylene glycol (PG) although it does not act on lipids, is capable of solvating keratin and competing for the hydrogen bonding sites of the protein and shows strong enhancement [11]. Protein denaturation may disrupt the barrier as may fluidization and randomization of intercellular lipids or intercellular delamination and expansion [19].

The maintenance requirement of VHCl was calculated to be 3.1 mg/h [10]. The steady state flux with PG and ethanol mixture (F5) was 0.203 mg cm−2 h. Hence an application area of 15.27 cm2 would be sufficient to arrive at the required therapeutic concentration of VHCl in the blood.

The results of the present study indicate that the inclusion of mixture of permeation enhancers, Propylene glycol and ethanol may make the transdermal delivery of VHCl feasible.