Wheat seedlings as food supplement to combat free radicals: An in vitro approach

In the present era, people are affected by various diseases due to changes in culture and lifestyle. The changes in food habits and working pattern causes stress which leads to biochemical changes. Research findings relate oxidative stress to a number of diseases like cancer, diabetes, Alzheimer’s disease, coronary heart diseases, and aging [1,2]. Scientific reports emphasize the importance of dietary antioxidants as they may decrease the risk of these diseases and also improve general health [3]. Various parts of plants such as fruits, leaves, seeds, and oils contain many natural antioxidants like flavonoids, tannins, coumarins, curcuminoids, xanthones, phenols, and terpenoids [4]. Phenols which are good sources of natural antioxidants are present in cereals and legumes [5]. Slavin et al. [6] reported the whole grains to be an excellent source of carbohydrates, dietary fiber, protein, E and B-group vitamins, and minerals. Several research studies revealed that the whole grain diet reduces the body mass index. Moreover reduced risk of cardiovascular disease [7], colorectal cancer [8] and hypertension in women [9] is also related to the whole grain diet.

Wheat is one of the major cereals in India and constitutes the staple food in North India [10]. Wheat bran, germ, and endosperm are together known as wheat kernel. The antioxidants reported from wheat are carotenoids, tocopherols, flavonoids, and phenolic acids [11]. Ferulic acid is one of the phenolic compounds available in wheat which has strong antioxidant activity [12]. The reports of phytocompounds isolated from the wheat are only limited. Wheat germ extract contains 2,6-dimethoxy-1,4-benzoquinone (DMBQ) and 1,4-benzoquinone (BQ) [13] and the presence of hydroxybenzoic acids (p-hydroxybenzoic acid, vanillic acid and syringic acid), hydroxycinnamic acids (p-coumaric acid, ferulic acid and ferulic acid derivatives) and a flavonoid (apigenin) was reported by Hernández et al [14].

The antioxidant activities of whole wheat and milling fractions have been widely elucidated [15] against oxidation of DNA, proteins, and membrane lipids which are biologically important molecules [16]. The different parts of wheat are also tested for their antioxidant activity. Wheat bran extracts are proved to scavenge free radicals of 1,1-diphenyl- 2-picrylhydrazyl (DPPH), 2,2’-azinobis-(3- ethylbenzothiazoline-6-sulfonic acid) (ABTS+), and peroxide anion (O2 -) [11]. They also have been reported to inhibit the peroxidation of human LDL cholesterol [16], phospholipid liposomes, and hydrogen peroxide [17]. The roasted defatted wheat germ [5,18], the oil from wheat germ [19] and wheat germ protein hydrolysates [20] have also been reported to exhibit antioxidant activity and the antioxidant activity of the coloured wheat seeds may be attributed to the natural pigments of wheat seeds [21-27]. Onyenecho and Hettiarachchy [28] demonstrated that oxidation of bulk oils was inhibited by phenols from ethanol extracts of wheat bran. Species, genotypes, and growing locations are also having pronounced effect on the difference in the antioxidant properties of wheat [29-31].

Increase in antioxidant content of 3 to 5 days wheat sprouts was due to germination [32] and the content of fatty acids like palmitic acid, linoleic acid, and oleic acid were also found to be high in wheat sprouts [33]. Previous findings reported that aqueous and ethanol extracts of wheat grass have potent antioxidant activity and inhibit proliferation of leukemia cells [34] and the antioxidant properties were changed by lighting effects [35].

Collection and preparation of plant material

Wheat (Triticum aestivum) seeds (Variety: HD2833- Pusa Tripti) were obtained from the Indian Agricultural Research Institute (IARI), Wellington, The Nilgiris, India. One thousand five hundred grams of wheat seeds were taken, washed and soaked in distilled water for 12 h and kept for germination up to 3, 5 and 7 days as each 500 g and WG (without germination, 500 g) were taken after thoroughly washed with distilled water. The WG and germinated WS were shade dried and homogenized to fine powder which was used for further processing.

Wheat grains and different days (3, 5 and 7 days) of wheat seedlings powder were taken and extracted separately with solvents of increasing polarity (petroleum ether, n-hexane, chloroform, ethyl acetate, and methanol) using a Soxhlet apparatus for 48 h, filtered and the extracts were concentrated to 2% of the original volume using Rotavapor, (Buchi-R210, Switzerland). The final yields of the extracts were used for studies.

The antioxidant activities were determined using DPPH as a free radical [36]. Sixty microliters each of all the five extracts of WG, 3, 5 and 7 d old wheat seedlings (30 mg/ml concentration) were made up to 0.1 ml with methanol to which 3.9 ml (0.025 g/l) of the DPPH solution was added. A control solution was prepared without the addition of the extract and methanol was used as blank. The absorbance was measured at 515 nm. The analysis was performed in triplicate and the scavenging activities of the extracts were calculated using the following equation: DPPH radical scavenging activity (%)= [(Abscontrol-Abssample)/Abscontrol]×100. Where Abscontrol=absorbance of DPPH+methanol; Abssample=absorbance of DPPH+WG/WS extracts.

The total antioxidant activity of all the five extracts was measured by ABTS radical cation decolorization assay according to the method of Re et al. [37] described by Siddhuraju and Manian [38]. ABTS radical was produced by reacting 7 mM ABTS aqueous solution with 2.4 mM potassium persulfate in the dark for 12- 16 h at room temperature. Prior to assay, this solution was diluted in methanol and equilibrated at 30o to give an absorbance at 734 nm of 0.700±0.02 and in the present study, the stock solution was obtained in the ratio of 1:53 v/v. One ml of the ABTS stock solution was added to 4 µl of test sample (10 mg/ml concentration). The control was prepared without test sample solution. After the initial mixing, all the tubes were kept at 30º exactly for 30 min and absorbance was measured at 734 nm and here, methanol was used as blank. The analysis was done in triplicate and the percentage scavenging activities of the extracts were calculated using the following equation: ABTS radical scavenging activity (%)= [(Abscontrol-Abssample)/ Abscontrol]×100. Where Abscontrol=absorbance of ABTS solution+methanol; Abssample=absorbance of ABTS solution+WG/WS extracts.

The total phenolic content was determined according to the method described by Siddhuraju and Becker [39]. In the test tubes, 40 µl each of all the five extracts of WG, 3, 5 and 7 d old wheat seedlings (30 mg/ml concentration) were taken and made up to volume of 1 ml with distilled water. Then 0.5 ml of Folin-Ciocalteu phenol reagent (1:1 with water) and 2.5 ml of sodium carbonate solution (20%) were added sequentially in each tube. Soon after vortexing the reaction mixture, the test tubes were placed in dark for 40 min and the absorbance was recorded at 725 nm. The analysis was performed in triplicate and the results were expressed as gallic acid equivalents (GAE) using the following linear equation based on the calibration curve: y=mx+c (y=absorbance, x=phenolic content, and c=intercept). The values of the equation was found to be Y=0.045x-0.033 with R2=0.997.

The reducing power of the extracts was determined according to the method described by Oyaizu [40]. In the five test tubes, 40 µl each of all the five extracts of WG, 3, 5 and 7 days old wheat seedlings (30 mg/ml concentrations) were taken and made up to 1 ml with methanol, further mixed with phosphate buffer (2.5 ml, 0.2 M, pH 6.6) and potassium ferricyanide [K3Fe(CN)6] (2.5 ml, 1%). After incubating the mixture at 50° for 20 min, 2.5 ml of trichloroacetic acid (10%) was added to the mixture, which was then centrifuged at 3000 rpm for 10 min. The upper layer of the solution (2.5 ml) was mixed with distilled water (2.5 ml) and FeCl3 (0.5 ml, 0.1%). The absorbance was measured at 700 nm. Increased absorbance of the reaction mixture indicated increased reducing power. Ascorbic acid was used as standard. A control solution was prepared without the addition of the extract. The analysis was performed in triplicate and the results were expressed as mean±standard deviation.

All the values were presented as mean±standard deviation and the statistical analyses were done using the SPSS (version20) package for windows. Using this software, one way ANOVA followed by Tukey’s method was performed to find the significant differences among the samples.

Lower the absorbance of the reaction mixture, higher the free radical scavenging activity and is expressed in percentage scavenging. When the DPPH free radical scavenging activities of petroleum ether and hexane extracts of wheat grains (WG) and 3, 5 and 7 days old wheat seedlings (WS) were analysed, no significant difference was observed (fig. 1). The chloroform (65.60, 55.83 and 45.28%) extract of 3, 5 and 7 days WS and methanol extract (72.76, 48.49 and 47.8%) of 5, 3 and 7 days WS, respectively, exhibited better activity than WG (38.96 and 33.69%) whereas ethyl acetate extract of 3 days WS (64.83%) only had higher activity than WG (50.53%). Of the seedlings, chloroform, ethyl acetate of 3 day WS and methanol extract of 5 day WS had higher DPPH radical scavenging activity and there was a decreased activity in 7 day WS. The observed results showed significant (P<0.05) differences at 5% level. 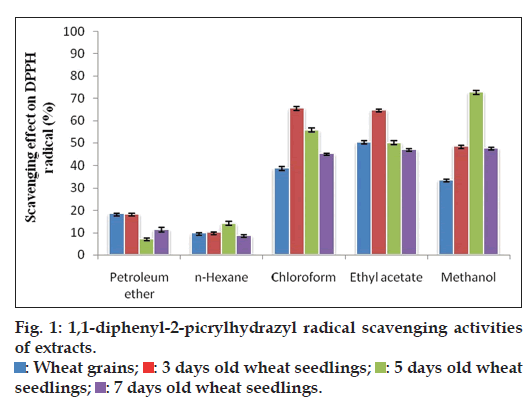 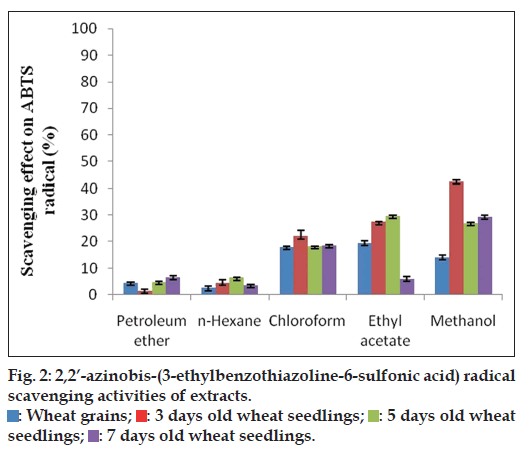 Total phenolic content of all the five extracts of WG, 3, 5 and 7 day old WS were evaluated and the results were tabulated (Table 1). Phenolic content was high in chloroform, ethyl acetate and methanol extract of 5 d WS. When compared with WG, the total phenolic content started to increase in 3 and 5 d WS then decresed in 7 d WS, whereas petroleum ether and n-hexane extracts of WS had very low level of phenols. While comparing all the samples based on the polarity, significantly the chloroform extract had high phenolic content and it decreased when go for methanol extract. Further, the significant differences were not observed between chloroform and ethyl acetate extract of all the four samples. The observed results showed significant (P<0.05) differences at 5% level.

In the present study, compared to WG, 3, 5 and 7 day WS had higher radical scavenging activity. It is interesting to note an earlier report which stated that thermal processing of 2 day wheat sprouts and 10 day seedlings increased the DDPH radical scavenging activity [43]. Total phenolic content is directly proportional to the antioxidant activity because phenolics are the main antioxidant components present in the plant extracts [44,45]. Previous report states that the single group of plant phenolics and the flavonoids were used in many applications like antibiotics, antiulcer, and antiinflammatory agents [46]. The present investigation demonstrated that chloroform extracts of all the four samples have more phenolics. Phenolic content of 2 day wheat sprouts (9%) and 10 day wheat seedlings (8%) were increased by thermal processing [43]. In the current study, when comparing with WG, phenolics are high in WS. Further, the results of this study showed that phenolics are high in 3 and 5 day seedlings and it started to decrease in 7 day wheat seedlings. From the earlier reports it was observed that 10 day old wheat seedlings have the lower content of phenolics than 2 day wheat sprouts which is in consistent with the results of present study.

The results of the present study recommend the 3 day old wheat seedlings as food supplement in the treatment of diseases caused by the free radicals. As wheat is already a staple diet, 3 day WS can be advised to the patients and can be tested for synergism with regular medications in combating free radicals.

The authors are very grateful to the University Grants Commission (UGC), New Delhi, India for providing the financial support of this work under the scheme of UGC Major Research Project (F. No.36-51/2008 (SR)).