Of the various structurally diverse compounds known to bind 5-HT 1A receptor sites, arylpiperazine derivatives represent one of the most important classes. This article deals with the development of a QSAR equation relating the ligand binding activity of various literature reported arylpiperazines acting as agonists at the 5-HT 1A receptor to their 2D descriptors. Significant equation was generated using MOE 2004.03 and validated subsequently using leave one out and test set prediction methods. The equation revealed the importance of combination of electronic and lipophilic parameters in explaining the observed variance.

Serotonin (5-hydroxytryptamine, 5-HT), a neurotransmitter in brain has drawn considerable amount of attention in past few years because of detection of multiple, central 5-HT receptors [1,2]. 5-HT1A receptor is the best characterized receptor among these due to the availability of a specific partial agonist, 8-hydroxy-2-(di-n-propylamino)tetraline [3] (8-OH DPAT). The 5-HT1A receptor is a G-protein coupled receptor [4] and is reported to be associated with inducing sleep, cognition, sensory perception, motor activity, temperature regulation, nociception, appetite, sexual behavior and hormone secretion [5]. This receptor is also involved in the psychiatric disorders like depression and anxiety. Therefore modulation of 5- HT1A receptor activity will be an important therapeutic approach in the treatment of these disorders in future. No clinically used specific agonist for 5-HT1A receptor is available currently.

The design of a drug involves a multidisciplinary approach and requires assimilation of information generated by diverse techniques. SAR of arylpiperazines as 5-HT1A agonists [6] and the pharmacophore elements for 5-HT1A receptor agonist [7-10] have been reported in the literature. However a complete X-ray crystallographic data indicating the structure of the 5-HT1A receptor and the receptor bound conformation of arylpiperazine ligands is not available.

In the absence of availability of receptor bound conformation, the ligand based methods of analysis like QSAR form one of the major approaches for understanding the available biological data and developing predictive correlations. This can help to keep the number of synthesized and tested compounds to the minimum, apart from assisting in the prediction of the nature of the receptor. 3D QSAR studies of some arylpiperazines are reported [11]. However unambiguous 3D alignments frequently remain a difficult task particularly for flexible molecules such as arylpiperazines containing a 2-3 carbon alkyl chain. Therefore it was decided to initiate the QSAR studies with 2D descriptors and generate QSAR equations which will help in further development of 5-HT1A agonists.

The initial dataset used consisted of 44 literature reported molecules [12,13] of arylpiperazine class, core structures of which are as given in figs. 1 and 2, along with their reported pKi values. This Dataset was then randomly divided into a training set of 37 compounds, structures of which are tabulated in Table 1 and a test set of 7 compounds, structures of which are tabulated in Table 2, taking care that the mean pKi values of the two sets remain comparable. Molecules were built within MOE 2004.0314. The structures were refined using ‘Wash’ module. Molecules were then energy minimized using MMFF94x force field. Due to the unavailability of the receptor bound conformations of these molecules, the 3D molecular descriptors were excluded and only 2D molecular descriptors were calculated for the dataset using ‘QSAR_descriptor’ functionality. Descriptors were pruned using genetic algorithm (GA) and QSAR contingency modules. Table 3 gives the definitions of the descriptors used for deriving QSAR equation. QSAR equation was generated with an assumption that all the compounds in the dataset posses same mechanism of action. The statistical method used for generating QSAR equation was Partial Least Squares (PLS) method. QSAR model was validated using leave one out method, by randomizing the Y-responses [15] and test set predictions. Standard related statistical parameters [16] like correlation coefficient r, standard error s, F-test value, q2 value were calculated for the equation.

Fig. 1: Core structure 1 of agonist dataset
The details of n, X and R are indicated in the Tables 1 and 2

Fig. 2: Core Structure 2 of Agonist Dataset
The details of n, X and R are indicated in the Tables 1 and 2

The core structures are indicated in figs. 1 and 2. pKi (obs) indicates the observed pKi for the training set and pKi (pred) indicates the pKi calculated using the equation.

Descriptor definitions are as indicated in the molecular modeling software MOE

The QSAR equation derived showed a very good r (correlation coefficient) value of 0.92 with 84.37% of the variation in biological activity being explained by the equation. This is associated with a low value of standard error of estimate, s, of 0.23. The equation is found to be highly statistically significant with F-test value of 22.378, critical F-test value at 99.9% confidence limit being 4.82. The model when validated using leave one out method showed good internal predictivity with the q2 value being 0.74 indicating good predictivity of the model. Fig. 3 shows the plot of observed v/s predicted pKi values for training set using the above mentioned equation. Fig. 3: Plot of observed vs. predicted activity for training set

Further validation of the model was carried out by randomization of Y- responses (pKi values) to ensure the absence of chance correlation. Randomization was carried out in triplicates. For each randomization the r value decreased drastically indicating the absence of chance correlation. The mean r2ran was found to be 0.32. When the model was subjected to test set predictions it also exhibited good external predictivity with the r2test value being 0.60. Table 2 shows the predicted pKi values and (fig. 4) shows the plot of observed v/s predicted pKi values for test set. 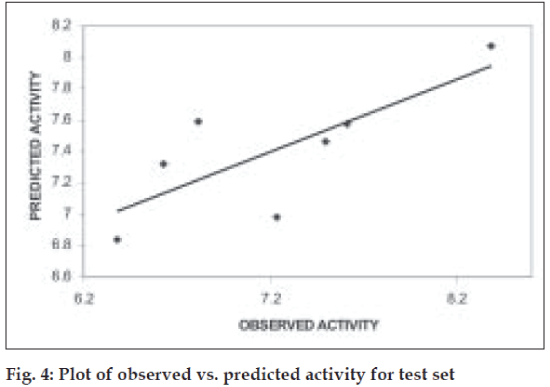 Fig. 4: Plot of observed vs. predicted activity for test set

The descriptors diameter, b_1rotN and PC+ were found to contribute more significantly to the activity as indicated by their higher coefficients in the equation. This suggests that size and shape of the molecule along with its flexibility and the total positive partial charge on the molecule play a significant role in determining the interaction with the receptor. These findings are in agreement with the pharmacophore model reported for 5-HT1A agonist which states that aromatic ring and basic nitrogen are two structural features necessary for ligand recognition7,8. SAR studies reported for arylpiperazines state that presence of alkyl chain improves the activity. This is also proved mathematically by the equation where number of rotatable bonds is a descriptor of greater significance and is positively correlated with biological activity. Other reported pharmacophore models state that the third structural feature of the pharmacophore is an oxygen atom which can act as H-bond acceptor9,10. These pharmacophore models were developed using aminotetralin derivatives without inclusion of the arylpiperazines containing the oxygen atom. A closer look at the structures of the present dataset shows that some of the arylpiperazines of the training set show presence of amide oxygen. This atom may be involved in the H-bonding interaction with the receptor. To model this interaction it was decided to include an indicator variable term I1 which assumed a value of 1 when amide oxygen is present and 0 when amide oxygen is absent. The equation thus generated was as follows: pKi = 42.46 − 2.37 (diameter) + 2.63 (b_1rotN) − 0.065 (PEOE_VSA+1) − 0.12 (SlogP_VSA7) − 0.054 (SMR_VSA7) − 0.18 (Q_VSA_POL) + 6.12 (PC+) + 0.20 (I1), n= 37; r = 0.9194; r2 = 0.81773; s = 0.23361; F = 19.1370.

Although the coefficients of the descriptors have increased slightly in the above equation, there is no significant improvement in the r, s and F values of the equation by inclusion of indicator variable. Thus it may be stated that presence of amide oxygen in this series of arylpiperazines is not an absolute must.

A different set of descriptors may give different correlation with activity and this should be considered while interpreting the equation. The QSAR equation generated presently for arylpiperazine is in agreement with the literature reports for ligand requirements based on the SAR and pharmacophore generation technique. Further, this equation provides a mathematical tool for designing compounds with better activity.

The authors are thankful to AICTE for sanction of grant for the software. Authors are also thankful to Hyderabad (Sindh) National Collegiate Board and Dr. S. R. Naik, Principal of Prin. K. M. Kundnani College of Pharmacy for providing necessary facilities.