Ondansetron combination with proton pump inhibitors has recently been introduced in market for the treatment of peptic ulcer, gastroesophagal reflux disease (GERD) and to prevent nausea. Ondansetron antagonizes 5HT-3 receptor both peripherally as well as centrally and block the initiation of the reflux, so is used as antiematic. Ondansetron is official in USP1. Omeprazole and rabeprazole are benzimidazole proton pump inhibitors, which suppress gastric acid secretion by H+/K+-ATPase enzyme system at the secretory surface of the gastric parietal cell. These drugs are used for the treatment of duodenal, gastric and esophageal ulceration. Omeprazole is official in USP [1], IP [2], BP [3], where as rabeprazole is not official in any of the pharmacopoeia, but is reported in Merck Index [4].

Literature survey revealed HPLC [5,6] in human plasma, visible spectrophotometric method [7] for ondansetron in solid dosage form. For omeprazole methods reported are HPLC-MS and HPLC-UV in biological fluids [8,9], capillary electrophoresis [10], HPLC employing electrochemical and coulometric detection [11], TLC [12] and spectrophotometry [13]. For rabeprazole method reported are HPLC for detection in blood plasma [14,15] spectrophotometric methods [16], and LC-MS/MS [17] method. As no analytical method has so far been indicated for the ondansetron combinations with proton pump inhibitors, an attempt has been made to estimate them simultaneously by HPTLC.

TLC plates were prewashed with methanol and activated prior to use. The chromatographic conditions maintained were: Precoated Silica gel 60 F254 (20×10 cm) aluminum sheets as stationary phase. Dichloromethane:methanol (9:1 V/V) as mobile phase for both the ondansetron combinations. Samples were applied as bands 5 mm width at 14.1 mm intervals using Camag linomate V semiautomatic sample applicator and migration distance allowed was 80 mm, drying of plate done for 3 min at 600 temperatures. The plates were scanned at 309 nm for omeprazole and ondansetron and 294 nm for rabeprazole and ondansetron combination with Camag TLC scanner III, using Camag Win CATS software (fig. 1).

For calibration curve, 0.1, 0.2, 0.3, 0.4 and 0.5 µg/ µl standard solution of omeprazole, rabeprazole and ondansetron were applied on TLC plate. The TLC plates were dried, developed and analyzed as described earlier.

Filtered solutions (6 µl) of the marketed formulations were spotted on to the plate followed by development scanning. The analysis was repeated six times, the spot was resolved into two peaks in the chromatogram of drug samples. The contents were calculated from the peak areas of standards and samples recorded.

A solvent system that would give dense and compact spots with appropriate and significantly different Rf values was desired for quantification of ondansetron combinations. The mobile phase consisting of dichloromethane: methanol (9:1 V/V) gave Rf value of 0.42±0.02, 0.54±0.03, respectively for ondansetron and omeprazole while for ondansetron and rabeprazole, 0.41± 0.02 and 0.51±0.02, respectively (fig. 2). 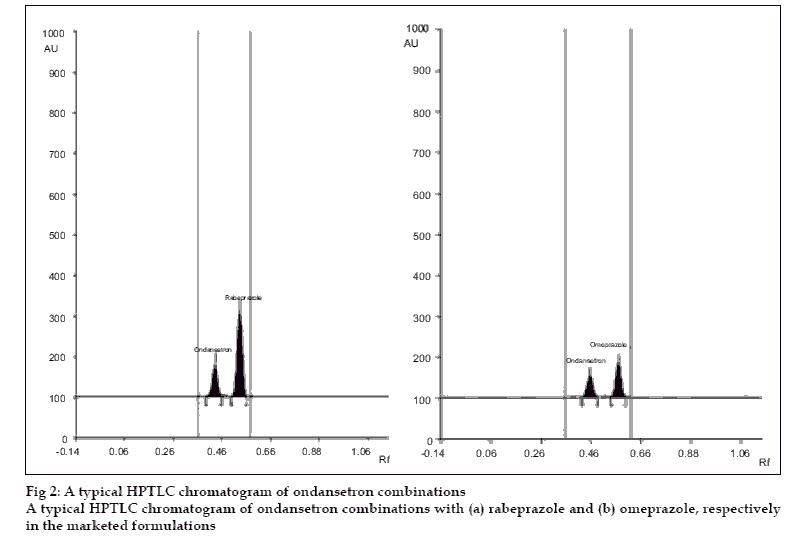 The assay value for the marketed formulation was found to be within the limits as listed in Table 2. The low RSD value indicates suitability of the method for routine analysis of omeprazole, ondansetron and rabeprazole, ondansetron in pharmaceutical dosage form. Recovery studies were carried out to study accuracy and precision of the method. These studies were carried out at three levels i.e. multiple level recovery studies. To the powder formulations the pure standard drug were added at 80%, 100% and 120% levels, dilutions were made and analyzed by the method, the % recovery was calculated by using formula, % recovery = (T-A)/S × 100 where, T is total amount of the drug estimated, A is the amount of drug contributed by tablet powder and S is the amount of pure drug added. The results of recovery studies for both the ondansetron combinations were found to be around 99-100%, indicating that the method is free from interference from excipients.

The ruggedness of the method was evaluated by studying analyst to analyst, intra day and inter days variations and the % RSD was calculated, that was found to be within range. From the above results it can be concluded that the HPTLC method is accurate, precise, specific and reproducible and can be used for routine analysis of ondansetron combinations with proton pump inhibitors in solid dosage form.

The authors thank the Principal, Institute of Pharmaceutical Education and Research, Wardha and Anchrom Lab, Mumbai for providing facilities for the research work and Neon Lab Ltd for providing ondansetron, Dr. Reddy′s Lab for providing rabeprazole and Zydus Cadila Health Care for providing omeprazole as gift sample for analysis.