A high performance thin layer chromatography method was developed for roflumilast on silica gel 60F254 thin layer chromatography plates using mobile phase comprising of toluene:ethyl acetate (7:3% v/v) with detection set at 254 nm on a densitometer. The Rf value of roflumilast was 0.54±0.02. Percent recovery of the drug from tablet formulation was carried out by standard addition method and was found to be close to 100 and percent relative standard deviation was less than 2%, which indicated good accuracy and precision of the method. Roflumilast was subjected to acid, alkali and neutral hydrolysis, oxidation and thermal and photolytic degradation. Degradation studies indicated roflumilast to be susceptible to acid and alkaline hydrolysis and oxidation. The degradation product was well resolved from the pure drug with significant differences in Rf values. The developed validated method was applied to formulation, content uniformity test and accelerated stability studies of roflumilast. The rate of hydrolysis was found to increase with increase in the strength of hydrochloric acid. It was observed that temperature had a major effect over acid hydrolysis of roflumilast compared to varying the strength of hydrochloric acid. Further this study can be extended for the determination of shelf life of roflumilast formulations.

Roflumilast [1], 3-(cyclopropylmethoxy)-N-(3,5- dichloropyridin-4-yl)-4-(difluromethoxy) benzamide (Figure 1), is a white fine powder freely soluble in acetone and acetonitrile, sparingly soluble in methanol and insoluble in water. Roflumilast, used for chronic obstructive pulmonary disease (COPD), is a selective, long-acting inhibitor of enzyme PDE-4. It has potential antiinflammatory and antimodulatory effects in the pulmonary system. It is thought that the increased levels of intracellular cyclic adenosine mono phosphate (AMP) are responsible for the therapeutic actions of roflumilast. Literature survey revealed that ultra violet (UV) [2], high performance liquid chromatography (HPLC) [3,4], stability indicating HPLC methods [5-7] were reported for the estimation of roflumilast. However, high performance thin layer chromatography (HPTLC) method has not yet been reported for the determination of roflumilast in formulations. 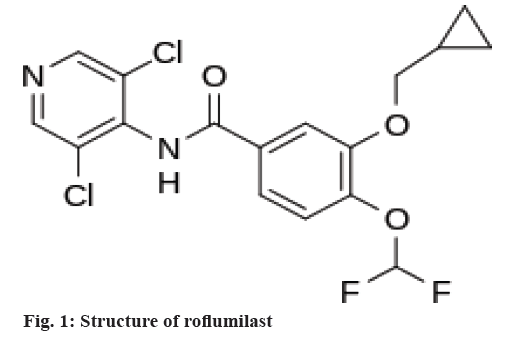 The International Conference on Harmonization (ICH) guideline entitled “Stability testing of new drug substances and products” requires testing to be conducted to assess the inherent stability of the active substances [8]. An ideal stability-indicating method is one that resolves the drug and its degradation products efficiently. Hence it is necessary to conduct stability studies of roflumilast under acidic, alkaline, oxidative and photolytic conditions. The main aim of the present work is to develop novel validated stability indicating HPTLC technique for the estimation of roflumilast in formulation and its application to accelerated stability studies. The proposed method is simple, accurate and reproducible, can be employed for the routine quality control analysis.

Initially the method was developed using toluene:ethylacetate (7:3% v/v) as the mobile phase and precoated silica gel 60F254 T LC plates as the stationary phase. After applying the spots, the plate was developed, dried and scanned keeping the slit dimension at 5.00×0.45 mm and scanning speed at 20 mm/s using Camag TLC scanner 3 at 254 nm, controlled by WinCATS software. Deuterium lamp was used as the radiation source and densitometric evaluation was carried out to understand the effect of the above mentioned variables over Rf values of roflumilast so as to find the optimized chromatographic conditions. Ten milligram of roflumilast was weighed accurately and transferred to 10 ml volumetric flask in acetonitrile and made up to 10 ml to get a concentration of 1000 μg/ml.

The linearity of response for roflumilast was assessed using different concentration from 0.6-2.6 μg/spot. Peak area was noted for each spot and plotted against concentration to get a linear graph. The peak purity of roflumilast was also assessed by comparing the chromatogram at three different levels of peak start, peak apex and end position of the peak. The preanalysed samples were spiked with extra 50, 100, 150% of standard roflumilast and the resulting solutions were analysed by the developed method. Repeatability of sample application and measurement of peak area were carried out using six replicates of same spot 1.4 and 1.8 μg/spot of roflumilast.

The intra-day and inter-day variations were also carried out for the same above mentioned concentrations and the %RSD values were calculated. Detection limit (LOD) and limit of quantification (LOQ) was calculated using the Eqns., LOD = 3.3×σ/S; LOQ = 10×σ/S, where, σ is the standard deviation of y intercepts of regression line and S is slope of calibration curve.

Robustness was evaluated using 1.8 μg/ spot by making small changes in mobile phase composition, chamber saturation time, migration distance, for about ± 0.1 ml, ± 5 min and ± 5 mm, their effects on Rf value were analysed and the %RSD was calculated. Stability was evaluated using the concentration of 1.4 μg/spot, after storing the stock solutions of roflumilast at room temperature for 48 h and under refrigeration for 3 d.

Application of study to assay of formulation:

To determine the amount of roflumilast in formulation, the tablets were powdered and powder equivalent to 10 mg of roflumilast was weighed. The drug was extracted with acetonitrile after sonication for 5 min. filtered using Whatman filter paper No.1 and volume was made up to 10 ml. Then 10 μl of the filtrate was applied on pre coated TLC plate and the chromatogram developed was scanned under the optimised conditions. The calibration graph prepared was used to find out the concentration of the drug. This analysis was repeated for six times.

Ten tablets were randomly selected from a lot of twenty tablets to perform content uniformity test. After extracting the drug using acetonitrile, a fixed volume of 20 μl was taken and applied on a 20×10 cm HPTLC plate. The plates were developed and scanned at 254 nm. The amount present in roflumilast formulation was determined by relating formulation to the standard graph and the corresponding percent label claim was calculated.

Method application to degradation kinetics [9], the order of reaction:

Ten millilitres of 2 N HCl was added to 25 mg of roflumilast and made up to 25 ml with acetonitrile in a volumetric flask. This was refluxed at 80° for 5 h. From the stress sample prepared about 10 μl was spotted from 200 μg/ ml, along with standard on HPTLC plate and chromatograms were recorded.

Effect of concentration of HCl on the reaction rate:

Into a series of 25 ml volumetric flasks, 25 mg of roflumilast was taken, dissolved in acetonitrile and 10 ml of 1, 1.5 and 2 N HCl were added separately and the volume was made up with acetonitrile. These solutions were transferred into a clean round bottom flask and refluxed at 80° for 5 h. From the degraded solution, further 1 ml was made up to 5 ml (200 μg/ ml). From this 10 μl of each solution was spotted along with standard solution of roflumilast were applied on HPTLC plate and chromatograms were recorded under optimized condition.

Effect of temperature on reaction rate:

Twenty five milligrams of roflumilast was taken in three different 25 ml volumetric flasks, 10 ml of 1, 1.5 and 2 N HCl was added separately and the volume was made up with acetonitrile. These solutions were transferred into clean dried round bottom flasks and then refluxed at 50, 60, 70 and 80° for 5 h. One millilitre of stressed sample solution was diluted to 5 ml and 10 μl was spotted along with the standard on HPTLC plate.

The high correlation coefficient obtained from linear regression analysis showed good linear relationship over the concentration range of 0.6-2.6 μg/spot and the chromatogram of 1.4 μg/spot is shown in Figure 2. The correlation coefficient, slope and intercept were found to be 0.99978 ± 0.00018, 3.123 ± 0.00687, 1112.65 ± 1.3670, respectively from calibration graph. The peak purity index at the peak start, peak apex and peak end was determined and was found to be 0.999, which proved high specificity of the method. The high percent recovery, Table 1 showed good accuracy of the method. Percent RSD values, <2 for inter-day precision and intra-day precision, repeatability, indicated that the method is precise. LOD and LOQ were calculated from the equation and was found to be 1.444 ng/spot, 4.377 ng/spot. The study was confirmed to be robust as the Rf value and peak area was not much affected by introducing slight changes in the experimental conditions that is shown in Table 2. Stability in sample solution was about 6 h at normal room temperature and about 3 d at refrigration. The percent label claim was calculated and the estimated amount was close to the labelled value. The corresponding reports are presented in Table 3. The content uniformity test is used to ensure that every tablet contains the amount of drug substance intended with little variation among tablets in a batch. The % labelled claim was found to be in the range of 99.50-104.9, the %RSD was calculated and found to be 1.512.

Rofaday is the brand name of roflumilast 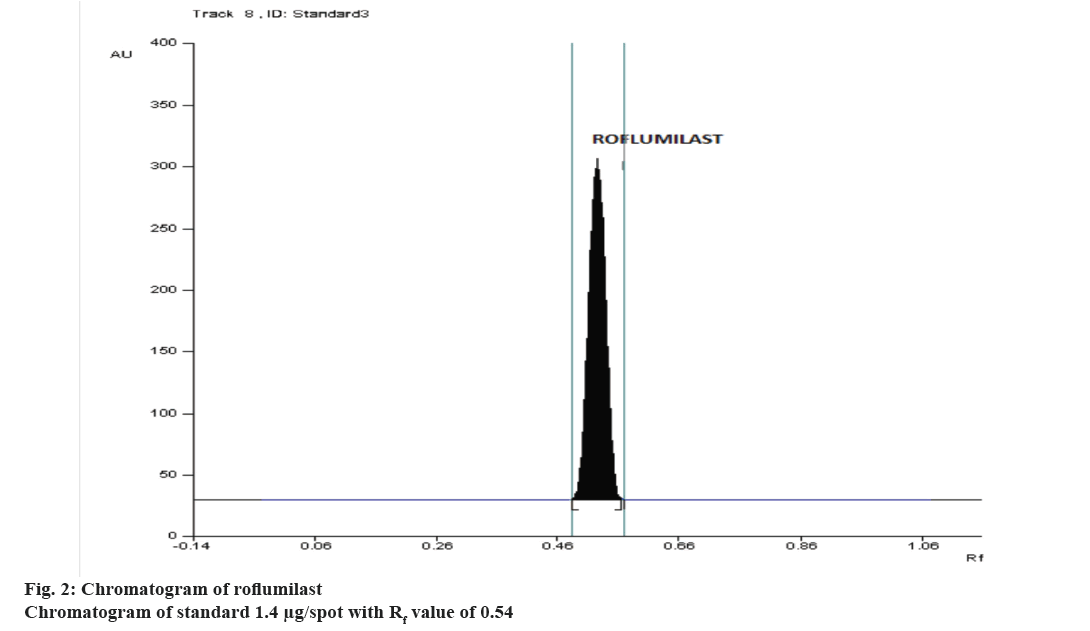 During optimization of the hydrolytic degradation process, roflumilast was refluxed using 2 N HCl at 80° for 5 h showed 50.20% degradation (Figure 3) where as 25% degradation was observed when the drug was refluxed at 80° using 2 N NaOH for 5 h, (Figure 4). No degradation was observed when the drug was subjected to neutral hydrolysis. But oxidative degradation using 30% H2O2 at normal room temperature was carried out, the peak area was reduced from the normal value, this may be due to the formation of N-oxide. No degradation was seen in solid drug maintained at 80° for 8 h in a hot air oven. Results proved that the degradation of roflumilast was more pronounced under acidic hydrolytic condition than alkaline condition. Summary of the data for all forced degradations is given in Table 4. Peak purity test suggested that the roflumilast peak as well as the peaks of degradation products were pure for all the forced samples analyzed. No additional peak was observed in chromatograms obtained for the extended runtime of 25 min in a sample study.

Figure 3: Chromatogram for acid hydrolysis of roflumilast
Chromatogram showed drug peak at 0.54, which was well resolved from the degraded product at 0.26

Figure 4: Chromatogram for alkaline hydrolysis of roflumilast
Chromatogram showed drug peak at 0.54, which was well resolved from the degraded products at 0.26 and 0.46

A linear relationship was obtained by plotting log concentration of roflumilast remaining against time. K value was obtained by graphical method (Figure 5). Since the hydrolysis was performed in a large excess of 2 N HCl, it can be assumed as pseudo first order reaction rate.

The developed HPTLC method was found to be sensitive, precise, robust, accurate and rapid. Summary of validation parameters for the estimation of roflumilast by the proposed method is given in Table 6. It can be concluded that the proposed validated stability indicating HPTLC method could be employed for the routine quality control analysis and also extended for the prediction of shelf life of formulation containing roflumilast.

The authors would like to thank the Tamilnadu Welfare Trust for selecting the work to receive the merit scholarship and SNR Sons Charitable Trust, Coimbatore for providing the necessary infrastructural facilities to perform this study.

There are no conflicts of interest mentioned.