Myocardial infarction is one of the major diseases that threaten human health[1,2]. With the clinical application of reperfusion treatments such as percutaneous coronary intervention, thrombolytic therapy and coronary artery bypass grafting, although the myocardium blood supply of patients has been recovered, myocardial ischemia reperfusion injury (MI/RI) would still occur[3,4]. MI/RI is the severe pathophysiological changes of ischemic myocardium after reperfusion treatment, the programmed myocardial cell deaths caused by MI/RI often considered to be necrosis[5]. However, research has shown that apoptosis occurs in MI/RI as well, whose development is regulated by various genes; in addition, based on the comprehension of ischemia pre-adaptation protection mechanism, the myocardial pharmacological pre-adaptation mechanism has been proposed[6].

Myocardial pharmacological pre-adaptation refers to the process of stimulating or simulating the organism to release protective substances thereby protecting the myocardium through simulation of myocardium ischemia by directly or indirectly functioning on signal transduction pathways. Acanthopanax senticosus (ASS) whose major active component is the root and vine, is also known as manyprickle acanthopanax. Published reports showed that root and vine of manyprickle acanthopanax could simulate the pre-adaptation of myocardial ischemia, which would have certain protective functions on MI/RI. Opening of ATP-dependent potassium ion channel is one of the key mechanisms of ASS is to cause pharmacological preadaptation. The ATP-dependent potassium ion channel is an important effector of the transduction pathway of ischemia pre-adaptation signals[7].

A total of 60 healthy male SD rats (weighing 250 ±20 g) were randomly divided into 4 groups, with 15 rats in each group and the treatment chosen was acanthopanax senticosus (ASS). The reagents used were the extracellular regulating kinase (ERK) 1/2 reagent kit, the KeyGEN TUNEL apoptosis in situ detection kit, and the protein kinase B kit. Equipment used was the automatic biochemical detector, the HC-3018 high-speed refrigerated centrifuge, the MCE-1000 electrocardiograph (ECG) monitor, and the DH-150 animal ventilator. Rats in the sham-operated group were given thoracotomy without ligation; while rats in the other 3 groups were given thoracotomy and ligated to establish the myocardial infarction model.

After completing myocardial ischemia and reperfusion, hearts were immediately excised, rinsed with 0.9 % sodium chloride and blotted dry. Left ventricles and the interventricular septa were kept. Rat myocardium from the cardiac apex to the ventricular base was cut into 2 mm-thick tissue slices, which were placed into the NBT (0.5 g/l) solution for staining in a thermostatic water bath at 37o; 15 min later, the tissue pieces were taken out, rinsed and dried. The infarcted myocardium was unstained, while the normal myocardium was stained violet-blue. The proportion of the weight of the infarcted myocardium to the total weight of the left ventricle was calculated to determine the extent of myocardial infarction.

The TUNEL assay was used to determine the apoptotic index (AI). Rat hearts were removed after MI/RP and the ischemic myocardium was cut and fixed with 10 % neutral formaldehyde for 48 h, the myocardium was embedded with regular paraffin and the terminal deoxynucleotidyl transferase dUTP nick end labeling (TUNEL) assay was performed. Under the optical microscope, the nuclei of normal myocardial cells were in the color of bluish green, while the nuclei of apoptotic cells were in the various shades of brown. Three sections of each rat heart were selected and 5 high power fields (HPF) per each section in the distribution area of apoptotic cells, the average number of apoptotic cells out of 100 cells were calculated, and the AI was expressed as percent.

The Western Blot assay was used to detect the expression in ERK1/2 and phosphorylation ERK (p-ERK) 1/2. A total of 0.1 g of frozen myocardial tissue was added to 1 ml of protein extraction liquid, homogenized, protease inhibitor was added in the ratio of 1:100 and supernatant was obtained after centrifugation. Coomassie Brilliant Blue assay was used to determine the volume of protein, which was 3 g/l, and the supernatant was kept at -80o. The supernatant was used for electrophoresis and membrane transfer, blocked for 120 min with 5 % skimmed milk powder at 37o. Following these steps, diluted mouse antirat p-ERK1/2 monoclonal antibody was added in the ratio of 1:800 for hybridization and kept overnight at 4o. The membrane was then washed thrice with TBST washing solution, 1:1000 diluted goat antimouse second antibody, incubated for 120 min at 37o, washed thrice with TBST washing solution, filtered and allowed to dry. The chemiluminescence reagent kit was used in accordance with the specifications of Western Blot kit, and the corresponding absorbance values were recorded.

The rats were heparinized, and anesthetized with 1% sodium pentobarbital administered intraperitoneally, the hearts were quickly removed and placed in 4o calcium free Krebs Hanseleit (K-H) solution to stop beating. The aorta was slightly trimmed, and connected to the Langendorff perfusion devices within 3 s and perfused with 95% CO2 and 5% CO2 saturated K-H buffer (pH 7.4) made up of NaCl 120 mM, KCl 4.7 mM,CaCl2 2.25 mM, KH2Po4 1.18 mM, MgSO47H2O 1.2 mM, NaHCO3 24.5 mM, glucose 11.1 mM and ethylenediaminetetraacetic acid 0.03 mM. The perfusion pressure was kept at 75 cm H2O. Each left auricular appendix was cut open and a catheter with a balloon connected to a biological signal recorder was inserted into the left ventricle; the heart was immediately placed in the 39° thermal container. After the cardiac beating was restored and stable, the balloon was slowly inflated with 0.9 % sodium chloride solution, and the left ventricle end diastolic pressure was regulated to 4-10 mmHg. The T-directions of isolated hearts were changed and the constant current mode was shifted to constant voltage mode for perfusion. After 15 min of balance, group C was continued to be perfused with K-H solution for 10 min; then, the perfusion of all heart was paused for 25 min, and the perfusion was continued for another 30 min; in terms of groups P1, P2, P3, and P4, after 15 min of balance, they were perfused for 10 min with K-H solution that contained required concentrations of ASS and the followed treatment processes of ischemia and reperfusion were the same as in group C. Once the constant pressure perfusion was balanced, the hearts whose heart rate (HR) was <200 beats per minute and the left ventricular diastolic pressure was < 75 mmHg with at least 2 premature systoles per minute were discarded. The continuous ventricular fibrillation that lasted over 5 min during the ischemia or reperfusion indicated myocardial death.

Once the above processes were finished, the indicators were observed. The MP150 16-pathway physiological signal record and analysis system was applied to record the left ventricle end diastolic pressure (LVEDP) with 30 min of balance end and reperfusion, the left ventricle diastolic pressure (LVDP), the maximal rate of contraction of left ventricular pressure (+dp/dt max), and the maximal rate of relaxation of LVEDP (-dp/dt max), in addition, the coronary artery outflow (ml/min) at the above nodes were collected Table 1.

Table 1: Size and Weight of Myocardial Infarction in 3 Groups

The SPSS 10.0 statistics software was applied to analyze the research results of both experiments; all the data were expressed as mean±standard deviation. The group comparisons were analyzed by one-way ANOVA, and P<0.05 indicated the statistical significances of the differences.

Compared to the IR group and the ASS+Z group, the effects of ASS on the extent of myocardial infarction were mainly manifested as a decrease of both the infarcted myocardium weights and the proportion of infarcted myocardium to total left ventricle mass in the ASS group, as shown in fig. 1. 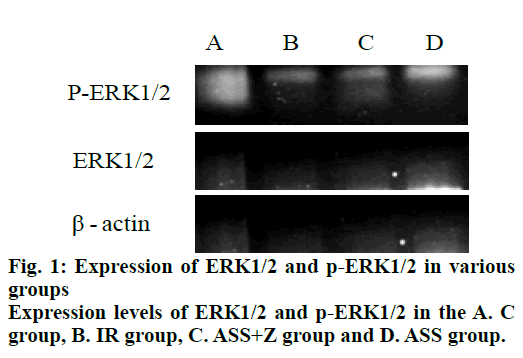 Compared with the IR group and ASS+Z group, the effects of ASS on serum cardiac troponin T (cTnT) and myocardial cell apoptosis were mainly manifested as a significant decrease of cTnT and AI. However, the levels of cTnT and AI in the ASS group were still higher than that in group C. The comparisons of cTnT and AI values of rats in all 4 groups is shown in Table 2.

Compared to groups C, IR and ASS+Z, the effects of ASS on ERK1/2 signal transduction pathway were mainly manifested as higher expression levels of p-ERK1/2 in the ASS group; the changes in RD of ERK1/2 of each group were unapparent; the RD of p-ERK1/2 in ASS group was significantly higher than that in group C, group IR, and group ASS+Z. Results were indicated in fig. 1 and Table 3.

Table 4: Changes of Heart Function at the End of Stabilization and 30 Minutes after Reperfusion

Figure 2: Changes of CF at the end of stabilization and after reperfusion.

In addition, further research was also performed for the better clinical application. The Langendorff Isolated Heart Perfusion Model was applied. Research results showed that the improvements of LVDP, +dp/dt max, and -dp/dt max in groups P2 and P3 were all better than that in group C. The results have proved the preadaptive effects of ASS on strengthening the systolic and diastolic functions of the left ventricle after reperfusion; however, different dosage concentrations had different dose-effect relationships, in which the protective effects of 40 mg/kg ASS and 60 mg/kg ASS on myocardial ischemia reperfusion injuries of rat isolated hearts were the strongest.

In summary, numerous experiments have proved the effects of traditional Chinese medicine (TCM) on protecting vascular endothelial functions, improving the hemodynamics, and reducing the ischemia reperfusion injuries, etc. Based on the TCM theories, as well as combining the modern scientific research methods, the protective effects of ASS on MI/RI has been investigated, and its mechanism has been explored, which is of great significance for the prevention and treatment of coronary heart diseases and the development of clinically effective drugs for reducing MI/RI.